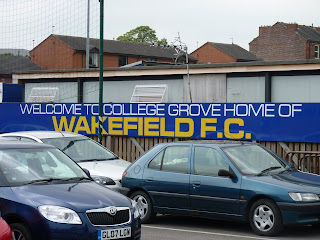 I’m sitting on the patio with the sun beating down on me. My best friend in the world, Finley Palmer, is laid under my chair pondering his next crap score prediction. Mrs P is sipping on a Pimms and lemonade, whilst reading Alan Sugar’s autobiography. “Where do you fancy going Friday?” says Sticky Palms, suddenly realising we can spend a rare day together.

“I could drive out to “Carsington Water, we could have a pleasant stroll, and then maybe grab some lunch up in the Peaks?” “No thanks”, replies Mrs P. “Eh? You’re turning down a romantic day out with your husband.” “Yeah, that’s right; I’m off to a Royal Wedding party at my sister’s house.”

I lift myself out the chair, scamper into the house and fly up the stairs. The Non League Paper catches my eye on the bedside table. I lick my index finger and flick the pages towards Friday’s fixture list. Evostik Division One North: Wakefield v Curzon Ashton at College Grove, ‘Wakey’s’ final ever game at this venue, 3pm kick off. 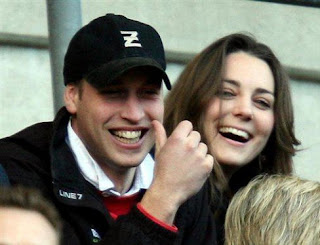 I fumble in my pocket for my mobile phone. I hastily scroll through my contacts, frantically looking for the letter ‘T’. I press the green button. A man answers. He sounds like he’s in a public house. I can hear the till ringing, glasses chinking and music in the background.

I saunter back onto the patio with the smuggest of looks. I’m putting my tracksuit top on and my Notts County baseball cap. “Where you going?” says Mrs P poking her head over her book. “I’m nipping down Clifton to watch Boots clinch the NSL championship.” 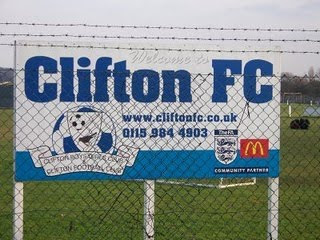 I pull into Green Lane. It’s a blustery old evening, but a cracking turnout for a school night. Clifton have a wind-assisted first half. They lead by a goal at the break. In all honesty it should be two or three nil.

There’s no sign of Boots legendary secretary Dick Durrant. I give him a call. Apparently he considers himself a bad omen for midweek fixtures. He’s holed up around the corner, awaiting the final whistle and hopefully a draw or win.

Boots grab an equaliser and bag the title. Big D appears on the scene. He’s armed with Cava. It’s sprayed and wasted as this great club celebrate. I like them a lot, as I do Clifton. I leave them to it. 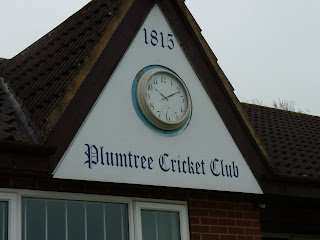 It’s Friday morning. I’m full of cold and have a hacking cough. I’m a man of honour and won’t let Trumpy down. I nip down Bradmore Lane to the picturesque setting of Plumtree Cricket Club, who play at the back of the Griffin Inn.

‘The Skipper’ is playing against Unity Casuals, who were once a nursery club for Nottinghamshire County Cricket Club. Mick Newell, Andy Pick and former England off spinner Peter Such have all played for Unity.

I shoot up back to Keyworth to pick up the Legend. He just has a large bottle of Gaymer’s cider for company today. 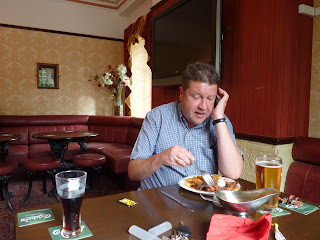 We’re both hopping mad. Ken Bruce’s Pop Master has been cancelled for the day because of that bloody wedding. We’re channel hopping on the radio. The only station with music on is Capital. Not on your Nelly are we having that on. We have a chat instead.

Trumpy can’t remember leaving the kids birthday party last week. He was like a Charlie Chalk celebrity with the children. ‘The Skipper’ and Sticky jnr are always hounding him for an autograph.

He’s making final preparations for his Sun Holiday in North Wales next week. He has a string of pubs lined-up. Headquarters is a caravan on a cliff top in Abersoch. 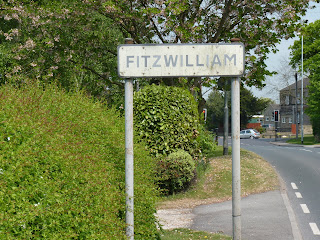 Trumpy has little recollection of a birthday party he went to in Blaby in Leicester on Saturday. Although he does recall having a conversation with Kasabian lead singer Tom Meighan. I would have paid to listen to that little chat.

The motorway is empty. After a stop for petrol, we’re soon rolling into the car park of the Catchpenny, in the village of Fitzwilliam in Yorkshire. Cricketer and radio pundit Geoffrey Boycott was born in the village.

We’re greeted by a buxom auburn-haired barmaid with an orange glow. Trumpy has a cider and I have a Diet Coke. The bar food is simple, unpretentious and great value. I have hot dog, onions and chips for £3. 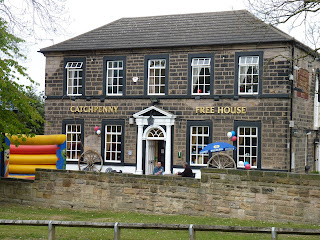 Trumpy and the rest of the bar are captivated by the Royal Wedding. There’s a huge cheer when the Royal Couple kiss. I’m too busy on the phone addressing issues at Notts County to bother about all this tosh.

Trumpy waves goodbye to the Yorkshire-tanned barmaid. We’re soon in the town centre of Wakefield and parked up right outside the turnstile at College Grove.

Wakefield is a city in West Yorkshire, on the edge of the eastern Pennines. It has a population of over 70,000 people. It was once famous for glass, textiles and coal mining. It’s an area once again decimated by the Conservative Party’s pit closure programme. 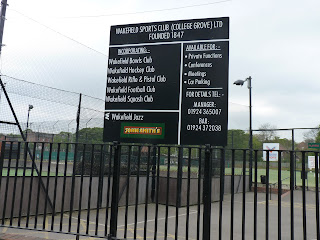 There’s a bit of a commotion at the turnstile. The guy on the gate has run out of fifty pences and is well stressed. He’s not enjoying Trumpy’s humour. I’m not happy either. It’s 2.15pm and they have already run out of programmes. Entry is rather pricey £7.50.

I’m immediately taken aback with the huge slope on the College Grove ground. Behind the nearest goal are the club offices and bar. Trumpy is straight in for a pint of John Smiths which has him pulling a face, like he’s sucking on a lemon.

The legend immediately goes into one, ranting that his pet hates in life are: Sarah Cox, Peter Tatchell and Alex Salmond. 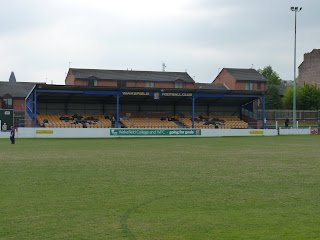 There’s a large stand running along one side of the ground, which has yellow tip up seats. We stand on the concrete steps above the Curzon Ashton dugout. Their manager is decked out in a club tracksuit but strangely chooses to sports a pair of black shoes.

The pitch is one huge dustbowl. Everytime someone is tackled a huge cloud of dust appears, as if Starsky and Hutch or The Sweeney have pulled into the car park. The game is dire. I enquire if Curzon have rested a few for their play-off game on May Day Bank Holiday. 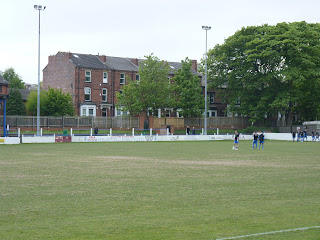 Nobody appears to be in a particular good mood, me included, with my runny nose and irritating cough. One solitary fan stands behind the goal. I sarcastically ask him if this is the ‘Away End.’ “Not a clue youth”, is his reply.

I meet a groundhopper from York, who is taking photos from the most elevated view in the ground. I engage in conversation, but I’m quite clearly boring the bloke to death and interrupting his passion for photography.

The one moment of quality happens on 40 minutes. A quick free kick finds Curzon forward Daniel Broadbent in space. He allows the ball to bounce once before thumping a shot over Czech ‘keeper Jan Zolna and into the net. 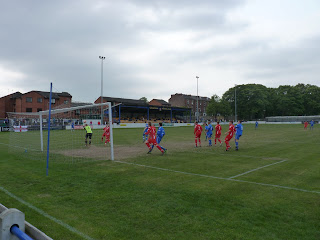 I stop a chap with an AFC Bournemouth replica shirt on and ask him what the heck he is doing here. He’s on his way to Hartlepool v the Cherries, which is being played tomorrow. The guy’s a proper hopper and has a series of games lined-up this weekend. He intends stopping at his stepsister’s in South Shields for a few nights.

Trumpy is opened-mouthed and aghast with the list of games the guy intends to go to. West Yorkshire cup ties, Level 7 fixtures in the north east. “It’s only like that stupid pub ticking-off game that you play” I remark to the Legend.

Plumstead rapper Tiny Tempah is on in the bar, obviously not live, just one of his daft toons. Trumpy downs another bitter. Sticky Palms is that racked off even he drowns his sorrows with a pint of Stella.

You can’t blame the two teams; it’s the pitch that is beating them. Wakefield’s Number 7 shows flashes of brilliance, but nobody really catches the eye apart from Broadbent’s brilliant first touch and movement. 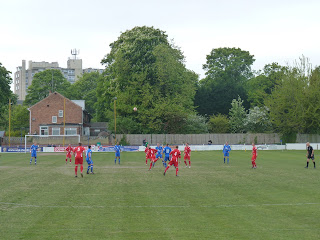 Trumpy has got his eye on Wakefield’s physio ‘Carol.’ She has blonde hair and is extremely attractive. “I’d be going down with a groin strain every five minutes if I was a player”, remarks Bolton.

We stand near the exit as the game peters out. A couple of groundhoppers are comparing notes of stadia in the Manchester area. It’s all too much for Trumpy. I can’t half pick em readers.

Man of the Match: Bournemouth Groundhopper.
Posted by Sticky at 7:50 AM

Give Curzon a shout - they need all the support they can get :-)

Not wrong there mike...

Not wrong there mike...

What's up to every one, since I am in fact keen of reading this webpage's post to be updated
regularly. It includes pleasant stuff.