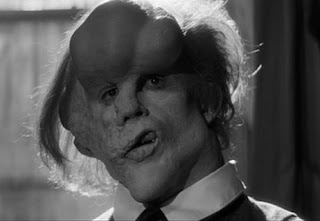 It’s Friday night and I’m on a leaving do in West Bridgford. Swatts is leaving Ergo Computing after 8 years as Marketing Manager. It’s a good turnout, all the old school are here. Taggart has made an appearance; he normally gets himself in a right two and eight. Last time, following the Ergo Strictly Come Dancing Christmas Party held at the Nottingham Council House, he got so pished that he fell into a taxi and ended up in KEGWORTH rather than KEYWORTH. He is a real character though and from Glasgow.

It’s 10pm, I’ve had six pints of Yorker from the Leeds Brewery, I feel more off balance than Ronaldo. I had a George Best undercoat before I came out (a pint of milk) but it’s made no difference, I feel terrible. There’s mutterings of us going to the Monkey Tree or some other dreadful dive (Fire n Ice) I bail out and catch the bus home, I’ve a big day out in Shirebrook tomorrow.

Mrs P is having her hair done, that’ll be a financial blow. I leave the kids playing cricket in the back garden with strict instructions not to hit the ball into George and Mildred’s garden.

One of junior’s friends accidentally smashed their greenhouse a few months ago. The Cockney geezer came racing round; he talks like Inspector Blakey off On the Buses. I was all apologetic, but he told me the kids shouldn’t be playing cricket in the garden and threatened to report us to the Rushcliffe Noise Abatement Society. Unfortunately I had partaken in a couple of Stella’s. The conversation was short and sweet. It’s a family blog and I can’t repeat what I said, and we haven’t spoken since. 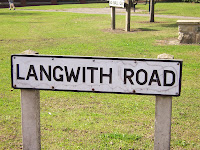 I’m driving down the A60, according to radio reports the M1 is clogged up with traffic. I skirt round Mansfield and head towards Worksop. Radio Nottingham are interviewing Stags’ manager Billy McEwan. It suddenly dawns on me that all Nottinghamshire’s big clubs are managed by Scotsmen. They’ve made the long haul up to Barrow Town’s Holker Street; I’ve been there myself.

Shirebrook is another community decimated by Mrs Thatcher’s pit-closure programme. I was saddened to hear that she now has senile dementia; at last she will have forgotten the wicked things she has done.

Shirebrook is in the north-east district of Bolsover, Derbyshire and has a population of 10,000. Famous people from the town include: Elephant Man actor John Hurt and England World Cup winner Ray Wilson. 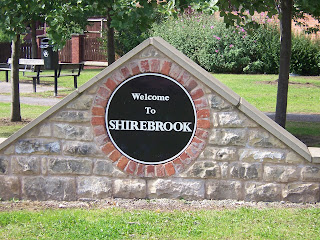 According to Wikipedia it has The Auctioneer’s and my favourite shop the Co-op. I have a quick drive round but I’m unable to find the Co-op. The streets are deserted, a few pubs have shut down and many premises have 'To Let' signs outside their windows. It’s not unpleasant or scary, it’s just a bit of a ghost town.

Shirebrook Town Football Club were formed in 1985 and play on Langwith Road, at The Staff Ground. It’s £5 admission and a further £1 for a programme that has fallen apart due to a lack of staples. I remember legendary groundhopper Richard Panther complaining that the same thing happened to him in his wonderful book 'Dennis the Astronomer.' The content of the programme is good.

The pitch does not look in particularly good nick. There’s more weeds and clover than on my back lawn. It has plenty of humps and hollows and the grass is dead in parts. 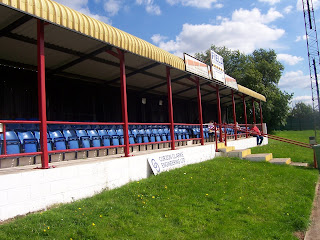 On one side of the ground are two large stands seating around 400. The seats are the blue tip up type from the old Carling Stand at Leicester City’s Filbert Street ground. On the opposite side is a covered area. Behind both goals are two small grass banks. Lots of the buildings appear to be portakabins. The ground is railed off and fenced off.

The droning and irrating Adrian Durham from Talk Shite bellows out from the Shirebrook speaker system. He is ably assisted by the dulcet Black Country tones of Stanley Victor Collymore who has taken an afternoon off from ‘walking the dog.’

It’s a beautiful summer’s day with a gentle breeze. I’m hungover and dehydrated, so I buy a bottle of fizzy orange from Marilyn’s Cafe.

Shirebrook Town are in disarray. The management team have resigned following two league defeats. It’s a situation shrouded in mystery. There’s a short announcement on the web site but no mention of it in the programme. No-one wants to talk about it; the silence is deafening. 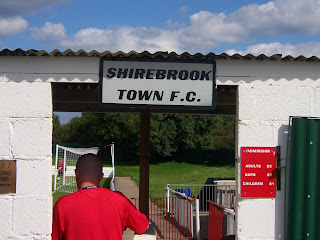 Another strange thing has happened, last season’s Northern Counties East leading marksman Ant Lynam (44 goals) was signed from Dinnington by the club in the summer. Apparently he wouldn’t or couldn’t train and has since been released. There’s a bit of a Royston Vasey feel to the place. They’re lapping all this up on the unofficial Northern Counties fans’ forum.

Bridlington is a seaside resort in the East Riding of Yorkshire and has a population of over 30,000. Footballers Richard Cresswell and Craig Short were both born in the town. Notts County have never had a better centre-half than Short; he was a class act.

I went to Brid a few years ago with our kid, and to be honest quite liked the place. We walked around Sewerby Park and Gardens on a beautiful Bank Holiday Monday, had a couple of hours on the beach and ate fish and chips on the sea front. We had a stroll around the harbour; it was full of people wearing Sheffield United and Barnsley shirts. 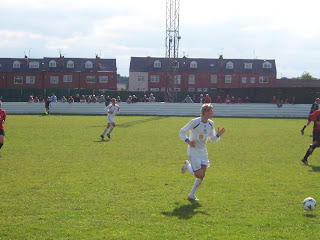 Bridlington Town were relegated from the Unibond Division One North last season, and are favourites to bounce back up again.

Both teams won their FA Cup qualifiers last weekend so confidence should be high. Bridlington have a very enthusiastic warm-up routine. They look self assured and confident. There’s a lot of high fives and back slapping going on. They look a tight-knit group.

Three Bridlington WAGS walk through the gate, White Van Man would have been having kittens over these three; they are worth the gate admission alone.

I get my first touch of the ball on thirteen minutes and throw the ball back to the Shirebrook full-back. The home team begin the game brightly and play with two wingers. 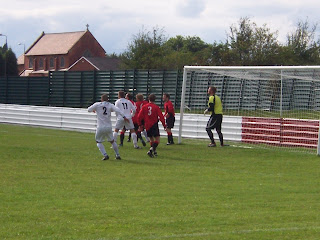 Shirebrook Town surprise me in the first period; they play a lovely passing game. Their star perfomer is 17 year old left winger Adam Kimberley. He takes on the entire Bridlington defence; he twists and turns, sidesteps and jinks. No offence, but he can clearly play at a higher level than this.

Brid’s tall centre midfielder Ashley Allanson opens the scoring in the 25th minute. He’d had a sighter scream over the bar moments earlier. He doesn’t make the same mistake from 20 yards out, although the ball is helped in following an appalling howler from Shirebrook ‘keeper Gavin Saxby. The passage of passing before the goal is breathtaking.

The defining moment of the game happens shortly before half-time. The Shirebrook centre half had been previously been cautioned for handball or kicking the ball away, I’m not sure which. He commits a dreadful challenge in front of the away dugout and Sticky Palms. He receives another yellow and is off. An amazing row occurs between the Bridlington manager and a spectator, who accuses him of getting the player sent off.

At the break I seek out the social club, to see what else is happening in the football world. Ping pong is on the television; these Chinese are nowhere near as good as The Nuclear Scientist and I. 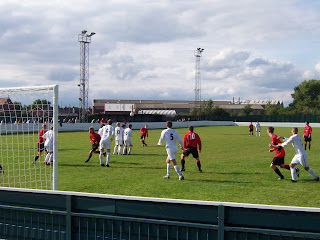 The winning raffle ticket number is shouted out, I’m only a few numbers out, but have yet to break my duck. It’s a cash prize too; that would have cheered up Mrs P.

I’m leaning on the rail waiting for the players to re-start when one of the gorgeous Bridlington WAGS comes and stands next to me. She’d look more at home auditioning for a girl band on the X-Factor than standing watching her fella play football. She’s sexy, slim and swigging Fanta orange. Her perfume is overpowering. It’s all too much for The Groundhopper, he scarpers round to the other side of the ground.

Shirebrook battle away magnificently with just the ten men. “We’re getting overrun” shouts the Bridlington 10 jacket to the bench. But apart from a couple of Brady efforts they rarely test the visiting keeper;

Tricky winger Nathan Watson was sacrificed at half-time for another defender. The guy that comes on is older than me. In his heyday he was probably a good player.

Unselfish play from Phil Harrison leads to a fortunate goal for Chilaka; it takes him two attempts following a brave block from Saxby.

Bridlington are now rampaging down the right hand side and the Shirebrook sub is working overtime. The goal of the game comes on 72 minutes Craig Palmer thumping a header home following a fine cross from the right. Palmer has looked fairly disinterested for most of the game and only appears to come alive with the ball at his feet. He repeats this feat on 84 minutes with a glancing header from another right wing cross.

Shirebrook hit the bar in the dying moments, but it’s all too late.

By this time I’m chatting with a big fella from Brid. He used to live in Cotgrave for twenty years; it’s a village four miles from my home. He’s telling me to get up to Brid Town’s ground as the pitch is like a billiard table. I just might do that.

Man of the Match: Ashley Allanson
Posted by Sticky at 10:03 PM

Dissapointed to see you calling me again sticky! Ive only got one thing to say to you - david livingstone african explorer,billy connolly world tour of new zealand,ewan mcgregor long way round...like all great scots i always find my way home - i was merely taking the scenic route..taggart out!

Is that a picture of Taggart I see at the start of this piece??!!

at least you can understand john merrick