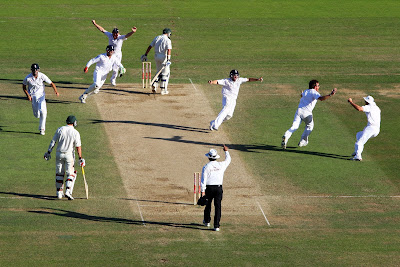 ‘The Skipper’ is open-mouthed. He gazes up at him. He tries to speak but his tongue is dried up and tied up. He’s totally and utterly star-struck. He’s never met anyone, in his short life, of such legendary status. He walks across to shake his hand. “‘Are you ‘The Skipper?”, enquiries the elderly man. “Yes” stammers a startled ‘Skipper.’ He signs an autograph or two and bids us farewell.

‘The Skipper’ does nothing but talk about it for the rest of the evening. Mrs P and Sticky junior are green with envy. He’s the talk of the town. People want to pose for a picture with him. He has cult status on this blog. That’s right folks, ‘The Skipper’ has just met …… wait for it … Trumpy Bolton. We dropped him off in the Keyworth Tavern car park on our way back from Collingham. 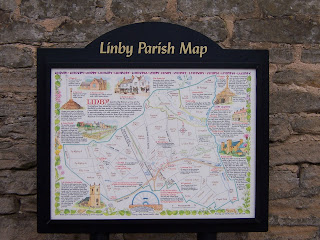 In years to come the inevitable question will be asked: Where were you when England won the Ashes in 2009? Well, I was at my brother-in laws. Regular readers will know there is a bit of history between the two of us. It’s nothing personal. Life has dealt him a cruel hand. He’s a policeman. He supports D***y County. He reads the Daily Mail. He likes rugby union. Do you get my drift?

Mrs P is approaching the big forty. We’re having a shindig to celebrate. I have to say she blossoms with age. They often tease me at work that I’ve punched above my weight.

She came back from the hairdressers on Saturday afternoon with a classy hair-do. The Groundhopper made a polite enquiry about the cost of the scissoring and blow-drying. Let’s put it this way readers, I could watch ten Central Midland League games for the price of a perm. 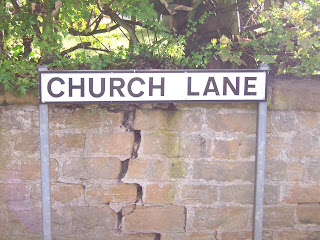 Well, I’ve finally met Sven. Our paths crossed last Sunday morning at Arnold Town’s Eagle Valley Stadium. The Notts County junior teams were all playing down there. He looked relaxed, with his jumper draped over his shoulder. I’d got my kit on. He strolled over to me and shook my hand. I mumbled to Sven about being a scout. I was going to ask him who he thought might win the X-Factor. But I didn’t want to spoil it for him. Perhaps he Sky Plussed it. It was a surreal moment. He was the perfect gentleman though, during our brief encounter.

I didn’t get back home from Arnold until 3pm. The reception was a cool one from Mrs P. I mowed the lawns and kept my head down for the rest of the day.

Mrs P fails a late fitness test. I have to drop the boys off at Gedling Colliery Cricket Club, en-route to Linby. There’s no time for tea. Mrs P nipped into Marks and Spencer, whilst on a shopping spree in town, and bagged The Groundhopper a triple decker sandwich. 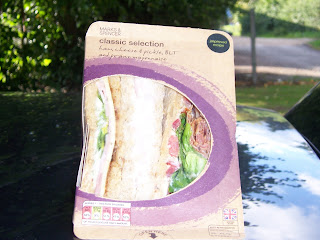 There’s a four car shunt on the Colwick Loop Road, involving two Porsches. We’re subjected to Sticky junior’s iPod. The music is morose. We have Jeremiah, Flo Ryder and Chipmunk blasting out the speakers. Where’s Heart FM when you need it?

I kick the pair of clowns out the car on Mapperley Plains. They have bored the pants off me for the entire journey. I wish them good luck.

I’m proud that the little un is playing three years above his age group. I’m riddled with guilt that I’m not supporting them, but I need to tick off Linby Colliery Welfare’s ground. Black clouds are circulating but I’m confident their game will go ahead. They’re both playing for Plumtree under 14s. 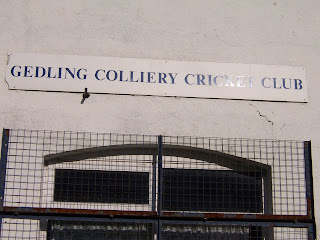 There’s a heavy shower as I turn off the A60 and pass the Griffin’s Head pub at Papplewick.

Linby village is picture-postcard. Sticky used to roll up at Linby Colliery, for ‘work’ nearly 30 years ago. They were halcyon days. We used to play dominoes and crib in the Horse and Groom at lunchtimes. I had summer holidays away with the surface electricians in Ibiza, Corfu and Tenerife.

I pull up in the pub car park and pop in for a soft drink for old times’ sake. Nothing has changed about the place except that it has six real ales on hand pump. Two blokes are sat in the corner. One of them can moan and groan more the entire Kinsley Boys FC 1st team. And trust me, that takes some doing. As I head towards the ground, I notice the dark skies lighten. A rainbow illuminates the village. A Sparrow Hawk hovers above some wasteland, searching for prey.

I miss the entrance to the ground. I’m guided back in by a retired miner.

Linby is a small village near the town of Hucknall. It lies on the River Leen. It won the Best Kept Village in Nottinghamshire Award in 1997. Football has been played in Linby since 1903. 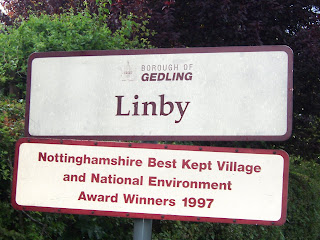 November 1950 saw Linby entertain Gillingham in the FA Cup 1st round (proper) in front of a record crowd of 6,850 at the Old Gatehouse ground. In 2005 the Club achieved FA Charter status.

There’s no admission fee and sadly no programme, although I’m led to believe that they do issue at a weekend.

The ground is picturesque. It’s outstanding feature being the towering St Michael’s Church, which dates back to the 13th Century. 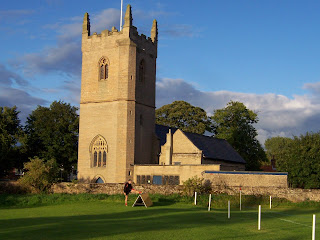 The game kicks off with Church Lane bathed in glorious evening sunshine. It’s like a playground scrap in the first 20 minutes as both teams take time to settle. Everything seems rushed and hurried. No-one has the nous or inclination to put their foot on the ball. The game is narrow and without quality.

I get a call on ten minutes from Sticky junior. Their game has been rained off. Alternative arrangements are made to get them home. Somebody else can put up with their crap music on the iPod.

Linby mess up a good free kick opportunity, when Attenborough are penalised for a back pass. The set-piece is way too intricate. Boro’s Stephen Oldham fires into the side-netting when handily placed. 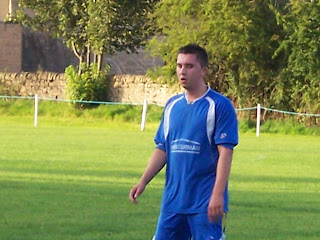 Boro are on the referee’s back in the early stages. “There’s two teams playing you know ref” pipes up one of their players.

A member of the Linby coaching staff is not impressed with the game and asks for my thoughts. I tell him I’m enjoying it. The match is pure, real and honest. It’s grass roots.

Jonty ‘The Yo Yo’ Bradshaw provides some width for Linby. I call him a Yo Yo, as he seems to leave this club at the drop of a hat but always returns. His feet are good and so is his radar. In the 35th minute he plays in Julian Wright down the flank. He manages to get his cross in, despite being pole-axed. Keetley comes steaming in to smash an unstoppable shot, off the inside of the post, into the back of the net. 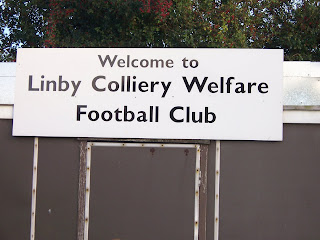 Attenborough get no reward for their passing game, and are unfortunate to be down at the break. I saw their beautiful game desert them when the going got tough at Awsworth Villa, a year to the day.

They’ve proper got the hump with ref for turning down a penno. It looks like the linesman’s call from where I’m standing.

Barthez texts in live from Elms Park. Ruddington are beating Keyworth 1-0 in the local derby. 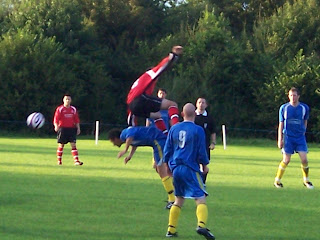 I mooch on over to the clubhouse for a cuppa. The lady is performing what is known in the tea trade as a re-brew. The pot is poured to perfection. It receives the highest mark of the season: an 8.5.

Attenborough restore parity on 50 minutes. Stephen Oldham can hold up play and pick a pass. He’s deceptive and has a turn of pace. His lack of aggression and movement off the ball let him down though. He spins his marker and strikes the ball goal wards. It somehow beats the ‘keeper on his near post. Wright and McDermott play as a partnership. McDermott is sent racing away down the wing by Wright. He cuts inside onto his left foot, and hits a delicious, curling shot into the bottom left hand corner of the net. It reminds me of Peter Beardsley in his prime at Anfield.

Boro are deflated and punch drunk. They don’t have the pace and counter-attacking skills of Linby. They begin to look sluggish and take an age to pass the ball. A goal is pulled back with the mostly anonymous Andy Johnson lookalike, Dave Constable, miscuing his shot into the net. But it’s too late, as the referee, moments later blows for time.

Man of the Match: Clubhouse teapot

Thanks for popping down the Lane. Hope you managed to pick up a programme. Our match report can be seen here

What did you think of my passing and moving last night ground hopper ? Different gravy or what ?

Not bad Jonty lad. Thought you gelled your hair up nice too. Is Wella Shockwaves or VO5?

There were 15 programmes all unsold in the clubhouse. Want a copy sending?