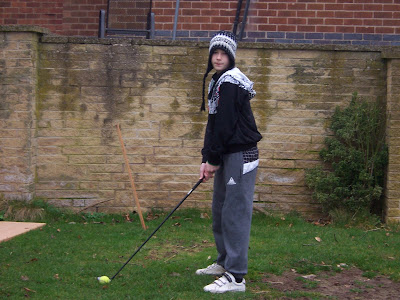 We had a trot down the local football club on Sunday to watch Sticky junior in action. They were playing the league leaders. We kept the score down to a respectable 3-0 thanks to the efforts of our goalkeeper, who is proving to be the find of the season. Sticky’s got alleged growing pains at the minute, he doesn’t look particular interested according to his Dad though. 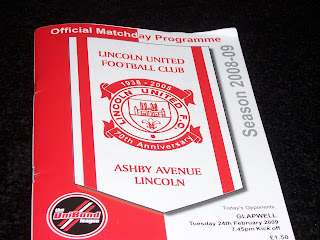 Sunday afternoon was spent with The Nuclear Scientist down at Greenwood Meadows Lenton Lane ground. It was an FA Carlsberg Sunday Cup game between Scots Grey and an Irish Centre from Huddersfield way. It was a cracking game that had the lot. Greys were 2-1 up with 15 minutes to go when the visitors were awarded their second penalty of the afternoon. The youth who took it skied the ball into orbit and it ended up on the second tee of the adjacent pitch and putt golf course. It was nearly three off the tee. Greys won 3-1 and are in the semi-final. The final is due to be played at Liverpool’s Anfield.

I had to take Monday off as the kids were on an inset day and ‘The Skipper’ is a wee bit too young to leave on his own. The pair of them have been plaguing me to go golfing again. We went down to the municipal course at Edwalton. It’s a scruffy old par 3 course; perfect for them (and me). 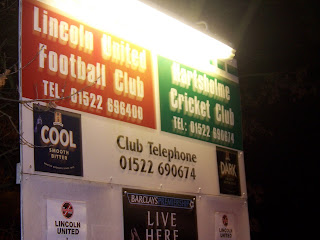 The 4th hole is about 170 yards. Sticky junior had been shanking and slicing the ball all day, just like Forest goalkeeper Paul Smith. He scuffed his drive about 60 yards down the fairway. He hit his second shot with perfect trajectory straight into the hole from fully 100 yards; it made his day.

I’ve been trying to get one half of the Fabulous Baker Boys to come groundhopping with me for a couple of years now. I finally pin him down for the Lincoln versus Glapwell game.

Bobby is a successful sales manager in the playground surfacing business and drives a Mercedes; he volunteers to pilot. 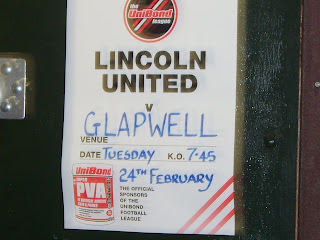 It’s 6.30pm when we finally leave. The Groundhopper is going home. It’s ironic that I’ve seen Lincoln United play more times this season than the team I support, Lincoln City.

We drive down the notorious and dangerous Fosse Way. This road was completely blocked the night before with two bad accidents. We snake our way through East Stoke, Farndon and hit the Newark by-pass. We are in Lincoln, my hometown, within 15 minutes as Bobby puts his foot on the gas.

He has got Scott Mills’ Radio One show on the car stereo. We’re too busy catching up with one another to listen to all his gags. 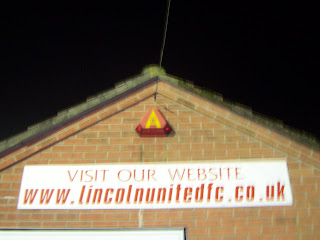 I’ve so many fond memories of this city that I moved away from 40 years ago. Visiting my Grandma and Grandad’s in school holidays. The endless trips to Sincil Bank to watch the brilliant teams that Graham Taylor and Colin Murphy assembled in the 70s and 80s.

Ashby Avenue is situated in a lovely setting but is dwarfed by an ugly, huge block of high rise flats. The ground is a mass of conifers and leylandlii, which provide shelter on what is a fairly mild and still night.

Lincoln is a cathedral city with a population of just over 100,000 inhabitants. It is often referred to as a northern outpost. It’s the birthplace of The Groundhopper and his best mate, the late, great Frank Palmer. My father Frank was born at No.67 Dixon Street on Aug 1st 1933. He later became a reporter on the Daily Express and Daily Mirror. He took early retirement to fulfil his dreams of being an author. He wrote eighteen detective thrillers. They would knock the spots off some of the crap on TV these days. (Apart from Heartbeat) He had a razor-sharp wit and I miss him so much. 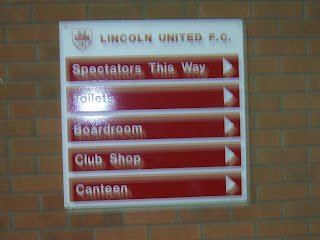 It’s time for a cup of char, so we nip into the canteen. We have a change of heart and both choose Bovril. I’d give it 7 out of 10.

Lincoln United were formed in 1938. I saw them smash Shepshed Dymano 3-0 at The Dovecote a few weeks back, when ‘Bruiser’ spent nearly half the game in the clubhouse. White Van Man’s friend, the assistant manager of Eastwood Town, John Ramshaw had a short spell as manager at The Whites last season. 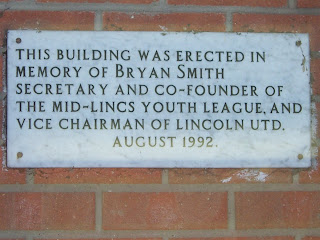 There’s a dreadful, dreary CD on the tannoy system, I haven’t a clue who it is. We are treated to the whole album. The girl singing just drones on and on, a bit like EastEnders’ Dot Cotton.

The teams are finally out on the pitch, it’s a welcome relief. Lincoln are putting together a nice little run and are almost untouchable on their travels. They are 10th in the table.

Glapwell is in north east Derbyshire and lies between the towns of Mansfield and Chesterfield. It has a population of just 1500 people. They are owned by local dentist and former Aldershot Town player Colin Hancock. 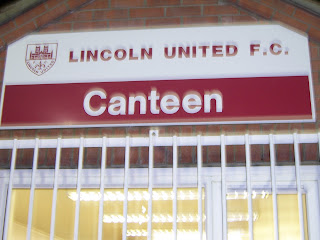 The visitors knock the ball around nicely in the opening stages. They look well drilled and so they should be as coaches Kev Gee and my old boss at Notts County, John Gaunt both have their Uefa badges.

The Whites get into their stride though and open the scoring on ten minutes. from a clever corner which is returned from the back stick for the in-form Sean Cann to net.

Midfield duo Brendan McDaid and Dave Frecklington (brother of Sticky’s favourite Lee) get hold of the midfield by the scruff of its neck. It’s Frecklington who gives them a deserved lead on 35 minutes, sending a free-kick sailing over the wall and past a hopelessly positioned Laurence Matthewson.

Glapwell coach John Gaunt comes strolling past us, he’s pleased to see me and we shake hands. He gives his view on the game and the inadequacies of Glapwell. I expect he will be blow-torching the dressing room walls at the break. I’ve had the hairdryer treatment off him a time or two, I can tell you.

We snuck into the Social Club for a swift pint. Bobby has a pint of maids’ water (Carling) and Sticky an extra cold Guinness. Milan are drawing 0-0 with Man Utd. White Van Man will be stretched out on the sofa with a packet of Hob Nobs drooling at these over-rated superstars.

Glapwell deteriorate in the second period and hold up the white flag. The superb away following prefer to vent their frustration on the excellent referee. Lincoln go three up with a replica of the first goal, Cann obliging again.

Their fourth, is the goal of the game. The unselfish Ben Good shrugs off the attentions of the Glapwell defence and plays in Cann down the right hand side. He still has plenty to do but finishes with aplomb, lifting the ball over the advancing Matthewson. 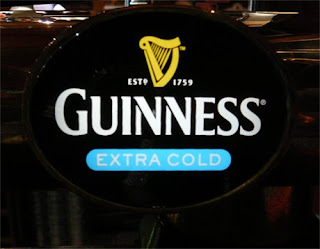 We are treated to a five star performance from the influential Frecklington when he blasts home a penalty following a foul on the substitute.

Lincoln have been different gravy and are on a roll right now. Glapwell miss their leading goalscorer, the influential Ian Brown, who is at college tonight.

The Glapwell following hurl abuse at the first-rate official at the end of the game, congregating as a mob close to the tunnel. They’d have been better to save their vitriol for their team, who have been an embarrassment tonight.


Man of the Match: David Frecklington

Good read, although let me pick you up on a couple of points I have noticed. Man Utd played Internazionale (Inter) and refering to them as Milan infers they were playing AC. The second point would be a new lens for the camera, I have better focus after drinking 10 pints of Stella!!

The young gent, hitting the tennis ball with a golf club, looks like a regular purchaser of garments from that fine establishment 'Tweedies'.

Reaper you are losing your touch i can recall when you could down 10 pints of Stella with JD chasers.

Hurrah for a Tweedies mention they are purveyors of fine threads for the cooler guy who needs to be neat for the street. I applaud Sticky's taste he looks a real dandy when he is Tweedied up.

magnificent points altogether, you just gained a
emblem new reader. What may you suggest in regards to your post
that you just made some days in the past? Any positive?
my webpage :: http://www.teenpornsexpussy.com/

Asking questions are actually pleasant thing if you are not understanding anything completely,
but this article presents good understanding even.
Here is my page ; contractors Orlando