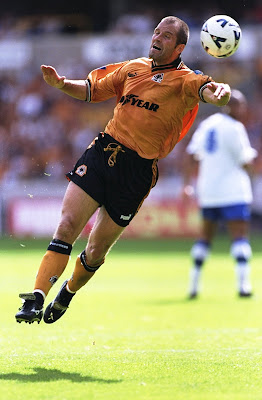 It’s been a wretched week for Sticky Palms, where nothing has gone my way. Misery at work, Notts blowing the County Championship and Lincoln being knocked out the Johnstone’s Paint Trophy, are just three of the things to go wrong for me.

It’s Friday night and I need cheering up. I have a couple of Stella’s as an aperitif. The Nuclear Scientist has invited me round for a game of table tennis. I’m not feeling sociable but accept his offer, despite being tired and tetchy. I’ve not slept well for the last couple of nights. We have a couple of bottles of real ale. ‘The Canadian’ turns up. He’s not much good at ping pong, I normally hammer him. Tonight he turns the tables on me. I arrive home miserable and moody, and head straight for bed. Surely the weekend will get better? 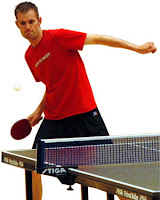 I’m up early again; this insomnia is driving me crazy. I’m down at Highfields, near Nottingham University, scouting for boys. It’s like a cattle market and not my sort of scene. Nearly every club in the East Midlands is represented. Even Notts County manager Ian McParland shows up. It’s been a sad week down ‘The Lane’ former manager Jimmy Sirrel has passed away at the age of 86. Jimmy Squirrel my mum used to call him.

I race back home as ‘The Skipper’ has a 12pm kick off. His team play with heart and soul. They go down 3 -2 to last year’s champions. It could have been a larger margin, but the back five are magnificent. 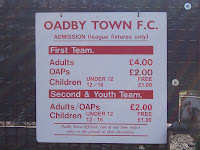 I pick up ‘The Nuclear Scientist’ at just after 2pm. White Van Man has cleared off to Butt Hole Lane to watch Shepshed Dynamo versus Alfreton Town in the FA Cup.

I’ve not seen much of The Nuclear Scientist in recent weeks as he’s been away on business in Israel and Liverpool. Apparently Liverpool was the scarier place of the two. Luckily, he didn’t bump into Joey Barton.

NS has brought his sat nav. I was hoping to go down the M1 but it’s sent us straight through Leicester city centre. We arrive at the ground just before 3pm. 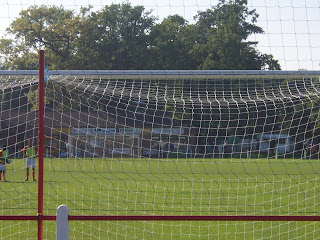 Oadby is south-east of Leicester and has a population of over 20,000. It’s close to Leicester Racecourse and the University of Leicester. Queen bassist John Deacon was born in the area, The legendary kids toy game Mastermind , where you have to guess the coloured sequence of hidden pegs on a similar board to cribbage, is made in Oadby as are Red Noses.

Oadby Owls, hold one of the best junior tournaments I’ve ever been to. Teams travel from all over the Midlands to participate in it.

Today’s visitors are Tipton, who reside in the Black Country. It has a population of 40,000. Wolves’ legend Steve Bull was born in the town. It is also well known for the Tipton Harriers Athletics Club.

We park behind the goal. NS pays us in at £4 a go. He also buys the programme which is an excellent effort. A guy I met at Welbeck Colliery last season called Rambler used to edit the programme. The guy who has taken over has maintained the quality.

Topps Park is very picturesque and surrounded by trees. The area around it is affluent. The pitch from a distance looks in fine fettle. Oadby Town were formed in 1937 and are nicknamed ‘The Poachers.’

We’re in the bar and the players have just kicked off. NS is only a little lad and has brought no ID with him so I have to get the round in. We’re served by a cheery guy behind the bar. I have a Stella; the little lad has a shandy. 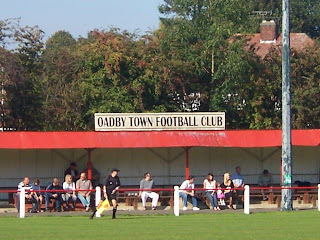 Gillette Soccer Saturday is on the TV in the corner of the room. Exeter notch the first goal of the afternoon at Macclesfield’s Moss Rose.

We stand level to the eighteen yard box that Oadby will attack. The visitors play in the brilliant orange that the Dutch national team often wear. They also play total football.

Tipton ‘keeper Wes Cox bellows out instructions to his defenders. He’s a tall boy with cauliflower ears. He wouldn’t look out of place in a boxing ring. 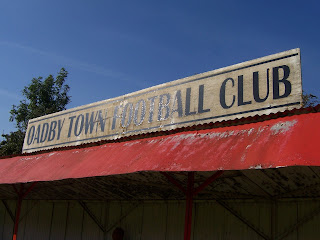 The Poachers lie in the nether regions of the Midland Alliance League. And on this evidence it’s not hard to see why. They are quite a young team, but hardly fashion a chance of worthy note.

The visitors have balance, beauty and pace. They have an edge and purpose to their game. They waste several chances before opening the scoring on 42 minutes through a Nicky Campbell penalty, given for hand ball.

We’re both a bit peckish at the break and have some chips from the food bar. Tea is served in the clubhouse but gets a thumbs down as it’s DIY. A bag is thrown into a polystyrene cup and you are left to do the rest yourself. It’s a five out of ten. 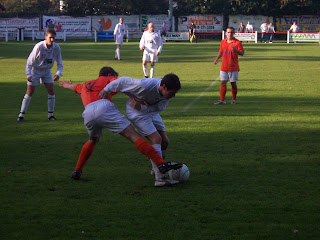 We scan SKY for the latest scores. The laughing stock of the Premiership, Newcastle United, are already two goals down at home to Blackburn Rovers.

I notice a framed West Ham United shirt on the wall, with Dr Martens blazoned across it. Apparently Oadby played them in a FA Youth Cup game six years ago.

We stand in the same position as we expect more of the same from the visitors. Oadby have an encouraging spell of pressure. Substitute Seal smashes one against the upright and ‘keeper Cox saves smartly from Andy Tiday. 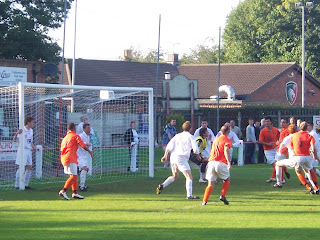 Tipton put the game to bed in the 75th minute with a magnificent dead ball strike from wing back Eric Bowen, who seems to be covering every blade of grass on the pitch.

Tipton forward Nathan Jones has lead the line magnificently. He runs the channels, and shields the ball cleverly away from his opponent. He makes way for a colleague fifteen minutes from time.

Substitute David Waple evades the offside trap two minutes from time and lashes the ball into the net. Karl Edwards rubs salt further into the wound in added time, expertly finding the bottom right hand corner of the goal with a left foot cross shot. 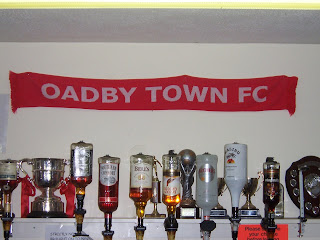 Tipton have been terrific value and I shall make the 60 mile journey to their ground later in the season.

We get in the car and turn on BBC 5 Live. Forest have failed to trouble the scorers at Plymouth’s Home Park, and currently lie bottom of the pile in the Championship.

The sat nav takes us up the Belgrave Road through the heavily populated Asian area of Leicester. It’s a fascinating cultural part of the city. My father once wrote a book based on this area. They are erecting all the lights in preparation for Diwali, which is a festival organised by Sikhs and Hindus, that takes place in October. I might return to enjoy the celebrations with the friendly Asian community.

Man of the Match: Eric Bowen
Posted by Sticky at 9:10 AM

the belgrave road is a dump.

bring on table tennis big lad . chips at half time you fat fooker .