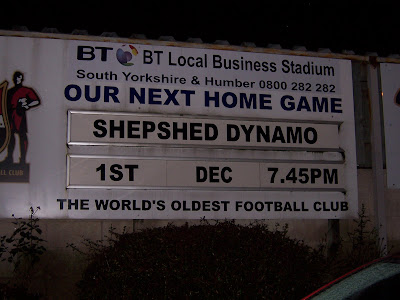 I can’t believe the cheek of it. The dishonour. The betrayal. When I think of how I have championed her for all those years on this blog, only to receive this crushing blow, below the belt.

I often lie in bed at night and dream of the happier times. The two for one offer on Volvic lemon and lime flavoured water in Blidworth, the meal deal offer at their branch in D***y or just keeping warm, whilst pretending to read the papers, in perishing temperatures, at their superstore in Glossop.

But the one I love has kicked sand in my face. Rather than let Sticky officially open their new Keyworth branch, the Co-operative Society, instead, allow a six year old schoolboy (he won it in a raffle), who has never bought more than a bag of Haribos, to cut the ribbon and open the doors to their new store. Shame on you the Co-op!

By the time he is sacked (it won’t be long), we’ll be involved in another relegation dog fight. Do the decent thing Lincoln City. Do what you should have done two months ago. Appoint John Pemberton as ‘our’ leader, before it’s too late.

I took a step back from groundhopping and watched my two boys over the weekend. Sticky junior popped some angry pills at half-time on Saturday and got involved in an altercation with Billy Bunter from Hucknall. 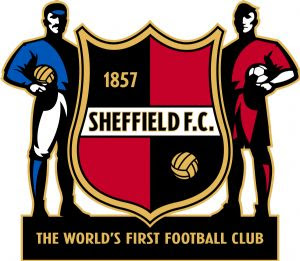 The threat of his first career yellow card was well on track until he was smartly subbed by his astute coach. I cringed with embarrassment as junior booted his water bottle a full thirty yards across the recreation playing fields. It was his first shot on target all game.

‘The Skipper’ goes from strength to strength for his new Sunday side – Clifton All-Whites. They’ve won three on the spin and continue to play champagne football. It’s a club that is proud of its roots. Players to have moved onto better things, that once wore the famous all white strip include: Viv Anderson, Andy Cole, Darren Huckerby, Jermaine Jenas and Michael Johnson.

It’s Sunday evening. Mrs P and I are enjoying a bottle of dry white wine. The kids are giggling at Harry Hill’s TV Burp. He’s taking the rise out of Channel 4 chef Hugh Fearnley-Whittingstall. My phone suddenly goes off. It’s the White Van Man. Screats is back at Shepshed Dynamo and they’re playing the World’s oldest club – Sheffield FC on Tuesday evening. Would I like to come? 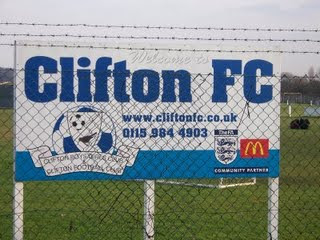 A penny for Mrs P’s thoughts anyone? I’m already booked in at the City of Manchester Stadium on Wednesday evening for City v ‘The Arsenal in the League Cup. Oh dear readers. Sticky P’s in trouble again.

I bumped into Screats last Tuesday evening. The Taxman and I had taken in the Carlton Town v Grantham Town game. Screats was suited and booted. I asked him if he was injured or suspended.. He replied that he wasn’t. It appeared that he’d fallen out of favour with the management. I was delighted to hear that he was on his way back to Shepshed (the clown shouldn’t have left in the first place).

Predictably, members of the Grantham management team were asked to leave the touchline last Tuesday evening, despite winning comfortably. One stood on a beer garden wooden table barking out instructions. Their erratic behaviour follows a similar pattern to when they were at the helm at Shepshed. They spent more time in the stand at The Dovecote than Alex Ferguson. 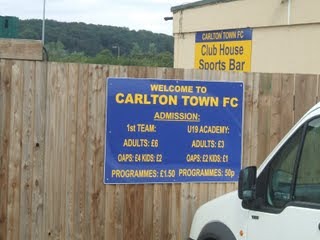 White Van Man picks me up in The Fairway car park at 6.25pm on the dot. We drive up to Screats’ Dad’s house and jump into his motor. We have an uninterrupted run up to Dronfield in the fading rush-hour traffic.

Dronfield is a market town on the Derbyshire/South Yorkshire border. It lies on the River Drone and has a population of just under 21,000. It is twinned with the German town of Sindelfingen, which is the home of the Mercedes Benz. 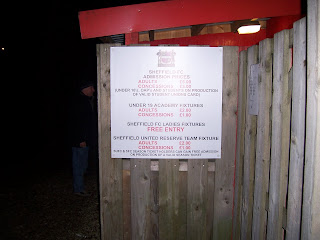 Def Leopard drummer Rick Allen was born in Dronfield. His left arm was amputated in 1984 following a motoring accident in Sheffield.

I have a wander around the outside of the ground and try out my camera without the flash. It’s £6 admission and £1.50 for a splendid programme. I

I’ve been trying to tick-off this ground for donkey’s now and had hoped to visit during daylight hours. Not to come tonight would have been a missed opportunity. Holby City? I’m a Celebrity? It’s a no brainer readers.

WVM and Screats’ Dad are enjoying a brew, although WVM complains that tea is £1 per cup. I’ll wait for the break. 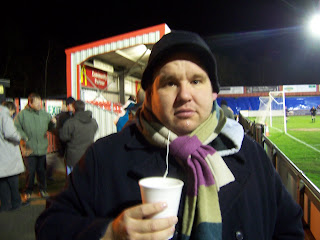 The DJ fills the sleet-laden skies with the dulcet tones of ‘No Limits’ from Dutch Eurodance outfit 2 Unlimited. He ups the ante further with ‘Everybody’s Free’ by Zambian dance singer Rozalla.

Sheffield FC were founded in 1857 and claim to be the World’s oldest football club. They celebrated their 150th anniversary in 2007 with a showpiece friendly against Inter Milan at Bramall Lane.

Their thirteen match unbeaten run came to an abrupt ending with a three nil reverse at Witton Albion last Saturday. 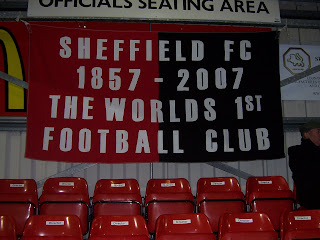 Sticky is captivated with the ground. It has the personal touch and has got the lot. I walk anti-clockwise past a covered terrace and towards an open end behind the goal. I spot my first photo opportunity of the evening. In the left hand corner is a fully working, old fashioned scoreboard. All the wooden numbers are lined up ready for the goal fest that lies ahead. It’s like the one from the 70s cult TV show It’s a Knockout.

I eventually join up with my companions who are stood to the right of the Shepshed dugout. Iain Screaton has already been booked by an over zealous Mr G Hock.

Jimmy Ginnelly is the Dynamo assistant manager. He chews gum and pours scorn over referee Hock. I saw him take defeat badly at Gedling MW a few years back in an FA Vase game. He only has eyes for the referee and rarely makes a coaching point. 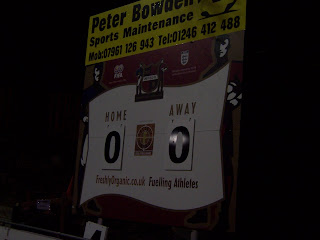 Shepshed begin brightly and create a few half chances. Sheffield FC soon get into the swing of things and take the lead on 15 minutes. A poor goal kick by the highly-rated Nick Jupp lands at the feet of the nifty former Chesterfield trainee Jamie Jackson. He plays in former Alfreton powerhouse Brian Cushworth who crashes a shot into the corner of the net.

Referee Hock doesn’t allow for the appalling weather conditions. There’s barely a bad tackle in the game and yet the man in black keeps waving yellow cards around to both teams for the slightest contact.

Shepshed are hanging on for the break. Jackson’s pace causes problems down the right but they fail to double their lead on several occasions. 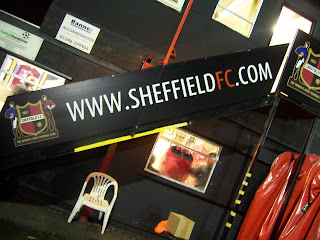 Screats’ Dad’s favourite player – Roland Agbor – has a bit of pace and tenacity about him. Unfortunately he hobbles off with ankle injury in the 42nd minute. His replacement, Joe Harris, wastes a golden opportunity shortly before the break.

It’s siling down with sleet. The brew is disappointing and expensive. I thought Yorkshire poured the perfect brew.The DJ knocks out New Order and Gorillaz. Sticky is enjoying the Sheffield FC experience.

Shepshed are bloody awful second half. It’s worse than some of the rammle I saw at The Dovecote last season. 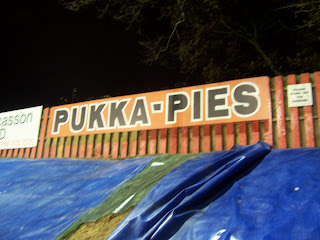 We’ve been joined in the stand by the injured Roland Agbor. Screats’ Dad suggests he treats his swollen ankle with a horse’s placenta.

Sheffield FC stack up the chances but can’t find the target. Suddenly Luke Barlone latches onto a through ball and is wiped out by Sheffield ‘keeper Leigh Walker. It’s a straight red for Walker.

A tich of a lad called Roney goes between the sticks. His first job of the night is to pick the ball up from out of the net from the resulting free-kick. 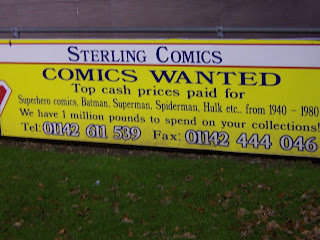 Shepshed fail to push on. Reece is often caught too far up the pitch. Sheffield make hay down the right hand side, with Jackson rampant. Eagers knocks in a far post cross to make it 2-1.

Moments later another cross from Jackson is turned into his own net by Screaton. The game is over minutes later with Cushworth bagging his second of the night, after powering his way through a leggy and tiresome Shepshed defence.

Man of the Match: Jamie Jackson

Screats what are you doing wasting your time at Shepshed ?
You could travel a far shorted distance and get hammered 4-1 playing for Keyworth !!

.. and if you're looking for another "old fashioned scoreboard" - check out Lancaster City :-)