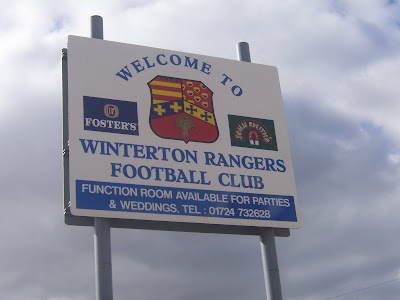 The ruddy-faced man grabs the remote control off the arm of his reclining chair and presses the ‘off’ button. He slurps the remaining dregs from his super-strength can of cider. He has taken the afternoon off work to watch the Budget. Gone are the days when he used to chuckle at Ken Clarke chalking a few pence off cider.

Labour Chancellor of the Exchequer, Alastair Darling, has well and truly cheesed him off. The man will have to tighten his purse strings. This cider-drinking supremo has single-handedly propped up the apple industry for the last 35 years. 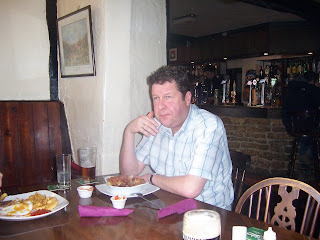 This man is called Trumpy Bolton. A tear rolls down his face, slopes off his chin and hits the floor. He crushes his empty can and hurls into the waste paper basket situated in the corner of the room. He picks up his phone and dials 118 118. He asks for the phone number of 11, Downing Street, Westminster, London.

Trumpy demands to be put through to Mr Darling to lodge a complaint about the cider tax rise. He’s told that Mr Darling isn’t taking calls right now. He leaves a garbled message for him to ring back. I’ll be having a pint of cider with him in Scunthorpe on Saturday (that’s with Trumpy not Darling): my shout, of course. 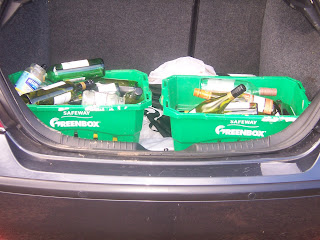 It’s Friday evening. Mrs P is snuggled up on the sofa watching the soaps. Sticky Palms is up to no good on the internet. A friend of mine is DJing on community-based radio station Erewash Sound.

It’s an alternative Eighties show. I tune in online. I drop him a couple of texts under a pseudonym asking for ‘Bella Lugosi’s Dead’ by Bauhaus and ‘Party Fears Two’ by the late, great Billy Mackenzie of The Associates. He plays them both.

It’s the day of the game and I’m in the kitchen coddling my eggs listening to Brian Matthew playing ‘Elouise’ by Barry Ryan from 1968 – it was later covered by The Damned in 1986.

I’m not particularly in good books readers. I have to carry out a series of chores before departing for sunny Scunny. 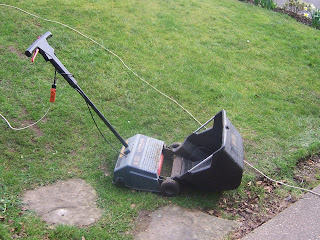 The forecast for early next week is for heavy rain. With this in mind Sticky dusts down the lawnraker and scarifies the front lawn. I’ll put some feed and weed down tomorrow before raking it out again.

I nip up the bottle bank and bump into ‘Woody.’ He’s a big Pies fan. Driving back home I think about all the race meetings and skiing trips we used to go on: happy days indeed.

I notice Finley (pet rabbit) dribbling his ball around his cage. His skills are sublime as he weaves in and out an obstacle course I set up for him. He’s on par with Colwyn Bay wing wizard Eddie Jebb. 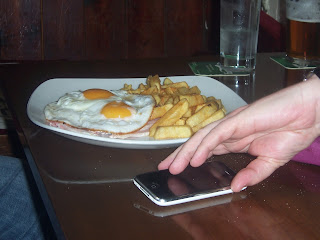 There’s a look of disgust and a tut tut from Mrs P as I slip three cans of Stella into a Sainsbury’s carrier bag.

‘Chopper Harris’ rolls up in his BMW at 11.35am. Mrs P is chit-chatting to a neighbour. ‘The Architect’ has parked his arse in the front. I squeeze into the middle seat where I’m wedged in by Trumpy Bolton and White Van Man: it’s the first full car of the season.

Trumpy is decked out in his River Island collection, whilst Sticky sports a bright blue number from H&M. We might be knocking on the door of death readers, but we’re dedicated followers of fashion. 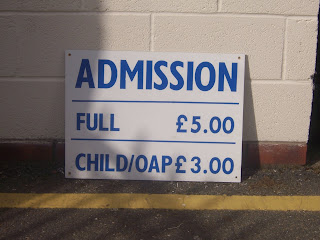 Trumpy’s looking a tad perky. Earlier this morning he popped round WVM’s house to check out the female lodger. He seems to of been suitably impressed.

‘Chopper’ has ‘Talk Shite’ on the radio. The Architect browses through the Times sports section. White Van Man sits quietly in the corner. Trumpy Bolton gets stuck into his one litre bottle of cider. 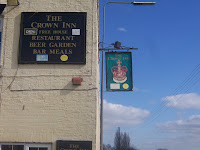 ‘Chopper’ pilots down the A46 towards Newark. The tailback of traffic from the carriageway upgrade is horrific. We by-pass Newark and Lincoln and head up the A15. Trumpy has earmarked a pub for us at the village of Glentham in the West Lindsay district of Lincolnshire (population 341). It’s just turned 1pm as we pull into the car park of the 400 year old Crown Inn.

Sticky has a pint of Black Sheep which is accompanied by a cheese and bacon baguette. The Eagles classic ‘Hotel California’ is on the pub jukebox. It topped the Billboard Hot 100 singles in 1977 and was released on the Asylum label (just warming up for a stint on Erewash Sound folks). 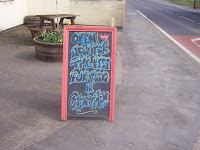 We have another beer. My head begins to spin. Everyone throws three darts at the board on exiting the pub. Sticky scores a ton.

The remaining 20 miles is uneventful, although Trumpy gets overexcited when spotting a tourist sign for the Brandy Wharf Cider Centre.

Winterton is a small town in north Lincolnshire, four miles outside Scunthorpe. It has a population of 5000 people. 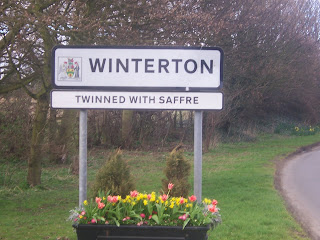 I pay ‘Chopper’ in for driving. Admission is £5 and £1 for another well-produced programme. On page 14 there is an article called ‘view from the terrace.’ It’s written by Lincoln based footballer traveller Chris Child.

Below his report is a welcome to West Street to ‘Sticky Palms and his daft mates.’ It’s a lovely touch from the programme editor. 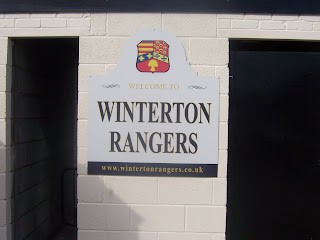 As I squeeze my way through the turnstile I can hear ‘Footloose’ by Kenny Loggins on the Rangers PA system - it’s not a good start.

The ground is impressive and the playing surface looks smashing. I snuck into the bar and find a pint of Tetley’s bitter waiting for me. Racing from Kempton is on the TV.

We stand behind the goal nearest the clubhouse as the two captains (who are both goalkeepers) shake hands. Arnold’s stopper is called Lee Broster – I work with ‘Bros’ at the Notts County youth set-up. 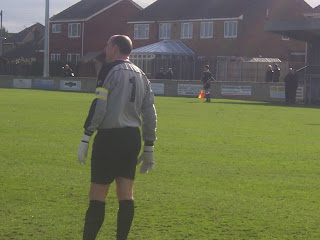 Another guy I used to work with is the Eagles manager Chris Freestone. He once made an appearance in an FA Cup semi-final for Middlesbrough.

Arnold kick towards the bar. Trumpy has joined us and is shedding a tear or two. I drape my arm around his shoulder and ask him if he is OK. He blubbers that a Winterton official has informed him that the bar is closed until half time.

The teams are evenly matched and both look to pass the ball wide. Rangers take the lead on 20 minutes. I notice through my drunken haze a shot come in from the right which is blocked, but the rebound is tucked away by Dean Wilburn. 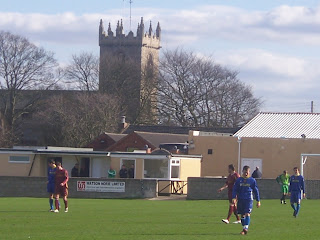 The Eagles are stung into a response. They restore parity within five minutes with former Doncaster Rovers striker Robert Gill firing home a Smithson cross.

‘Chopper’ has toured the world with the British Army and has experienced the coldest of climates, but on 35 minutes the big girls’ blouse has to fetch his Helly Hansen jacket from the car.

Winterton edge in front on the stroke of half time with a close range finish from Stuart Longbone. Trumpy has missed the goal and is enquiring with the club steward on when the bar shutters will be coming up. 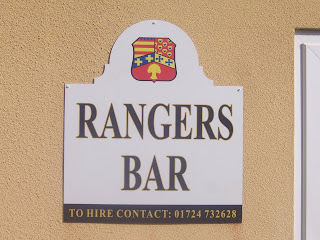 Sticky has a Bulmers at the break (+10%) that’s budget increase not ABV. Poor old Trumpy is glued to the half times on Sky Sports. His mood darkens with the news that Leicester goalkeeper Chris Weale has let a back pass roll over his foot and trickle into an empty net.

Ex Arnold striker Ben Hutchinson’s name rolls up on the Sky info bar. He’s notched a goal for Dundee, where he is currently on loan from Celtic.

Trumpy has shouted another beer up, but Chopper and I decide to catch up with the match. It’s already 3-1 to Rangers by the time we’ve took up our position behind the goal. 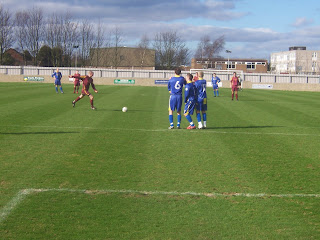 Arnold give up the ghost as Winterton press the game and keep the ball moving. With seven minutes remaining a ball is pulled back from the left for Gavin Cooper to calmly stroke the ball home.

The Eagles remove their best player (No.7) and introduce former Scunthorpe United striker Martin Carruthers. It means Arnold have a forward line with a combined age of 75 years. Level 5 is a young man’s game. Glossop got to the FA Vase final last season with an average age of 23. 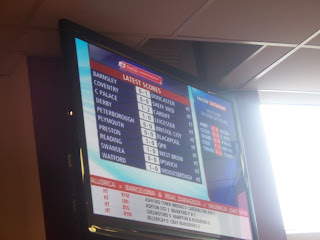 The drive home isn’t without incident. Trumpy treads on my £1 special Asda reading glasses. I patch them up but bear a remarkable resemblance to Coronation Street’s Jack Duckworth.

Man of the Match: Martin Pembleton

footloose....sorry about that. we've been pumping out some chart blasters recently and I thought we'd give the er...older supporters sommat to tap a toe at. Dr Feelgood went down very well by the way.

It seems the Chopper has good taste on radio station
When you popping up to Staveley?
Daisy x