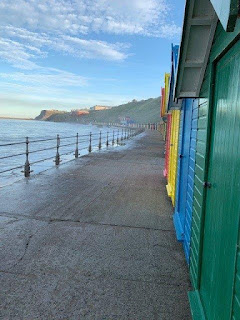 Two days on the Pop in West Yorkshire with Tony Mac have taken their toll on me. I'm dog-tired folks. I stay in Saturday evening, summing up enough energy to rustle up an award-winning chilli con carne. I notice, after supper, that Radford FC won again without my presence. I can't emphasise enough how much of a Jonah I am when I rock up at Selhurst Street. I decide it's time to patch things up (wind him up) with their legendary manager Big Glenn Russell who says I'm banned from the ground indefinitely. I drop him a text to say I've bought a season ticket at Basford United (it'll never happen folks). The daft lad falls for it hook, line and sinker. My phone console lights up. We exchange a few insults and I'm told I'm still barred whilst results continue to improve.

I'm slumped in my armchair for most of the day, researching and blogging. There's no sloping off to town for a few real ales in Lillie Langtry's. Ms Moon is as happy as Larry watching her box set of Place in the Sun. I retire to bed, early doors, as us bus lads are up for work at 6 a.m. 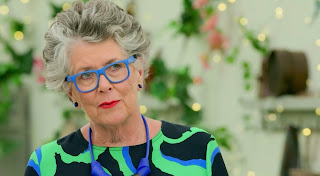 I spot that F.C.United of Manchester are in town (Basford) on Tuesday evening. It's a moral dilemma: I don't do 4G and ain't that fond of Basford. I'd quite enjoy it in the away end as F.C.United have some cracking ditties. A few years ago Ms Moon and I enjoyed a rain-soaked away day with them in the West Midlands at Sporting Khalsa, in an FA Cup tie. The game ebbed and flowed with the visitors running out 3-2 winners.

I make the rookie mistake of stopping in as rain sweeps in from the west. Basford is so bloody awkward to get to when you're not able to drive. Jesus wept, The Great British Bake Off is on the gogglebox. I mention to Ms Moon that Mary Berry looks a bit like Dame Edna Everidge. She replies that Mary didn't come across on a Bosman free transfer from BBC 2 to Channel 4 and that the baking judge is in fact Prue Leith (me neither). 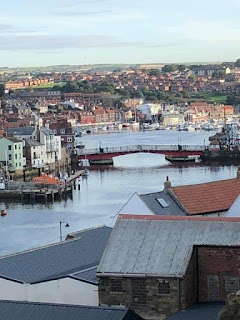 I decide to have a soak in the bath. I tune into Radio Nottingham as the Pies are away at The Shay in the wonderful old mill town of Halifax, where I mopped up on the craft ale bar front a few weeks back. Notts County are, as their old commentator Colin Slater would say, "two to the good" and in cruise control. Halifax are down to ten men. What follows is an extraordinary 20 minute passage of play, brilliantly captured in the moment by BBC's Charlie Slater. The Shaymen claw two goals back. Ten minutes of added time are played. In the game's last breath Matt Warburton sends The Shay fans into delirium with a 100th minute winner. 440 Notts fans make the miserable journey home empty handed.

It's Friday morning and I'm about to clock off at lunch for the weekend. The ringtone on my phone goes off. My heart skips ten to the dozen, it's the Eye Clinic from the QMC in Nottingham. It's a call I've waited patiently for. I'm given seven days' notice of a lens replacement following a detached retina. I clench my fist and punch the air as I run down the stairs with tears of joy falling down my cheek. What a way to start a long weekend away in North Yorkshire. 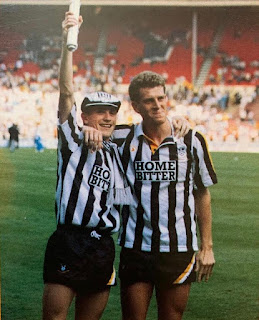 We're in the Ferrari - sorry my eyes are playing tricks on me - it's a Fiat 500. The traffic is nose to tail on the A1 close to Doncaster Racecourse. The pain is worsened with Steve Wright in the Afternoon on the car radio. We stop for some food in the picturesque, vibrant market town of Pickering. Neil Warnock, when managing Scarborough, signed Craig Short and his brother, Christian from Pickering Town in 1987. The former went onto to play for Notts County, D**y County, Everton and Blackburn Rovers, fetching millions in the transfer market and clocking up over 500 first team appearances.

We arrive at Whitby at 4 p.m.  We're spending tonight in Trumpy Bolton's dream accommodation - a Wetherspoons hotel called The Angel located on the quayside. The room, a steal at £85 for the night, gets the Ms Moon seal of approval following her 1000th episode of Four in a Bed. 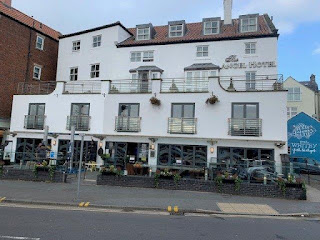 The skies are blue and the weather is warm as we wander up to the West Cliff. The tide is high as waves crash against the beach wall. A couple of disappointed surfers head up to Sandsend with their boards tucked under the armpits, unaware that the sea was up to the wall. The night will be drawing in by the time they pitch up there.

Ms Moon relaxes in the hotel whilst Sticky Palms ventures out into town. I tick off the Waiting Room on the railway station platform. I get chatting to a couple of beer enthusiasts from Clitheroe and Blyth who tip me the wink on a few new pubs in the town that have opened since our last visit in 2016. 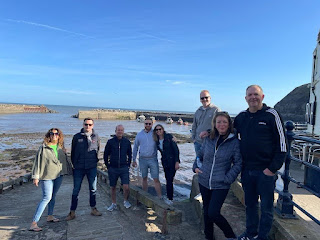 I cross over the bridge to visit a tiny taproom, but there's no room at the inn. I swing by The Endeavour before meeting up with Ms Moon in 'Spoons. The real ales aren't great. I have to settle for Shipyard. We finish the evening off at The Station which is bustling with friendly locals and cheery bar staff.

After a good night's sleep we head over bridge for breakfast at Sanders Yard, which is highly rated on Google reviews. Lord knows why; it's bloomin' awful. The staff are surly and the food is cold. The card machine is broken (that old chestnut). We settle up the bill, but there's no 10% tip for service after that omnishambles. 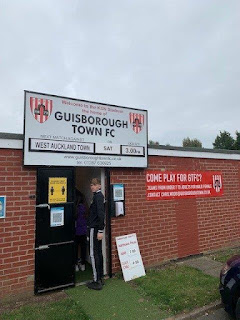 'Breakfast' is walked off up towards Sandsend - the surfers haven't washed up just yet. The rest of the gang from Nottingham rock up at midday. They meet and greet us at Resolution over lunch. We catch up over a pint or two before they stretch their legs on a culture tour of the town (pub crawl). I've already eyed-up a football match in the Northern League.

Guisborough is a market town in the Borough of Redcar and Cleveland in North Yorkshire. It has a population of 17,000. Notable people from the town include: the brilliant Early Doors actor Mark Benton, Grand National winning jockey Bob Champion and footballers Sean Gregan and James Coppinger. 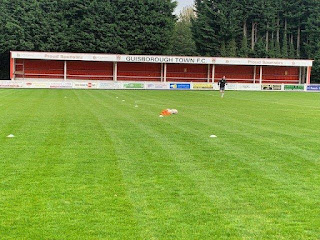 The trip is uneventful on the A171 up to Guisborough. There is, however, a moment that will live in the memory when Ms Moon belts out Dancing Queen by Abba which is played on Paul Gambaccini's Pick of the Pops from 1976. I'm comforted by an Auto Windscreens van parked up in a layby as Ms Moon makes a brave attempt at the high notes. The windscreen on further inspection comes through unscathed.

We stick the car on the road outside the tennis club opposite King George V Playing Fields. It's £7 on the turnstile and £1 each for a Golden Goal ticket. There are no programmes available. The ground is well shielded by huge leylandi trees. 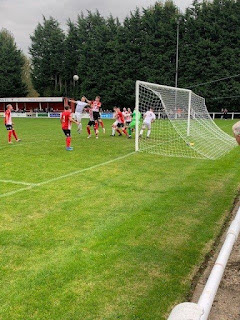 Both of us are 'Hank Marvin' following that feeble attempt at a breakfast. Ms Moon pokes her head through the serving hatch and shouts up a couple of steak mince pies. I enjoy some banter with the home 'keeper who is pulling off some acrobatic saves in the warm-up - "save 'em for the game youth."

We chance upon a suited and booted FA official. I ask him if he's the referee's assessor? They prefer to be called 'Match Observers' these days. I'll be sending one down to Radford's ground sometime soon unless Big Glenn lifts that 'temporary ban.' 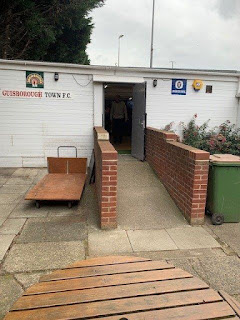 Today's visitors are West Auckland, winners of the Sir Thomas Lipton Trophy in 1909 and 1911 - you may remember the TV adaption called The Captain's Tale starring Dennis Waterman.

The first half is decent enough, but somewhat spoilt by the man in black who fails to send off the visiting No.7 following a tackle straight from a Jackie Chan Martial arts book.. He then proceeds to book all and sundry for the slightest infringement of the Laws of the Game, including a soft yellow card for the Guisborough 7 jacket. The visitors take the lead against the run of play with a well-executed goal. 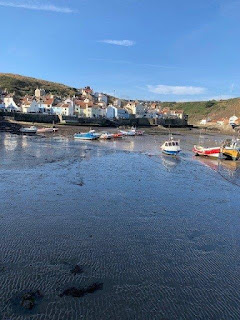 The second half is below par. Guisborough are reduced to ten men with a second yellow dished out to No.7 by the overzealous referee. The visitors see the game out without breaking sweat. We race back to Whitby. We're all staying in the Royal Hotel on the seafront. It's Fawlty Towers at it's finest. I slip away for a quiet pint in town at the splendid Arch and Abbey whilst Reception field a flood of complaints from angry customers.

We meet in the hotel bar and share a list of horror stories from the bedroom to the bathroom. There's no Guinness or real ale on either. Some of our party are worse for wear following the afternoon's shenanigans. We're booked in at The Blitz for evening food and end the night at a lively Abbey Wharf where one or two folks throw shapes to floor-fillers from Depeche Mode, Erasure and Queen. 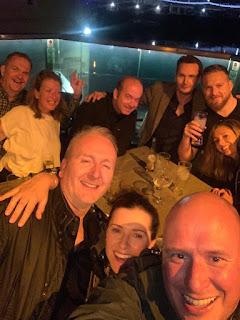 Tim, a lad from our party, is from Kent; a county I've yet to fully explore apart from seeing Notts County thumped 4-0 at Gillingham's Priestfield Stadium back in the mid 80s. I spend the evening tapping into him for tips on places to visit and the best pubs on offer. He comes up trumps with Faversham and Whistable which are firmly placed in the notebook (i-Phone notes) 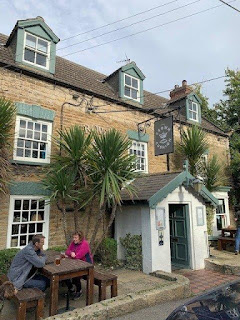 There are some sore heads and sleepless nights to report in the morning. I was as good as gold though, sticking to low abv real ale for most of the evening - makes a change eh? The group head up to the fishing village of Staithes. We stroll down to the harbour in uninterrupted sunshine and take a few snaps before jumping in the car and finishing off the weekend in the Crown and Cushion in the village of Welburn, where celebrity chef James Martin grew up. A Sunday Roast, accompanied by a couple of pints of Black Sheep, is the perfect end to a top weekend. Piers and Sticky can't 'arf pick 'em.

Man of the Match: The DJ at the Abbey Wharf