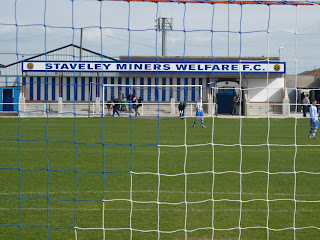 It’s a gorgeous, beautiful sun drenched Sunday morning. I’m stood at Ravenshead Leisure Centre in picturesque north Nottinghamshire. My mood is good. Yesterday, in the Nottinghamshire Young Elizabethan League Division One, our village U13 team, full of local lads, beat our relegation rivals, convincingly, away from home. The clean sheet has me beaming from ear to ear.

Today ‘The Skipper’ is playing for Clifton All Whites. Former Nottingham Forest and England international Des Walker is amongst our crowd on the touchline, watching his lad play.

I like the manager at Clifton. He is in it for all the right reasons. The boys respect him. His team have had a wretched run and are winless in their last seven outings. ‘The Skipper’ comes off the bench with 25 minutes to go. 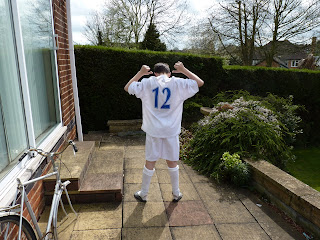 He’s somewhat of a lucky charm. He’s already bagged six goals this season from full back and right midfield. He takes his position in the penalty box as Clifton are awarded a corner. We are one nil down and chasing the game.

The corner is whipped in from the right, a white shirted, unmarked player, rises like a salmon between two defenders and plants a firm header into the roof of the net. I’m asking whose scored. Is it Blair or Nick? And then I see that familiar cheesy grin. It’s goal number seven for my lad.

‘The Taxman’ and I drive out to Arnold Town’s Eagle Valley ground on Tuesday evening. There is a heavy and prolonged spell of rain which lasts over half an hour. On arrival I say a quick hello to Eagles’ manager Chris Freestone, who once appeared in an FA Cup semi-final at Old Trafford for Middlesbrough.

Next thing I know is some big fat hairy-arsed South Yorkshire centre half has sent a clearance sailing over my head and into a farmer’s field. I decide to fetch the ball. I stumble into a five foot deep ditch. I’m soaked to the skin and covered in mud. 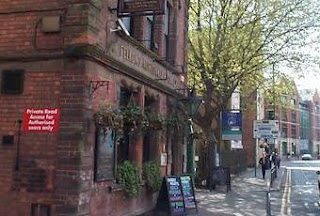 In the distance is the sound of gunshot fire. Am I the intended target? Bloody hell, I was only retrieving a football. I return to my spot, damp and soiled. How the hell am I going to explain to Mrs P about the state of my clothes and footwear?

It’s Friday evening. I’m in Nottingham, at a real ale house called Fellows Morton’s & Claytons. My old boss is retiring. He is legendary within our Company. ‘Shifty Edwards’ has cried off last minute with a feeble excuse. The turnout is excellent though, better than the warm ale that’s served up.

I finish off the evening by having two pints of the Portuguese lager, Sagres, in the Canal House. Before slipping away and catching the 11.30pm bus home. I’ve a busy un scheduled for tomorrow. 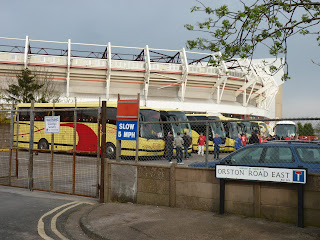 Sticky jnr and his mate ‘Chicken George have to be at The City Ground for 9am. They’re off to ‘Dirty Dirty Leeds.’ I ask Mrs P if she fancies a stroll around West Bridgford. The good lady has never turned down a shopping trip in her life.

We nip into Central News on The Avenue. It’s a paper shop that’s owned by Brian Clough’s son. You’d often find old Cloughie sat on a stool behind the counter, charming all the customers.

The skies suddenly darken and there is a heavy downpour of rain. I only came for the Farmers’ Market, but it appears we are a week too late. I bump into ‘Fletch’ in Marks and Spencer’s. We have a quick catch-up; I’ve not seen him in years. 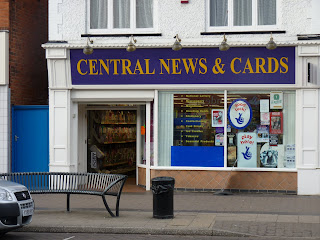 I’ve got to be at Calverton for 11am; it’s Finals Day. I go plain clothed. I’ve one specific target and don’t want people knowing I’m here. Forest scouts strut around in their Tricky Tree tracksuits, with initials on their tops. I make sure they don’t spot me and keep my distance. I watch a cracking game of football. It’s cost me £2, I could have flashed my scouting pass but I like to contribute towards the upkeep of the Notts FA.

I drive back home. It’s all kicking off at the cricket in Mumbai. They’ve had to toss the coin twice as the match referee Jeff Crowe didn’t hear the captain call because of all the hullabaloo. Boycott and Vaughan are having a field day about it on Five Live.

I have some mushroom soup with bread and cheese. I catch the first half of Leeds v Forest. Mum is whittling. Junior had phoned in earlier to tell her he was walking around Leeds city centre with his pal. Bloody hell, I thought official supporters’ coaches ferried fans straight to the ground. Oh well, he should be OK, he’s not badged up or anything. “What’s he wearing love?” asks Sticky. “His Nottingham NG1 fleece.” She replies. Oooh heck, I hope he’s got his trainers on. 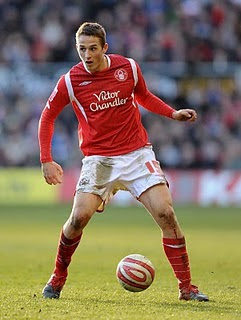 Forest control the game until Chris Cohen commits hari-kari with a desperate, unnecessary lunge on the half-way line. It looks a shocker on real time TV. Slow-motions are more forgiving. It’s a match defining moment. Cohen is shown a red card.

Billy Krankie gestures to the away following to increase the volume. Sticky jnr does his bit by text. I will have to check the Urban Dictionary for his lyrics on referee Mark Halsey. They are often heard on programmes such as Shameless and The Only Way Is Essex.

Is that a car horn I can hear? The ‘Blue Rocket’ is purring outside my drive. The White Van Man is furious about the Cohen sending off. A leggy, long-haired blonde, strolling down the street, soon has a calming and soothing effect on the Big Man. 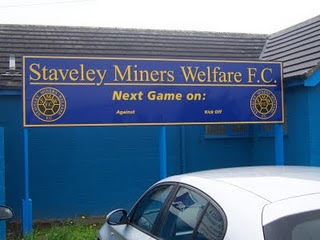 Forest leak four goals whilst we are on the M1 and so do West Ham. We pull into the Inkersall Road car park 15 minutes before kick off. We came here 18 months ago and were treated like royalty by Staveley Chairman, Terry Damms.

I first viewed Staveley MW a few seasons ago at Borrowash Victoria. Lee Gregory led the line that day. He’s banging goals in right, left and centre for The Shaymen of FC Halifax. I’m convinced that he’ll one day play in the Football League.

It’s £4 on the gate and £1 for an excellent programme. Terry is delighted to see us and lines up the drinks. Top Tweeter, Daisy Bruce, is in the bar too, I introduce myself to her.

Staveley are runaway leaders of the NCEL Division One. They require just a point from today’s game to clinch the Championship. 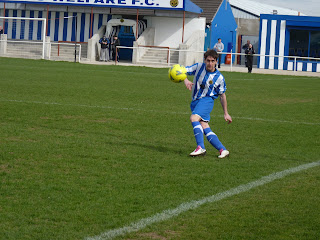 The new Clubhouse is first class. The attention to detail is incredible. There are four flat screen TVs on the wall, trophies sit on the bar and the walls are filled with memorabilia. I notice a signed photo of World Cup final referee – Rotherham born Howard Webb.

Daisy’s Mum asks if I want to pick a Golden Goal time. I fancy an early goal and plump for three minutes.

Staveley MW are awarded a penalty after three minutes, sadly for Sticky it takes an age to take; I just miss out on the jackpot. Ryan Damms (Terry’s lad) sends the Louth ‘keeper the wrong way. 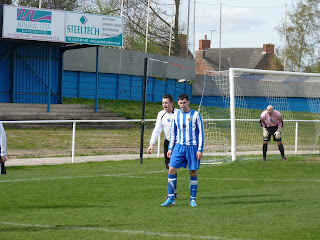 Louth weather the storm and gain confidence. Daniel Pawson converts a flick on from a corner to restore parity. The game is nearly as entertaining as Sticky junior’s texts. I can’t be held responsible for any Facebook status or insulting Tweets he’ll be sending on his Blackberry from the NFFC supporters’ coach. 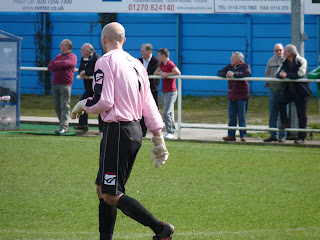 I upgrade to a Stella at the break, WVM stays loyal to his Diet Coke. The Big Man has his eyes on a bowl of Roses chocolates that sit on the bar. They are meant to be for the kids. His shovel size hands scoop up four or five sweets. Terry will have to nip out to the Staveley Co-op to buy another tin.

Terry’s got a bad feeling about the game and appears nervous. Daisy is biting her nails and looking stressed. Me, I’m just enjoying the people watching.

The champions elect, assisted by the wind begin to pepper their opponents goal. We’re stood on the balcony outside the Clubhouse. WVM brilliantly catches a stray Staveley shot. He hurls it back to the Right Said Fred lookalike goalkeeper. 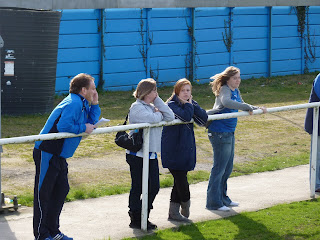 Staveley strike the woodwork for a third time. Twenty minutes from time Terry’s lad (Ryan) scores his 100th goal for the Club, nodding home at the far post.

The White Wolves don’t know when they are beaten. The Staveley ‘keeper is cleaning windows as a corner comes sailing in, Martin pounces on a loose ball to smash home the equaliser.

The game is in its dying embers when another excellent Louth corner sees a Carl Martin header crash off the underside of the bar. For once the woodwork helps and doesn’t hinder. 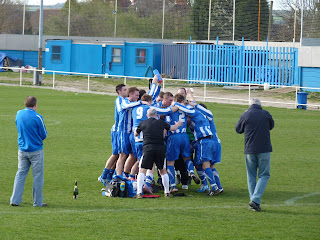 Terry dashes onto the pitch with bottles of Champagne. The League Chairman presents the Staveley skipper with the trophy. We quietly slip away before Terry notices that White Van Man has mopped up all the Roses chocolates.

Man of the Match: Sticky junior.
Posted by Sticky at 7:56 AM

Great blog Sticky, lovely to see you :)
Glad you didn't get a photo of my victory dance after one of the goals.. See you again x