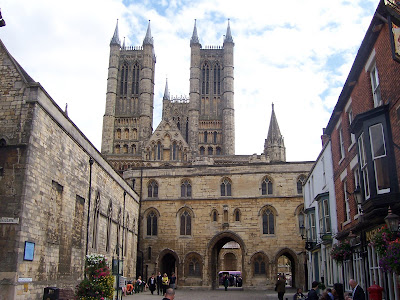 We’re driving up to the M62 on our way back from North Ferriby. We’re both still drooling over that woman special constable we saw at the ground. I’ve got the cricket on Five Live; England are caning Aussie. We pull into a garage for fuel. We rub our eyes in disbelief. There’s another woman police officer, buying a sandwich; she is drop-dead gorgeous. Memo to one’s self: send off for two application forms to join the Humberside Constabulary.

It’s Sunday and I’m nursing a hangover. We had The Nuclear Scientist and his wife around for a BBQ last night. I’ve had to hire a skip to dispose of the empties. 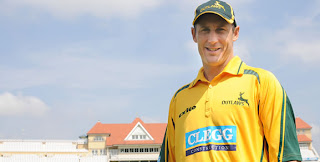 Notts are playing Somerset in the Pro 40 at Trent Bridge. It’s potentially Aussie overseas star David Hussey’s last game at ‘The Bridge.’ The weather forecast is poor. Sticky junior doesn’t fancy it but I manage to twist ‘The Skipper’s’ arm.

Hussey strides to the wicket with Notts once again in a spot of bother. He hits a single off his first ball and proceeds to play the next nine deliveries back. He bludgeons Somerset’s mediocre attack for a further 99 runs off 40 balls. It’s a ‘drop my bacon sandwich’ moment. The meagre crowd rises as one to applaud him off. He ends his innings on 120 not out. Legend! 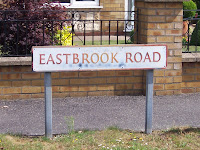 The boys were away for most of last week on a school trip. Mrs P texts me at work to see if I fancy taking her out for the day. ‘How about a trip to Lincoln she enquires?’ A perfect chance for a reckie before the Arsenal game thought a mischievous Groundhopper.

First port of call was my old house on Eastbrook Road. I lived here for the first five years of my life (1964-1969). I take a photo much to the displeasure of the next door neighbours. 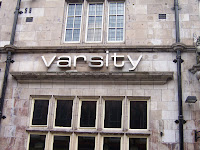 We park the car on Robey Street and take a hike into town, up the High Street. It’s tired, scruffy and full of take-away food establishments. There are signs though, of an Eastern European influence. There is a smattering of Polish and Baltic food outlets.

The city centre itself is delightful. There’s been development around Brayford Pool since I last came. The University of Lincoln has breathed new life in to the city. They are sponsoring Lincoln City’s away shirt this season. 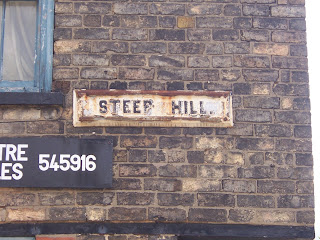 We walk up towards the cathedral and stop for a drink at bar called Varsity. Mrs P has a cappuccino; Sticky Palms has half a Stella. I feel good. The Stone Roses’ ‘I Am The Resurrection’ plays on the jukebox, Sky Sports is on the big screen and I’m near the love of my life – Lincoln City Football Club (ouch!)

We’ve had the Arsenal game pencilled in for a while. ‘The Guvnor’ (a senior manager at work) is a Gooner. He’d spotted that Lincoln were to play Arsenal in a celebration of their 125th anniversary. Arsene Wenger said all along it would a mixture of reserves and youth team players that he would send. The first team are due in Austria tomorrow, for a pre-season tour. 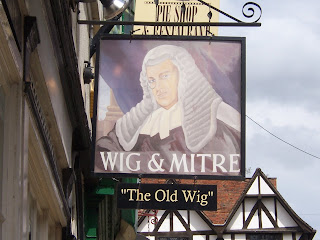 I’m expecting an increase of readership from the south of the country, so will put in a bit of Cockney rhyming slang to make them feel at home.

‘The Guvnor’ arrives at our manor twenty minutes late. Groundhopper is pacing up and down his drive waiting. Sticky junior once again misses the team bus. I’m secretly relieved. There’s nothing worse than your own son taking the piss out of you in front of your boss. ‘The Skipper’ travels with The Nuclear Scientist and Snooksy. 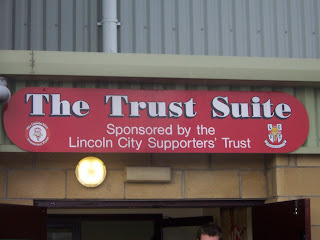 It’s eighteen months since I’ve been to Sincil Bank. Something died inside me about Lincoln when I lost my father nine years ago. My trips are sad and lonely. It’s a reason why I turned to groundhopping and scouting; to ease the pain. The Imps are the first result I look for. My heart always skips a beat before finding out their score. It can make or break my Saturday night. I’ve no-one to share this passion with anymore.

We drive through Cotgrave, down the A46 and skirt round Newark. The dual carriageway between Newark and Lincoln is fast and open.

‘The Guvnor’ is giving Sticky the lowdown on ‘The Arsenal.’ He’s a placid Cockney, not ‘apple pasty’ like Dennis Wise or George our next door neighbour. 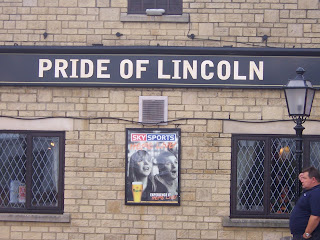 The Emirates Stadium is in Holloway, in the London Borough of Islington. It has a population of 12,000. It is the home of HMP Holloway, a women’s prison. The last woman executed in the United Kingdom, Ruth Ellis and keen racegoer Christabel Pankhurst, both had short spells there.

It’s an hour or so before kick-off and we’re holed up in The Pride of Lincoln. The place is buzzing. The wait for food is thirty minutes. We settle for a swift drink. ‘The Guvnor’ has an ‘Alistair Darling’ (a pint of Carling) and Sticky Palms a Coke. 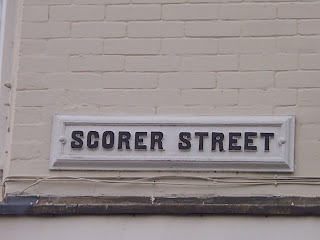 We’re soon parked up, close to where my Nana lived. I’m back up the High Street for the second time in a week. ‘The Guvnor’s’ 6’ 5” frame is as hungry as a horse. He wants some ‘jockey’s whips’ (chips). The King Neptune Fish Bar obliges.

We amble up the road past Scorer Street. Bit of trivia for you here: former Gunners’ striker Lee Chapman was born in this street. A striker born on Scorer Street.

We soon slip our way into the Echo Stand. Tickets are £15 for adults and £5 for kids. It’s worth every penny. The programme is £2.50 and is superbly produced by editor John Vickers. 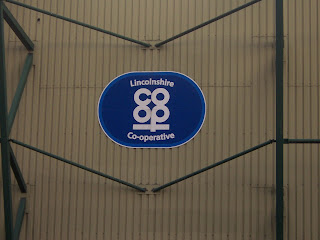 We join ‘The Nuclear Scientist, ‘The Skipper’ and Snooksy in the stand. The pre-match entertainment is cringe worthy. Some guy (who is he?) is trying to whip the crowd up into frenzy. But he can’t hold note and wouldn’t get a booking at the nearby Golden Cross. They’d have been far better hiring Chas and Dave on the old ‘Joanna.' That would have fired up the away support.

Lincoln are unrecognisable from the last time I saw them. N’Guessan has left for Leicester, Beevers to Colchester and the wonderfully gifted Lee Frecklington to Peterborough. I tipped Forest the wink on this boy. He will come back and haunt them for The Posh this season. 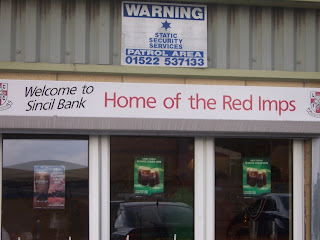 Imps’ manager Peter Jackson is putting his faith in youth. Not too many washed up journeyman have landed at Sincil Bank this summer. Their investment in the Centre of Excellence is hoping to pay dividends.

The playing surface is pristine but its narrow nature may not suit the visitors. The gulf in class is as wide as the Dartford Tunnel. Arsenal 8 jacket Jay Emmanuel-Thomas is a colossus in centre of the park. He shrugs off the labouring Butcher and Clarke with ease. His prize possession is his left peg. It doesn’t fire a stray bullet all evening. He was made captain of the u18s at the age of 16.

If Lincoln play any deeper they’ll end up sitting in the Stacey West Stand behind the goal. 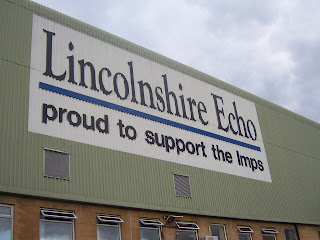 Thankfully the Gunners have left their shooting boots in north London. Dutchman, Nacer Barazite, Jay Simpson and Sanchez Watt miss gilt-edged chances. They finally take the lead shortly before the break. Frenchman Sunu makes a strong, bursting run down the middle and finishes with a nonchalant chip over Lincoln ‘keeper Burch. I manage to catch the goal at pitch-side level en-route to taking a bladder-bursting ‘Skipper’ to the toilet.

The entertainment ups a notch at half-time with three young girls showing more movement than the Lincoln midfield to the dulsate tones of the Black Eyed Peas. 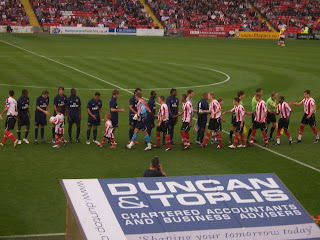 Liam Brady’s boys continue where they left off, although Imps’ new recruit, the former Blackburn Rovers winger Jamie Clarke is posing a few problems down the Lincoln right. He frequently shows the Arsenal full back a clean of heels, but his crossing and decision-making are poor.

Both the impressive Danny Hone and Richard Butcher have chances to restore parity.

Emmanuel-Thomas makes it 2-0 in the 71st minute, squeezing the ball home from a tight angle. 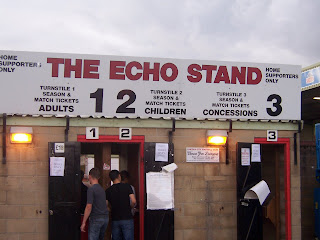 Lincoln continue to battle away. Aaron Brown reduces arrears with a free-kick that takes everyone by surprise. The mostly anonymous Chris Fagan, a recent signing from the Glenn Hoddle Soccer Academy, hits a peach of a shot to make it 2-2. The Imps go for the winner with all guns blazing.

But would you ‘Adam and Eve it’ it’s ‘The Arsenal’ who snatch a winner at the death. Luke Ayling’s far post header somehow squirming through the otherwise excellent Lincoln keeper’s hands. The goal is greeted like a FA Cup final winner by the 779 away contingent sat in the Co-op Stand.

Man of the Match: Rob Burch, Lincoln ‘keeper.
Posted by Sticky at 11:19 PM

Hey mate finally started me tour off ... got a couple of good games in the pipeline .... hope we can meet up at a game this season and go through a few groundhopping stories. I would recommened a visit to Rossington Main football might not be very good but you are guarnteed a laugh :P

How was lincoln arsenal ??

Goalhunter believe me, you don't want to meet up with the Groundhopper he is deadly boring and dresses like Brian Murphy in George and Mildred thanks to his local clothes store.