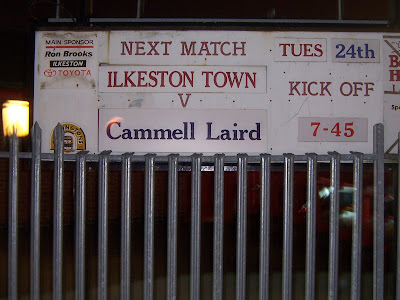 The final part of Channel 4’s Red Riding Hood didn’t half cheer me up. David Morrissey put in a stunning performance. His pricked conscience swayed him from bad cop to good cop. Thursday night’s won’t be the same without him.

I made my debut for ‘The Pies’ on the scouting front at the weekend. I was out the traps early doors Saturday and watched a couple of top junior teams in the morning. ‘The Skipper’ had a cup semi-final in the afternoon. One or two of his team were way off the pace. They were soundly beaten by Toton FC, 3-1.

I nipped down Platt Lane, Keyworth, to watch the final hour of Keyworth United against Clifton FC in the Nottinghamshire Senior League. It was a scrappy encounter, played on an awful surface. The home team ran out 1-0 victors.

I’ve decided to target Leicestershire on my scout radar. I was up with the larks and in Leicester city centre by 9.30am on Sunday. I saw a big strong Somalian boy score four times. It was enough to convince me to get him down the training ground, despite him being a very raw talent. Former Nottingham Forest, Lincoln City and Notts County striker, Jason Lee will be his coach; he’ll put him right. 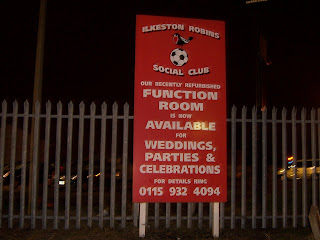 The Taxman has a long term sick note, but happily White Van Man and The Nuclear Scientist are aboard tonight’s team bus.

I fly home from a busy day at work. I’ve been temporarily deployed, for the last few days, in our production department. They sometimes have Heart FM on the radio in there. It’s been like the old Chinese water torture. All they play is Shania Twain, James Morrison, Spiller and Take That.

There’s time for a bowl of pasta that Mrs P very kindly rustles up. ‘The Skipper’ whitewashes me at cribbage 3-0. He’s improving with every game and is getting a little cock sure.

‘Athers’ texts me, he’s keen to join ‘The Hop’ tonight. We arrange to meet in the Apple Tree pub car park, on the ‘soulless’ Compton Acres estate, at 7pm. 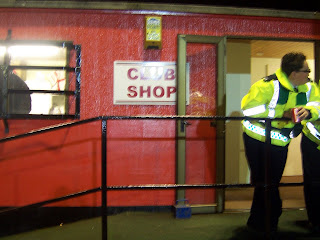 White Van Man cuts somebody in half at Wheatcrofts Roundabout. The innocent party blasts their horn, and shakes their fist. He performs the same trick to a poor old learner driver at Raleigh Island. He’s clearly looking forward to the start of the Grand Prix season in Australia on Sunday.

There are more roundabouts in Ilkeston than in Milton Keynes. We often balls up the final one, near the ground, but manage to take the correct third exit on this occasion.

It’s £1 to park the car. They all shoot off inside the ground whilst I take a few snaps. It’s £7 admission and £1 for a programme that is from the original game, postponed back in January.

Ilkeston lies in the borough of Erewash in Derbyshire. It has a population of just under 40,000 people. Notable folk from the area include: the actor and D***y County fan Robert Lindsey and Coronation Street’s number one womaniser, the ageing, boring Ken Barlow (William Roache} People may have noticed Ken getting his hands dirty down the canal side just lately, snogging Barnet born Stephanie Beacham, rather than sitting in the living room with Blanche and old turkey neck. 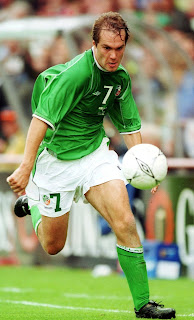 Cammell Laird are from Birkenhead, near Liverpool. Famous people from the area include: Everton legend ‘Dixie’ Dean, Jason McAteer, former Nottingham Forest captain Ian Bowyer, TV presenter Paul O’Grady and indie band Half Man Half Biscuit, whose tracks include: ‘All I Want For Christmas Is My Dulka Prague Away Kit’ and Trumpton Riots. They released an album in 2002 called Cammell Laird Social Club.

The Lairds are Sticky’s all-time favourite non-league team. Like many clubs this season, they’ve fell on hard times.

The chaps are already in the bar. The Nuclear Scientist buys me half a pint of Stella. A group of Lairds’ fans are huddled together in the corner of the bar. I ask them where their PR guy Paul McLoughlin (Glocko) is. He’s missed the team bus due to work commitments. It’s a shame because the guy is one hell of a character.

Blondie’s Heart of Glass and Coolio’s Gangsta’s Paradise are the pick of the pre-match toons. 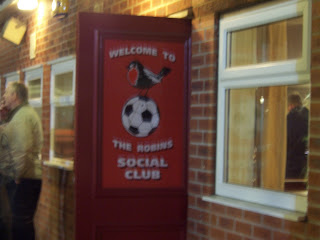 It’s beginning to spit with rain as we head out the Social Club door. It’s a sad night for The Groundhopper. Lairds’ wing wizard, the talented Eddie Jebb,has flown for pastures new. Cammell Laird have an empty pot; the most talented have departed. Eddie’s gone to Colwyn Bay. You lucky, lucky people of North Wales are going to see those driving runs, silky skills and pinpoint crosses. The boy could play in the Football League; he’s that good.

The Robins have won six on the spin and are pushing near neighbours, Eastwood Town hard. They’ve become the master of the 1-0 win, despite the loss of their manager, David Holdsworth to Mansfield Town.

Paul Hurst and Rob Scott have taken over the reins, and if anything, they now look even a harder nut to crack.

The match is being sponsored by Nottingham insurance company Clark Dove. White Van Man is tickled pink as they insure his van. 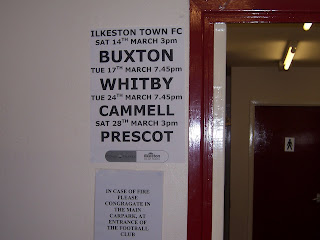 God knows what Athers will think of the game. He’s used to The City Ground and the ground hugging passes that are associated with it (pre Davies). Tonight will be hurly burly and 100mph (a bit like WVM’s driving)

The first half is devoid of any quality. Both teams try to get it down but nobody has the ability to put their foot on the ball. Athers is astounded with the levels of fitness and energy that are in abundance.

There’s a world record amount of throw-ins on our side of the pitch as both teams struggle to cope with the strong cross wind.

The game has become stale and predictable. Athers fondly remembers his trips to Royal Birkdale near Southport to watch the British Open. The three of them turn their attention to rugby union’s RBS Six Nations Championship. I yawn loudly and throw a deaf un. The highlight of the half is when Alex pops his head out of the club shop and gives all the old boys, sheltering under the social club guttering, a roasting for not getting behind the team.

There’s hardly been a shot on goal as the tallest referee in the world blows up for half-time. 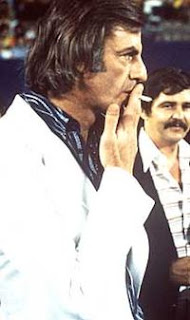 I shout four teas up and the service is swift. I treat WVM to a burger for kindly driving us all here. People are asking where the burger is; he’s wolfed it in two huge bites. He really should audition for Britain’s Got Talent.

We stand on the opposite side of the ground to the Social Club for the second half, closer to the end the Robins are attacking. I’ve been branded by all and sundry at the break for picking this game, but it’s beginning to look stretched already.

The linesman gives a couple of dubious offside decisions, but ups his game following a bollocking by WVM. Ilson take the lead eight minutes into the second half. Good work from Cahill finds Douglas who cuts inside and fires a cross field ball to an advancing Sleath, who under pressure hits a deflected shot into the bottom corner.

The Lairds reduce the deficit three minutes later with the hard-working John Corrigan peeling of a dozing Robins’ defender to nod home past a wrong-footed Arron Jameson. They miss a gilt- edged opportunity moments later with the Ilson defence in tatters.

On 65 minutes WVM remarks that ‘there’s some gripper on the western front.’ I turn round to see a good looking lady waltzing past the four of us. WVM is catching flies;he’ll be looking forward to a rub down in a Prague massage parlour this weekend. (Back massage of course) 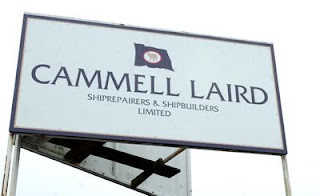 Ilkeston make a few tactical substitutions and put up the shutter doors. The game becomes scrappy and disjointed. Lairds get frustrated particularly their Number 5.

Little Sam Duncum is dancing down the wing for the Robins. He has quick feet and can use either foot. The Robins have rested up a couple tonight in preparation for Thursday’s trek up to Guiseley, the land of Harry Ramsden. It’s the Badgers of Eastwood who’ve been battered tonight by the West Yorkshire side, as the Robins chase the Badgers’ tails.

Man of the Match: Steven Istead
Posted by Sticky at 10:38 PM

Sticky, let me just get this right. You scouted a young kid, and instead of steering him to Forest's academy where he will be coached by Chris Fairclough, you steered him straight to a 'footballer' who was more renowned for his 'hairstyle' than goalscoring prowess. He couldn't hit a cows arse with a banjo and you expect him to put this raw talent right. shake of the head in disbelief!

Very amusing. CL's no. 2 challenged an Ilson fan to a fight DURING the match - any news of the result?