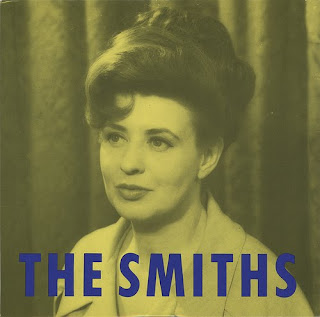 It’s an autumn Sunday morning in 1984. I’m lounging around the Men’s Bar at Stanton on-the-Wolds Golf Club. I’ve frittered away a fiver on the £100 Jackpot fruit machines and have played a couple of frames of snooker with my best pal ‘Keebo.’

We’re dating the Steward’s daughters. We enjoy the luxury of late bars and free food from the kitchen. This morning there is an exhibition match being held at the Club. Worksop pro, Brian Waites, is playing against TV ventriloquist Roger De Courcey.

An appeal goes out in the bar for someone to caddy for Roger – step forward Sticky Palms. Me and ‘Rog’ have an instant rapport. We’re on the 2nd Hole. He asks me what club he requires. I know the course like the back of my hand. He hits a six iron to the back of the green, 40 foot from the pin. 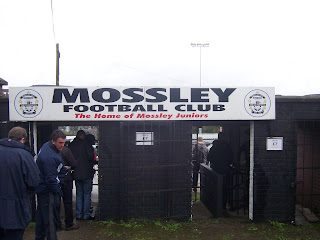 I line the putt up for him. I tell him to stroke it gently down the hill. The ball rolls into the centre of the cup. There are high fives and hugs from Roger. Sticky is loving it.

We’re on the 4th tee. It’s a tight dog leg to the right. ‘Rog’ hits one out of bounds. He asks me for a replacement ball. I’m ferreting about in his bag, pulling all his waterproofs, brolly and towels out of the side pockets. “What you doing son?” the ventriloquist enquires. “Trying to find Nookie Bear” remarks Sticky. The crowd are in stitches. “I do the gags around here” says a bemused and embarrassed Roger.

It’s Wednesday teatime. I’m all set for a Notts Senior Cup clash between Gedling Town and Radcliffe Olympic, which is to be played on the banks of the River Trent. I routinely check the excellent Football Mitoo website to see what time kick off is. They announce the game is off. The changing rooms have no water supply. 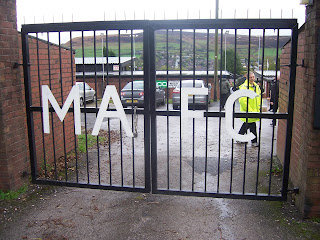 It’s a crushing blow. Last night I suffered Holby City and 71 Degrees North. Tonight my brain will be numbed even more with Waterloo Road and The Apprentice. Thank the Lord that I can bury my head into William Hill award-winning author, Duncan Hamilton’s, latest offering – ‘A Last English Summer.’

It’s Saturday morning. I have a long lie-in. No scouting. No coaching. I’m on my first groundhop in 17 days. I traipse down the concrete steps to let Finley out of his cage. The wee man’s a bit miffed; he’s moving house tomorrow, back up the steps, outside our back door.

Mrs P very kindly makes me a bacon sandwich, as I fill up the car with rubbish from my old den, which she is now renovating into a fourth bedroom. I don’t remember being consulted on this matter, but hey, I haven’t a creative bone in my body. 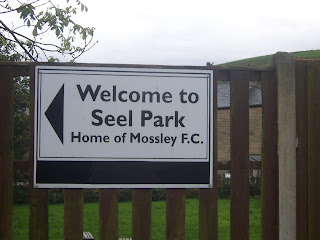 I drive down to the tip. The boot is loaded with my old computer cabinet and a huge CRT monitor. Brian Matthew is playing Frankie Valli on Radio 2. We love his 1967 hit ‘Beggin’ at work. The guy was simply miles ahead of his time.

I quickly valet the inside of the Rolls Royce, before driving round to Rammers house to pick him up. Next stop is always the highlight of the day. I toot my horn and hear a door slam. Around the corner he waltzes. His Stone Island shirt hangs out his navy blue, Nike tracksuit bottoms. He clutches his 6.3% ABV litre bottle of Weston’s cider as if it is the £113 million Euro Lottery winning ticket.

He’s reunited with Rammers; they haven’t seen each other in years. Rammers is in between jobs (part-time non-league) after a successful coaching spell with Eastwood Town. 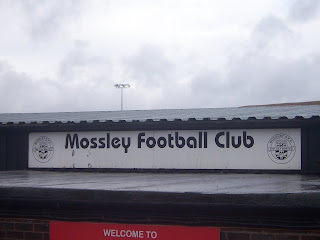 Despite it only being 11am, Trumpy has already had a couple of real ales for breakfast, at a Wetherspoons establishment in town.

We’re treated to a couple of anecdotes of his recent weekend trips to Bury St Edmunds and Llandudno. He begins to guzzle his super strength cider. He’s soon discussing his pet hate – the Labour Party. This is like red rag to a bull to Rammers. I feel like the Speaker in the House of Commons.

We leave the M1 at Chesterfield. Trumpy has a pub to chalk off in the Peak District. The setting is gorgeous as we pull into the car park by the canal at The Navigation Inn at Buxworth, High Peak. It was once owned by Coronation Street star Pat Phoenix, who played Rovers Return barmaid Elsie Tanner. 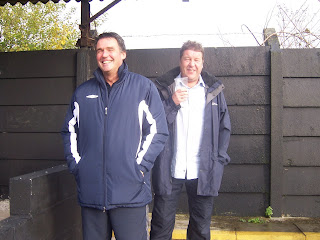 We sample real ales from Congleton and Derbyshire. The landlord flings some wood onto a roaring fire. With its nooks and crannies and homely atmosphere, we could easily have a session on. But Trumpy has another pub to tick off in Mossley.

We’re in the Britannia Inn on the main drag. The place is decked out for Halloween. The bar is rammed full of ‘Darlo’ supporters. No one bats an eyelid at Spurs v Everton on the TV. 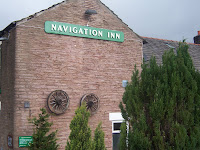 We have a pint each of ‘Summit Special.’ Trumpy selects a suet pudding to soak up his cider; Rammers and I prefer the more traditional northern fayre and plump for fish and chips. We all mop up.

Rammers speaks with a textbook north east dialect. He left his hometown of Newcastle over 35 years ago. Trumpy asks him if he practises his Geordie accent?

They’re just kicking off as we enter Seel Park. It’s £7 on the turnstile and £2 for a programme. I’m immediately taken a back by the views out onto the moors – they are breathtaking. 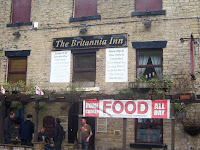 Mossley is a town in the foothills of the Pennines, on the western edge of Saddleworth Moor. It lies within the metropolitan borough of Tameside and has a population just shy of 10,000.

The model and TV presenter, Melanie Sykes was born in the town. She rose to fame as the bikini-clad girl from the Boddington’s beer adverts. On a personal note, Tameside’s first ever Co-op opened in 1856.

The Lilywhites play at Seel Park and were founded in 1903. Previous managers include: Howard Wilkinson, Dick Bate and Terry Curran. Former Manchester City winger, Mike Summerbee, famously played one game for Mossley against Crewe Alexandra in the FA Cup in 1980. 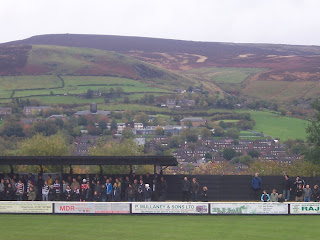 Darlington is a town in County Durham. Its borough has close on 100,000 living in it. It was once famous for its railways.Famous folk born in the town include: the actress Wendy Craig and ex Lazio defender Giuseppe Wilson (296 appearances).

The Quakers were founded in 1883 and have a somewhat chequered history. They have recently been relegated to the Blue Square Bet Conference Premier League.

We walk in an anti- clockwise direction, past the goal that the Lilywhites defend, which also houses the numerous Darlington fans that have rocked up today. We’re perched up on the top of the terrace, with our backs facing the Pennines. 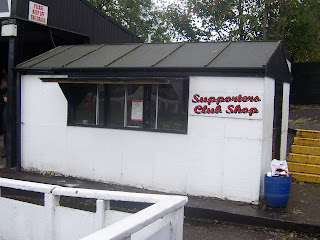 Mossley are on top in the opening stages. Darlington ‘keeper Sam Russell is tested by Chalmers from close range. The game turns on its head on 25 minutes when the visitors take the lead against the run of play. Livewire striker Chris Senior whips the ball off the toes of Andy Watson, but is upended by the Mossley goalie. The referee has little alternative but to brandish a red card.

Tommy Wright is about to take the penalty. Aberdeen once paid £100,000 for his services. He’s clearly someone the Quakers’ fans hold close to their hearts -“Come on Tommy you big, useless twat” shouts out a Darlington wag. He puts the visitors one to the good.

On the half hour, former Port Vale, Carlisle and Bradford City midfielder, Marc Bridge-Wilkinson, seemingly puts the tie to bed. 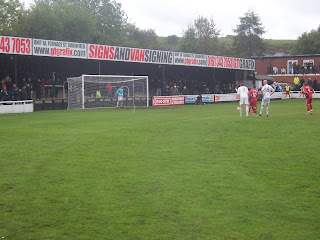 One or two squally showers break out. Rammers protects his fading sun tan by scurrying for cover. Five minutes before the break a plucky Mossley reduce the arrears with a fine strike from Mike Oates.

Trumpy’s got a thirst on. I shout him up a Guinness (in error) and leave him to sulk in the bar with Chelsea v Wolves on Sky Sports Germany for company. Rammers is checking the non league scores on his i-Phone. I take a stroll and a few piccies. I’m hunting down Mossley’s favourite postie, Mike Smith, from the excellent Six Tame Sides blog. There’s no sign of him amongst the 615 attendees (looks like there is a lot more here than that).

We stand on the opposite side for the second period. I could quite happily die on the spot, looking out to the hills of Lancashire. 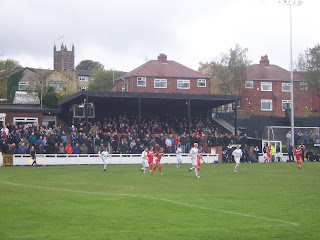 Rammers has commented that the Lilywhites can’t cope with the movement of ex Altrincham striker Chris Senior. He gives his side a two goal cushion on 48 minutes.

Trumpy has returned from the clubhouse with two stragglers in toe, who recognise his picture from my blog. It’s the second time in Manchester that a stranger has walked up to him in a bar and enquired: “Excuse me, are you Trumpy Bolton?” Henry and Alex are groundhoppers from Leeds. They prove to be excellent company.

Trumpy is miffed that Henry and Alex are sober, despite catching the train from West Yorkshire. He asks them if they would like a J2o orange from the bar. 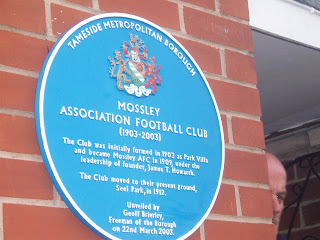 The Lilywhites’ never-say-die attitude earns them another goal, with Steve Settle cracking home an effort from 15 yards.. All five of us raise our arms and cheer.

Big Kevin Austin (what a player he was at Lincoln) gives a jittery Darlington a two goal lead on the hour. Shortly after it’s daggers drawn. Mossley’s Chris Rowney commits a dreadful challenge. A few handbags are slung in the Rovers Return Snug. Two more are off for Mossley. They are eight men standing. A Quaker has thrown a haymaker that is missed by the officials.

It’s shooting practise for the visitors. Gary Smith smacks home a 25 yard drive, whilst Senior completes a brace of goals for the afternoon. 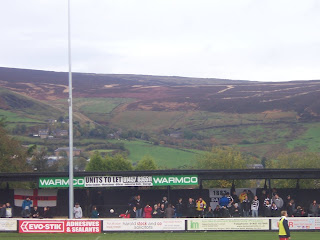 Don’t be hoodwinked by the score line. A shaky-looking Darlington won’t be returning to the Football League on this showing.

Man of the Match: The Mossley PA announcer, who according the Non League Paper shouted on the tannoy following the third Mossley player to be sent off: “I don’t believe you referee, you’re turning this into a farce.”
Posted by Sticky at 7:23 PM

Seems you had a good time Sticky, hope the rabbit settles down?

Lost in the crowds I guess - hey ho - when you doing Ashton United !!!

Great review as always and nice to meet u all on saturday.Keep me informed with your plans for guiseley i am going to the boston game on the 2nd of november but it might be a bit difficult for u on a tuesday night.Say hi to trumpy for me the guy's a legend.

Did you know that ESPN has 2 games for the first round proper whilst ITV only has one. I think it is crazy that one of the most British competitions on the earth has been given to the Americans!