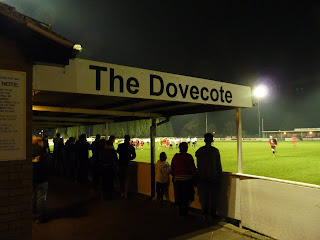 We’re ambling along the bottom of the Main Stand at Hinckley’s Greene King Stadium. Gresley have conceded a 95th minute equalizer. One or two Moatmen supporters shower abuse on the referee. Their coaching staff are waiting for a quiet word with the man in black about the amount of added time.

Some guy has phoned his missus up to complain about the injustice of it all. I bet she’s holding the phone away from her ear whilst she watches those two clowns off Masterchef.

I’m anxious to know the score from the Withdean Stadium. Table-topping Brighton Hove Albion are entertaining Notts County. I fire up the ‘Rolls Royce’ and switch on the radio. Mark Chapman is presenting a show all about ‘Dirty Dirty Don Revie.’ 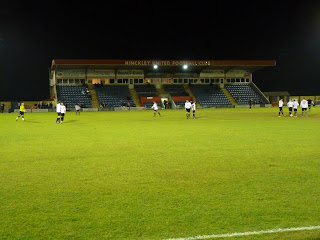 Five Live wheel out a few of Revie’s foot soldiers - Eddie Gray and Peter Lorimer sing his praises. They talk about the team spirit, the bingo, the crazy golf and carpet bowls. They don’t mention the bribes and the match-fixing allegations. We finish the night off with a pint of London Pride at the Plough Inn at Normanton on the Wolds. The Pies come back from Brighton empty-handed.

I spend an hour on Thursday evening sitting in the White Horse at Ruddington, whilst ‘The Skipper’ runs his butt off at training for Clifton All Whites. I’m reading the 2009 William Hill Sports Book of the Year. It’s a biography of Bodyline Test bowler Harold Larwood, superbly written by former Nottingham Evening Post journalist Duncan Hamilton.

Hamilton grew up to in our village and was the son of a coal miner, as was Larwood. My father taught him shorthand. He’s probably the best sports-writing author in the business right now. 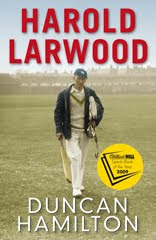 He tells a story of how Larwood walked 14 miles to Trent Bridge one day, just so he could see his hero Jack Hobbs. He paid his money at the gate, and took his seat in the Parr Stand. Hobbs was out first ball. He walked the 14 miles back home to Kirkby in Ashfield.

It’s Friday, and I excitedly wait for my first trip to The Dovecote this season. I spend a few hours in our Warehouse at work with Ergo legend ‘Shifty Edwards.’ It’s ‘Funky Friday’ and he’s spinning a few Northern Soul classics. He comes over all emotional when I present him with some marble cake I’ve bought from a bakery in Ruddington.

I’m back in the White Horse again at lunchtime. ‘The Reaper’s dog, Betty slurps half a pint of real ale down her neck. She’s zonked out in the back of the car for the rest of the afternoon. 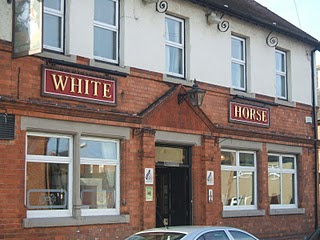 New Zealand are through to the Cricket World Cup semi-finals. South Africa have choked more times than White Van Man has on a beef and onion Pukka Pie.

I enjoy the cycle home from work, despite the unforgiving steep hill into Keyworth. I’m buzzing, and so is Mrs P; she’s having a night out in D***y with all her friends she used to work with at the Equitable Life Assurance. I was hoping Sticky junior and ‘The Skipper’ would join us at The Dovecote, but they’ve about as much interest in Non League football as David Cameron has in the Public Sector.

Sticky jnr has nipped into town to collect some tickets to watch Plumstead rapper Tinie Tempah in concert at the Capital FM Arena. All his mates are coming round ours tonight. Bloody hell, I best hide all my beer away or they’ll trash the joint. 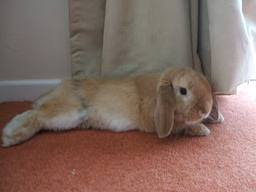 I don’t bother asking Finley for a score prediction, after his pathetic attempt at the Stalybridge v Hinckley game. Anyway, he despises teams from Leicestershire, because that is where lots of foxes live.

White Van Man arrives executive style. I throw my gear in the back. We head up to Selby Lane to pick Screats’ Dad up. His lad, Iain Screaton, is Shepshed captain and a close friend of WVM. He’s a cracking lad.

WVM has got Gem/Heart FM on. He shouts out “Toon” as Leicester bad boy Mark Morrison’s ‘Return of the Mack’ blasts out the speaker. It’s a short 20 minute drive through the rolling Leicestershire countryside. 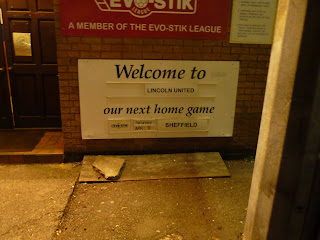 It’s £7 on the gate and £1.50 for a disappointing programme that’s half-full of adverts. I shell out £1 for a Golden Goal ticket. You’re guaranteed to hear the ball rattle the net at The Dovecote. It’s normally the opposition that score though.

Shepshed have had an annus horribilis. Money has been tight and there has been a management merry- go- round. Dave Frecklington (brother of Lee) has just been relieved of his duties. At the minute, I think the Secretary is in temporary charge.

Was not Was is on the PA system. I notice that top woman referee Sian Massey is taking charge tonight. I double- check the programme to see if Keys and Gray are her assistants. “Do me a favour love.” 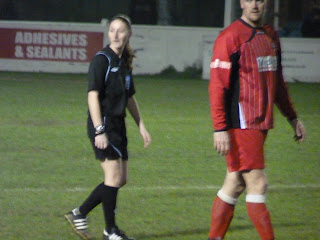 I saw Sian, notice how we’re on first name terms, have a cracking game at Rugby v Bedworth back in the autumn. She and Screats have previous. I’ve had a soft £5 at Corals that Screats will get booked. He doesn’t normally let me down.

The first half is an open and entertaining affair. I’m stood with Big Darrell. We’re laughing about our trip to Market Drayton last season, when the referee sent three players off.

Shepshed give a good account of themselves. Brewer screws a shot horribly wide when it looks easier to score. Hodgson forces a good save from Turner, whilst Sam Carter fires an effort inches over the bar.

Lincoln take the lead on 20 minutes (I’m ten minutes out on the Golden Goal ticket). Scott Coupland beautifully threads a ball through to an unmarked Jack McGovern, who dispatches a shot into the bottom left hand corner of the net. 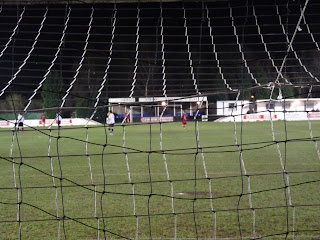 I’m taking a stroll round this wonderful old ground. The air is still and the church bells are chiming. Leylandii tower above both goals. Huge nets are erected behind each goal to stop stray balls from leaving the ground. White Van Man has missed out on a viewing of the Shepshed WAGS.

I have a chat with a few disillusioned supporters, who are hurt by the perilous position the Club is in. I used to enjoy the message board that Andy Mac ran, but a few idiots from other clubs ruined that too.

Screats has clattered into the back of someone and has given away a needless free kick. McGovern bags his second of the evening, lifting the ball over the wall and into the top right hand corner of the net. 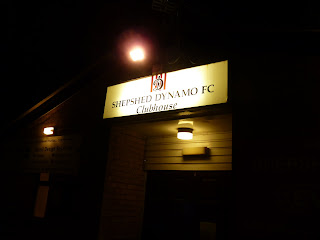 I find White Van Man sitting in the corner of the Social Club drinking a can of Diet Coke. Coronation Street is on the box. Top trainspotter Roy Cropper makes a welcome return to action. I notice a chap dressed in a green crocodile suit queuing at the bar. He’ll probably just want a snack.

Sticky jnr texts in asking if he can open a bottle of beer he’s discovered in the kitchen. For any policeman or social services people who read this blog, I reply with a firm NO. He’s a good lad. I know he won’t try it on.

I leave WVM to watch part two of Coro. The Shepshed DJ is playing the dreadful ‘Every Loser Wins’ by Nick Berry. He should be lined-up for the firing squad, not the Shepshed strikers though, as tonight they couldn’t hit a cows backside with a banjo.

The second half is as bad as the first half was good. Neither team makes any impression. Lincoln don’t need to as they are condemning Dynamo to their seventh consecutive defeat. 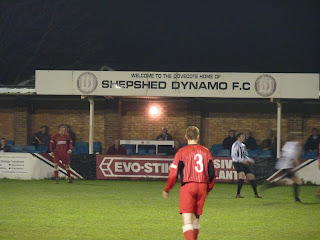 The moment I have waited for arrives on 80 minutes. Screats has clattered another opposing player and Sian has had enough. After being grassed up by the Referee’s Assistant, Sian invites Screats into the office. She correctly waves a yellow card. I’m laughing my head off.

We finish the night having a couple of jars in the Club. Screats joins us. He’s always got a smile on his face, even in defeat.

The Lincoln players drink in a large group. Former Lincoln City legend Terry Fleming is amongst them. He was a crowd favourite at Sincil Bank because of his never-say-die attitude. He’s manager now, but still turns out at full back at the age of 38.

The pack of Black - Berry Play - Book Tablet 64Gb is included with a screen
wipe, a pouch case with foam based material, charger, USB cable, and instruction guide.
It consists of the 1GHz dual core processor with the RAM of
1GB, in order to operate most complicated and challenging applications.
Sources demonstrate that this newly designed solution designed to offer a
streamlined framework for enterprises to unfurl mobile apps for Blackberry Play - Book tablet users within the organization.

Section 1 - Choosing the Monochrome picture Control Section 2 - Modifying the Monochrome Picture Control.
The Power - Shot SD890 IS Digital Camera is on the cutting edge of
Canon technology, being the only of its class to offer a full 5x digital zoom.
Well Canon, hate to say it, but most amateurs don't like to haul around an external flash unit.

The canon 5d mark iii is far better at high
ISO than the Nikon D4, period. The Olympus E-3
contains a two and a half inch LCD screen, which is just a
little bit smaller than its competitors, however, this didn't bother me. When High-pace mode is engaged, a smaller yellow LED lighting up (you are going to even be alerted to the display).

Is it an advantage or disadvantage to save everything on the
web. The introduction of the Samsung Chromebook into the
marketplace signifies a shift away from the traditional
concept of a laptop where the devices itself stores all of the information
that you require. If the system is just in sleep mode
then the resume time is instant.

Suppose you created a group called Pals that included
your best friends. This article lists the most promising and thought provoking
tech gadgets available for under $100. In this day
and age it is impossible to stay on top of all the latest pieces of
technology.

You can easily program your NFC chips to perform particular functions such as:
. Irrespective of class and standard, this most significant communication
tool is now important for all as we need food, water, shelter etc.
Speedy shutter response times and also rush shot modes
even help produce pro-quality pictures.