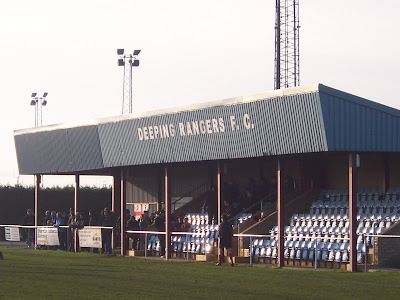 I had a day with the family last Sunday and tried to put behind me that dreadful game White Van Man picked at Hucknall last Saturday. We nipped into PC World, as I’m hanging my nose over a cheap laptop. I said to the salesman give me your best pitch. He failed miserably and I walked out the shop empty handed. We had some cheap vouchers, so had a half price meal at Pizza Hut. We nipped round to the Nuclear Scientist’s to watch the Liverpool v Everton game on Setanta; it was average. 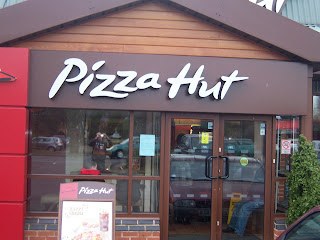 Good and bad news to report on Mrs P’s television schedule. After over 15 years of tossing it off, and making more cups of teas than arrests, ITV have announced that the axe has finally fallen on quality TV drama Heartbeat. PC Alf Ventriss will never boil a kettle again. Hip hip hooray to the BBC, though, for their excellent third series of Not Going Out written by and starring northern comedian Lee Mack. The gags are rapid fire; they even brought a smile to Mrs P’s face.

BLOG celebrity Trumpy Bolton has been pencilled in for the trip to Market Deeping for over a month now. I’ve already arranged to pick him up from his girlfriend’s house in Cosby, Leicestershire. He’s tipped me off that he won’t be a picture of health, as he was on a nine hour bender yesterday. It was someone’s 21st birthday party. It was staged at Leicester City’s Walkers Stadium, at one of the banqueting suites. Apparently it was ‘The Foxes’ biggest crowd of the season. 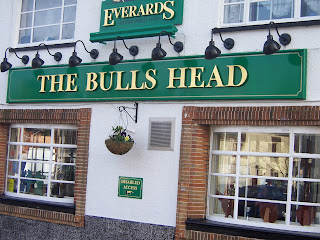 Mrs P has gone shopping with her mum in Loughborough. I ask her kindly if she can bring the Rolls Royce back for midday. I do a few chores around the house and take Mrs P’s empties up the bottle bank. Trumpy phones up. I wish he’d text as he would make more sense, even if the letters were jumbled up.

The Architect arrives and we head across to Leicester. Stoke are playing Man City at the Britannia Stadium; it’s on 5 Live. 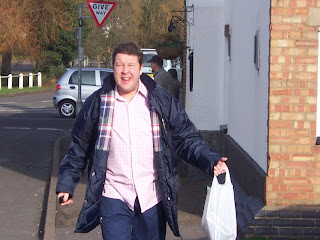 We soon arrive in Cosby and have arranged to pick Trumpy up, surprisingly, at a pub; it’s called The Bulls Head. He comes stumbling out the door, almost falling down the steps. He‘s carrying a white plastic bag. He has a bottle of cider inside it. It’s only 1pm and he already confesses to having downed two tins at home and a couple of pints in the pub. The white plastic bag might come in handy at this rate as a sick bag.

There’s a bit of a commotion on the radio, long-throw specialist Rory Delap has been red-carded. The Potters have took the lead though James Beattie. Mark Hughes will be under scrutiny again in tomorrow’s Sunday papers. 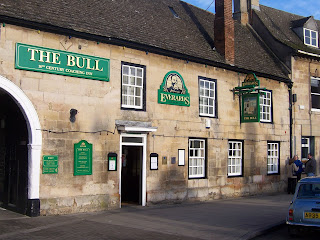 We eventually pull up in Market Deeping and park in the picturesque square. Trumpy’s got his eye on The Bull. His ambition in life is to make a credit card transaction in every village in England; they don’t do credit. The Architect is a relieved man as this establishment had a few unsavoury characters in the bar area.

We stroll around the corner to the delightful Old Coach House; we are made to feel welcome. We watch the dying moments of Man City’s latest disaster. Trumpy stares into space and not into his pint. His day worsens when he gets the hiccups I gate my Kronenburg 1664. 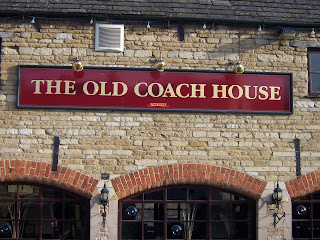 The Factory Manager knows his way to the ground and leads the way. It’s about a mile away on the outskirts of the town. He’s an old school friend and lives in Whittlesey. His step son plays for Deeping Rangers Reserves.

Market Deeping is an historic town in Lincolnshire and lies on the banks of the River Welland. It has a population of over 6000 people.

Deeping Rangers were formed in 1964 and have played at Outgang Road since 1985. They currently top the Eagles Bitter United Counties Premier League. They were winning at a canter but have stuttered of late as the chasing pack close in. Recently released Leeds United striker Malcolm Christie once played for the club before moving onto Nuneaton, D***y County and Middlesboro. 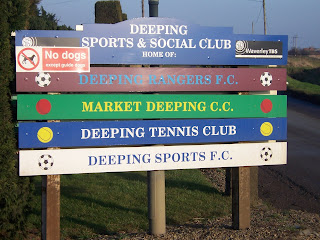 Today’s visitors Cogenhoe are from Northamptonshire (pronounced Cook-no). Former Blue Peter presenter Peter Purves once lived in the village. Graham Taylor’s yes man, ex-Liverpool defender Phil Neal, was once president of the club. Watford’s Darren Bazeley is among a number of former youth team players who have made a living from the game.

The car park is a mass of mud and water. It has rained heavily in the earlier part of the week. It’s £4 entry (cheers Trumpy) and £1 for a decent programme (Cheers Architect). 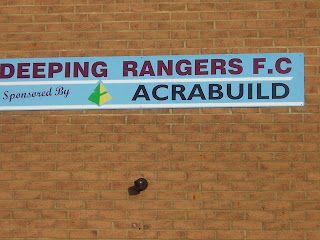 Deeping Rangers FC is part of a complex which has a cricket ground and tennis courts. A young lad is being coached and catches Trumpy’s eye. Trumpy was a fine player in his day, sadly he called time on his career over 30 years ago. His tennis playing days met a premature end when the club unveiled its new licensed bar. He tries to roll back the years and coach the young lad; the coach is not amused.

Trumpy has a long blue coat on. It has a Leicester emblem on it. A lady selling raffle tickets asks him if he is a scout. 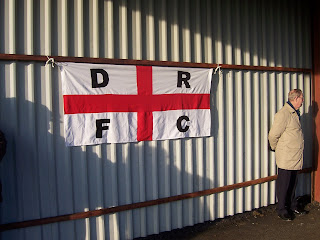 Someone shouts the teas up as The Factory Manager and The Groundhopper survey the surroundings. The ground is impressive and is bordered with ten foot conifers.

Trumpy has gone AWOL as Cogenhoe kick-off proceedings. They are awarded a penalty in the first minute, when their forward is upended. The goalkeeper is sent the wrong way. Trumpy comes waltzing out the Refreshment Bar and appears unfazed he’s missed an early goal. He walks past the home ‘keeper and chants: “you’re not singing anymore.” The goalie is pissing himself. 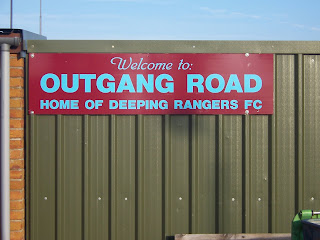 Cogenhoe string a few passes together. Their centre forwards have flicks, tricks and pace.

We stand next to the away dugout. Trumpy is hanging now and has already introduced himself to the Cogenhoe management team. He’s took a particular liking to coach Ian Blair, who appears as eccentric as Trumpy.

The standard of play on show is not as great as Glossop North End, Bridlington Town or Dinnington Town, who all play at Step 5. It is on a level to Stewarts & Lloyds, who I saw a few weeks ago, perform poorly at Glossop. 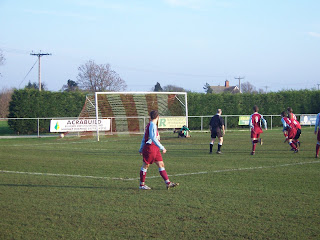 Cogenhoe are cruelly denied a second goal with a clearance off the line. But Rangers are beginning to find their feet and are peppering the visitors’ goal. Most of their shots are aimed straight at the ‘keeper. Trumpy smells danger and instructs ‘The Cooks’ substitutes to warm-up.

Belfast born former Posh and Imps winger Ryan Semple is on the wing for Rangers today. His pace and technique are beginning to bother ‘The Cooks.’ His crosses are searching and meaningful. 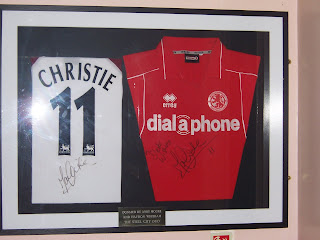 We all potter round to the Deeping Sports & Social Club. It’s all very lah- de- dah. They have a proper steward on duty in a blazer and tie. It’s the first time in a while that I’ve seen real ale for sale. I’m driving though, so settle for a half a lager.

Lincoln, Forest and Notts County are all losing. Trumpy has made a slight recovery and is tucking into a JHB Bitter from Oakham. Signed shirts by Malcolm Christie hang in frames on the wall.

We leave Trumpy in the bar and go and ask the lady for the raffle numbers. Trumpy has missed out by one strip of tickets. It’s a huge relief as the first prize is bound to alcohol. 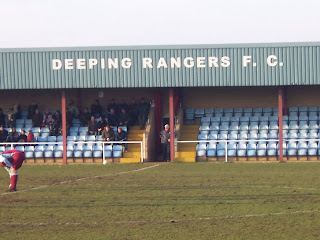 Deeping continue to press the game. Coegenhoe play too deep and too narrow. They’ve lost their spark and energy and look vulnerable. With 25 minutes remaining Rangers are back on level terms with Ashley Stevens lashing the ball home. The DJ plays That’s The Way I Like It by KC and the Sunshine Band. Dave Cornell puts the home side ahead on 79 minutes following a cross from Semple who is now running the show. This time we are treated to the Austrian born DJ Otzi.

The game is all over 81 minutes with Ashley Stevens scoring his second of the afternoon from the penalty spot: Cue Tom Hark from Brighton band The Piranhas. 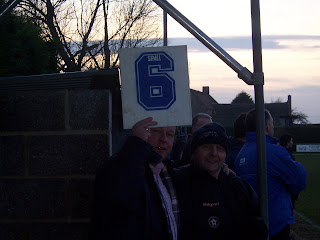 Trumpy has rejoined us by now. He’s trudged his way round the ground and barged his way through the technical area. He’s been telling the stony-faced Cogenhoe manager Darren Collins how he’s got his tactics wrong. He wrestles with Ian Blair over the number cards for the substitutions. Blair lets him hold up the numbers.

Ryan Semple sends in an inch perfect cross at the death, it’s teed up for giant striker Sam Bettinson to head home.

The match has been excellent and both teams have played their part but there can only be one man of the match.

Man of the Match: ‘There’s only one Trumpy Bolton.’
Posted by Sticky at 9:00 AM

My grandad was surprised to be photographed in the Photo of the DRFC flag....