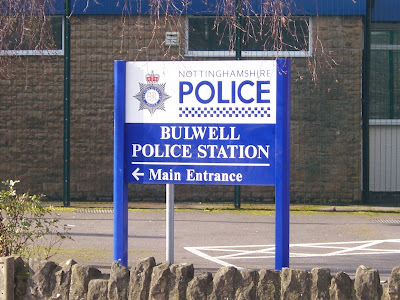 It’s Friday evening and Groundhopper has got the face on. It started so well with a couple of cans of Kronenberg 1664 and quick surf of the ‘net’, whilst listening to the Simon Mayo Show.

We have chicken fajitas with cheese, red onion, peppers, sour cream and salsa. But now a dark cloud has descended on our living room. A cloud that hangs around for two hours. I’ve had to sit through a double helping of Coronation Street and EastEnders. It’s meant to be entertaining. Nobody’s laughing or joking when Bradley swallow dives off the Queen Vic roof or when Joe is found floating on top of Lake Windermere.

Another person not laughing is ‘The Skipper’ who has been asked explain an extortionate phone bill that he’s ran up. He’s banished to his bedroom and his piggy bank is raided. 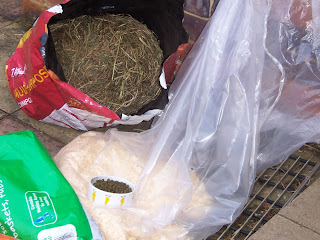 It’s Saturday morning. Finley the rabbit is cock-a-hoop: his team Bury won last night. This morning his living quarters get their weekly valet from Sticky Palms Cleaning Services Ltd. The little fella does a bunny hop and lands on his back; he’s so pleased to see me.

He starts to break-dance like Leroy off Fame. His body and head spin round and round. His paws point upwards. People have said to me to get him on Britain’s Got Talent, but I don’t want any complicated contractual negotiations with Simon Cowell.

Finley has already wolfed his breakfast. He’s now standing on all-fours begging for some chews. But before Groundhopper hands them over Finley has to predict the result of today’s game. He has divided loyalties. When we go on holiday he’s looked after by two police officers (my in-laws). Finley puts his prejudices to one side and predicts a 4-1 thumping for the Plod. 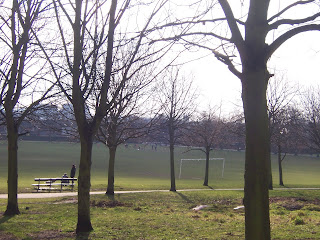 I feel under the weather. There’s been a heavy frost which has put paid to my trip up to Mansfield. I arrange instead to meet my boss, Mick, at Vernon Park, in inner city Nottingham.

Before leaving the house I check my car tax disc is valid and that I’ve legal tread on my tyres – those boys in blue are never off duty.

My brother-in-law is a policeman. I was going to ask him to join me, but he’s too busy reading the Daily Mail and watching the ‘rugger.’

I drive past the Queens Medical Centre. The traffic surveillance unit are setting up their speed cameras. 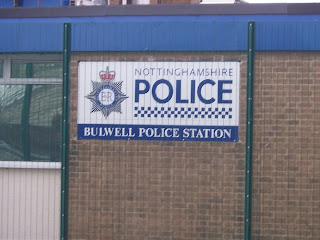 It’s only a twenty minute journey but it stills gives me the chance to listen to Five Live smooth operator Danny Baker. Today he’s talking about how glam rock music carried its tunes onto the football terraces. For example ‘Ooh Teddy Teddy ......... Teddy Teddy Teddy Teddy Sheringham is in fact from the song ‘Son of My Father’ by Chicory Tip.

Vernon Park is a hive of activity. There’s a soccer school on for the young ones, while on an adjacent pitch an under 10 game is taking place. Mick turns up and we adjourn for coffee. Mick’s got the hump as he is entertaining a guest down at The City Ground this afternoon where the Tricky Trees pit their wits against Middlesbrough. Groundhopper was at the reverse fixture earlier in the season.

I like Vernon Colts and particularly their Irish chairman Pat Gordon. Notts County raided their club when they re-opened their centre of excellence. We have tried to repay them by donating balls, kit and equipment. Mick even arranged for Sven-Goran Eriksson to present their charter standard award a few weeks ago. 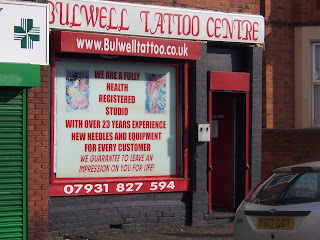 I drive over to Bulwell to take a few snaps. I pass the Bulwell Tattoo Shop – I bet they do a roaring trade in there. I nip to the cop shop. There’s not a boy in blue in sight – it must tea break again.

I drive back to Vernon Park to watch a 12.30pm kick off. Sticky junior has a game at 1pm at the glorious setting of Wollaton Park. It has stunning views, roaming deer and a demanding 18 hole golf course.

It’s a brave effort by junior’s team. They’re beaten 4-2 by Wollaton Hall u14s. Nothing floats my boat. A Forest scout stands across the far side of the pitch. The surface is too tacky for Sticky junior to display his dribbling skills. He sensibly sticks to a short passing game. 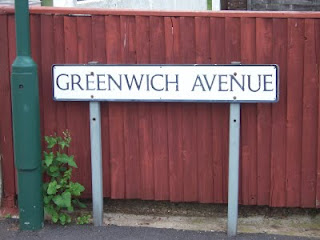 I’m soon back on the ring road heading back down to Basford. I turn right, past Stockhill Fire Station, and navigate my way onto Greenwich Avenue.

Bulwell is a market town on the northern edge of Nottingham. It has a population of 30,000. It once had a coal mine, brewery, landfill site and quarry, which employed local residents. Arsenal’s 1971 double-winning manager, Bertie Mee, was born in the town.

The Scots Grey pub, in the town centre, won the FA Carlsberg Sunday Cup in 2009, in an exciting final held at Liverpool’s Anfield Stadium. I saw them win their quarter final tie down at Greenwood Meadows’ Lenton Lane ground – they looked a cracking outfit. 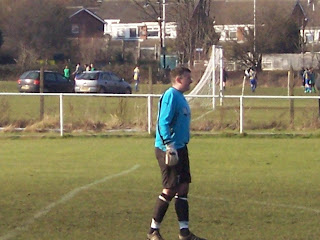 Basford United Reserves are playing on one pitch, while to the far right Caribbean Cavaliers u11s entertain Holy Spirit Celtic. Sandwiched between the two is the big match.

There’s no programme been issued today as the guy who writes it is stuck at work. I get chatting to a Police fan and a Bulwell supporter.

The Police do well to raise a team. One or two will be on Smog patrol at The City Ground; others unavailable include: Officer Dibble (cat-sitting) PC Alf Ventress (on a tea-making and biscuit buying course) and PC Rowan (on a Club 18-30s holiday). 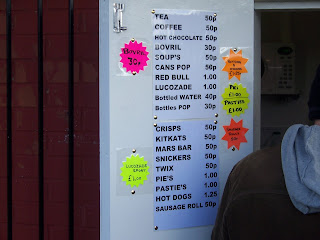 Bulwell are still riding on the crest of a wave after an injury-time winner a few weeks ago against their landlords Basford United caused a few dollies to be thrown out the pram. It was all played out live and exclusive on the world’s best message board, following a skillful piece of copy and pasting by the NSL press officer. One or two took the hump and the thread, much to Groundhopper’s disappointment, was removed.

At least the tea urn has found its way out of the pram and back into ‘Tony’s Teahut.’ The tea pot fails to make an appearance, but at least the brew is wet and warm.

I notice, as the Police take the field, that one or two of their bigger lads enjoy the guilty pleasure of a hearty fry-up in the works’ canteen: note to chief constable, let’s get these boys back walking the beat or riding a bike, like they used to in the Meadows area of Nottingham a few years ago. 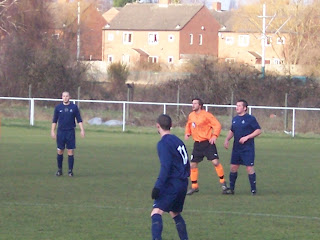 I recognise today’s referee. He’s more familiar to junior football. Bulwell v Notts Police may be out of his comfort zone. He’s certainly not in the mood for a laugh or a joke. It takes the Police 5 jacket approximately 2 minutes to cheese him off – it’s the first of many cautions.

Gretton is the second player booked on five minutes, after a clumsy rather than malicious challenge. The referee has chosen to set a dangerous precedence. I’m stood next to Stuart Gretton’s dad – he’s fuming. 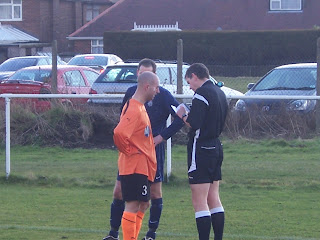 Bulwell are bang in form, having only lost twice in their last 13 outings. Notts Police arrive here on the back of five straight losses.

I elect to stretch my legs and take a stroll around a bustling Greenwich Avenue. Bulwell manager, Geoff Pallett, is leant against the railings chatting to the NSL chairman and FA Council member, Kevin Presland.

Geoff is serving a six week ban following an indiscreet remark made to a linesman. Part of the ban includes remaining 10 metres away from the dugout. He’s a lovely chap, with a passion for the game. He’s fostered a genuine, harmonious team spirit within the club. Bulwell seem happy on and off the pitch. They all sink a few pints after the game at the nearby Lime Kiln public house. 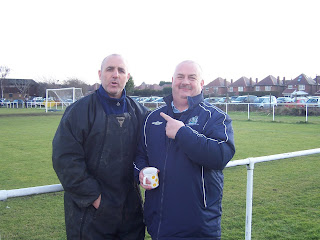 Bulwell are soon in front. A free-kick is floated into the box and is headed home, unchallenged, by Stuart Gretton for the opening goal of the game.

Notts Police’s best efforts are from distance. They fall further behind before half-time with a blistering free-kick from lively winger Danny Fuller.

I’ve not eaten since breakfast. Tony at the tea bar twists my arm and forces a pie down me. We’re in no rush as the Police will wants at least two brews before they return to action. 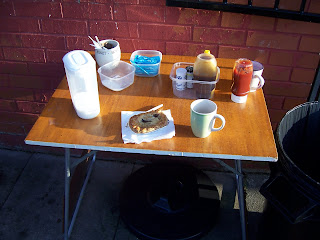 The second half flows beautifully. New signing, Ady Carter, for the Police, plays on a different planet. His movement is sublime, his touch exquisite and his passing is often first time. He is head and shoulders above anyone on the pitch.

He reduces the deficit with a shot from a standing start which arrows into the net. Bulwell are on the ropes for a ten minute spell but tight offsides and decisions going against them frustrate the Police.

Bulwell’s equivalent is Alan Jeffries. His raking passes to the wing and time on the ball suggest he has played at a higher level. 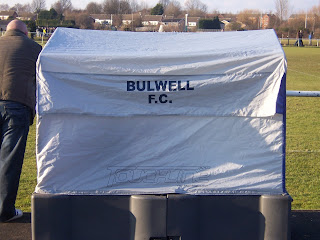 Bulwell find another gear but are met with the agility of Police ‘keeper Joe Parlatt. He pulls off a string of fine saves off but is finally beaten from close range by Gretton.

The scoreline is a fair reflection of another excellent game. Sticky loves the NSL. He only needs to tick off two more grounds to complete his set.

Man of the match: Ady Carter
Posted by Sticky at 5:07 PM