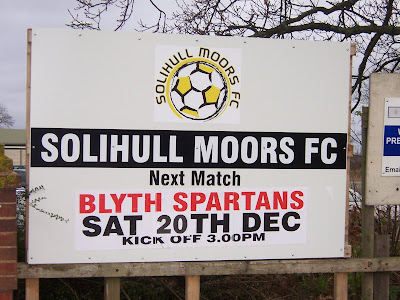 We were introduced to one another over a year ago; I fell in love with her immediately. Every day I used to caress her and hold her. I would say goodbye to her on a Friday evening, as we were kept apart at the weekend. Our relationship would be rekindled on a Monday morning. It all came to an abrupt and sorrowful ending on Thursday lunchtime. I walked through the door, I could hear people saying: “Who’s going to tell him?” And that’s when I saw her, sitting alone and forlorn, minus a spout. Yes readers, you’ve guessed it, some idiot at work has dropped my teapot. Not any old teapot, but a top of the range one from Denby Pottery in D***yshire. You could get five cups out of it. God I miss her. 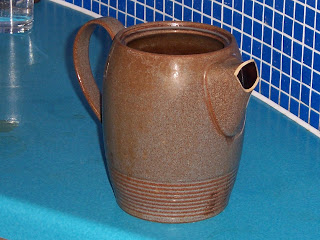 I’ve took my foot off the gas on the scouting front recently; I’ve got that Christmas feeling. Games have been cancelled due to waterlogged pitches. I will take in a game on Sunday and give it full throttle after the Christmas festivities.

I’ve been like a little lap dog this week and have sat on the settee with Mrs P watching Rick Stein, Nigella Lawson and Jamie Oliver cooking Christmas dinner. I’ve an action packed schedule coming up: Solihull on Saturday, works’ party on Sunday and a few drinks in West Bridgford on Tuesday night with the lads. I have to keep the good lady sweet. 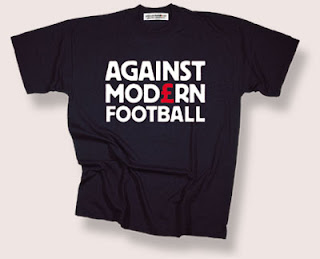 It’s Saturday morning and I‘ve got my head down, working my bollocks off, to earn the pass -out to Solihull. Lincoln City are playing ‘The Pies.’ I should be down there, but let pride get in the way. I’ve never paid a penny into that club’s coffers since they closed down the centre of excellence. I pray to God that we win, and that one of our old youth team players scores the winner.

I nip up the cashpoint; it made the headlines news the other week when it paid out double what you asked for. They were queuing up all night to have a go. No such luck this morning for Sticky Palms.

The Architect picks me up at 11.45am. We’re off to his brother’s house, en-route to the ground, to drop off some presents. His brother is an estates manager at Wroxhall Abbey, close to the charming and affluent village of Knowle, near to Solihull. 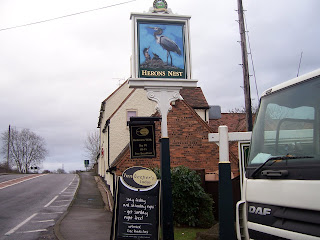 We pull into the farmyard; I’m fully expecting Hugh Fearnley-Whittingstall to pop out of his River Cottage with some honey-spiced figs or medieval gingerbread. We nip in for a quick cup of tea. I’d mark it with a seven out of ten. The Architect’s nephew is showing us his nativity play on DVD; it’s a bit of a Harry Hill yawn moment off his Burp TV show.

I treat The Architect to lunch at the nearby Herons Nest. We have Brie and bacon melt, washed down with a shandy and a Stella for Sticky: yes I’m back on form. I sit in a Chesterfield leather chair; I feel like Rowley Birkin, QC, off The Fast Show. Rod Stewart is singing Blue Moon on a CD that’s spilling out from the bar area.

We arrive at Damson Park forty minutes before kick-off and pull up in the main car park. There’s no charge for parking. I have a quick wander around and take a few photos whilst The Architect waits patiently. 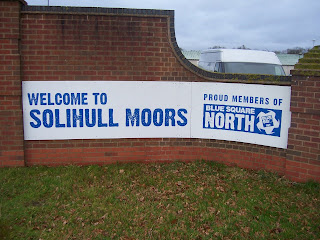 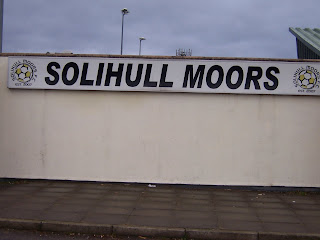 It’s £10 on the gate and a pricey £2 for a programme, which actually turns out to be gem. We stroll past the social club, and head for the tea bar. The tea’s not as good as what Hugh served up earlier; I’d give it a six.

The players are warming up. Former Aston Villa and Blackburn Rovers striker Graham Fenton is doing all the Blyth Spartans drills: I bet he can’t wait for the third round FA Cup tie at Croft Park against Big Sam’s Blackburn. They have travelled 221 miles to be at this ground today. 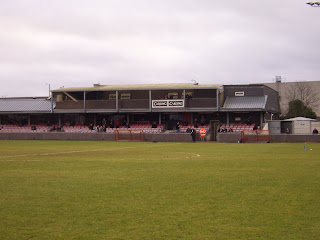 Blyth is in Northumberland, 13 miles north east of Newcastle. It has a population of 35,000. The club were formed in 1899.Despite their lowly League position they have enjoyed an epic FA Cup run. They are managed by part-time school caretaker Harry Dunn.

We observe a minute’s silence for the sister of the president, who died suddenly at the age of 85.

Blyth Spartans are not sporting their famous green shirts; they play instead in a horrible yellow and red strip. The game has a nice ebb and flow about it. Both teams keep it on the deck, and opt for a fast passing game. 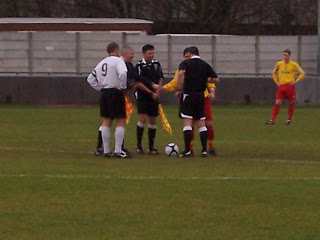 Spartans have shots from Dale and Reay flying over the bar. Dale is a gangly 6’ 6” but he has a great first touch and is no slouch with the ball at this feet.

They finally take a deserved lead through their impressive pocket rocket, left winger Carl Motteram. Blyth have been giving the ball away in midfield with some suicidal passing, Motteram seizes upon a Richards misplaced pass and rifles a shot in from the edge of the area. 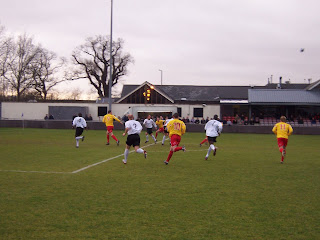 Blyth hardly fashion a worthy first half chance. Their performance is flat. They lose the influential Alex Gildea to a hamstring injury; they shuffle their pack without success. FA Cup hero Ged Dalton looks their stand-out player out on the wing, and he’s having a terrific tussle with Solihull Moors left back Michael Tuohy.

We pop into the social club. The Architect shouts up a coke and half a Guinness for The Groundhopper. I’ve got the butterflies waiting for the latest score from Meadow Lane. Somebody texts me, ‘we’ are one up. ‘Our’ gypsy king, Adrian Patulea the 24 year old Romanian has scored the vital goal. 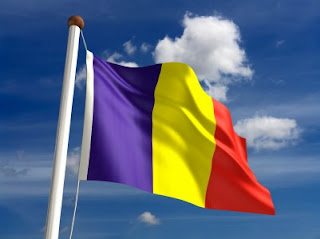 Solihull Moors social club has the most interesting memorabilia on the walls and ceiling in the room. They have hundreds of signed football shirts. A friendly supporter sees me taking photos and tells me there is one shirt that doesn’t belong to a real club. It’s a Melchester Rovers shirt, the fictional football team from the comic Tiger.

There’s a photo on the wall of the Solihull Borough team back in 1999; Sticky’s favourite, Dunkirk manager Dave Harbottle, is posing in the line-up.

As we walk out the clubhouse a wedding party is arriving. Solihull Moors midfielder Darren Middleton is tying the knot today, but apparently it’s not him. 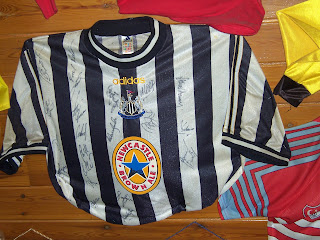 Blyth come out fired up and play a beautiful game of football for twenty minutes or so, but they lack the cutting edge and cannot get past the formidable Solihull centre halves Daley and Streete.

Against the run of play Solihull pour forward with some crisp passing, attacking the vulnerable Blyth left flank. Junior English’s cross is turned in by Gardner. It’s the difference between the two sides. Solihull create endless chances and really should win by a larger margin. Blyth have the wind took out their sails when conceding the second goal. Maybe they have partied too hard this week. 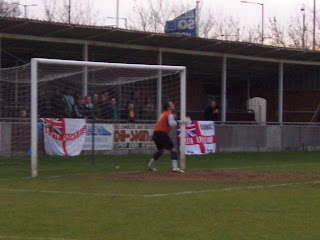 Solihull have further chances as Blyth throw caution to the wind, but substitute Leon Kelly lacks the composure and technique of his teammates.

The Blackburn scout will be rubbing his hands at this performance. Blyth now sit in the relegation zone and on this form, with only one point on their travels, it’s difficult to see where the next win will come from. As one of their supporters told us: “We’ve been shite all season.” “Except in the FA Cup mate”, I reply.

Man of the Match; Liam Daley
Posted by Sticky at 6:54 PM

No good games ? Goals guaranteed at next weeks local derby.

The shirt display in the club house there allways impresses me.

"a Stella for Sticky: yes I’m back on form."
So who was first to leave at your works christmas party?

"We observe a minute’s silence for the sister of the president, who died suddenly at the age of 85."
F**k me it's not sudden after the age of eighty, it's expected!

Merry Christmas to all your readers sticky... Both of them!

Hi JK - the only shirt display that sticky is impressed by is the one in tweedies shop window!

If you're in the area again, pop down the road to Sherwood Road, Hall Green to visit The Moorlands, former home of Moor Green which now a sad, overgrown derelict mess.