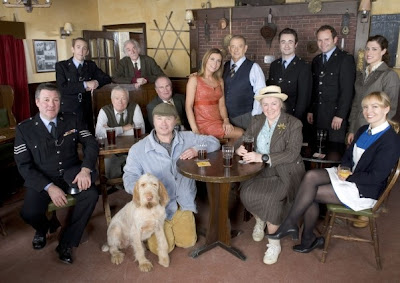 It’s Sunday evening. Mrs P and Sticky junior are chatting in the lounge, ‘The Skipper’ is on Call of Duty upstairs and Countryfile is on the TV. The Groundhopper peers over his Non League Paper as Matt Baker and Julia Bradbury have a mosy around the Pembrokeshire coast.

The clock tick tocks towards 8pm. I tense up. I’ve dreaded this moment all day. My stomach is in knots. I remove my H&M fleece. I start to fidget. I walk to the kitchen to uncork a bottle of wine. I dip into the snacks and savouries cupboard and grab some Phileas Fogg Sea Salt crisps.

I return to the lounge. Countryfile has come to a close, the credits begin to roll. The atmosphere is eyrie. I stare at the remote control. I so badly want to press ‘103.’ I turn down a block of Galaxy chocolate. 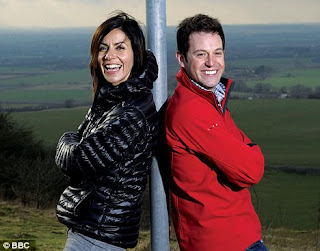 How could ITV do this? An eighteen year run brought to an abrupt and brutal end. The bloody Tories and their cutbacks. 40,000 cops being made redundant – fair enough – but why couldn’t they leave PC Alf Ventriss, Gina, ‘Daft David’ and the gang alone?

Who’s going to look after Alfred the dog now? Will he be sent to the RSPCA in Scarborough? What about poor old Ventriss. Who’s going to want to employ that lazy so and so? He’ll be making his final ever brew at Aidensfield Police Station, anytime now. Perhaps he’ll upgrade to a tin of Marks and Spencer’s gold-wrapped chocolate biscuits, to mark the special occasion.

The only chance of Alf getting a job will be if Pickering Town FC employ him in their Tea Hut on a Tuesday night and Saturday afternoon.

I haven’t the heart or bottle to watch the final episode. I’ll get the 18 year box set for Christmas. Me and Murphy, the budgie (Santa better bring him this year) can watch them together. There’s a Help for Heroes concert from Twickenham on BBC1. We watch that instead. Scouse comedian, John Bishop, is well funny. 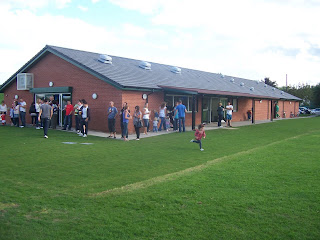 I’m full of cold and as miserable as sin. The weekend is manic. I spend Saturday morning in the grim surroundings of Grove Farm, by the River Trent, on Lenton Lane, watching Nottingham City Schools football trials. I jot a couple of names down in the notebook.

Saturday afternoon is spent down at my local football club, where former Nottingham Forest manager and local resident, Frank Clark, opens a new clubhouse and changing room facility, which has been in the pipeline for nearly 10 years now. The project has been a tiring drain on the club’s resources. The fundraising effort has been immense.

I played a small part six years ago when Ackers and I toured 106 football grounds in England and Wales over six days. I donated some money to the Club and the British Heart Foundation. We didn’t sleep for two nights – it nearly bloody killed me.

The Chairman of club (Rob Clegg) tells me he has bought 200 mugs for tea and coffee. Polystyrene can be consigned to the dustbin. Hopefully their smashing catering department can knock up a brew or two in a teapot. 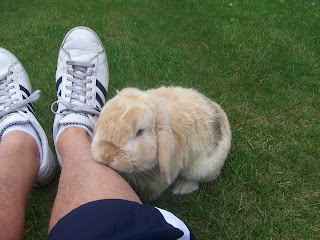 Saturday night is spent at ‘Chopper’ Harris’ 40th birthday party, in his well manicured back garden, in the dry village of Willoughby-on-the Wolds. It’s a chance to reacquaint with old and trusted friends.

It’s the day of the FA Cup replay between Gresley and Lincoln Moorlands. I’m sat at work despairing at the weather blowing into Lancashire Cricket Club’s Old Trafford ground. Notts can’t get on the field of play and look to have blown the Championship title.

Mrs P has had a torrid 48 hours. Firstly she came down with gastric flu and now she appears to have caught my Man Flu. I hope she soldiers on like I did. I never moaned once (yeah right).

I arrive home from work and flop on the sofa. Mrs P is doing a spot of ironing. Channel 4’s Come Dine With Me is followed by the amusing Coach Trip. I suddenly hear someone snoring, perhaps it’s Finley …. Oops, no it’s not, it’s me. I’ve had a Winston Churchill power nap and woke myself up. 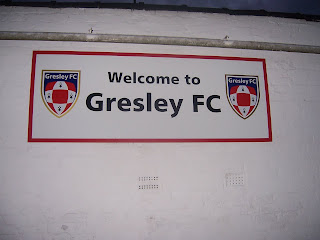 It’s chicken pie and mash followed by Sainsbury’s trifle for tea. I start getting ready for the arrival of The Taxman. The kids have got a Dance Anthems programme on Sky TV. Stretch and Vern’s ‘Boogie Wonderland’ re-mix booms around the room.

I flick on the cricket at Old Trafford. After two days of rainfall the game is brought to a close because of a spectacular sunset – ‘sun stopped play.’ We are doomed. Anybody but Yorkshire, please.

The Taxman arrives at 6.50pm. He’s hardly full of the joys of spring. He complains that he was short-changed by 91 pence at Morrisons, when he bought some ham off the bone which was on special offer. A similar thing happened to him in the Lounge of the Plough Inn at Normanton-on-the-Wolds last Tuesday evening, when the landlord forgot to give him 20 pence change.

We arrive in Church Gresley in 40 minutes and manage to park right outside the turnstile, in an already jam-packed car park. 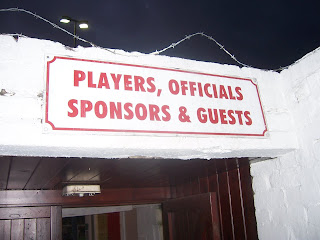 Church Gresley is in south Derbyshire and has a population of nearly 5000. It is close to the town of Swadlincote, where Stoke City Premiership footballer Carl Dickinson was born, as was former British Heavyweight Champion boxer, Jack Bodell.

Gresley Rovers were formed in 1882. The club has played at the Moat Ground since 1909. In 1991 they reached the FA Vase final where they drew 4-4 against Guiseley. They lost the replay at Bramall Lane.

Former managers include Paul Futcher and Sky Sports pundit Garry Birtles. Following financial difficulties the Club was liquidated in 2009. They were reformed and placed into the East Midlands Counties League.

We queue with the ‘Gresley Baby Squad.’ It’s £6 per man and £1 for a corker of a programme. The ground is a beauty, just as I remember it. It should be a national treasure and never taken away from these fair folk. 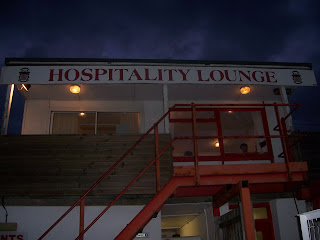 There are dozens of different vantage points. The Taxman has noticed a huge, filthy black cloud blowing its way in from the west. He takes a pew on a wooden seat on the opposite side to the main stand.

88 year old former Radio 2 DJ, Sir Jimmy Young, appears to have made a comeback in the Gresley PA suite. Every song seems to come from the Fifties. I’m sure I even hear The Big Bopper.

A small group of supporters have congregated behind the goal. One of the subs warming-up smashes a shot wide of the goal; a young chap feels the full force as the ball hits him straight in the mush. “No wonder you’re sub” a woman cries out.

Gresley FC came back from the brink in Saturday’s original tie. A man from The Times was at Lincoln Moorlands on Saturday to report for the national newspaper. 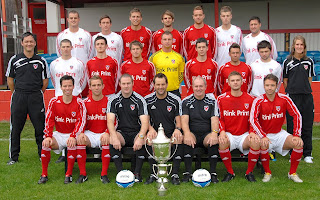 It’s a mediocre first half. Gresley kick down the slope but their game is as hurried as their opponents. Somewhat, bizarrely, they only play one striker up top. They haven’t the pace, strength or quality to get past a creaking Railway defence.

McCann and Good look lively for the visitors but neither side carve out any worthwhile chances. Gresley have a lion’s share of the possession.

We meander around the ground to the Social Club at the break. Nothing’s really changed since my last visit. Neither TV set is switched on, which is quite strange. ‘One in a Cup’ Typhoo tea is on offer at the Tea Bar. It’s 70p a go.

Jimmy Young gets back on track with Abba’s ‘Winner Takes It All.’ The Taxman taps his feet to Bad Manners’ ‘Lip Up Fatty.’ 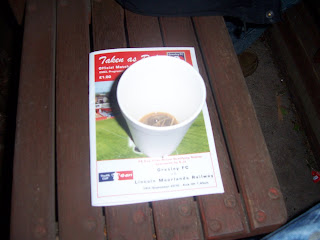 We walk back to our seat in an anti-clockwise direction. I chance upon a groundhopper I know from Sileby, near Leicester.

We’re both having a moan and a groan about the quality of the football, when Moorlands midfielder Scott Lowman sets his sights from 35 yards out and thumps a shot goalwards. Former Shepshed stopper Gary Hateley is in the nets, supporters at Dynamo used to claim he had mirrors on both goal posts so he could admire himself, while waiting for a corner, he watches the ball whistle past his barnet, into roof of the net.

The game comes alive. Gresley’s Mickey Lyons, a former England youth international, is the pick of the bunch, with his inch perfect passing and light movement. How on earth has he found his way so far down the Non-League Pyramid?

After intense Gresley pressure, the home side somehow find themselves 2-0 down with Tom Garrick seizing onto an undercooked back pass. 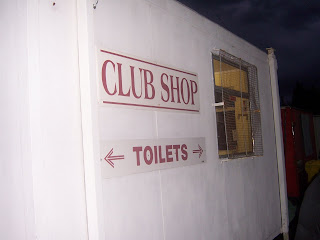 Immediately from kick off Lyons plays an outrageous back flick to Carl Slater who blasts a shot that hits the back stanchion to reduce arrears. Garrick misses a sitter. Gresley camp inside the Moorlands area. Cross after cross come into the box from the right and left. Efforts are cleared off the line or go just wide of the post.

It’s been an enthralling second half. Gresley can consider themselves a tad unlucky. But it’s Lincoln Moorlands who go through to the Second Qualifying Round.

There’s still time for Lincoln keeper’ Zaccardi to trade insults with the ‘Baby Squad’ as the game ends in chaos.

Man of the Match: Mickey Lyons

Attendance: 247 (On a school night with Man Utd on the box)

" The ground is a beauty, just as I remember it. It should be a national treasure and never taken away from these fair folk."


best laugh I've had all week

"Anybody but Yorkshire". Ooh that's a harsh thing to say about a young side of mainly homegrown talent, several of whom will undoubtedly go on to form the backbone of the England squad for years to come. Anyway, your beloved Notts squeezed home in the end...but next year will be the start of another Yorkshire Dynasty...I hope!

'Anybody but Yorkshire' it's tongue-in-cheek mate. My colleague at work is a Tyke.

We've some good uns coming through, but we will have to wait for a few years.

Until then, it will have to be chequebook county I'm afraid.

The Yorkie chequebook may also now be coming out given the departure of Jacques!

Anyway, keep up the good work (loved the Phil Collins comment on the latest post - I said something similar to my better half, so poor was his performance). May we see you out this way (the "Back of Beyond") before too long? We have tea in mugs (but alas no pot) and fine real ales...and not a bad team to watch either.