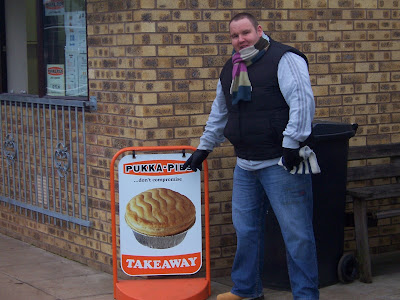 There’s been another robbery in our village; it even made the national news. In the early hours of the morning thieves armed themselves with a forklift truck and smashed their way into our local post office. They stole the cashpoint machine, threw into the back of a 4x4 and sped away. PC Plod had to tear themselves away from their Play Station 3s and cups of tea, but burglar Bill was long gone by the time they turned up at the scene of the crime. Keyworth Police Station is a stone’s throw away from the post office, but it is rarely manned. We’re thinking of selling up and moving somewhere with a lower crime rate, like Liverpool or the Bronx. 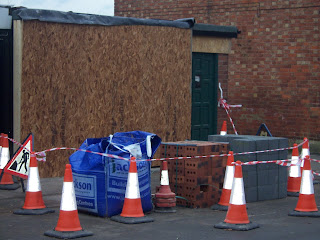 It’s been a shocking week for yours truly. I weighed in at over thirteen and a half stone on the scales last Monday morning and immediately went on a detox diet. To put it into perspective, you can’t be called Sticky and weigh that much. I went seven days without beer, wine, Bombay Sapphire, cheese, chocolate, crisps, meat and bread. And I tell you what readers, It aint half made me miserable.

I’ve been force feeding myself with porridge and water, lemon and water, celery, peppers, fish, jacket potatoes and bloody pumpkin seeds. I’ve power walked my way around Rushcliffe Country Park at lunchtime, in freezing temperatures, and shed a few pounds, but has it really been all worth it? 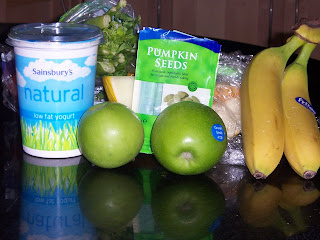 Due to the big freeze there was no midweek game to go to last week. I’ve had to suffer Waterloo Road and Relocation Relocation with the irritating Phil and Kirsty, in the front room with Mrs P. That bloody woman could fall out with her own shadow (Kirsty, not Mrs P). I can’t wait until her maternity leave starts and someone fit like Sarah Beeney takes over.

It’s Saturday morning and I’m meant to be out scouting. It’s been another cold night and plenty of games are falling by the wayside. I’m pruning the Christmas tree, in sub zero temperatures, in the garden, so I can fit it into the boot of the car. 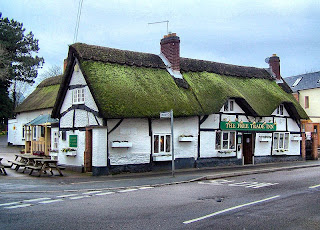 I drive down to the Rushcliffe Recycling Centre, hoping there might be some junior football on at nearby West Park, but the football fields are deserted. Sticky junior is in the passenger seat. He’s been grounded all week by Mrs P for a classroom misdemeanour, which came back to haunt him through his homework diary. I’ve had a bit of a private chuckle about it as it was during a music lesson. But Mrs P is furious, and has withdrawn all privileges.

I was meant to be watching ‘The Skipper’ this afternoon but news filters through that his match has been frozen off. White Van Man was already in a state of high alert. He tasks me to find a game. 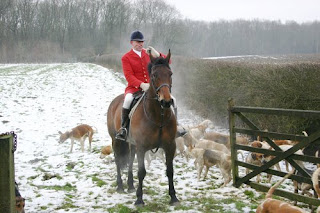 There seems to be a plethora of games that are still on close to Loughborough. I phone the secretary of Quorn to be told that the game against Kidsgrove has got the green light.

I devour my Tuna in red onion and celery and wash it down with a hot water and lemon. Yum yum.

I watch Aston Villa central defender Curtis Davies score against his old club West Bromwich Albion on Sky. He refuses to celebrate his goal. I like Davies, he is an honest individual. He once described himself, after a bad day at the office, as a ‘pub player.’ 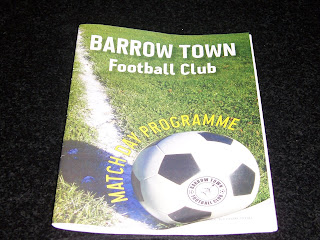 Mr Tuckwell phoned last night; he plays football for our local village. His game is off today and he’s keen to make his groundhopping debut. He’s a teacher at the local primary school and a bit of a dish. There’s always a cracking turnout of mums at the school gates when he’s on playground duty. Mrs P will be disappointed that he’s popped round whilst she’s down at the retail park.

The Nuclear Scientist is back from his vacation in the Austrian Alps. He’s only a little lad and managed to get into the kids ski school. He also got top marks for his après activities. 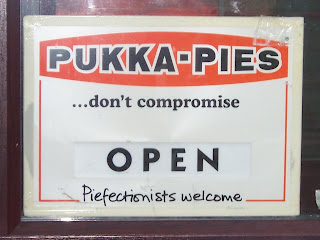 WVM picks the three of us up at 2pm. He has a slight tan from his week away in the Pyramids. I asked him to get me a picture of him with a fez on but I don’t think he moved his fat butt off the sunbed for the entire week, apart from propping up the hotel bar.

We’re in Quorn by 2.20pm but get turned away at the gate. Apparently the match official was a bit finicky and called the game off half an hour ago. 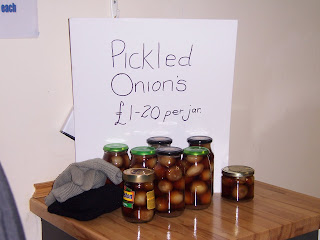 We’re back in Barrow in a few minutes and pull up at an active Riverside Park. It’s a re-visit for NS and I as we saw Racing Warwick play here in a friendly eighteen months ago.

Barrow upon Soar is in north Leicestershire, in the Soar Valley. It has a population of around 5000.

One of my all-time favourite pubs, The Navigation, is in the village. It sells an array of real ales, which you can sit and sup in the back garden whilst watching the narrow boats chugging up and down the canal. 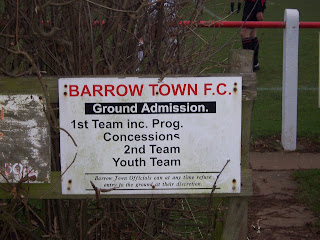 Today’s visitors are Heanor Town who are from the Amber Valley region of Derbyshire. The town has a population of 23,000. A couple of professional footballers to have played for the club include Leicester City manager Nigel Pearson and newly installed D***y County manager Nigel Clough.

It’s £4 admission which includes a very well produced programme. There’s no PA system or team sheet so I will be blagging it about the players on this BLOG.

I spot a groundhopping mate in the ground and we exchange tales of visits to different grounds, I shout the teas up; it’s my first one for a week. It comes out the pot, and the measures are generous, but too much milk means it only gets a seven out of ten. 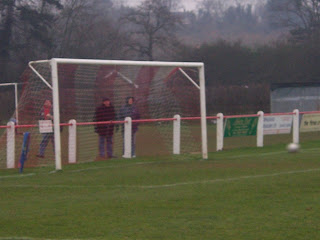 The temperature is plummeting so we all wimp out and go and hide in the impressive clubhouse. We don’t venture out until the referee leads the teams out.

The pitch is firm but perfectly playable. It has escaped the frost due to the area being in the lowlands.

Barrow Town play in an AC Milan strip, with Heanor Town sporting a ‘Dirty Dirty Leeds’ outfit. The home side hold a ten point advantage over their opponents. 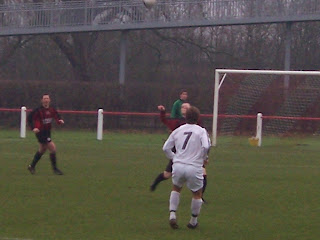 Both defences look decidedly dodgy in the opening moments, particularly the visitors. I remark to WVM that there’s more chance of him missing out on a half-time burger than this game finishing 0-0.

Heanor captain Rob Mawer is marauding down the left wing. He has good balance and an excellent left foot. He puts his side in front on 18 minutes stabbing the ball home following a cross from the left.

Barrow are a shade unfortunate to be behind as they have played the better football, but their 9 jacket, despite his excellent technique, is unwilling to pull the trigger and often dribbles up his own backside. 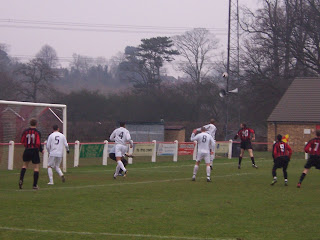 Heanor storm forward, Anthony Bedward pounces on a through ball, drives into the box and thumps the ball into the roof of the net. It’s half-time and Barrow will wonder how they are behind.

The Three Musketeers queue for tea and burgers; unfortunately neither are on the detox sheet. I check the scores out in the bar. Forest are two to the good and Lincoln are 2-1 down. A guy at the bar asks a good quiz question: Name three clubs in England or Scotland who have two u’s in their name, but they don’t have United in their title? 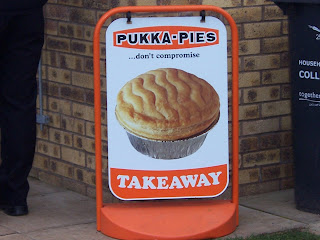 I’ve not felt this cold since Holbrook Miners’ Welfare. I can’t feel any of my toes. But there are no complaints about the entertainment being served up in this East Midlands Counties League game.

The second half is disappointing and disjointed. The game becomes a scrappy and drab affair. The referee blows his whistle in long annoying bursts. The players begin to niggle one another. Ten jacket for Heanor walks the tightrope.

The Barrow right back exchange passes with his colleague and makes a dash down the wing, his cross is inch perfect and is met superbly by Stuart Wilson to stroke home his second of the afternoon.

It’s a fair result, although Barrow Town are more pleasing on the eye. We’re back home for 5.15pm where another fish salad awaits me.

Man of the Match: Stuart Wilson

Quiz Answer: Bournemouth, Stenhousemuir and Queen of the South
Posted by Sticky at 1:20 PM

Went here in 2004, but got lost. We were 3 miles out of the way before we realised that we had missed a turn to the ground. Decent Programme when I went as well.