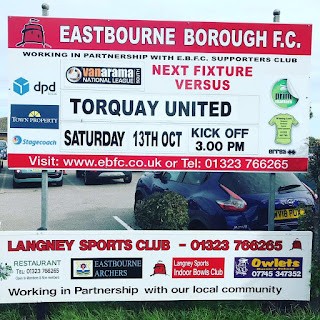 Ms Moon mentioned a month or so ago that her brother's 40th birthday celebrations would be taking place in Burgess Hill, Sussex, in mid-October. I couldn't crank up the computer quick enough to peruse the fixtures and towns in the county on google maps. The fixture list threw up an interesting Conference South game between Eastbourne Borough and a beleaguered Torquay United.

Monday evening is spent in the northern city of Carlisle following a windswept journey up to Scotch Corner and onto the exposed A66. My boss and I have a meeting in the morning with a rail company in the area. We jump into a taxi outside the 'Purple Palace' and head into the city centre. We have a quick jar in the Kings Head on Fisher Street before legging it up to The Thin White Duke - named after a David Bowie persona in 1975 and 1976. It's a converted monastery building which is now a fashionable bar. My ears prick up when I hear a familiar tune coming out on the Spotify playlist. It's 'How Much Are They?' by Jah Wobble (ex-Public Image bassist) from 1981, a record I bought as a kid on 12" from Selectadisc on Nottingham's Market Street. The barman says it was a hit on the New York club scene.

I'm fagged out on my return to HQ, the following day and decline an invite to Owen Street to watch Coalville Town v St Neots Town in an FA Cup replay. The game is an epic with the visitors clawing back two goals at the death to make it 3-3. They eventually win on penalties - I can't 'arf miss 'em. 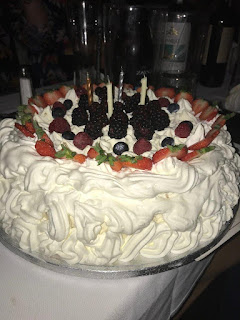 Wednesday evening is spent on the training ground, introducing myself to the Keyworth United Development team, who I'll be managing in the New Year. The lads enjoy a great session that leaves me bursting with pride on the short journey home.

I pick up Ms Moon's mum, Val, at just gone twelve bells on Friday lunchtime, as a convoy of cars head 'down 'Sarf.' Sat Nav is predicting a three and a half hour journey. We're sailing along the M1 with not a worry in the world, and only two miles away from the M25. I'm dreaming of slumping on my 'Purple Palace' double bed for a lovely cat nap when suddenly the traffic comes to a grinding halt during Terry's weekly allotment update from Merthyr Tydfil on the Jeremy Vine Show. We don't move for two hours as a seriously injured lorry driver is air-lifted to hospital by a helicopter.

We've pretty much polished off the mint imperials and Murray Mints by the time we get going again. The torture continues with the Steve Wright Show on Radio 2 - I didn't think Val would appreciate Hawksbee and Jacobs on TalkSport. I wince and shake my head in disbelief and embarrassment at 'Silly Boy' and his Serious Jockin' - and no, I'm not saying it. 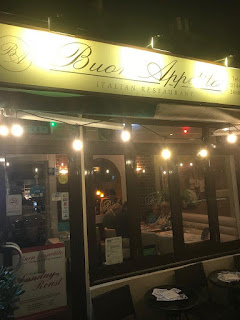 The Beefeater bar at the Burgess Hill Premier Inn is in disarray. They've no Guinness on and only Gordon's gin. Big Tony shouts me up a Doom Bar - it tastes like dirty washing up water (sorry Tony). The meal is top notch at Buon Appetito. I'm on Amaretto, Aperol Spritz and an expensive Merlot - as you probably realised there was no real ale on.

I feel sick on Saturday morning. Scoffing that birthday cake on top of everything wasn't a good idea. The service at the breakfast bar is nothing short of a shambles. Waiting staff play with their hair, giggle at hushed conversations and saunter around. I twice have to chase up coffee and breakfast  - Ms Moon can be a madam without her early caffeine fix. 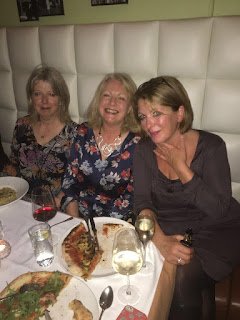 The sleepy village of Rottingdean is our first port of call. The purpose of our visit is to pay our last respects to Thin Lizzy, Belfast-born guitarist, Gary Moore, who died in Estepona, southern Spain, a resort we stayed at a few weeks ago. Moore is buried in the churchyard at St Margaret's.

Our timing isn't great, it looks like a funeral is about to take place, as we snoop about the graveyard, before Ms Moon frantically waves at me from the far corner. I'm quite cross, as I like to find the celebrity headstone first as a rule (we have done this a few times - gravehoppers). Ms Moon clocks Kipling Gardens. I mention that they sell exceedingly good cakes there - it falls on deaf ears. Jungle Book author Rudyard Kipling lived in the village for several years. 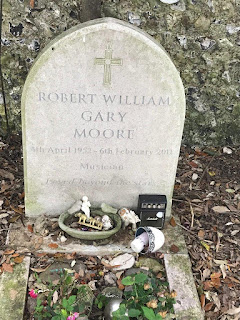 We by-pass the channel ferry port of Newhaven, where the abandoned car of Lord Lucan was found in 1974 on a residential street following the murder of the nanny of his children, who was bludgeoned to death with a piece of lead piping in Belgravia, London.

We arrive on the seafront at Eastbourne with plenty of time for a mooch around. The pier is a beauty, despite being seriously ravaged by fire in 2014. It was bought by a local hotelier a year later for a reported £5 million. Ms Moon and I part company for a while (Caffe Nero). I peg it up through town before turning onto Lushington Road. There's a blue plaque on a property at No.7 (now a dental surgery) where Alice in Wonderland author Lewis Carroll used to holiday in the late 19th Century. I manage a quick pint of lukewarm London Pride ale at The Marine, a cosy residential pub tucked away on a back street off the front. 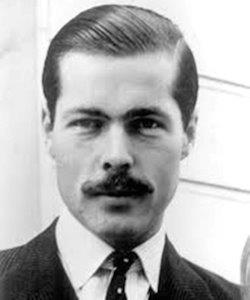 As we stroll back to the car, two yellow Coastguard vans with flashing beacons accompanied by a police car are speeding up to Beachy Head, where we later hear a glider has crashed-landed into the sea, with no injuries reported.

Eastbourne Borough's ground is a short three-mile ride out of town. Eastbourne is a seaside town and resort in East Sussex with a population of 100,000. It's east of Beachy Head where I'll be visiting later today if 'The Lincoln' come away from Port Vale empty-handed. The MP for Eastbourne is the Liberal Democrat, Stephen Lloyd, who holds a 1,609 majority - the party only have twelve seats. Eastbourne Pier was built between 1866 and 1872 at the junction of the Grand and Marine Parades. 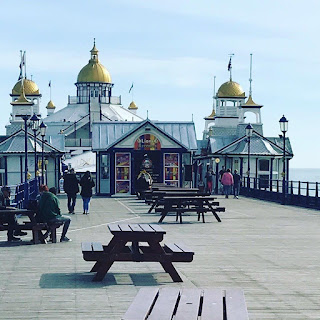 German philosopher Friedrich Engels' ashes were scattered from Beachy Head at his request and the author of The Graduate, Charles Webb, is housed in a far-from luxurious hotel, in the town, by social services. Current (not for long) British Prime Minister, Theresa May, was born in the town along with BBC weatherman Michael Fish, as were footballers Joel Lynch and Solly March (a bargain buy from Non-League, Lewes) and cricketer Ed Giddins. Legendary Radio 2 presenter Charlie Chester resided in the town -one for the kids there. Eastbourne Borough FC were formed in 1964 and play at Priory Lane. Notable former players include: Ashley Barnes, Carl Jenkinson and Lyle Taylor.

It's £13 on the turnstile and £2.50 for a programme. It's Non-League Day today, but I'm not aware of any discounts. Ms Moon notices that I have a face like thunder and that I'm pointing at the playing surface. It's 3G - Sticky doesn't do 3G. Oh well, it's a decent tick off. We stand on the opposite side to the dugouts, nearer to the goal the Gulls will be attacking. Their large following are housed behind the far goal. The DJ is in fine fettle. He plays Modjo, David Guetta and Babyshambles - no relation to Omnishambles at the Beefeater 'restaurant.' 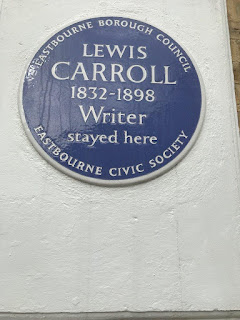 The first half is nowt to write home about. Torquay are toothless in attack. Eastbourne work the 'keeper and thoroughly deserve to take the lead shortly before half-time through Alfie Rutherford. Torquay United manager Gary Johnson will be blow-torching the paint off the dressing room walls after witnessing that lacklustre display; they are sent out early onto the pitch. 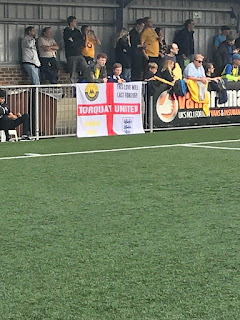 I fancy Torquay will win this one. We decide to move up to where their following are gathered. Ms Moon has heard a couple of racist remarks made by a moron next to her (Eastbourne fan). Had I heard them I would have sparked the bloke flat out. It's for the best we stand elsewhere.

A Jake Andrews wonder strike from 25 yards with a wand of a left foot restores parity for the visitors and has the Torquay supporters mobbing Ms Moon. Minutes later a tap-in from Jamie Reid puts the Gulls 2-1 to the good. They are pegged back to 2-2 when their fragile defence leak another goal, scored by the excellent Dean Cox. A stonewall penalty is dispatched by Jamie Reid, who completes a hat-trick in the dying embers to give Torquay a flattering victory.