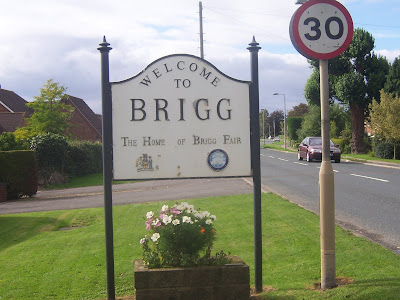 It’s Thursday 16th September, the day before Mrs P’s 41st birthday. Sticky Palms is in a right old flap. The presents are sorted, the flowers ordered and the table booked, but there are more pressing matters.

Nottinghamshire County Cricket Club have been holed up at a rain-sodden Old Trafford for three days now, with barely a ball bowled. The County Championship is slipping from our grasp. Somerset and Yorkshire emerge from the chasing pack.

It’s the final day. Yorkshire’s batting, for the only time this season, has capitulated. By lunch they are out of the running. Somerset seem certain of a win at Durham’s Emirates Ground. 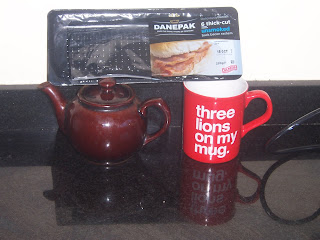 Sticky Palms is at work, pacing up and down the stairs between the Warehouse and the Technical Department. The Cricinfo live desktop scoreboard sits in the right hand corner on my taskbar. I daren’t even take a peek.

We eke out 400. Three wickets are required in 16 overs. I’m driving home from work. BBC Radio Nottingham shoot over to Dave Bracegirdle, who’s commentating from Manchester. Kolpak signing, Andre Adams, has taken two wickets in three balls. We are the champions. A tear trickles down my cheek. 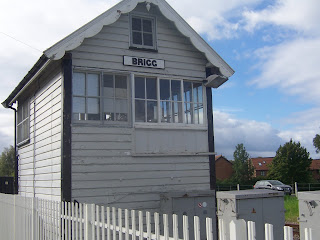 We’ve not clapped eyes on one another or spoken to each other since sharing a beer in the marquee at the Keyworth Show. I glance at my phone, on my desk at work; the display is lit up with the words ‘Trumpy Calling.’

The legend has stopped off for a beer in Penrith in the Lake District. He’s been up since 2am and has already piloted to Stirling, in Scotland, to drop a car off. His pint of cider is empty before the barman completes the credit card transaction. It’s his warm-up act for Saturday’s main event at Brigg.

We (the family) spend Friday night down in the delightful surroundings of Plumtree Cricket Club. They were my fierce rivals when I played, but my two boys are settled down here. It’s just the one Black Sheep for Sticky Palms. I turn in for an early night. 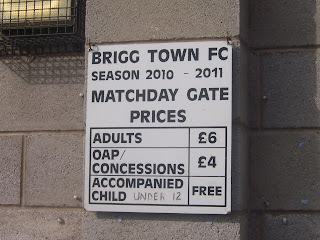 It’s Saturday morning. I’m crouched down in Finley’s crib (pet rabbit) dishing out a 7 day ban for garden hopping. The furry fellow takes it badly. I console him with some treats that he gently takes from the palm of my hand.

I shoot off down to Highfields University Playing Fields to watch Nottingham Schools City Boys trials. I spot my man; find out where he’s playing tomorrow and head back home to pick Trumpy up.

I’m tooting my horn, but there’s no sign of the legend. I walk up his drive to find him having problems locking his door. At the fifth attempt he finds the keyhole. The Old Speckled Hen and McEwan’s have already kicked in. 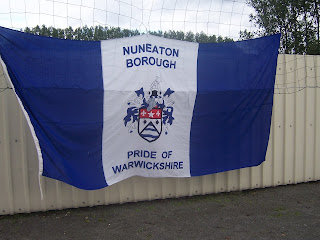 He plonks his litre of pear cider in the footwell. He’s decked out in his checked shirt and Cotton Traders tracky bottoms. The 1970s mullet looks in fine fettle.

White Van Man is posing on his front garden. He has a flask full of vodka that he’ll drink at the Forest v Swansea game. He brags that it’s been six weeks since alcohol last passed his lips. Trumpy jokes it’s been six minutes since his last alcoholic beverage.

We drive down the Fosse way towards Lincoln, onto the by-pass and take a left turn onto the A15 signposted to Brigg. 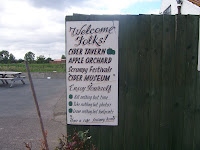 There’s no need to turn the radio on as Trumpy retells a summer’s worth of anecdotes. He spent a week in the Scottish Highlands chalking a few pubs off. He went in one watering hole when England were playing Bulgaria in a European Championship qualifier. When the fourth goal went in Trumpy started singing ‘Four Lions on my Shirt.’ The locals were unimpressed.

He’s spent the last few weekends away on drinking sprees in Market Harborough, Cromer, Boroughbridge and Manchester. He talks excitedly about the world renowned Trent Bridge Inn being bought out by Wetherspoons. Trumpy is reluctant to discuss Leicester City’s 6-1 pummelling at Portsmouth last night. 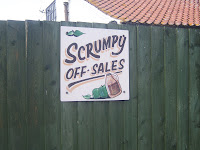 For those new to this blog, Trumpy’s mission in life is to visit every village/town/city in England and to make a financial transaction by credit card or cheque. He’s been doing this extraordinary hobby for over 30 years now.

We pop into the Royal Oak in Snitterby. The landlord, who looks like Catweazle, won’t take credit card or cheque. Trumpy is unmoved. We press on to the Brandy Wharf Cider Centre. It’s a dream come true for the legend. We both select a pint of Kingston Press Cider 4.5ABV.

The landlady and T Bolton wax lyrical about the umpteen ciders they’ve sampled in their lifetime. There are sixteen different ciders on offer here. Sticky P bags a litre bottle for £3.99. Lincs FM 102.2 are playing American rock band Kings of Leon. They are an all-brother band. 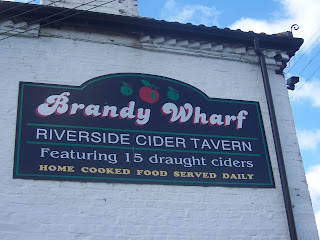 Notts County Head of Youth, Mick Leonard rings me up to let me know that the Pies u18s have smashed my old team Lincoln City 4-1. Defeat today for the first team against Stevenage would surely single the end of the road for comedy duo Chris Sutton and Ian Pearce.

We dine at the Queens Head in North Kelsey. There’s only room in the Snug. T Bolton washes down his cheese burger with another pint of cider. We make a hasty exit when the CD player randomly chooses the cheesy ‘Another Day in Paradise’ by Phil Collins.

We’re in Brigg for 2.30pm. We’ve compared diaries and penned a few dates for games in the future. Trumpy fancies Ossett, Redditch, Louth, Hyde and Histon. 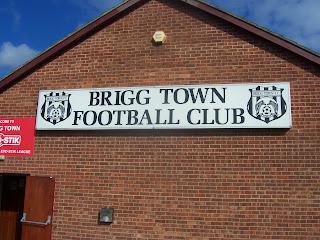 I park the Rolls Royce on a side street. We wander up a snicket and through a side gate. There is a queue at the turnstile of 40 people or more. They’ve turned up in force from Warwickshire. It’s £6 on the gate. The programme is £1.50 and is great value.

Brigg is a small market town in North Lincolnshire. It has a population of just over 5000. The town is the home of the Falcon Cycles factory. The actress Dame Joan Plowright, the widow of Sir Laurence Olivier, was born in the town in 1929. 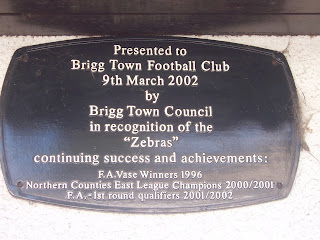 There’s no hesitation from Bolton he’s straight into the bar for a pint of bitter. Sticky Palms meanders around the ground.

I’m sat in the stand looking out on this impressive stadia. The Brigg dugout is to my left. Their assistant manager is already winding me up with his unnecessary quibbling of every decision. He childishly enquires where the referee is from.

I see that Trumpy has blended in with the visiting supporters and is shielded from the blustery conditions. I walk across to meet him. It’s a poor first half with little indication of what’s to come. 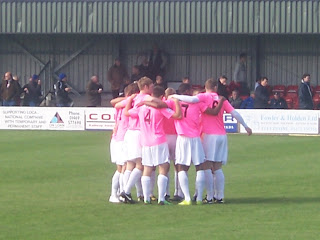 The Nuneaton fans are cocksure of victory. Their team play keep ball with little indication of urgency. Brigg, to their credit, play a passing game, with one player up top. There are a few half chances but the strong gale spoils the game.

Former Coventry City winger Donovan Simmonds has a change of pace, his cross is headed against the bar by Lee Moore.

On 40 minutes Nuneaton take the lead. The lively Moore seizes on a mistake and thunders home a shot. 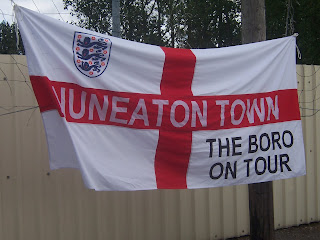 Trumpy doesn’t hang around for the one minute added time indicated by the excellent official Mr R W Martin; he joins the queue at the bar for a couple of more sherbets.

I glance up at the TV set; the Imps are losing to Stevenage 1-0. I spot a signed, framed Tranmere Rovers white shirt on the wall. It has a ticket and programme inside it from an FA Cup clash with Brigg in 2001.

I stand close to the goal Nuneaton attack expecting them to rack em up. Brigg immediately equalise. A smart move down the right results in Chappell converting a cross. 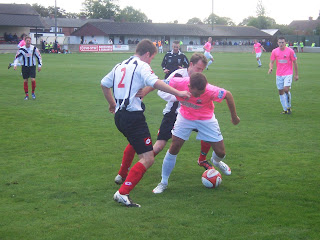 Trumpy comes staggering out the bar; it’s another goal he’s missed. He’s just in time to see Nuneaton gain the lead with a header from Stuart Pierpoint.

Brigg restore parity on 74 minutes following a spell of pressure. Danny Buttle’s left wing cross is met at the far post by Tommy Spall. Moments later the Nuneaton full back treads on the ball and falls in a heap, substitute Ryan Paczkowski buries his shot into the corner of the net.

The Nuneaton fans are gobsmacked. Their team have controlled the game and yet have fallen behind. A two year old Nuneaton fan is sobbing his heart out in his pushchair. He’s not bothered that his team are losing – he’s dropped his lollipop. 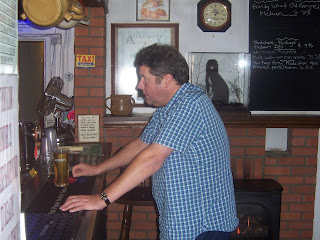 Substitute Chris Dillon bails them out of a tricky predicament, when he plants a firm header into the roof of the net from a left wing cross.

The game’s set up for a gripping finale. It’s like water off a duck’s back for Trumpy. He’s back in the bar to complete his hat-trick.

Man of the Match: Referee, Mr R W Martin (didn’t even notice him)
Posted by Sticky at 10:58 PM