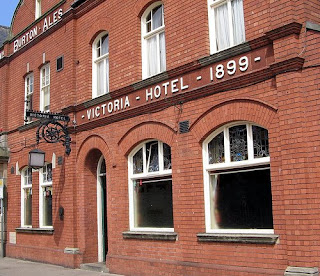 Boy am I frustrated with Sticky junior at the moment. He’s thirteen, going on fourteen, that dangerous age. We’re not hitting it off right now and he’s doing my duck in. It’s like walking on eggshells. Mrs P has a calmer manner in dealing with his wrongdoings. I’m a little more proactive.

I am awake on Saturday morning at the crack of dawn; it’s probably best that I’m on my own today. I’ve arranged to meet my boss at The Pies, Mick, at The Hemlock Stone in Wollaton Vale, to the west of Nottingham.

I make myself a brew. It’s poured from my china pot for one, and will be the best drink of the day; I’d give it a nine out of ten; I know I’m modest. 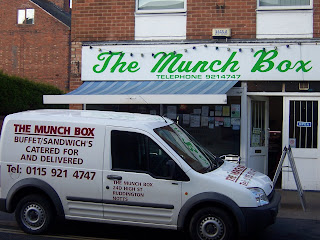 It’s 8.30am. I jump in the car and drive down to Ruddington. I park outside Murray’s Bar (the Bricklayers Arms). NSL players will have been propping the bar up last night, chewing over today’s fixtures.

I saunter across the road into The Munch Box and order a breakfast cob; it will probably be the last thing I devour before my meal tonight.

I’ve got a thick head. Too many Kronenberg 1664’s went down the hatch last night. The breakfast cob soaks up some of it. I go to the cashpoint machine; I’m going to need some money for my liquid lunch at the Victoria Hotel in Beeston. It’s in my top ten pubs in the county. 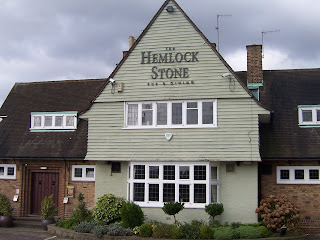 A paperboy whizzes by; he’s got a Notts County beanie hat on. They’re playing my team today, Lincoln City. It’s the first time in forty years that I’ll go a whole season without watching them play live.

I’m listening to the Five Live Breakfast Show. The traffic news is that there’s been accident on the Nottingham Knight Roundabout. I arrive there thirty seconds later to see a car upside down on the island, being winched up onto a lorry.

I drive up University Boulevard and onto Wollaton Vale. The road is dug up close to The Hemlock Stone, due to gasworks. 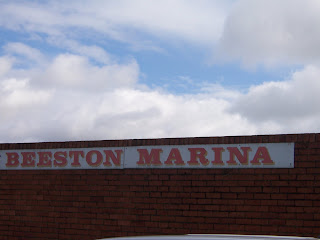 Mick arrives at bang on 9.30am, and we travel north up the M1, close to Mansfield. I have to keep locations a secret as The Sheep and Tricky Tree scouts come on here to see where I’ve been.

Mick has played over 200 games for Notts County and spent a further five years up at Saltergate. He’s recently come back from Dubai and Hong Kong, following playing and coaching stints.

We watch a low key junior game, but our intended targets perform very well. We arrange to get them in for training. I’m keen for lunch at ‘The Vic’ in Beeston but Mick has another game lined up on our way back home. 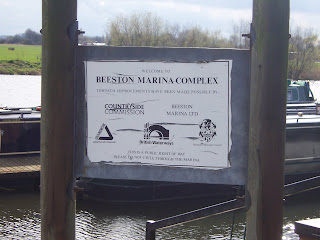 It’s tipping down with rain and begins to hail stone. The wind is whipping up into a frenzy. Typically the game goes to extra time. We do the business and head back to Wollaton to pick my car up.

It’s too late for lunch. I’ve looked forward to visiting the The Victoria for a real ale or two all week. I’m starving hungry. Mick bought me a manky sausage roll at the last game, but I’m White Van Man trained, and ate it in one bite.

I drive into Beeston and take a left hand turn south of the town centre. I drive over a hump-backed bridge. The Tom Tom is back home and I’m unsure where the ground is located. 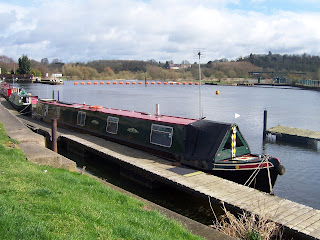 I pull up outside the Jolly Angler and phone a mate from work, who guides me into Trent Vale Road.

Beeston is a town situated three miles to the south west of Nottingham city centre. It has a population of over 20,000 people. Famous folk either born in the town, or have lived there include: the bare- knuckled boxer William ‘Bendigo’ Thompson, fashion designer Sir Paul Smith, Soul singer Edwin Starr and Rising Damp actor Richard Beckinsdale.

The pharmaceutical and retail chemist group Boots has its headquarters on a campus 1 km south east of Beeston. Mrs P spends about £30 a week on cosmetics from the company. Sticky Palms always buys his Gillette Sensor blades from one of their outlets. 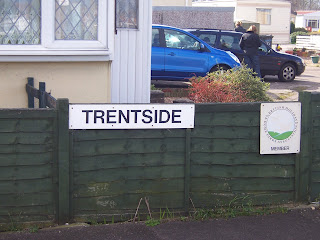 I park the car behind a fence, close to the goal Boots Athletic are kicking in against. Their shooting is wayward and skew wiff. I wisely reverse Sally Gunnell out (not much to look at but a bloody good runner) and park up the road, close to Beeston Marina.

I take a nosey around the marina. It’s a hive of activity. There’s a shop open selling tea and ice creams. Optimistically, tables and chairs are laid out for customers to sit down and admire the vista. It’s bloody freezing. I’ve got five layers of clothes on, my Thinsulate thermal gloves and my Next beanie hat.

I walk through the gate at the ground and straight towards a building that is in a state of disrepair. There are cracks to the windows and the wooden frames are rotting. Deb serves me tea with a smile, but minus a teapot; it only gets a six (maximum mark when not poured from the pot) 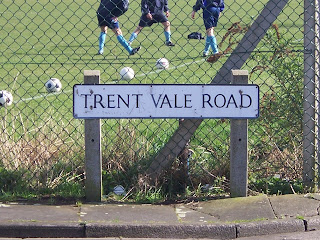 The pitches look a little rutted and worn. A guy sits alone shielded by some leylandii. We strike up a conversation. I thought he was a sad old ‘hopper’ like me, but it turns out he’s a referees’ assessor. I politely ask if he’s covering my game. Thankfully he’s not, but he does add that our ref, Colin White, is the best in the league.

The Boots boys are trekking their way back to the changing rooms. I manage a quick word with Alex ‘Penguin’ Bowles. We used to work together. He’s playing centre back today alongside ‘The Chief.’

Boots Athletic were formed in 1894. They used to play in the delightful surroundings of Lady Bay. I saw one hell of a Notts Senior Cup game there, a few years ago, when they beat Central Midlands team Clipstone Colliery in a seven goal thriller. The pavilion at Lady Bay was second to none. 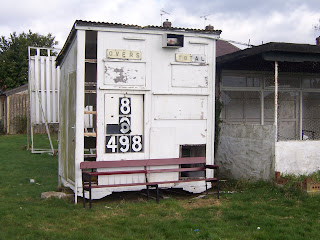 I take my tea cup back to the tea room, but I’m prevented from entering as the referee and players are exiting the changing rooms.

I stand opposite the dugouts and cowshed stand. The gale blows behind me and across the pitch,

Colin White is indeed the referee; he was on top form a few weeks ago when I saw him whistle at Caribbean Cavaliers.

Kimberley are Boots’ bogey team; they rarely give ‘The Chemists’ a sniff. Nobody wants to win the NSL. The pressure is getting to a few. Boots are my dark horses. I saw them play a beautiful game on Swifty’s snooker table surface at Pelican. 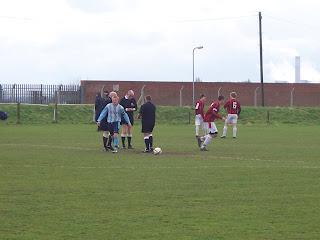 The game is open and Kimberley are impressive. They win plenty of corners, which hold up in the wind and causes anxiety in the Boots defence.

Boots’ ‘keeper Dean Bonser is playing today despite the sad news that his mother passed away earlier in the week. What a brave man this guy must be, to still want to turn out with his mates, with the tragic events preying so heavily on his mind. He doesn’t want to let the side down and should be applauded for his bravery and courage.

Drama unfolds on the pitch behind us with news of an injury to 49 year old Reserve striker Paul ‘Wily’ Williams. It turns out to be the 29th broken bone in a long and illustrious career. 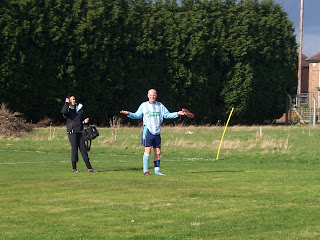 Despite the swirling wind, both teams try their upmost to keep it on the carpet and counter-attack with pace. Scott ‘Tripod’ Peach blasts the ball wide from a good position, without realising that he has more time on his hands.

Kimberley take the lead with Tony Hapgood smashing home a rebound from close in. Shortly after Boots scramble a shot off the line as Kimberley finish the half the stronger and more confident of the two teams.

I’ve spent the entire first half in the company of Boots secretary Big D, the vice chairman – who’s a little cockney geezer - and Boots legend Gareth Rees (Bradley Walsh lookalike). Rees, despite an impending knee operation, scurries after any stray ball that comes his way, off either pitch. He has just turned 40 years of age, has played over 500 games for The Chemists, but still retains an enormous enthusiasm and appetite for the game. 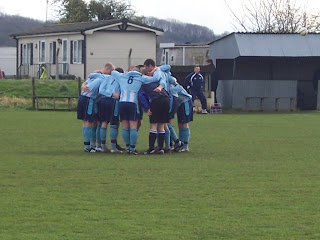 I bump into Kimberley MW secretary Steve Hobster at the break. He’s blowing a fuse as his missus has booked a Mexican in town for 5pm. He says he’s going to bolt his chicken fajitas and flee up to The Approach to watch the England game.

‘Tripod’ doesn’t show for the second half. Big D enquires with a member of the management team whether Peach is injured. “No he’s just s**t”, replies Miles.

Boots play with more purpose in the second forty five. Sticky’s favourite, Rich Saunders provides them width and balance. The fleet footed Greg ‘Kevin the Teenager’ Whatnall’ orchestrates things in the middle of the park. But he hasn’t the energy of his team mates Scot Boulter and Wayne Jones. 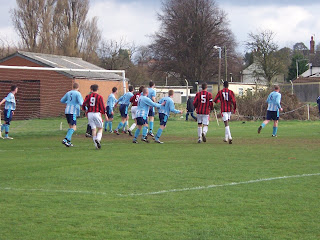 Kimberley are no mugs and are quite happy to let Boots play in two thirds of the pitch. There centre- halves are man mountains. One is the spitting image of Jesus Christ. They shut up shop and close ranks in the final third.

There’s pandemonium on the pitch behind us as Jon Jon Walton has put the Chemists’ Reserves one to the good, with 15 minutes to go.

Boots pepper the goal, but it’s mostly from distance. They have a final throw of the dice when Saunders escapes his marker, swings in a peach of a cross for Gareth Rees to agonisingly fail to get the slightest of touches to steer the ball into the net. 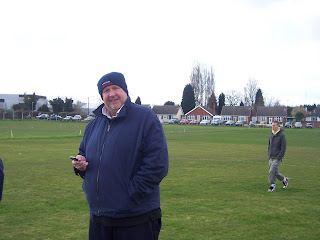 The brilliant referee Colin White ends proceedings, with his his final blow of the whistle. The players have made it easy for him to adjudicate today.

Fair play to Kimberley for their hard earned win. As for Boots, well, what a smashing club. It’s got that family feel about it, that I’ve not noticed in the NSL before.

Man of the Match: Either Kimberley centre back.
Posted by Sticky at 6:00 PM

What happened to Boots at Lady Bay? Do they not have their own Sports Ground any more?

Kronenberg 1664 is Satan's urine.
Don't pay Next prices for a beanie Sticky there is a reputable store in Keyworth that sells them cheaper.

Sticky juior has my full sympathy. I imagine you to perform just like Victorian Dad out of that sacred publication Viz.