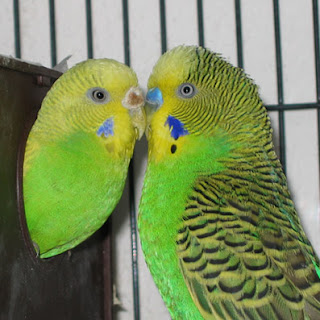 I want a new addition to the family. I casually mentioned it before Xmas; even wrote it on my Christmas list letter to Santa. You’d be looking at getting change out of £50, including all the accessories: the cage, the mirror, the swing and the toys.

The little fella would only cost a measly fiver. He has to be coloured green and canary yellow. He would of course support Greenwood Meadows and Norwich City. I’ve named him ‘Murphy’ after the legendary Lincoln City manager Colin Murphy.

It was the worst Christmas ever. There was not a feather in sight. Never mind, I thought, my birthday is just around the corner – it gives me five weeks to work on Mrs P.

As the day (Feb 5th) drew ever closer I dropped subtle hints about ‘Murph’ but Mrs P was keeping cool and keeping stum. 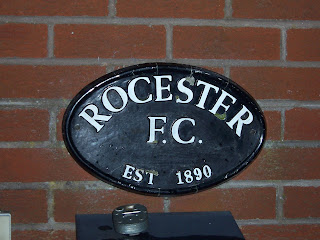 It’s the morning of my birthday. I skip down the stairs and into the lounge; I’m sure I can hear a bird singing. It’s true, I can. It’s the larks in the garden. There’s not a sniff of a budgie. I get after shave, a dressing gown and some H&M vouchers. I convince myself that Murphy will be dive-bombing me in the lounge on my return from work.

I’ve been at work an hour or so. I decide to delve into my bag for a piece of fruit. I undo the zip on my rucksack. I notice another present tucked away under my snap tin. I rip the paper open and begin to do cartwheels around the office. It’s a box of Trill readers. Whoopee!

I burst through the front door when I get home. My heart is beating ten to the dozen. It’s going to be the start of a beautiful relationship. Sticky and Murphy? Or Murphy and Sticky? Who cares? What a partnership. 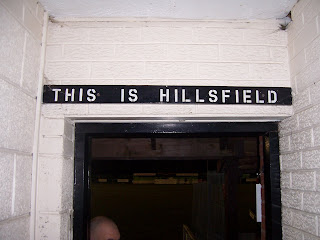 “Where is he? Where is he?” The kids are rolling about the floor. Mrs P’s sides are splitting. The Trill was a practical joke. There’s no budgie. “Never will be”, roars Mrs P. She’s allergic to feathers and has asthma. It’s the worst birthday ever. Watch this space readers. I WILL be buying a Murphy.

I took the weekend off from groundhopping to recharge my batteries. There’s an age group we need to strengthen at the centre of excellence. I trawl Nottinghamshire, Lincolnshire and Leicestershire in search of prey.

I’m back in time on Saturday afternoon to watch Sticky junior’s quick feet on the gluepot surface of Keyworth Recreation Ground. A team from Hucknall – a tough, old mining area in north Nottinghamshire – have too much guile and steel for the farmers’ boys. 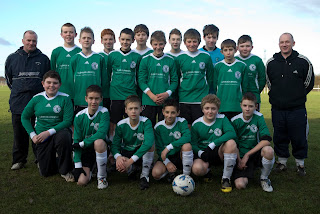 I come up trumps in Grantham on Sunday afternoon – the birthplace of former British Premier and serial coal mine shutter – Margaret Thatcher. The game is played at the South Kesteven Leisure Centre – on the same pitch that Grantham Town first team, the previous day, thumped a pitiful Willenhall Town 4-1.

It’s Tuesday February 9th. I’ve pulled another muscle in my lower back and I’m writhing in agony on the settee at home watching Sky Sports News. I notice the red info bar running horizontally at the bottom of the screen. It lists the Zamaretto Premier League games. Rugby Town v Hednesford Town is not amongst them. Ooh heck, I best find another game.

‘The Skipper’ and Sticky junior have gone football training, whilst Mrs P is ‘working out’ (chatting to her mate) up the gym. 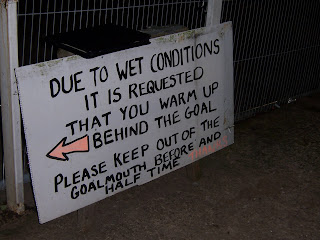 I lock up the house and step outside into the biting wind. Finley Palmer dives under his cage to avoid being put to bed. I enter his yard, crouch down to scoop up the wee fella and place him gently onto his bed of straw. He gets a ticking off for his hide and seek gag, as my glass back is causing me gip again.

I pick The Taxman up at 6.30pm. I inform him that there’s a change of plan and that we won’t be following the 3500 Nottingham Forest fans down the M6 towards Warwickshire, but instead, will be heading north west down the A50 into Staffordshire.

The Taxman excitedly retells the tale of his mate’s 60th birthday party. It was held at the Langar Kart and Quad Centre. Ten people took part. I’m not saying that The Taxman is a slow driver but even the Anthill Mob overtook him. Apparently the owner of the track, with the evening sunset approaching, threw him some keys and told him to lock the joint up and turn all lights off. He never got out of second gear. 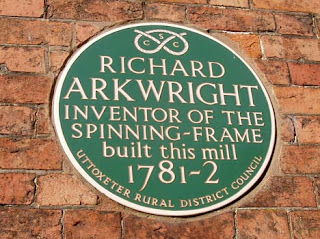 We breeze down the A50 towards Uttoxeter. I turn right at the roundabout where the McDonalds is situated. We’re soon driving over a hump-backed bridge in the picturesque village of Rocester in Staffordshire. It has a population of 1500 people and lies four miles north of Uttoxeter.

JCB is the region’s major employer. It has its world parts centre just off the A50. Sticky’s favourite English film director, Shane Meadows, was born in the area. I’ve not had a full night’s sleep since watching his spine-chilling thriller, Dead Man’s Shoes.

I’m piloting down the main street (the village only has one road). Two police cars are parked outside a town house. Plod is knocking on the door, probably begging for a brew. The Taxman nips into the local chippy to ask for directions.

The ground is smack in the middle of a huge building site. The JCB Academy is under construction. It comes at an estimated cost of £22 million and will take in its first intake of students later in the year.

Cash-strapped Rocester are a club in crisis. The Romans are still reeling with the news, only a few weeks ago, of the resignation of their chairman and company secretary. Talking to locals, it’s a situation shrouded in mystery. Rumour has it that the players are no longer being paid.

We park at the back of the building site. We trawl our way through the mud and sludge, along some planks of wood and through a single turnstile. 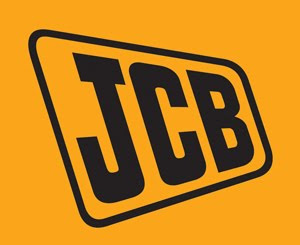 Admission is £5, very kindly paid by The Taxman. A superbly produced programme is snapped up for a bargain-price £1.

I like the quiz question in the programme: Who was the first British player to be transferred for £2 million pounds?

Rocester Football Club were formed in 1876 and play at the Hillsfield, on Mill Street, in the village. They ply their trade in the Aspire Midland Alliance. They currently sit just outside the bottom two.

Tonight’s visitors are Coventry Sphinx. They lie eighth in the table but have only won three times on their travels. Fifteen goals from 11 games is also a poor return. Oh dear folks, it’s looking like a 0-0. 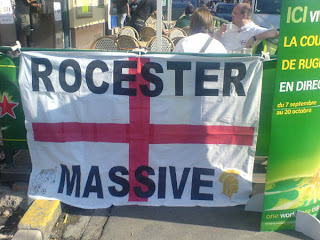 We position ourselves between the two dugouts. I can’t be bothered to walk around the ground tonight. It’s way too dangerous with all this building work going on.

The first half is truly awful. There’s huff, puff, endeavour and effort but the game is devoid of any quality. To be fair the playing surface is more suited to growing potatoes. The Romans try to play football, whilst Sphinx look to hit the ball early into the channels or over the top.

There’s a blonde haired chap who is part of the Sphinx management team. He’s an unpleasant individual who swears at the linesman and mocks the locals about their accent. He’s wrapped up in a Coventry scarf, constantly chews on his gum and proper fancies himself. His behaviour is arrogant and unwarranted.

Chances are at a minimum, neither goalkeeper is tested. Half-time can’t come quick enough. On 47 minutes, the referee blows his whistle for what seems to be the umpteenth time, to end the opening half.

Sticky is straight to the tea hut. Apologies to Bardon Hill and Wollaton FC but this is the brew of the season. It’s poured from chest height by a buxom young lady. The texture is spot on, the temperature piping hot. Even that Jessie, Jason, off Dancing on Ice would give it top marks.

It’s straight in the clubhouse. We peer up at the half times on Sky Sports News. Forest, County and predictably my old team Lincoln City, are all behind. The Imps are losing to bottom of the heap Darlington. The sooner Chris S***on departs the better. 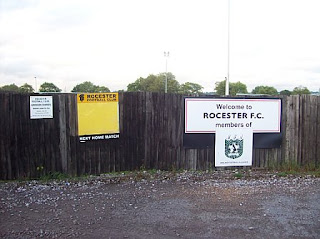 There’s a marginal improvement in the second period, but the lack of width and a whistle-happy referee kills the game stone dead.

With the game approaching the dying embers, White Van Man is on the blower. He’s roaring down the phone that I’m watching another 0-0. He’s watching Shepshed Dynamo in a Leicestershire County Cup game. Screats has been sent off again: He’s had more red cards than Joey Barton.

The only player with genuine class on the park – Kelvin Phillips – seizes upon a loose ball in the 95th minute, to tuck away his chance into the bottom left hand corner of the net. Thank the Lord!

Woman of the Match: The Tea Lady

Hey there I am so grateful I found your blog, I really
found you by accident, while I was looking on Google
for something else, Nonetheless I am here now and would just like to say
cheers for a fantastic post and a all round enjoyable blog (I also love the
theme/design), I don't have time to read through it all at the minute but I have bookmarked it and also added your RSS feeds, so when I have time I will be back to read a lot more, Please do keep up the great work.

Here is my blog: Xength X1 And Testoforce