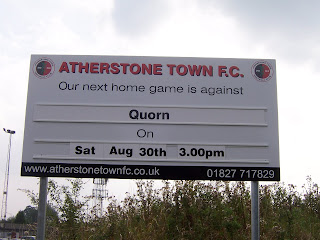 We’ve all headed off north to see my brother and his family in York. It’s evening time and me and my bro are in the York city centre buying an Indian takeaway. There’s a real ale pub in York I’ve been meaning to chalk off for years; it’s called The Maltings, and I’m not disappointed. It’s opposite the railway station and looks fairly ordinary from the outside. It’s a hidden treasure. I have a couple of beers from the York Brewery and a micro brewery from Knaresborough.

On the Friday we head off to Flamingo Land, I’m pranging out, real scared, they’ve some awesome, terrifying rides at this theme park, which the kids are going to force me to go on; I dip out on just the two. 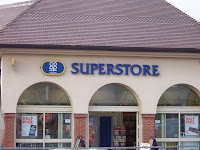 We head back home on Saturday morning; Mrs P knows I’m keen to get a game in. It’s my second FA Cup preliminary round game of the season. I’m trying to specialise in the FA Cup, FA Trophy and FA Vase this season.

White Van Man fails to make the trip once again, he’s at a wedding. You can guarantee for sure that he’ll be at the front of the queue for the evening buffet. 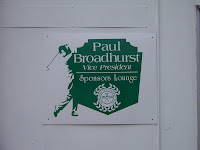 The Nuclear Scientist is back from France and rearing to go; he’s chauffeuring me in the Jaguar today. The Taxman appears at 1.30pm.

The Nuclear Scientist can’t get his sat nav to work. We cruise down the M42 and along the A5. I drove this route for a while, many years ago, during a short spell at what must now be Britain’s largest working coal mine: Daw Mill Colliery.

As we enter the commuter town of Atherstone an ambulance shoots out in front of us from its station, its lights flashing and sirens wailing. 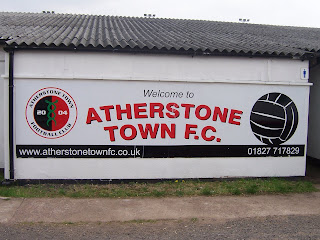 Atherstone is in north Warwickshire and has a population of 8000. It was once famous for making hats. The golfers Paul Broadhurst and Steve Webster were both born in the area. Broadhurst is president of Atherstone Town FC.

The town is also well known for its Shrove Tuesday Ball Game. It’s played with a ball weighing 4lb, filled with water. Hundreds of people in the streets of Atherstone down tools for the afternoon and throw the ball around for two hours, in what can only be described as an almighty ruck. The game has been played on Pancake Day for over 800 years. Pancake Day, another special day in White Van Man’s diary.

The Adders have had a chequered history. They were originally formed in 1887. They have gone into liquidation on two occasions in recent times. But the current management are doing a sterling job in navigating the Adders back up the Non-League Pyramid where they belong. They currently ply their trade in the BGB Southern League, Midlands Division. 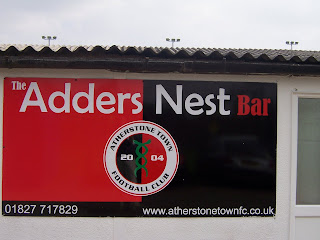 I saw them play in the Vase, just under a year ago at Gedling Miners’ Welfare. They turned up in their big posh bus, thought they’d won it before a ball was kicked. Reality kicked in after seven minutes when they were 2-0 down. They clawed it back to 2-2 after 12 minutes, but finally bowed out 3-2. It was, in non-league terms, a giant-killing.

Quorn FC were formed in 1924 and are from north Leicestershire. They play in a different league than the visitors, the Unibond Division 1 North, but it’s the same level, Step 4. Dion Dublin and Luke Varney have both played for the club. Quorn is famous for fox-hunting; it was one of Prince Charles’ favourite hunts.

We hit Atherstone in 50 minutes. NS fills up the car with petrol, whilst I continue my fascination or obsession with the Co-op supermarket, by using their cash point machine. The Sheepy Lane ground is on the outskirts of the town. 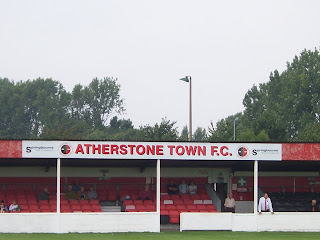 I’m having a read of the Atherstone Recorder that NS kindly picked up at the petrol station, and I have to say it’s all kicking off. The paper reports there are plans for a Gypsy Site in the area, and there are pictures from the Austrey Open Gardens Day. There’s also a Tribute Night on at the Atherstone Red Lion Hotel starring: ‘Neil Diamond, ‘UB40’ and ‘Blondie.’ It’s £25 per night. See you all down there.

We reach the ground and car parking is free. It’s £6 admission, I pay NS in for driving. The programme is £1.20. It’s quite a thin publication, but it’s packed with information and players’ profiles.

We pop into Adders Nest Bar. NS necks a shandy in three gulps, The Taxman is left standing with three quarters of a pint of lager. I’m dying of thirst and drink a Lucozade Sport. 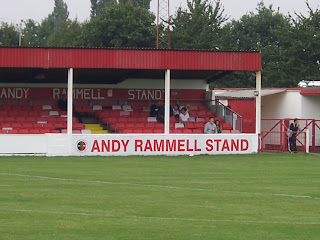 All the officials and staff are really friendly. The bar, despite being one of the tiniest I’ve been in on The Hop, is full of memorabilia and photos.

After waiting for an age for The Taxman to finish his pint, we take a wander around the ground. The pitch is on a slope and has a few bumps and hollows in it. Both ends of the ground are open and raised. There is a long main stand on the side the players walk out from and a covered terrace opposite it.

The Andy Rammell Stand is named after the Adders’ former forward who they sold to Manchester United for a then club record fee of £40,000 back in 1989.

Quorn coach and former Notts County legend Charlie Palmer is warming up the visiting team. They have had a miserable start to the season and have yet to have won a game. 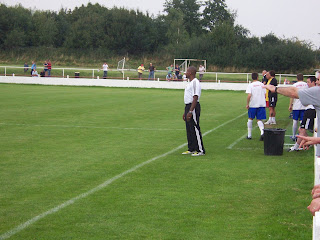 Atherstone kick down the slope in the first period and still play a John Beck style of play. Left back Dominic Reece, despite having a cultured left peg, always hits the ball early into the corners, where it’s always met by one of the industrious forwards, unfortunately it’s either offside or the move comes to nothing. They look for corners or throw-ins. It’s from one of these set pieces that Barlone heads over from close range.

White Van Man’s not a big fan of Quorn’s Justin Jenkins, we’ve seen him a few times now, and he has yet to break sweat. The big fellow will have to take an aspirin tonight, as he wins countless headers, one of which is point blank and straight at the Adders’ ‘keeper Williams. 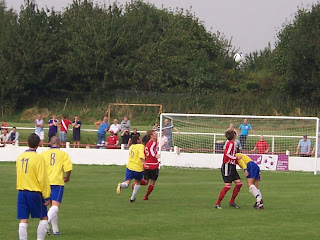 Quorn are superior in the first half and play the better football. Byrne and White find success on the wings but there’s no end product.

The bar is packed at the break. I manage to pop in, but don’t hang around on receiving the grim news that the Tricky Trees are 4-0 down at Molyneux.

The snack bar is mobbed out. We decide to have a tea later and stand nearer to the goal that Quorn attack, as they look more likely to score.

Atherstone Town give a rousing second half performance and play far more of a passing game up the hill. The turning point is when substitute James Dance is thrown on. He works tirelessly and Quorn have no answer to his energy and strength.

Quorn ludicrously sub their best two players in Jenkins and Byrne. Their two replacements Hearn and Beard have no effect on the game.

The queue at the Adders Snax Bar has subsided somewhat and we are finally served refreshments. Minestrone soup is a steal at 60 pence, but we plump for tea instead. It’s marked with 6 out of 10.

Former Forest trainee and Chasetown cup hero Nick Hawkins hits the base of the post for Quorn. Williams is injured in attempting to save his shot and is stretchered off with a sore head and knee. 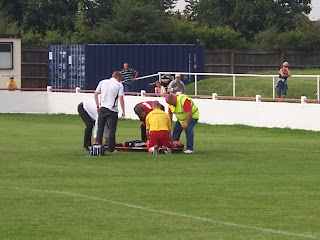 After a long spell of pressure from the home team, they finally take the lead. Bates whips in a cross from the left, which Barlone heads home.

The Adders have further chances to increase their lead and look particularly dangerous down the left.

Quorn have lost their shape since the substitutions and are dire in the second 45 minutes. I ask one of their subs warming down if Byrne or Jenkins were injured; he says he doesn’t think so.

Man of the Match: James Dance

Thanks for the mention