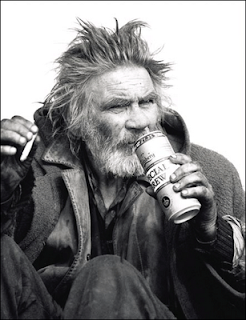 ‘The Skipper’s’ headmaster is retiring at Christmas after 20 years service. We all poled up to his final Christmas play. ‘The Skipper’ played a sports reporter in the play. He had to read out the football results. There was a huge cheer from The Groundhopper when he read out out Wolves 3 D***y 0.At the end of the play the headmaster gave a moving speech, Mrs P was in tears, not because of the speech, but because I’d forgot to tape Coronation Street.

It’s Saturday morning, I feel a little fragile as I was out with ‘The Nuclear Scientist’ , ‘The Canadian’ ‘Big Al’ and ‘The Taxman’ last night. NS downed six pints of Hobgoblin. Five per cent is a wee bit too strong for Sticky Palms; I end the night shamefully drinking a couple of half pints. ‘The Comedian’ will slaughter me when he reads this blog. 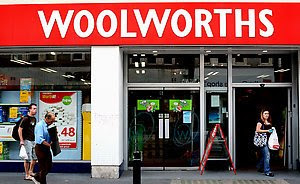 I catch the 8.15am bus into Nottingham. I whizz round town, buying a few bits and bobs for Mrs P. I thoroughly recommend anyone living in the Nottingham area to pop into Hotel Du Chocolat and checkout the blonde bit on the till; what a stunner she is. I was fumbling with my money and lost for words, when buying Mrs P a huge slab of chocolate.

I stroll up Low Pavement and have a bacon and egg baguette at the awesome E@me Continental Cafe. The proprietor has Gold Radio on in the background. West Ham born David Essex is singing Gonna Make You A Star. I remember my Nana buying me that when I was a kid. 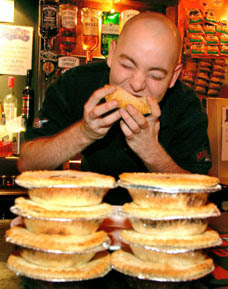 I’m back home for 10.30am. I do a few chores around the abode. I wish ‘The Skipper’ good luck; he’s playing the League leaders today in town. Sticky junior is off down The City Ground.

I take a pleasant stroll round to White Van Man’s house. I knock on his door. He looks tired; he’s been sleeping outside Woolworths all night, anticipating a 50% reduction at the pick ‘n’ mix counter.

It’s a groundhopping debut today for the legendary ‘Trumpy Bolton.’ He lives six doors up from WVM, but they don’t know one another. I spent a few years on the sauce with Trumpy before being swept off my feet by Mrs P. He’s already been to Wetherspoons at Beeston for a couple of pints this morning. It’s going to be an interesting day. 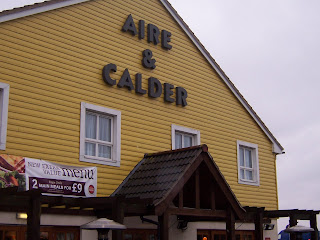 Trumpy is cramming in five years worth of anecdotes into a 70 mile journey. He’s brought a two litre plastic bottle of beer with him and is making supping progress by the time we reach the M1.

It’s driving down with rain and matches all over Notts and Yorkshire are being cancelled. The Goole secretary puts my mind at rest and says the pitch is “perfectly playable.”

We pull into the Aire and Calder Brewers Fayre Restaurant just outside Goole. Trumpy has been asking for the loo since junction 28 on the M1. He’s beginning to stagger a bit now, but thank the Lord, has a steak and kidney pie for lunch. He still manages to wash it down with a pint of Stella 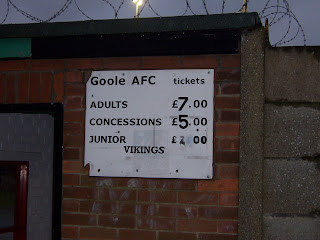 We park outside the turnstile. It’s the closest we’ve ever parked to a ground. The PA guy is playing Adam and the Ants 1981 hit Prince Charming.

It’s £7 entrance and £1.50 for the programme. Despite a deluge of rain the pitch at Victoria Pleasure Grounds looks spot on. There are two huge covered terraces on either side of the ground. Trumpy heads straight for The Vikings Bar. 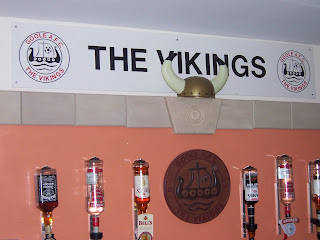 Goole is in East Yorkshire and has an inland port that handles nearly three million tonnes of cargo per annum. It has a population of 17,000. Goole has the largest water tower in England. It’s 145 feet high and can hold up to three quarters of a million gallons.

The club were originally founded in 1912 as Goole Town FC. They have just been deducted ten points for entering into administration; they owe the Inland Revenue £30,000. 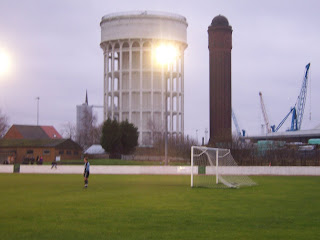 Trumpy is tucking into a couple of tins of Strongbow cider. We leave him to it and slip out the bar to watch the start of the game. 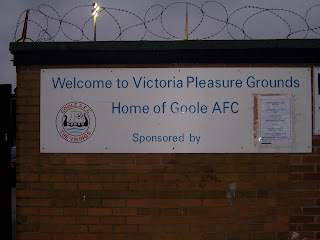 It’s obvious from the first minute that this is going to be a physical and feisty encounter. The tackles come flying in from both sides. The referee, who has history here, is soon dishing more cards out than Postman Pat. Most are for dissent or kicking the ball away.

Shepshed look vulnerable to the ball over the top and survive a couple of early scares. But on nine minutes the lively Stuart Copnell seizes onto to a Danby through ball to put the Vikings one up.

Trumpy is unimpressed with the fayre served up and decides to hunt down Rob Norris’ mum, who he knows quite well. 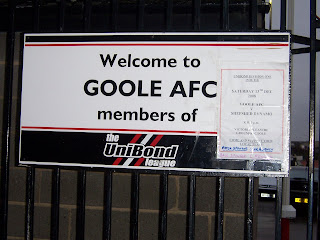 Benjamin goes close for Dynamo, but they’re soon on level terms. A quality ball in from the right from Norris is turned into the top corner of the goal by Shane Benjamin.

Shortly before half-time, with Trumpy lining up more Strongbow, Shepshed full back Daniel Fletcher is red-carded for a crude tackle on the Goole winger. Yes it’s a bad challenge, but the red seems harsh. Fletcher doesn’t leave the field without a few words and is still chuntering as he goes down the tunnel. 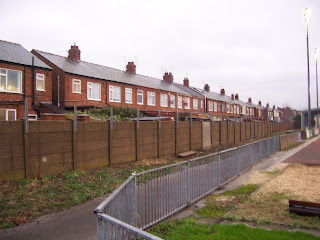 Both teams miss good chances before the half-time whistle.

At the break WVM goes on pie testing manoeuvres, whilst I shout up another couple of tins of cider. Trumpy is pretty incoherent now. He manages to slur that his beloved Foxes are 1-0 down at Carlisle.

I meet WVM, who is now sheltering from the elements on the terracing. He gives the thumbs up to the steak and kidney pie and gives the tea 7 out of 10. Trumpy is eyeing up the top shelf in The Viking Bar. 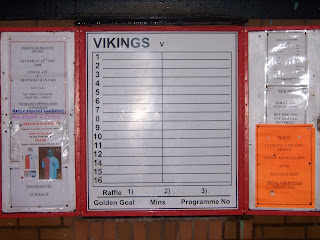 The second half is drab and dreary. It’s slinging it down with rain and the wind has picked up. The sending off has ruined the game. Shepshed have lost their balance, but still look the more likelier to score. One or two of their players look out-of-sorts today and lack belief. Their striker Ben Saunders offers very little.

Goole fail to gain the advantage of the extra player and the game appears to be petering out to a draw.

Trumpy emerges from his afternoon session for the final fifteen minutes. He’s all over the shop. The highlight of the day for him is on 83 minutes. Two old Goole supporters have seen enough and are off home for a mug of Horlicks. They’re both about aged 80 and are aided by walking sticks. They’re clearly stricken with arthritis and it’s been a magnificent effort for them to have turned out in such appalling conditions. Trumpy clocks them and bursts out into song: “We can see you sneaking out ..... We can see you sneaking out.” My sides are splitting. 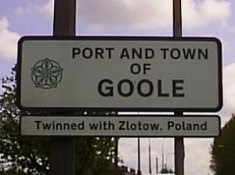 The game does not deserve the grand finale it serves up. On 86 minutes former Leyton Orient and Scarborough striker Chris Tate follows up a parry from Hateley to put Goole 2-1 up. Shepshed show urgency and win a corner on the left. The resulting ball played in is met by the gangling Millns who buries his header through a posse of players. The fantastic Shepshed supporters, who have roared on their team since the first whistle, go delirious.

Deep in stoppage time a curling 22 yard strike from Brad Hill wins the game for Goole. The moment is breathtaking and a tad harsh on Shepshed.

We’re in the car within 60 seconds of the final whistle. WVM nearly ploughs into somebody whilst trying to tune into Five Live. He’s all excited about the X-Factor final that’s on tonight. Trumpy meanwhile is slumped in the back of the car talking gibberish. He has to endure a 90 minute journey without a drink for the first time today!

Man of the Match: Trumpy Bolton
Posted by Sticky at 7:46 PM

No doubt Mrs P will be down the boozer again. It has not gone unnoticed how you are raising the boys single handed, while the other half is doing a very good Amy Winehouse impersonation!

1 hour 15 min to get back not 90 minutes and that was your folt i nearly crashed wanting radio 5 on . and it was steak pie not kidney . never sending off two players in for tackle ref must of been stopping in 2 sat nite to do all is paper work . ilkeston here we come tue nite i think

Another spirited article from The Bard of Keyworth. However,please do not publish your feeble attempts at the noble art of imbibing the hallowed liquid.The word half is tantamount to blasphemy.You will end your days with not a tinge of tramp's sunburn on your idiotic countenance.

Well, it appears the Groundhopper mixes in some celebrated company. Judging by the epithet of 'The Comedian' and the manner in which the pseudo author composes the comment, it can be only one person. He's been voted shagger of the year 2006 & 2007, dresses like an S&M Willy Wonka, an ex heroin addict and alcoholic.
Welcome to the comments page Mr Russell Brand!!
Now how about passing me the phone number of Andrew Sachs grand-daughter?

Forgot to add Trumpy Bolton sounds like a hero!

Interesting about the water tower. Great backdrop - and well worth visiting the ground for in itself, I should think. Must get there soon.

That's no water tower, it's the processing plant for trumpy boltons afternoon cider!