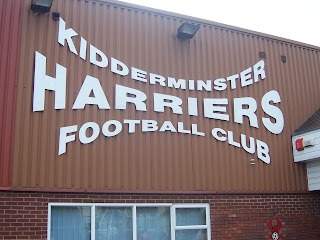 It’s Sunday June 27th. England have been sent packing by a youthful, vibrant German team. A divided camp has contributed towards one of England’s worst displays in living memory. Cappello’s tactics are baffling.

Sticky Palms crushes another can of Stella Artois and hurls it into the blue recycling bin. I tidy up the patio after a family barbeque. There’s an eyrie silence around our village. The World Cup is over.

I decide to water the front garden. I look up from my watering can towards my two boys’ bedroom windows. ‘The Skipper’ removed his England flag days ago after a Robert Green faux pas had gifted USA with a deserved equaliser. 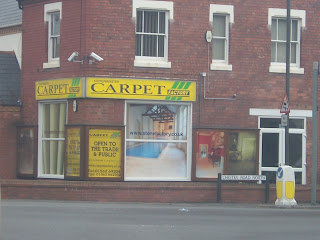 Sticky jnr is made of sterner stuff. His flag flutters in the evening breeze. It’s only on closer inspection that I notice he has scribbled in permanent black marker pen below the word England – ‘Are Shit.’ It makes The Groundhopper chuckle for the rest of the evening.

It reminds me of an interview with Patrick Viera I read in The Sunday Times a few weeks ago. He was talking to his colleague, the Manchester City full back Micah Richards, about his career ambitions. Richards said he’d like to win Premiership and World Cup. Vieira reply was: “How do you expect that to happen when you are the last player to arrive at the training ground and the first person to leave it.”

It’s Friday night and I’m sat in bed reading the wonderful ‘Brian and Peter – A Right Pair.’ It’s a book written by Clough and Taylor’s old chief scout Maurice Edwards. A bumble bee nose-dives from the curtains and buzzes around my face. I Usain Bolt it out the bedroom. 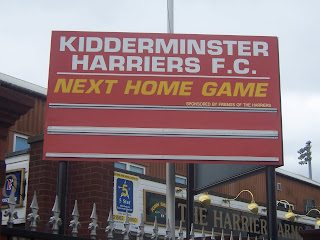 Mrs P reassures me that the bee has flown out of the window. Six hours later I’m awoken by Sticky jnr and his pals larking around in their tent in the garden. A bleary-eyed Groundhopper troops down the stairs and into the garden to remonstrate with them.

I’m back in bed when I hear a buzzing noise again – that bloody bumble bee is back again. What a start to the season.

It gives me a chance to download some music onto my i-Pod. ‘Shifty’, my mate at work, has got me into German producer Mr Confuse, who’s from Hannover. 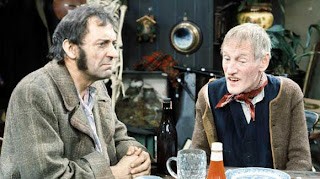 I make an early start on my chores. I fill the car full of rubbish – Sticky jnr has cycle parts strewn all over the garden – it looks like Steptoe and Sons scrap yard. I drive down to the recycling centre in West Bridgford. I stick my Pod on. Blue Rondo a La Turk’s 1982 hit Klactoveesedstein blasts around the car.

I arrive home, mow both my lawns, bolt down a ham and cheese ciabatta, before leaving Mrs P to her hoovering. ‘Angry Kid’ (Sticky jnr) is playing cricket in the garden. He’s lost his temper and smashed the ball into next door’s garden. It’s six and out son.

The Nuclear Scientist has arrived in his Jag. ‘The Skipper’ and Snooksey make up the foursome. 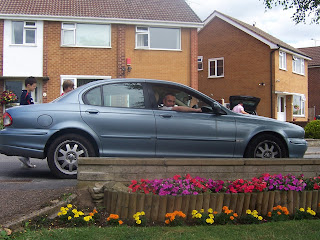 The drive is uneventful. Five Live are at Grand Prix qualifying and Royal Ascot. The highlight of the journey is when we pass an Aston Martin garage close to Kidderminster. The kids’ eyes light up.

We arrive in Kidderminster in one hour and twenty minutes. We slip the Jag down a side street to avoid paying a parking charge.

The boys are dispatched to a sweet shop, whilst Groundhopper tours the perimeter of the Aggborough to take a few snaps. 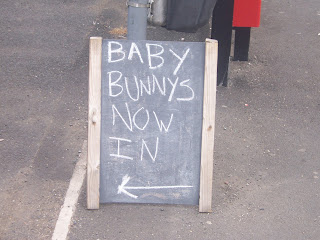 It’s £10 admission and £3 each for the kids. I grab a team sheet from the club shop. It’s disappointing to note that Forest have sent their youth team to this fixture. Oh well, it will give me the chance to scout their team as Notts County under 18s are the visitors at Forest’s Academy next weekend.

The Tricky Trees are sending two sides out today. I looked into the possibility of visiting Peterborough United’s London Road ground, but was shocked to read on the excellent ‘Lost That Lovin Feelin’ message board that pricing was £22 for seats and £17 for terrace. It’s £10 entry at the Aggborough – it’s a no-brainer.

Kidderminster is a town in the Wyre Forest district of Worcestershire with a population of 55,000. It’s 17 miles south west of Birmingham and 15 miles north of Worcester. 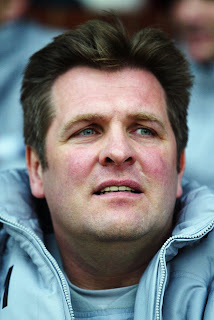 The River Stour and the Staffordshire and Worcestershire Canal flow through the town centre.

The town is famous for the modern carpet industry. The local paper – The Shuttle – is named after the shuttles used on the carpet looms.

Famous people born in the town include: the inventor of the Penny Black stamp, Sir Rowland Hill, Rachel Jones, the producer of the Chris Moyles Radio 1 show (Moyles – not fit to lick Chris Evans’ boots) and Alun Evans, who became England’s first £100,000 teenager when joining Liverpool from Wolves in 1968. 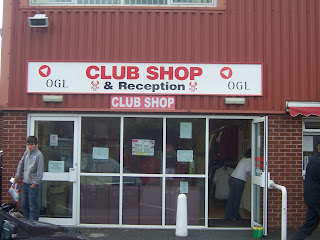 Harriers were the first team to host a floodlit FA Cup match, when on 14th September 1955 they played Brierley Harriers Alliance in a preliminary round replay.

On 14th September 199 Harriers were hosts to the world’s first ever senior football match to be presided over by three female officials against Nuneaton Borough.

Harriers faced Stevenage on 12th May 2007 in the FA Trophy final; the first competitive game to be played at the new Wembley Stadium. 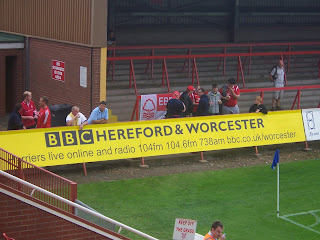 The ground is neat, tidy and painted in red and white. There is terracing at both ends, with seating on both sides. The surface appears flat and lush. From the stand there is a panoramic view of the Malvern Hills.

Former Radio One 70s DJ Tony Blackburn must be on the Kiddy decks as we are subjected to Boney M, Elvis Costello and Bruce Springsteen. He tries to salvage the situation with Dutch Techno act 2 Unlimited. 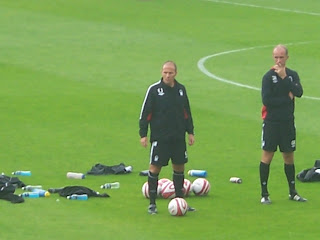 Forest have a German celebrity fan called Ebbe. He’s followed the club for over 30 years. He and his missus are amongst the 153 travelling support who have made the 150 mile round trip today.

Mrs Ebbe wiggles her hips and shakes her booty to a Pigbag remix – it’s not for the feint-hearted and puts Snooksey off his £3 burger which he fumbles onto the floor (yes he is a goalkeeper).

Former Aberdeen and Scottish international Eoin Jess is at the helm today; he is assisted by keeper coach Steve Sutton. 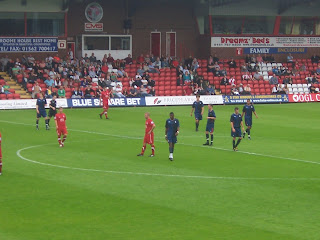 Forest have sent a mixture of first year pros and second year scholars. Kidderminster look to be at near full strength.

The Reds have the better of the chances in the first 15 minutes. Republic of Ireland midfielder Robbie Gibbons has three efforts at goal, whilst 19 year old forward Nialle Rodney also blazes over.

The Harriers start to look threatening and begin to exploit space down the Forest right hand side. They take the lead on 30 minutes. A short corner is played back to triallist left back Aaron Griffiths, who hits a high curling ball into the area. Former Sheffield United, D***y County and Leicester City striker Lee Morris rises between two defenders to nod the ball home. 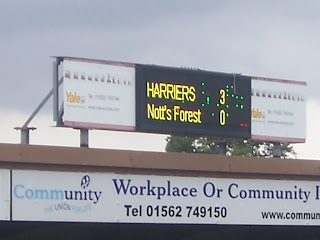 The young Tricky Trees drop deeper and deeper and play without penetration. The Harriers score again with an unmarked Chris McPhee smashing the ball home from close range.

Shortly before half-time Kiddy put the game out of reach. McPhee is set up by Morris, he strikes a shot from distance, it deflects off a Forest defender, wrong-footing Reds’ keeper Karl Darlow.

Mrs Ebbe tries to raise spirits at the break with an unusual dance routine to Black Eyed Peas smash hit ‘I Gotta Feeling.’ It’s a NO from me. 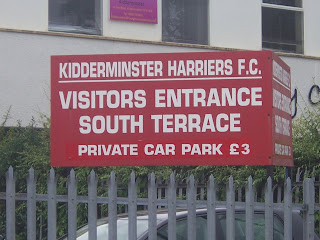 There’s no world renowned home-made cottage pie up for grabs at the tea bar, I settle instead for a cup of powdered tea at 75 pence per cup. It receives a mark of one out of ten, just for being hot. Yuk.

The visitors have four Greek Cypriots in their squad today, a fact the Kidderminster MC was very unhappy about as he bravely attempted to pronounce their names over the tannoy. A Forest wag in the toilets enquires whether Forest have a scout in the Ayia Napa area of Cyprus. Let’s face it folks Cyprus is hardly the hot bed of international football. 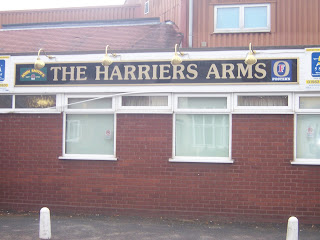 The game continues to flow in the second period. Gibbons rattles the underside of the bar from 30 yards out. Harriers also hit the woodwork, following a cheeky lob by Lloyd Kerry. Only a series of blocks and saves by Karl Darlow manages to keep the scoreline respectable.

Forest have been hugely disappointing. Yes I know it was the youth team, but we all expected so much more. It will be interesting to see if they can bounce back against a fully-charged Notts County next Saturday.

The spine of Kiddy's team have been impressive; Allbrighton has snuffed out Rodney, Briggs has controlled the midfield and Morris and McPhee have been busy up top.

Man of the Match: Keith Briggs

Excellent report again Sticky. Kiddy boss Steve Burr relied on Keith Briggs when he was Manager at Stalybridge Celtic. Briggs is a quality midfielder who has somehow slipped the net of stardom. I hope he gets recognition at his new club.