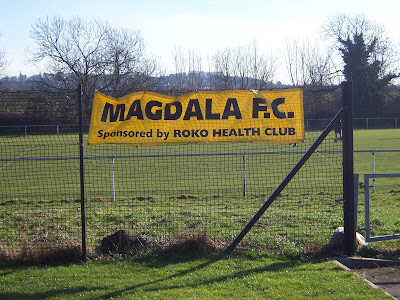 She’s beautiful, slim, warm and sat on my lap – yes after 10 years of working for a laptop computer company, I’ve finally got my hands on one. I can surf the net, whilst sitting next to Mrs P, as she watches Skating on Thin Ice and Wild at Heart.

The Taxman phoned me last Sunday evening, just as pop nobody, X-Factor winner, Ray Quinn was taking to the ice. While we both moaned and groaned about Forest’s inept display the previous day at St Andrews, Quinny was giving the performance of his life. By the time I’d put the phone down he’d received five perfect sixes: the first time this has happened since Torvill and Dean at the Winter Olympics in Sarajevo 25 years to the day. 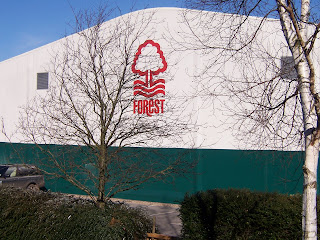 It’s been another midweek without a fixture for The Groundhopper: I’ve been ferrying the kids around to football practise. On Thursday we all crowded around the TV set to watch Notts legend, Graeme Swann, nearly spin his country to victory in the Caribbean, with a beautiful spell of spin bowling. Even Mrs P watched it.

It’s Saturday morning and I’ve a full day of football ahead of me. ‘The Skipper’ is playing in town and Mrs P will be supporting him. Sticky junior has blagged a ticket for the Forest v Sheep game at The City Ground. 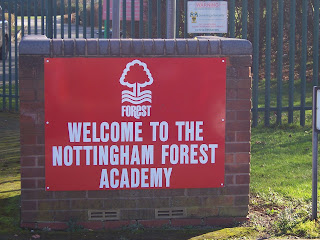 I’m out the house at 9.30am on scouting duties for the Tricky Trees. I head towards a neighbouring village to watch a game. The coach is a lady, who is most welcoming. The ladies in the kitchen provide me with a warm drink. I’d mark it with 7 out of 10. Her young pups are five goals down at the break but her pep talk is kind and encouraging. Her team respond.

I drive back home and carry out a few chores to keep me in good books before jumping back into the car and driving down The Academy. I drive through the characterless Compton Acres and turn right onto Wilford Lane and finally into Gresham Close.

Scottish singer Midge Ure from the band Ultravox is on the Jonathan Ross Radio 2 show. Ross plays the 1982 hit Reap the Wild Wind. Apparently they are reforming. 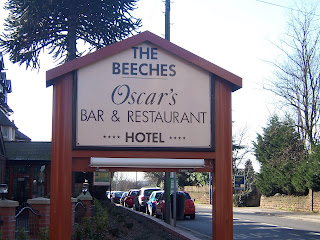 I grab another cup of tea and have a stroll up to the under 18 game. ‘Dirty Dirty Leeds’ are already two up and Forest’s Tim Hopkinson has missed a penalty. The Leeds number seven. Joshua Falkingham, is running the show. He snaps in the tackle but has poise and beauty. He always wants the ball and never wastes a pass. I bet he is the first name on the team sheet. Forest hit the woodwork twice but lack quality. 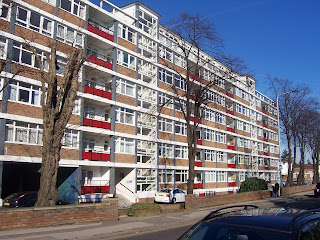 It’s been a busy week down The Academy, teams from France, Poland and Ireland have played games against our sides, as well as the local community club UNITY, a project spearheaded by my good friend Morris Samuels, to unite the youth of the Meadows, St Anns and Radford.

I’m back in the car again. Radio Nottingham’s Robin Chipperfield is pitch side at The City Ground as the teams head out the tunnel. ‘A’ Block are singing ‘worst team in history.’ I’m not sure who it’s aimed at. Recent absentees Paul Anderson and Robert Earnshaw are in the starting line-up. 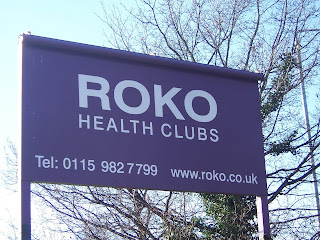 I turn into the car park at The Beeches Hotel, I’ve time to kill and time for a pint. Opposite the hotel is the Rivermead Flats which is a local eyesore.

Villa are playing Chelsea in the lunchtime kick-off; it’s no goals. The barmaid is ignoring me. Apart from one table the place is deserted. I finally order a pint of the award-winning Harvest Pale Ale from the nearby Castle Rock Brewery; it costs £2.65. I sit the corner on a leather sofa and watch the world go by.

Magdala Amateurs were formed in 1904 and play just down the road at the back of the ROKO Health Club, who are their main sponsors. The place seems familiar from my pub-playing days. I reckon it’s the old Civil Service Ground, but can’t be certain. 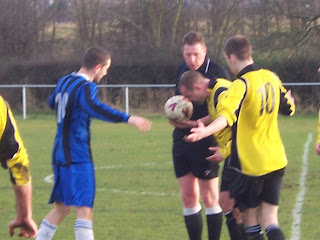 I’m the only supporter in the ground. The teams are doing some fitness drills. I can’t help but notice the contrasts in style of coaching already. Magdala’s is regimented, structured and focused, whilst Basford’s is relaxed and fun-filled. I recognise the Magdala coach from an FA course I did a few years ago, when he was the tutor. Football is a matter of life and death to him; he takes the game very, very seriously and does not suffer fools.

Basford United were formed in 1900 and are one or two tipsters dark horses for the NSL title. I’ve been meaning to watch them for a while and will visit Greenwich Avenue later in the season. 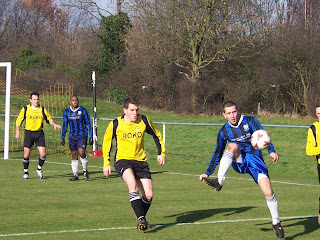 My mobile suddenly goes off; it’s Sticky junior live and exclusive from The City Ground. He’s in bits, Forest are three down; he’s nearly in tears. I’m so proud of him that he supports his local team, like I did mine (Lincoln City).

Magdala are fourth in the table but their squad today is somewhat depleted due to a stag weekend. Their ‘keeper certainly hasn’t took advantage of the discounts their sponsor offers on cheap gym membership. He looks like Billy Casper’s sports teacher in the film Kes. Having watched the warm-up, a mental note for Basford should be shoot on sight. 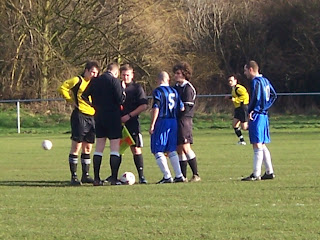 The teams are ready to start; Basford’s shirts are similar to Inter Milan, whilst Magdala are more Cambridge United.

The first thing that strikes me is how some of the players look out of condition. Magdala play more like a unit and do get something resembling a passing game together. The woodwork is their nemesis though; the ball smacking against it on no less than three occasions. What they lack in fluency they more than make up with an end product. 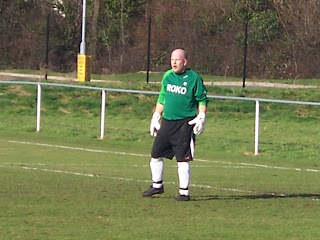 By now United are squabbling with all and sundry. They contest every marginal decision, be it a throw-in, free-kick or foul. This lot could start an argument in an empty room. If there was an Oscar Awards Ceremony for whinging, moaning and snarling, they’d be collecting gongs all night.

Star striker Kev Walker wastes a golden opportunity, clipping the ball the wrong side of the post when through on goal. 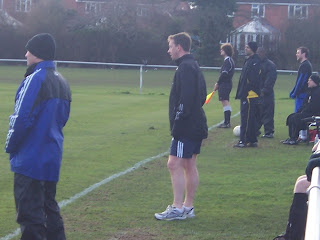 John Bentley, the Magdala manager is fairly restrained, although I did notice a posting by him on the NSL message forum a few months ago complaining that ‘Dala’ had had eight very poor and crucial decisions go against them this season. He’s dressed in a tracksuit top, shorts, trainers without socks and is sporting a pair of black gloves. How bizarre.

Even Basford manager Chris Munroe has had enough of his team’s tantrums. He tells them all to shut up and start playing some football. 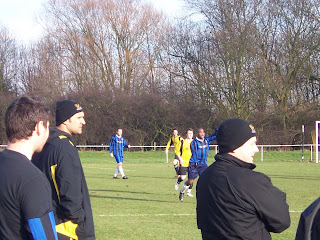 White Van Man has arrived on the scene from the Forest game and is not in the best of moods. He’s a member at the ROKO Health Club and takes me in for a cup of tea. It’s served in a Costa coffee cup and is an extortionate £1.20. It gets a 6.5 from The Groundhopper. I nearly choke on it when I catch WVM tapping his feet to New Edition’s Candy Girl

The Basford chairman is in the bar, we have a quick chat, I don’t think he’s best impressed with the attitude of his team.

White Van Man heads off to the gym; people that know him will find that hard to believe. I ask him if I can have a photo of him on the running machine, with me dangling a Pukka pie on a piece of string, just in front of him. But he’s not playing ball today and is having none of it. 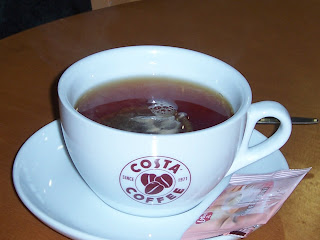 Basford pick up the pace in the second period. Walker begins to show glimpses of his skill and pace. He curls one just wide of the post and is beginning to get behind the defence. Jack Caulton sees an effort come back off the crossbar. Two footed midfielder Richard Oakes rises above the mediocrity of the game, keeping things simple, breaking up play and retaining possession.

Magdala are still fashioning chances at the other end. Ashley Robinson hits an outrageous shot from distance which is tipped over the bar by the Basford goalie.’Dala score a deserved winner with fifteen minutes to go. Mark Curry stabs home a loose ball at the far post following a corner. 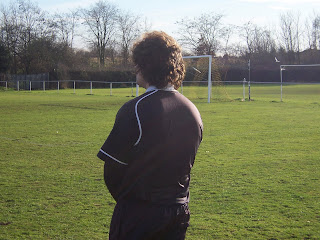 It’s a missed opportunity for Basford as news filters through that leaders Wollaton are losing 3-0 at home to basement side Gedling Southbank.

Referee Chris Stevens has come under attack for most of the game and has done his upmost to keep his cards in his pocket. He has a good second half and his decision-making is spot-on. 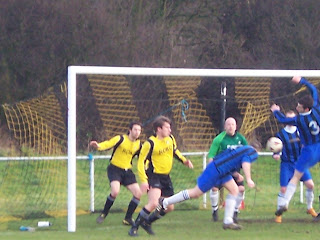 I get a text from Bilborough Pelican legend Neil Swift. He’s tapping away on his phone behind Barthez’s goal to inform The Groundhopper that Pelican are beating Keyworth 2-0. Barthez has the last laugh as The Greens pull back two late goals. A rather sheepish Swifty calls me later.

Man of the Match: Harvest Pale Ale
Posted by Sticky at 6:10 PM

Forest Derby, one off my players dads needs it, taking one off my best players (u11) to the match for a treat?. Bloody parents.

If you want a treat come and watch White Van Man on the running machine at ROKO Gym. I'm going to dangle a Pukka Pie in front of his nose.