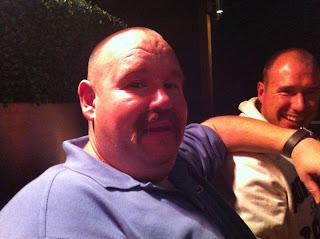 Tomorrow I am going away for a long weekend with White Van Man’s pals to north Wales. I’m nervous, really nervous. Last year we all went to Whitby. We played the Arnold Palmer Crazy Golf on the seafront. I carded a course record 20. I was high-fiving the crowd on the West Cliff top. The Cava was on ice. Victory was all but mine.

There was only Sandra left on the course. Bless her; I bet she had a few double bogeys and fresh air shots in her round. It was a drop your bacon sandwich moment when the Whitby R&A official announced her as the winner. I smelt a rat. I still do. I won’t be speaking to her tomorrow. I’m still haunted and scarred by events on that horrible day. 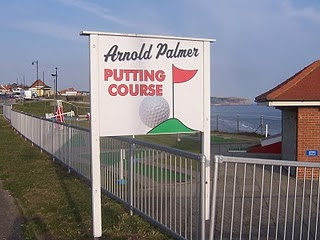 White Van Man phones up first thing Friday morning. He wants a cup of Rosy Lee, before the long trip north west. He’s frothing at the mouth when he finds out Mrs P is in the shower. “Rowdy” he roars down the phone. I warn the good lady to be on her guard.

Chris Moyles is playing Jamiroquai and The Bluetones on Radio 1’s Golden Hour. I have a stab at 1997. I’m ten pence short. There’s mayhem at the Silverdale roundabout. A lorry stacked with hay has shed its load. WVM taps the dashboard in frustration.

We meet up with the gang in Clifton and head up the A50 and M6 towards Colwyn Bay, where Team Leader, Piers (Harry Enfield dead ringer) has booked lunch at the Pen-Y-Bryn. 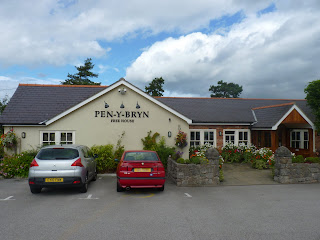 I’m straight on the Snowdonia Ale. It’s 3.6ABV and a good session beer. Sticky Palms necks a couple, washing down his Cajun chicken ciabatta. I’ve clocked Sandra sitting at our table. I sensibly decide to blank her. We’ll have our showdown later this weekend.

There’s almost an international incident en-route to Abersoch. Those two pints of real ale have done for me. I’m bursting readers. I’m crossing my legs, trying not to look at rivers, streams or the Irish Sea. I hope Radio 1 don’t play The Water Boys or ‘Waterfall’ by The Stone Roses.

WVM reluctantly pulls in for a pit stop. I dash across the road and balance perilously halfway down a steep grass bank. Two police cars hare down the road with sirens blaring out. Oh no, please, God, no. It’s a near miss. WVM is roaring with laughter. 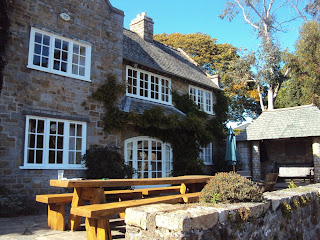 We pull up the drive of the delightful 100 year old Halfruyn House. It’s perched on top of a cliff overlooking Abersoch Beach. The gardens are breathtaking, the views stunning.

A few hours later we’re all bevied up in the Hong Kong Harbour restaurant. WVM has his knuckles rapped by a feisty, flame-haired Leeds Utd supporter for tucking into the crispy duck before the pancakes arrive. He’s proper got the monk on and face on.

He’s back on form on Saturday morning. He has his chef’s hat on as rustles up fried bacon cobs for the gang. Piers has organised a trip to a slate mine up at Blaenau Ffestiniog, the birthplace of former Lincoln City goalkeeping legend David Felgate. 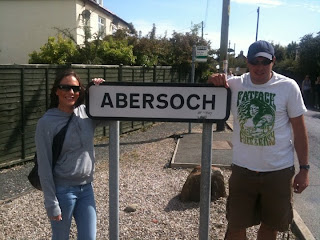 We wave the troops off. WVM and Groundhopper miss the team bus, we have an agenda of our own. Our destination is CPD Pwllheli.

I suddenly hear the theme tune of Emmerdale coming from the living room. WVM is catching up with Friday’s episode on Sky mobile. He boasts he hasn’t missed an episode in nine years. He’s unmoved and dead pan faced, when I ask if Amos Brearley and Mr Wilkes still run the Woolpack.

I take a stroll down to Abersoch harbour. I get chin-wagging to a guy fishing. He says he caught a couple of sea bass last night which he ate for tea. I ask him where’s he from. “D***y” he replies. It kills the conversation stone dead. 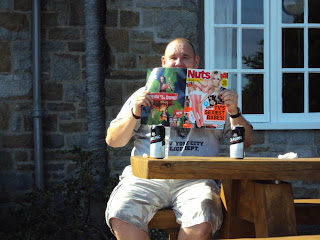 It’s teeming down with rain as we make the short 7 mile journey to the seaside resort of Pwllheli. We track down the Mooch fancy dress shop. I purchase a 70s moustache and some glitter for the ‘Abba Gala Night’ Piers has organised. We all have to wear white socks (Abersoch ... get it?)

I treat WVM to fish and chips in a sit down eatery. It’s full of noisy bikers sheltering from the pouring rain.

We’re parked up at ‘The Rec’ at just before 2pm. I’ve been whittling all morning whether the game will survive the inclement weather. I leave WVM fiddling with his iPhone and have a potter around the ground. 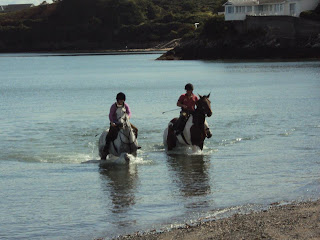 No-one is around. It’s half an hour before kick-off. We have no plan b. The pitch looks fine though. There’s a guy standing alone under covering, sheltering from the pouring rain. He’s wearing a black Berghaus bomber jacket, denim jeans and black hush puppy shoes. He has a thick Liverpudlian accent. His features remind me of the late, great Mancunian singer Ian Curtis from Joy Division.

His face lights up when he sees me ambling towards him. We strike up a conversation. He confirms the game is on. It turns out that he travels a solo 200 mile round trip from his Bootle home each weekend to watch the Lilywhites. He even went to an away midweek fixture at Conway last Wednesday.

I’m captivated by this guy already. In seven years of groundhopping I’ve never met someone with so much passion and commitment at this level. 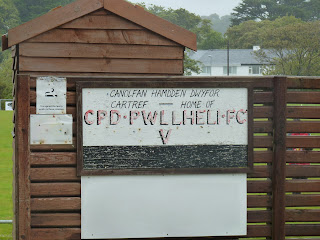 I jog back to the car and give WVM the thumbs up. We pay £2.50 each on the gate and a further £1 for a programme. I tell WVM excitedly about my new mate. We’re immediately reunited. Perhaps he and WVM can catch up on old Brookside episodes on UK Gold at half time on Sky Mobile.

It’s still siling it down with rain as the players emerge from the nearby leisure centre. The pitch has held up superbly. There are tennis courts behind one goal, with housing backing onto the far touchline. ‘Scouse’ says it never gets waterlogged due to the sandstone base.

I would put the standard as being around Step 5. Llanrwst have a couple of old heads surrounded by youngsters. The front pairing look no older than 18 years of age. 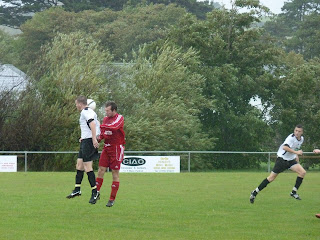 CPD Pwllheli top the table with a 100% record. I’d love to position myself behind the dugout to hear the managers but would risk a drenching and a possible language barrier.

The visitors are out the blocks quickly. Elliot Llewellyn has guile and pace in abundance. A supporter tells me he is only 17 years old. He causes mayhem but can’t pop a shot off.

Pwllheli are more direct and not shy of shooting. They have a headed goal chalked off for offside. In an entertaining first half the home team take the lead on the stroke of half time. Ben Chippendale bundles the ball into the back of the onion bag following a cross from the right. Chippendale surprisingly doesn’t remove his shirt to celebrate.

WVM has fetched the teas. We can’t mark it out of ten because no proper mashing technique was used (no teapot). ‘Scouse’ turns a beverage down. He has a heavy night scheduled in Liverpool city centre. 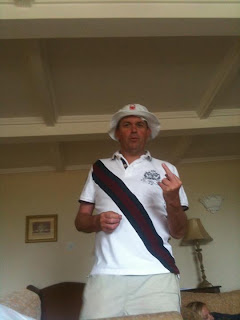 The second half is less entertaining but by now I only have eyes for ‘Scouse.’ We chat about the eccentricities of David Felgate and share anecdotes about Cammell Laird and Marine. Oh man, I love this guy.

Pwllheli score another scruffy goal after a ‘Beadle Hands’ moment from the visiting ‘keeper. It’s the fag end of the game. Pwllheli look comfortable. Suddenly a clumsy home defender gives away a penalty, which is converted by 9 Jacket.

‘Scouse’ turns a whiter shade of pale as five minutes ‘mystery time’ is played. The final whistle goes and ‘Scouse’ clenches his fist in victory (a bit like Sandra did at Whitby). We shake hands and bid a fond farewell. The guy should win Supporter of the Year.

Footnote: It’s the morning after the night before. WVM and I hit the sack at 2.30am. The rest of the posse partied long and hard into the night. It was a scene of utter devastation in the conservatory, as they hosted their own karaoke. 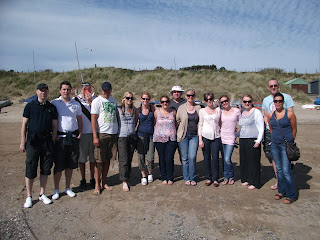 That bloody ‘Barbara Streisand’ song by Duck Sauce was my final recollection of the night. That toon has scrambled my brain through the early hours.

WVM is sat up in bed scrolling through his timeline on Twitter. Michael Owen has tweeted that he is in Abersoch for the weekend. I have a quick shave and leave WVM watching Ant and Dec’s latest piss poor effort of a game show on his Sky mobile. 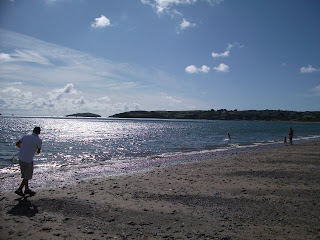 I walk onto the high street and head towards to the harbour. A young couple are heading in my direction with two small children. No-one else is in sight. The man lifts his daughter above his head and plants her on his shoulder.

We pass one another and exchange a “good morning.” For once in his life Sticky Palms is lost for words. The man was Michael Owen. I can’t half pick em readers.