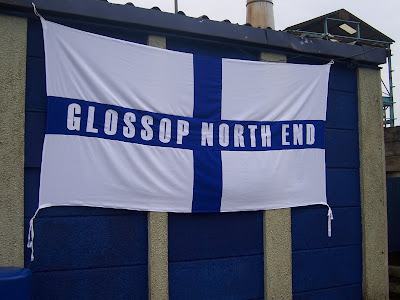 The detox diet is over and boy did I celebrate. The kids and I made our debut at the new KFC, which was the old Magpies pub, close to Notts County’s Meadow Lane ground. We didn’t mess about and ordered a ‘Family Bucket.’ Mrs P missed out she was chilaxing at the Eden Hall Spa.

It’s Saturday morning and Sticky Palms is in big trouble. Nottingham Forest Academy have asked me to go and scout a game at the glorious setting of Wollaton Park, and from there it’s straight to Glossop. Er indoors is not best pleased, as I won’t be around for most of the day. 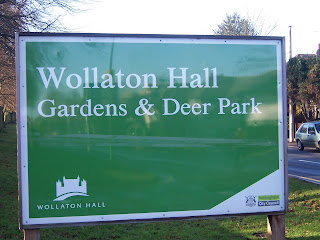 My sole contribution to the upkeep of the house is to clean the bathroom; Mrs P has nipped up to the ‘Under Wraps’ lingerie store in the village ....... steady on readers, Match of the Day is on at 10.15pm!

BLOG sensation Trumpy Bolton calls me up as I’m pouring Domestos down the toilet to arrange our impending trip to Deeping Rangers on Jan 31st. He’s currently on a tour of duty (on the piss) in Oxfordshire. 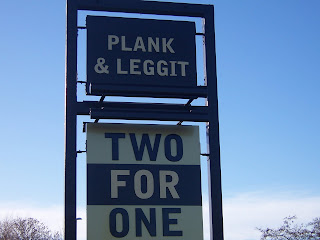 I jump in the ‘Rolls Royce’ (Mondeo) and drive to Wollaton Park. The game is an under 8 fixture. I feel very uncomfortable scouting at this tender age. It feels immoral to take these young boys away from their mates and shove them into the harsh environment of a football academy. But the proof is in the pudding. For example both Jermaine Jenas and Lewis McGugan were both at NFFC at the age of nine. You normally get a good brew at Wollaton Park, but sadly the tea bar is closed today.

I pick up The Auctioneer in the Plank and Leggitt pub car park in Sawley, Leicestershire. He lives a quiet life on a narrow boat on Sawley Marina.

He immediately puts some toons on the CD player. There’s some good stuff on it, including New Order and The Charlatans. He has a Punk CD tucked up his sleeve for the journey back. 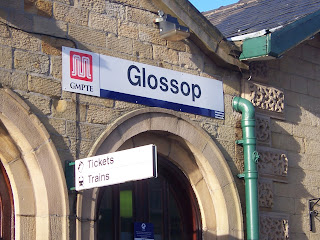 We take the scenic route down the A50 and travel up through Ashbourne and Buxton. ‘Sally’ on the Tom Tom is annoyed that we’ve not took the motorway, but we’re in no rush.

The D***yshire Peak District is bathed in glorious sunshine. It’s stone walls are a feature throughout the journey.

We drive past Chapel-en-le-Frith and arrive in Glossop at 1.30pm. We park at the back of Glossop railway station, in the Co-op car park. We’ve bought the Good Pub Guide with us and intend to hunt down The Star Inn and The Globe, with its micro brewery. 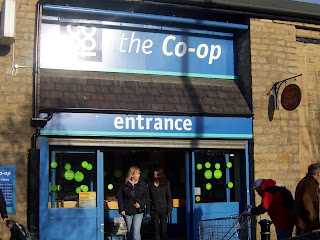 The Star Inn is a spit and sawdust real ale house, with no frills. The Auctioneer has Timothy Taylor’s and The Groundhopper a weaker 3.8ABV golden ale. It’s only a swift pint as the music from the CD player is none too tasty. REO Speedwagon and Dean Friedman ensure a hasty retreat.

We stretch our legs around this old, quaint mill town. It’s unspoilt and has kept its beauty. We find a local bakery and tuck into a bacon barm cake and a steak and onion pie. There’s no sign of The Globe, so we head towards the ground. 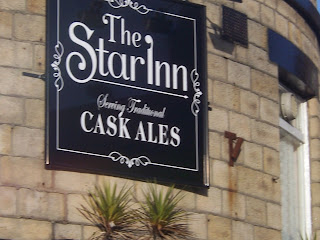 Glossop is in High Peak Derbyshire and has a population of just over 30,000. It’s 14 miles from Manchester and 25 miles from Sheffield. If Mrs P finds out I’ve come this far I’ll be heading for the divorce courts! She never reads the BLOG; only the first paragraph. 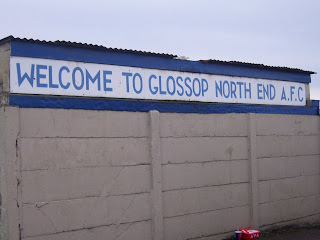 Glossop North End Football Club were formed in 1886. They were members of the Football League between 1898 and 1915. It is said that they were the first football league club in the world to register its strip as all-white.

The Hillmen have played at Surrey Street for over 50 years; it has a capacity of 2500. We take a hike around the ground; it’s surrounded by an industrial estate. There is a Tesco’s, Wickes and a KFC. The views up into the High Peak hills are stunning. At the back of the ground is a huge chimney where there was once a steel works. 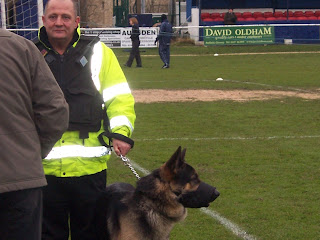 Stewart and Lloyds are an old iron and steel works’ team and were formed in 1935. They are currently in third position in the Eagle Bitter United Counties Premier League.

It’s £5 on the gate and £1 for an out of this world programme. The Auctioneer shouts the teas up; we mark it with 6.3 out of ten. There’s too many people here for them to start pissing about making pots of tea. 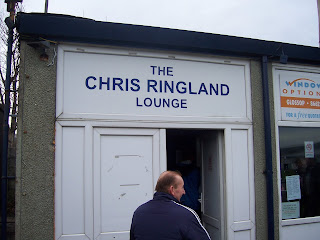 We stroll past the Chris Ringland Lounge; it’s named after a player who was tragically killed in a plane crash whilst on business in Turkey.

We meet a groundhopper from Leicester who supports Northampton Town; he’s not your stereotypical groundhopper who bores the pants off you about his trips around the European non-league circuit, he’s actually interested in the football. 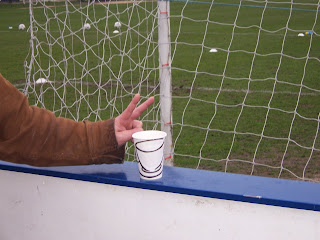 There’s a carnival atmosphere inside the ground. Behind one goal small children play in a sandpit, bantering with the visiting ‘keeper. At the opposite end teenagers congregate with a variety of inflatables that they wave in the air. The community have come together, as a whole, and the moment feels special.

Glossop North End mean business and start the game at a furious pace. In the second minute a ball is threaded through to tricky winger Dave Hodges, he knocks it out his feet and finishes with confidence. 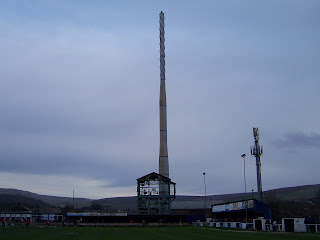 Stewart and Lloyds are hit by wave after wave of attacks. The chances stack up for The Hillmen, who have a shoot on sight policy. A couple of shots fizz over the bar. It’s only the awareness and courage of the red headed Chris Logan that keeps them in the game. He spends the entire first period fire fighting the Glossop attack.

Glossop have incredible energy levels, we hope they don’t burn themselves out for the second half on this heavy surface. 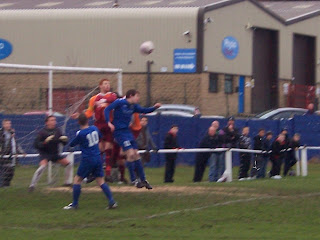 S&L’s goalkeeper Richard Lavin makes an incredible save before the break, somehow turning a point blank volley onto the upright. Glossop will be anxious that they’ve not sewn the game up.

Cheerful news arrives by text: the Tricky Trees are two up, whilst D***y are two down. Nigel, you’ve made your bed, you better lie in it ‘young man.’

There’s no improvement from S&L as The Hillmen continue to pour forward. Steve Young is the Glossop coach, we have stood next to his dugout in the second half and analyse his behaviour.. Despite the numerous chances wasted he remains calm and positive, always encouraging his players, draping his arms around the waist of the substitutes going on, to gain their attention and deliver instructions. 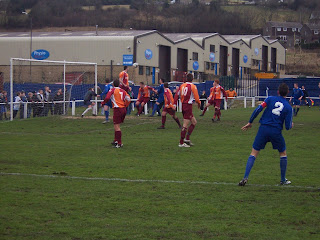 S&L substitute Edward Matthews wastes a golden chance, but redeems himself moments later, producing a stinging shot which 17 year old Glossop ‘keeper Ashlea Gotham can only help into the net.

Glossop come fighting back. They hit the post. Morris, Bailey and Hodges all see efforts fly past the post. Steve Young encourages his youngsters to play a short passing game to tire out their opponents.

Extra time is moments away; Mrs P will never believe me. I’ll be sleeping in the rabbit hutch with Finley tonight. It’ll be gone 8pm by the time I get home. 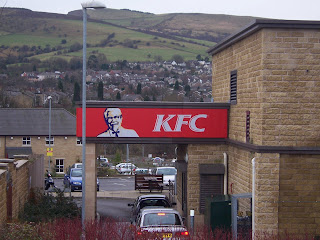 Glossop win a corner in the 92nd minute. The manager’s son Dave Young whips the ball in, it’s inch perfect and met by the forehead of Dave Hodges, it canons into the roof of the net. Hodges has saved my marriage. There’s pandemonium and delirium. Everyone runs to the bench, there’s a massive pile on. People are in tears. Inflatables are thrown into the air. The Auctioneer and I raise our clenched fists with joy. I wouldn’t have missed this moment for the world. What an exceptional bunch of honest players this club has, led by an inspirational manager.

The final whistle is blown. The kids race onto the pitch to cheer their heroes off. What an amazing day out. All for a fiver.

Man of the Match: The whole of Glossop

Footnote: That clown, The Auctioneer, took me back home up the A57 and through Sheffield, where he reminisced about his university days during the rush hour traffic. There was a crash on the motorway. I walked through our front door at 8pm. Mrs P had a face like thunder. It was chilli for dinner and a chilly atmosphere in the lounge. The night ended abruptly when I refused to watch Family Fortunes.
Posted by Sticky at 6:38 PM

Marvellous write-up - if Mossley hadn't been at home - we'd have finally met (although you weren't at Calverton Miners Welfare back in September - my only Glossop FA Vase game this season)!!!

Cheers Smiffy. Hope you are well mate. Will be back up the north west soon so will keep in touch.

May well be at Ilson this coming Saturday believe it or not !!

May well be at Ilson this coming Saturday believe it or not !!

A fantastic report of the day and the game,thank you. To read a report from a nuetral who was so immersed in the game and the atmosphere that he had fists raised at the final whistle, is a true testament to the club and the team.
Come and see us again soon, you will be more than welcome.

No wonder you were up early doors on Sunday morning doing your blog...........Mrs P made you sleep on the couch eh ?

I know someone else who will be sleeping on the couch, should he indulge himself in the 'rites of Trumpy' on Jan 31st!

"Reaps".....Mrs D knows the score with Trumpy, she's known him long enough to know what he's like !!!

Architect, it's Trumpys drinking partner on the day who will be faced with the rolling pin!!!

Sticky, a great report which (I hope you don't mind) i've linked to from my FA Vase blog. It ties in nicely with my journey this season as I was at the Bitton v Cogenhoe game last Saturday and will therefore get to see Glossop (my place of birth) at Bitton on 7th February. Love the site, nice one!

i've read a few times, but find it ironic how when i read this one it's about my brothers team, s&l. haha.