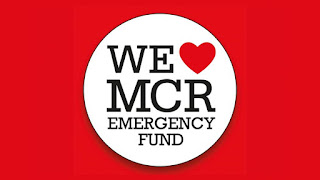 It's Tuesday May 23rd and just after dawn. I'm woken from a deep sleep by Ms Moon who has just come out of the bathroom: "Babe, something awful has happened in Manchester, I thought you'd want to know." I sit bolt upright in bed and press the BBC News app. I'm updated on the sickening atrocity that has taken place in the foyer of the Manchester Arena. A terrorist has detonated a shrapnel-laden bomb as parents and children exit the arena. 22 are dead, 119 injured - 23 critically.

Like most people, I'm barely able to function at work, as I think about the poor folk involved and the loss and maiming of their family and friends. Fundraising is immediately set up, but I'm at a loss at how I can help. Manchester is a city that both Ms Moon and I are very fond of.

I know a guy called Roberto Pietraforte. He is a big cheese, with legendary status to match Robin Hood on the local football scene. He has managed more clubs than Gary Megson. If you scroll down his Wikipedia page with your mouse looking at the clubs he's been involved with, your index finger will get repetitive strain injury (only joking Roberto). What I love about the guy is that he's never been in it for the success, kudos and win at all costs mentality of some I could mention. He just loves the beautiful game and mentoring folk who haven't had the easiest start in life. 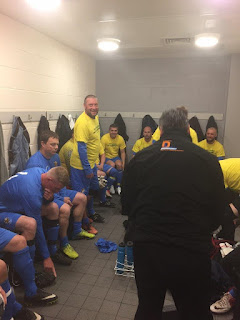 Roberto's AC Wollaton Facebook charity page has caught my attention. For some time now his teams have raised money for kids with cancer. People pay for the right to wear the shirt of his team. The Italian Stallion announces he's going to raise money for the victims of the Manchester Bombing. Count me in pal.

It's Friday evening and to be honest folks I'm flagging. I stayed up the previous night until after 3am watching the General Election results. Mrs O'May is going cap in hand to the DUP in Northern Ireland to form a coalition - with rumours she'll be attending the World Cup qualifier away to Azerbaijan. I'm still stewing that Mansfield have voted Conservatives in - the mining families have very short memories in that neck of the woods.

I meet Ms Moon in a Wetherspoons professional drinking environment next to Notts cricket ground, called the Trent Bridge Inn. We have a swift pint, before I cross the river into The Embankment beer garden for a quick scoop or two. It's lights out at 10pm as I'm fagged out from the night before. 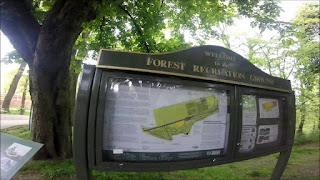 Ms Moon is off to the Cotswolds for the weekend for a family get together and to watch her sister play cello in a quartet. Sticky Palms is champing at the bit for a full-on day. It's bloody mayhem where we live, close to Nottingham Racecourse - the Detonate Festival is on. A couple of years ago at the fag end of the festival, I was at a cashpoint on Daleside Road where I found a youth dressed up as a banana splayed out on the garage forecourt. He was that sozzled that he couldn't stand up, and kept slipping on his banana skin.

I'm driving up to Copper on Mapperley Tops for breakfast. I get stuck behind a Honda Civic with a Chesterfield scarf draped across the rear window. The private number plate is MO55 E. It's in honour of prolific ex Spireites striker Ernie Moss, who sadly now is suffering from Pick's Disease, a rare form of dementia, possibly caused by heading a football repeatedly. 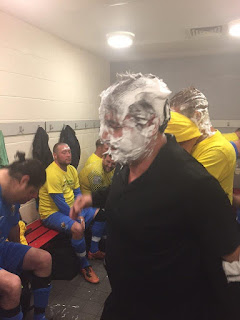 I wolf down a full English accompanied with a pot of lemon tea. I clock Liverpool youth footballer, 16-year-old Jack Bearne, having some breakfast with his mum. He recently signed for Liverpool from Notts County for £150,000, plus add-ons.

Roberto is Italian bred so he's bound to have lined-up some ice cream vans and some wood-fired pizzas for the lads. He'll be sporting a sharp, slim-fit Armani suit that he can prowl the touchline in. 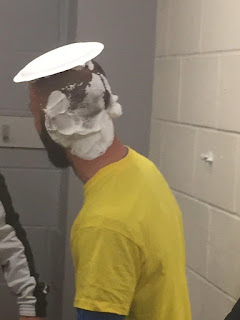 I make the short trip across town to the Forest Recreation Ground on Gregory Boulevard. I stumble across joint managers Roberto and Ian Lowe poring over team selection scribbled out on some fish and chip paper on a car bonnet - blimey Charlie, they're taking it seriously.

I'd expected Cambridge to have arrived by boat and jumped on a tram. Disappointingly they've rocked up in a minibus. Rumours are quashed that Dion Dublin is in the visitors' line-up. They do cough up that a former Cameroon international is in their ranks. It's no problem if it's Roger Milla, as he's definitely over 35 years old. 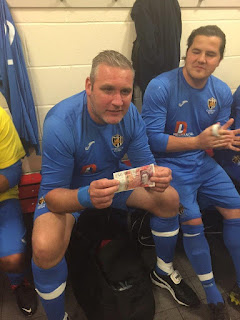 There's an unexpected invitation for Sticky Palms into the inner sanctum of the home dressing room. Roberto has an initiation ceremony for the new boys. They belt out the Madness classic 'It Must Be Love.' I have to pick the two worst singers. The lads are egging me on to pick 'Lenchy' - his mate 'Mushy' isn't much better either. They end up with a game of 'Play Your Cards Right' which concludes with most folk getting pied with shaving foam, with poor old Roberto bearing the brunt of it. It reminds me of Tiswas.

Roberto delivers a powerful, passionate emotional and misty-eyed speech, despite being lathered in shaving foam. I tell you something, had it been Roberto in the dressing room at half-time in Japan 2002 and not Sven, when England played 10 man Brazil, I reckon we'd have gone on to win the game 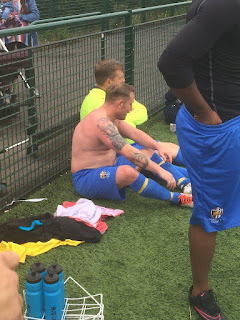 'Wingy' stands up and says on behalf on the lads that Roberto should take pride and recognition for his continuous efforts in raising monies for the less fortunate. I can see one or two of the lads welling up. It's a moving moment for all of us in the room. Well done 'Wingy.' The boys worship Roberto, who's too selfless to realise this. They hang on to his every word.

'Micky Flanagan' (Rocky) is in the AC team. I'm gutted that he doesn't do a short stand-up routine to settle the boys' nerves down. Some of the donations by the lads warm the cockles of your heart. Carl Regan chucks in £50 and two free MOT's for the man of the match. A guy who runs a pub on Mapperley Tops hands over £350 raised by his customers. The boys pass over £20 notes, Roberto asks them if they want £10 back, every single one of them, to a man, declines. 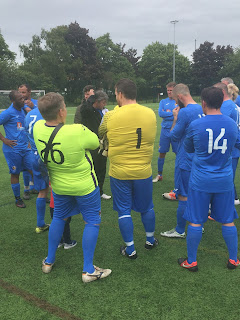 I've totally forgotten that I've a football match to write about, as the pre-match amble has taken over events. Referee Jevon Swinscoe has kindly given his services for free. The lads on both sides don't give him an ounce of bother.

I'm not going to describe each goal in detail, because if I'm honest I'm chinwagging too much. Radford 'Director of Football' Big Glenn Russell has chucked money in the pot. He wants to discuss all the new players he's signed on. I tell him I haven't got two hours free - he's filled out more registration forms than Barry Fry.

John Manders looks lively up top for AC. I used to rate him when he played for Radford. A sun-tanned Carter and bearded Vipond boss the midfield, whilst the 'Clifton Colossus' David Hawkes has a cigar on in the centre of a back three. AC have a stranglehold on the game as the goals begin to flow. Manders, McDermott (not Terry) have bagged a few already. 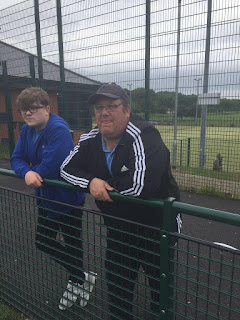 Cambridge are still on the 'team boat' as AC charity swarm all over them. They sneak on a paperboy in the second game, who helps himself to a hat-trick. It would have been more had it not been for some smart low-down saves from 'Big Sam Ralph.'

The goal of the game is in the second match, with Cambridge blowing out their asses. 'Wingy' is a bag of tricks down the left-hand side, he delivers a pearler of a cross with the sweetest of left foots, which is headed home by Manders (I think ?). Roberto strips off and comes on in a cameo role for the final five minutes, showing a few flicks and tricks down the left wing 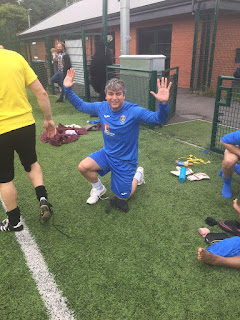 I've been tasked with looking after the charity money. I've got close-on a 'Grand' in my pocket. I decide to walk down Gregory Boulevard to the Grosvenor for post-match drinks and a chip butty. Hell's teeth, it's a bit tasty around here, I'm ripe for picking.

It's a relief to reach the pub. Roberto's pleased to see me as he thought I'd done an Arthur Fowler and waltzed off with all the lolly.. If this guy doesn't win BBC Unsung Hero for Nottingham later in the year, then I'll eat my Spanish hat.

Man of the Match: Roberto
Posted by Sticky at 7:02 PM No comments: