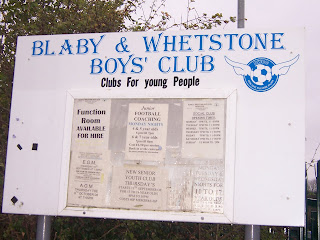 It’s Sunday November 8th. The Groundhopper has got his scouting hat on today. He’s at Melbourne Park, Aspley, in Nottingham. I’ve come to watch an all Asian team. I’m sat on a park bench chatting to a few of their parents. Both teams are warming up when all hell breaks loose.

Some moron, with a limp, lets his Staffordshire bull terrier of its lead. The beast runs amok. He’s biting some of the boys who are screaming with fear. A couple of them hang on the crossbar to avoid a foaming at the mouth canine creature. The parents I was speaking to have also scarpered. 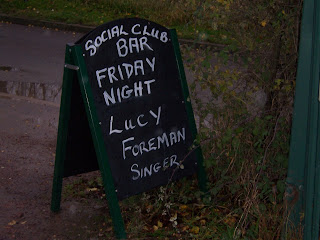 It was a distressing moment to see all the kids trembling like that. We have a bit of a laugh about it once the offender and his owner had been frog marched off the premises. Someone quips that they are not surprised that the dog’s owner has a limp.

Everyone crowds around the TV set in the evening. The X Factor has reached a crescendo. Ten million eyes fall on smug Simon Cowell. Even Sticky Palms is torn away from the Non League Paper. Cowell has the chance to put the nation out of its misery.

I can still hear Mrs P’s cry of despair. She’s had a couple of Chardonnay’s. She shrieks at host Dermot O’Leary, as he announces that those pair of Emerald Islanders (Jedward) has survived the public vote. I haven’t the heart to tell her it’s all a fix. 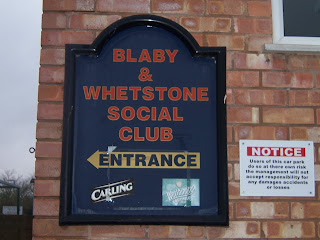 I have a very quiet week by my standards. I’m down the training ground on Monday. I sample a few real ales the next three nights, while I ferry my boys to football training. Star Bitter from the Belvoir Brewery is the pick of the bunch at the Plough Inn, in the affluent village of Wysall.

It’s Saturday morning and old Sticky Palms is feeling as rough as a badgers arse. It was like a who’s who of blog legends up the Salutation Inn last night. I was with: The Architect, Chopper Harris, Barthez, The Nuclear Scientist, The Canadian, White Van Man and Jacko. I was on Guinness and despite skipping a round or two still feel decidedly dodgy.

I’ve arranged to meet my boss in the Hemlock Stone car park. We’re heading up to north Notts – I seem to spend half my life up there! 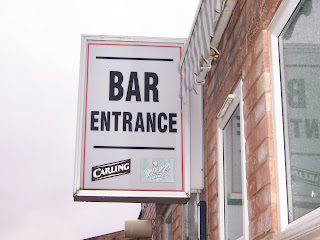 Mick is a real character. He makes me chuckle with his sharp observations and amusing anecdotes. He knows his onions and made over 600 League appearances in goal for Halifax Town, Notts County and Chesterfield.

We briefly visit a ground in Kirkby-in-Ashfield. We’ve been tipped the wink about a centre forward. The boy has an arrogance and swagger about him.

We shoot over to the village of Bagthorpe to watch a junior game. The sloping pitch is situated behind the Dixie’s Arms public house. They are still making breakfast cobs. We don’t miss out on the opportunity. 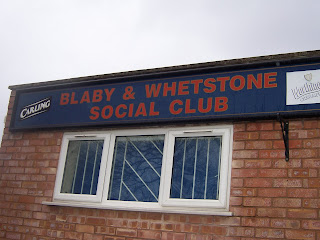 I’m talking to a young goalkeeper after the game. He’s sporting a Lincoln City keepers’ shirt. I tell him that the Imps are the team I support. His dad replies that they were giving the shirts away. Sounds about right.

I finally arrive home at 1pm. Mrs P has took ‘The Skipper’ to his cup game in Newstead village. I’m just locking up when I hear the toot of a horn at the front of the house. For the first time in three years of Groundhopping the White Van Man is giving me a treat. We’re riding in the white van. 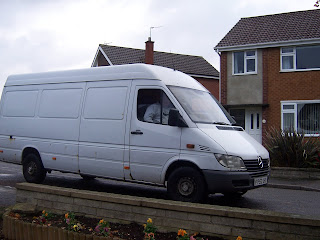 It’s the death ride from hell. Lord only knows what the trip to Middlesbrough’s Riverside Stadium is going to be like next week. His part time job should be as a getaway driver. He smokes off an Asda lorry at the Hobby Horse roundabout and tares up the M1 for a junction.

He’s already had an incident with a Chinese cyclist in Cambridge this week. It certainly hasn’t put him off from white knuckle- riding.

Bruiser phones in. He has a hot date tonight and is cooking dinner. WVM calls him ‘Candle’ – because he’s always being blown out. 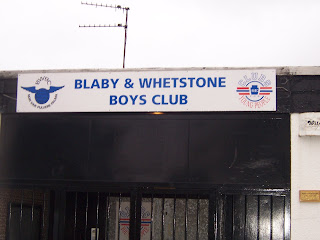 We’re close to the ground but can’t quite find it due to a complicated one way system. An attractive young lady walking a black cocker spaniel dog guides us to the ground. It certainly made WVM feel a little hot under the collar.

It’s £4 entry and £1 for another splendid programme. The pitch looks perfectly playable despite it pelting down with rain for most of the day and night.

We amble past the small stand and rock up to the right of the Blaby dugout, shielded from the gusty conditions by a perimeter fence. 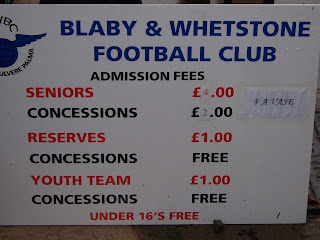 Today’s visitors are Boldmere St Michaels (the Mikes) they are from the Sutton Coldfield area of Birmingham. They ply their trade in the Aspire Midland Alliance at Step 5. On paper it looks to be a comfortable away win.

The Mikes look a class above in the opening twenty minutes. Lee Osbourne has already gone close for the visitors when they take the lead on seven minutes. Ricky Baker hugs the touchline and collects the ball from inside, he beats the full back for pace and clips a ball into Osbourne who spectacularly and skilfully steers a volley into the top right hand corner of the net. 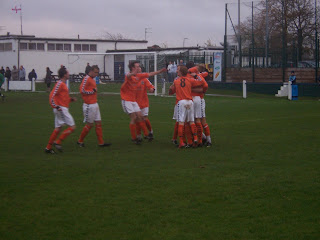 The Groundhopper and White Van Man applaud the goal. It is beautifully executed. We have had our money’s worth already. We don’t do 0-0s readers!

Blaby kick with the wind and take an age to settle, showing their opponents far too much respect. But they begin to find their feet. Their young, athletic 6 & 8 jacket stamp their authority on the game.

They have two glaring misses before the break – one a header by Pallet, the other a shot well saved by Mikes’ ‘keeper Sean Butler. 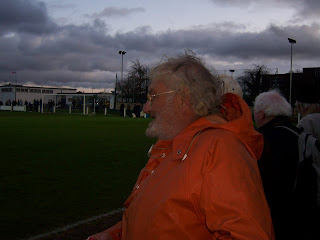 To be honest we’ve lost a little interest in the game, not because of the lack of quality or excitement (it’s a decent game) but because today has thrown up one of those characters that you could only find at a non league ground.

The guy’s name is ‘Dorset John’ or ‘Lord Bath.’ He has a casual acquaintance with a lady in the Midlands and has dropped her off at a few charity shops in Leicester, while he ticks off another ground. He’s from Poole in Dorset.

He wears a bright orange jacket. He reminds me of Uncle Albert off Only Fools and Horses. He has more tales than Hans Christian Anderson. He was assistant kit man at AFC Bournemouth back in the 1990s when Stoke City manager Tony Pulis was in charge of the Cherries. 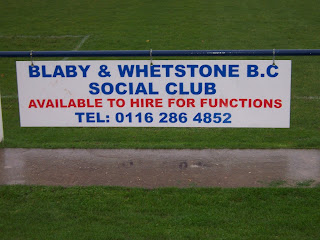 I remind him that Lincoln City beat Bournemouth 9-0 back in 1982. Harry Redknapp was manager at the time. It turns out that John and I were both at the game.

He reels off one anecdote after another and has Sticky Palms and WVM in stitches. We take a breather from the old fella and head towards a chaotic clubhouse. I can hear WVM’s stomach rumbling so treat him to a ham cob and a cup of tea. There’s no rating for the tea as it isn’t poured from the pot.

I glance up at the TV screen. The Pies are drawing 2-2 at Bury’s Gigg Lane. Predictably, Chris Sutton’s Lincoln have failed to trouble the scorers. 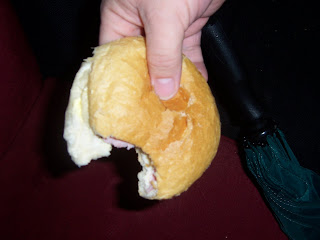 Dorset John must be enjoying our company as he hooks up with us both in the second half. I think WVM may have had enough though as he sticks his i-phone headset into his tabs and checks out a few scores.

I’ve lost all interest for the game now and only have eyes and ears for Dorset John. He’s told endless gags from the Pulis era and has now moved on to when Mel Machin was manager. Apparently Machin was a miserable old sod and John decided to move on to pastures new.

Blaby bust a gut in search of an equaliser. The Mikes’ Jason Holmes had earlier seen a shot deflected over which would have surely clinched the tie. 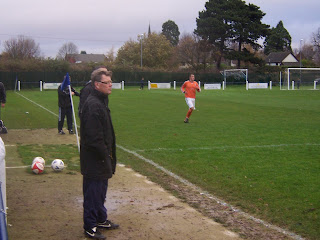 There’s plenty of huff, puff and endeavour but Blaby fail in the final third. It’s been a sterling effort to match a side two leagues above them but they just fall short.

There’s time for one final shaggy dog story from Dorset John. He recalls the time that Chelsea’s Russian international goalkeeper Dmitri Kharine signed a match ball while sitting on the toilet in the away dressing room.

We bid farewell. What a character. The van is revved up and we exit out the car park. WVM flicks on Heart FM, they are playing the 80s hit ‘Midas Touch.’ Where’s Dorset John when you need him?

Man of the Match: Dorset John.