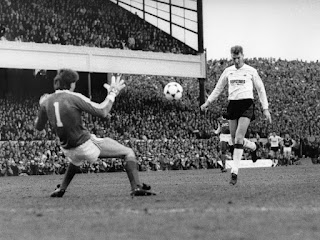 It's Tuesday evening and it's teeming down with rain. There's no footy for Sticky Palms. I pick and choose my midweek games these days. It's not an option if they are on 3G. I'm walking down a snicket off the bottom of Carlton Road. I've just spent a few hours at the Broadway Cinema, located in Hockley; the coolest place in Nottingham. The film was feel-good and called Living. It starred the brilliant Bill Nighy.
I slip through the side door of our joint, and into the sitting room. Ms Moon is crying a river of tears. I stare at the TV screen and see a man sitting in an red bib. It's visiting time at HMP Hotten, close to Emmerdale Farm. I haven't the heart to tell the princess that it's not real life and just a soap opera. "Cain's an innocent man" she cries out. On this rare occasion the 'Hotten Hardman' is not guilty. He's coughed up to the murder of the worst TV actor (Big Al) since Sandy Richardson off Crossroads. To be honest I'd have pulled the trigger if they'd asked me to. 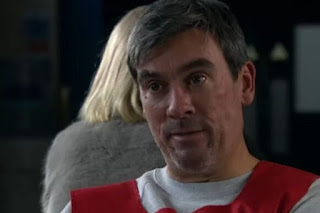 You'd have Cain Dingle in your prison five-a-side team though wouldn't you? He'd put a Graeme Souness GBH type tackle in, if they were playing HMS Strangeways in a War of the Roses prison cup final. You'd be down to four players in the blink of an eye. He'd be on first name terms with the Prison FA. Cain would break Joey Barton's all-time record disciplinary points tally. What a lad, eh?
It's been raining all week. I've had it all on not to get bored. I jump on two buses and head to the south of Nottingham. It's a second attempt to find the grave of former Notts County full-back Pedro Richards, who made 399 appearances for the Pies in the 70s and 80s. I'm fully armed with the whereabouts of his final resting place, thanks to a message from Non League legend 'Upo', who was a friend of Pedro's from back in the day. 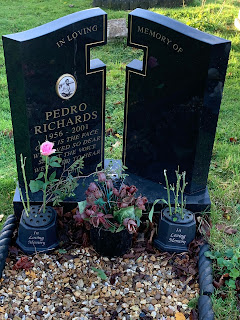 Pedro is laid to rest in the far corner of Wilford Hill Cemetery, behind the chapel. Upo tells a tale from the day of the funeral. A mate of his lived behind the church. He said during the burial "any nearer Pedro and you would have been in my back garden." lol.
It's 5.30pm on Thursday evening. I'm propping up the bar in the Partizan Tavern. It has the best-kept beer in Sneinton and is a recent new entry to the CAMRA guide. I down a pint of cask ale from the Two by Two stable, who are based in Byker, Wallsend, in Newcastle, where Alan Shearer and Ant 'n Dec are from. The owner of the bar is a guy called Tony Perkins, who is a die-hard Notts County fan. He's telling me about his recent trip to Eastleigh where the Pies ran out 2-0 winners. I'm more interested in the pubs and microbars he ticked off in Southampton city centre after the game. 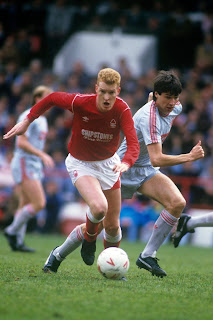 I bid farewell to Tony and head across Sneinton Market ('the New Covent Garden') and into town. There are already a few tanked-up folk walking out of the ghastly Christmas market and fair the City Council have set up in the Market Square. We're in a recession and a cost of living crisis, and yet parents are being pressurised by their children to pay extortionate prices for fairground rides and overpriced hot dogs.
I head down Friar Lane and finally walk through the front doors of The Southbank sports bar after twenty questions by the guy on the door. "No mate, I haven't got a ticket. but a pal inside has." I'm with Craig Farina and Matt Dring for a 'Curry and Rice (Brian) Night' which is being hosted by BBC Radio Nottingham's sports commentator Colin Fray. It's a no show from the busiest man in Nottingham and 'friend to the stars', Jitz Jani. Apparently he's autograph-hunting in the swanky Six Richmond House cocktail bar up on Hurts Yard. 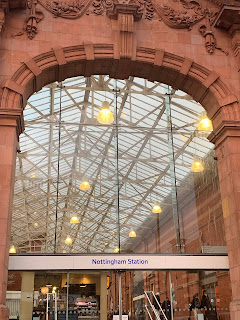 Former Hibernian and Nottingham Forest left winger Brian Rice is guest of the evening. He is doing a Q and A with Colin on stage. He's an engaging and honest sort of guy, who admits that maybe he didn't fulfil his potential at The City Ground. The curry is provided by an executive chef from Bombay Bridgford on Radcliffe Road, in West Bridgford. The lamb curry is delicious and mouth-watering. Rice shares a few funny Brian Clough anecdotes that I've not heard before. The curry is washed down with Jute craft ale from the Salt Brewery, in West Yorkshire.
I'm back in town myself on Friday evening, having a few sherberts with Tony Mac. I negotiated a pass out with Ms Moon as I've been a good lad and have prepared a curry in the slow cooker. I'm back home by 7.45pm and I remain in good books for the rest of the evening. 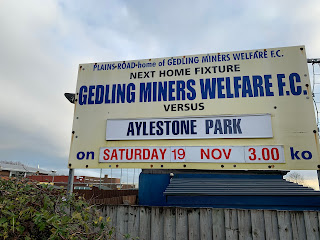 Tomorrow (Sunday) is a massive day in our house. It's my debut making brisket in the slow cooker - talk about pressure, eh? I've been fully briefed by the Big Man on cooking instructions. All me and him talk about these days are air fryers and slow cookers. Ms Moon bags a 1kg brisket from Netherfield Morrisons; it's not cheap either folks. The original plan was to hook up with Upo and go to watch Stapleford FC v AFC Dunkirk. The rain has scuppered any chance of that. The game has moved to a 3G pitch in the Tory stronghold of Rushcliffe.
There's an opportunity of watching Lincoln City v Morecambe at Sincil Bank, but a United Counties League Division One game has caught my eye, that is being played only a few miles up the road. League leaders Aylestone Park and their pocket-bursting big budget are up at Gedling Miners' Welfare. Ms Moon is chillaxing on the sofa watching Location Location Location. I can't bear that bloody toff, Kirstie Allsop, whose father is the 6th Baron of Hindlip. What's even more staggering is she named her two children Oscar Hercules and Bay Atlas. If I ever catch that family in YOLK cafe in Hockley I will march them out of the premises. 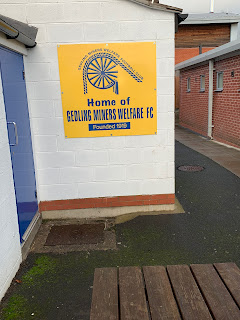 I sit in my bedroom listening to Paul Gambacinni's Pick of the Pops. Jimmy Somerville and June Miles-Kingston are up 13x places to number 20, in the 1989 charts, with the 'Comment Te Dire Adieu (It Hurts to say Goodbye) . I find it hard to decipher the Scottish accent, never mind a Scot singing in French. In between the dross there are some good tunes from Stone Roses and Rochdale's finest Lisa Stansfield. I confessed to Ms Moon, a while back, after a couple of strong craft ales, that I had a thing for Stansfield and her mole. She didn't speak to me for the rest of the evening.
We park up at the Nuffield Health Gym on Mapperley Tops. It's £5 each on entry and £2 for a couple of raffle tickets. Aylestone Park are 3-0 up by the break. The game looks dead and buried. I catch up with Notts Non League legend, Chris Marks, in the clubhouse at the break, and introduce him to Ms Moon. 'Marksy' was a brilliant manager and a good servant to Gedling MW, West Bridgford and Wollaton FC. 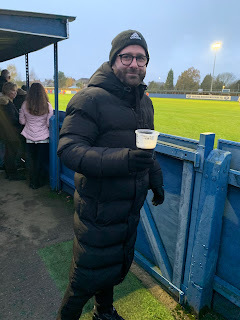 He's attending a 50th anniversary of Gedling Southbank FC this evening, where he volunteers as a coach. The event is taking place at the Robin Hood Suite at The City Ground. Martin O'Neill is the guest speaker. If I was the chairman at any local club I'd have 'Marksy' in as manager without hesitation.
There is an extraordinary incident in the 65th minute and a breach of groundhopping protocol. Ms Moon ups sticks and announces to all and sundry that she's off home to toast her feet because it's freezing cold. The Groundhopping Gestapo will be sitting in the morning as she awaits her fate, which will be much like Blackadder's was, when he shot dead General Melchett's favourite carrier pigeon. 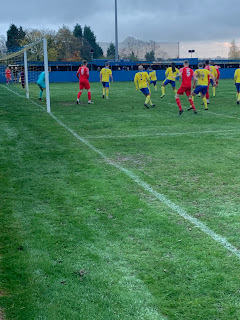 The game livens up when the Miners score twice in two minutes. Aylestone look rattled. A ball is played into the channel to the lively Jack Jepson. An elbow is raised and Jepson falls to the floor. There's no flag from the assistant, who is stood a few yards away. The game isn't stopped for a head injury. Aylestone scurry up the field to put the final nail in the coffin. The officials are surrounded but the decision stands.
Two further goals are scored, but by then Gedling are deflated and have thrown the towel in. The officials get dog's abuse at the final whistle. It's not helped that they laugh it off. I've a drunken, thick-as-a-brick oik, from Leicester, stood next to me. I suggest to him that they have got away with one. It's met with a torrent of abuse. I can't help myself when I ask him how many times they've lost to Radford this season. It's twice by the way. I can't 'arf pick 'em.

Man of the Match: Marksy

Another good blog Sticky.
Martin O Neil was excellent and a special shout-out to Gedling Southbank as an amateur club being 50 years old in this day and age isn’t an easy fete so Congratulations especially to the volunteers behind the scenes.