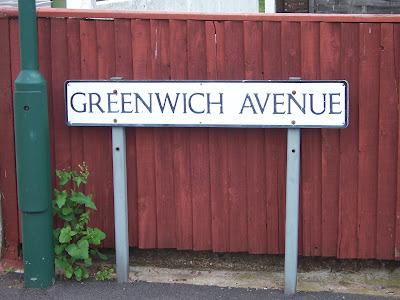 He’s my best friend. We speak first thing in the morning and last thing at night. We go for walks together. I’ve known him for three years. We are inseparable. But now our relationship is in tatters. It’s all my fault. How could I forget his birthday? I stroll down to his crib with a peace offering in my hand. He’s not interested. He’s turns his back on me. Shuns me. I dangle the carrot. I’m sorry Finley. It won’t happen again my furry little friend. Happy belated third birthday son.

American singer Chris Brown has been given a community service order for beating up his former girlrfriend, Rihanna. What I can’t work out is why she didn’t fend him off with her ’Umbrella ....ella, ella, eh, eh, eh.’

Kids’ football is back. ‘The Skipper’ and Sticky junior are well into their pre-season schedule. Junior bagged a goal at Bingham Town, whilst ‘The Skipper’ had a steady debut for Clifton All-Whites, during a 6-0 romp. 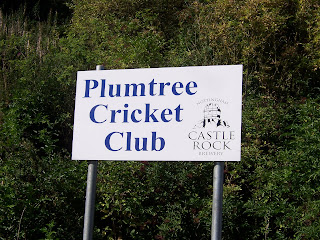 It’s Friday. I’ve took the day off work to mind the kids. On Bank Holiday Monday it’s the annual Twenty20 cricket match up on our local recreation ground. We decide to go for a net at Plumtree Cricket Club, where both the boys play. I haven’t turned my arm in over a year. I’m comfortably the worst batsman in the history of the South Notts Village League.

I shoot down Meadow Lane in the afternoon. I need to collect some new balls that I promised a club in Nottingham last week. Portugal under 17s are beating Italy under 17s 2-0, in a friendly match.
Saturday morning follows a similar pattern to the previous week. At the crack of dawn I’m on the World Wide Web researching the inner city area of Nottingham called Basford, and its local football club. 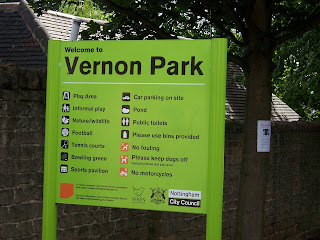 I’m browsing through their website when I stumble upon an incredibly sad piece of news. The son of one of the players has an incurable disease. They have set up a trust fund for this brave little boy. Sticky Palms wants to help. No, sorry, has to help. I phone my boss at Notts County. I give him the details of a Basford United club official, for him to get in touch with. Even if we can just get a signed match ball and auction it off, surely it can help raise important funds.

The story has touched me and saddened me. It’s made me appreciate my two boys and their good health. I’m delighted when ‘The Skipper’ says he’s coming groundhopping to Greenwich Avenue this afternoon. 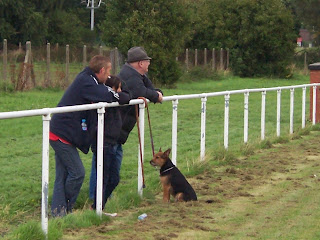 I go for a cruise around Nottingham, searching for talent. There’s not much doing though. I watch a couple of games but nothing takes my fancy. I drop into the inner city and deliver the new footballs to a delighted chairman. We share a cup of coffee and put the world to rights.

I’m walking back to the car. A group of boys are playing a small-sided game on an all weather surface. There’s a host of different nationalities. There are Poles, English, Jamaicans and Africans. One of them is a cut above the rest. I grab him and ask him how old he is. He is Nigerian. He is quality. It’s a good morning’s work.

I have a ham and Emmental cheese baguette for lunch. The three of us play cricket in the back garden. Mrs P is preparing a three course dinner. The Taxman and his wife are due round tonight. 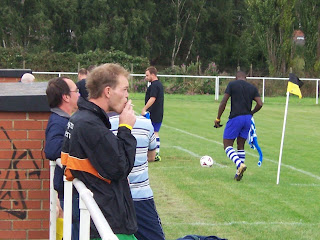 Sticky junior is off to watch Notts v Worcestershire in the Pro40 at Trent Bridge. King Billy’s Tricky Trees are 3-0 up against staunch rivals D***y County. We’ve live commentary on in the car. The Sheep pull one back and then another. Sticky junior swears .... And so do I. Please God don’t let this happen again.

White Van Man has been ‘on it’ since 9am. His posse met up in the Monkey Tree, in West Bridgford. His full English will have been washed down with lashings of alcopops.

We drop Junior right outside the ground, just in case there are any stray sheep roaming about. The Rozzers are on every street corner. I hope my brother- in- law isn’t working, as he’s a Ram and a police officer. He’ll definitely want to feel some Tricky Tree collars. 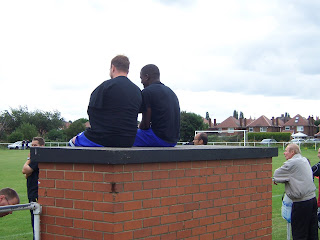 Plod have blocked off the Embankment. I have to drive through the old Meadows. It’s like a time warp. I get myself in a right old pickle. I seem to be going round in circles. Sat Nav is at home. Ooh eck.

Finally, after what seems an age, we end up on the ring road. We drive past the old Commodore nightclub and hang a right onto Stockhill Lane. We pull into Greenwich Avenue just as referee Martin Atkinson blows for time at The City Ground.

Nathan Tyson auditions for his role as Great Britain’s flag bearer for the 2012 London Olympics, by waving the corner flag at the Bridgford Upper Tier. Bleating Sheep in the Lower Tier are not amused. They have short memories. Robbie Savage wound us all up last season, twirling his scarf around the air, after a 3-2 win in the FA Cup. 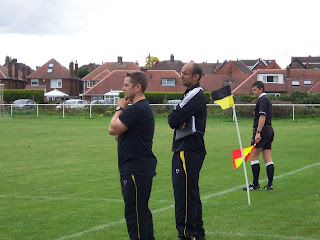 Basford United joint first team manager, Chris Munroe text me earlier and told me to pop up to the changing rooms. Blimey, perhaps he wants me to give the team a pep talk. I’m not going in if they’ve got Chris Brown on the changing room CD player. Anyway, it’s too late; the teams are on their way out.

I saw them play at the fag end of last season at Magdala. There were a few tears and tantrums that day. Any chance of a NSL title was blown out the water with a 1-0 reverse. They were their own worst enemy and should have let their feet, rather than their mouths, do the talking.

Greenwich Avenue is bleak and open to the elements. It stands on the border between Cinderhill and Bulwell. The Club have an 80 year lease on the ground. Plans are in place to erect floodlights, which will be a major boost to the senior and junior teams. 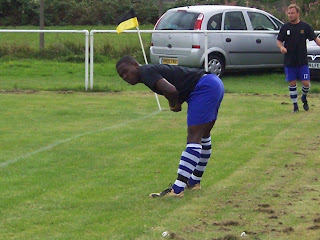 Ground development is moving along swiftly at Greenwich Avenue. The Club recently won an online vote to secure the probation services, to carry out a spruce up of the surrounding area. Sticky, of course, voted for them. They are also hopeful of installing additional hard standing, new floodlights and, most importantly, a new tea bar.

Basford kick down the slope. The game is no great shakes but Walker, Manders and McPherson look dangerous for United. Player of the Season, McPherson, runs with his head down and doesn’t like to pass, but he doesn’t half keep the full back busy.

Newark Flowserve have dropped down to the NSL from the Central Midlands League. The travelling had become a farce. Four players have fled to neighbouring Newark Town. Two more have emigrated to Australia. They’ve recruited from their Academy. They play a pretty passing game but struggle to create in the final third. 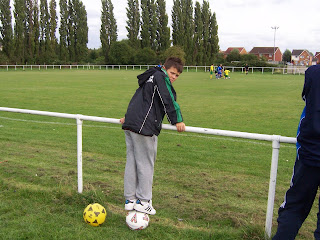 Livewire Basford striker, Kev Walker, is as good as it gets in the NSL. He wriggles like a snake. He hoodwinks the defender, feigning to go one way and accelerating, with a drop of the shoulder, in the opposite direction. He clips the bar.

Basford take the lead. McPherson drives down the right, gets his head up and pulls the ball back for an emerging Bowers, who blasts the ball onto the underside of the crossbar and into the net.

Chris Munroe has kindly asked us upstairs for a cup of tea but I don’t want singling out for any special treatment. I’m sure he’s got better things to do than look after some sad old groundhopper. I play a bit of footy with ‘The Skipper’ instead. 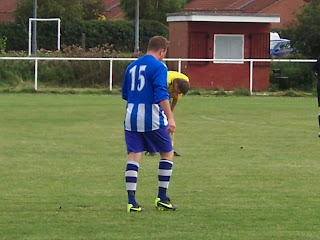 Basford notch it up a gear in the second period. Oakes cajoles and cuddles the ball in the middle of the park. He spreads the play. Manders slide rule pass sets up Walker to scamper away. He rounds the ‘keeper and slides the ball into an empty net. The boy is class. His Achilles heel is his anger management.He foolishly got himself sent off in a pre-season friendly and starts a 35 day ban on Bank Holiday Monday. But Sticky loves him. He just needs an arm around his shoulder now and again.

‘The Skipper’ has enjoyed watching Ben, the Jack Russell, chasing a tennis ball for most of the afternoon. Sadly it ends in tears when he bumps into three Staffordshire Bull Terriers whilst retrieving the ball from the long grass near the fence. You can hear the yelp in Bulwell.

Basford also have the craziest supporter of the season. He is a Greek Cypriot version of Alan Green. He shouts and screams at every pass. But entertains all 31 of us. 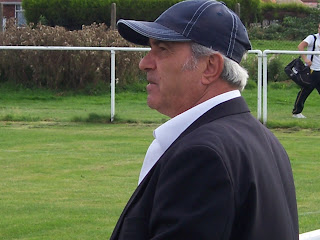 Flowserve beat the offside trap and reduce the deficit with a left foot finish from Sharp.

Basford send on Will Heath as their substitute. He’s put some timber on since I last watched him but his feet are fantastic. He wins a corner, which is expertly curled into the near post by Richard Oakes. Heath nods home. It’s game, set and match to Basford.

Hi Nick just had a catch up on your blog always a good read,if I had known you were in
Newark would have droped down to see you.Hope the Mrs P and the boys are well. Wayne

Where is the report groundhopper ?

What do you mean i have put some timber on?

Drop me bacon sandwich! Cruising round Notts looking for talent? Is Mrs P aware of your movements?

Get yourself to Gigg Lane, plenty of talent in Bury last week !

More than enough talent on show in the northern town! However the world famous market - voted the best in Britain, leaves a little to be desired!

I fear that you even have to be owned by a multi million pound investment consortium to stay a float in Division 4 these days!

Will!!! What he is saying is that you have got fat mate!! ring me if you need anymore help with this report! im here all day!!!