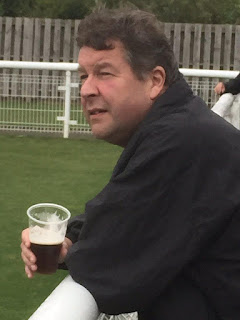 It's Saturday tea-time and we're guzzling alcoholic beverages in the courtyard of the Old George Inn in a sun-soaked Newcastle city centre. There's a huge cheer, bedlam breaks out, as the Magpies hammer home the final nail in Brighton Hove Albion's coffin. The Seagulls fans will have chuff all to cheer about on their 350 mile, miserable trip home.

We partake in more scoops at the Crown Posada. It's a snug Victorian pub, that has an old record player belting out hits from the 60s, on a 33 RPM long playing record. Sticky 'n Murphy's favourite funk 'n soul band, Smoove and Turrell, have named their latest album after the pub. Sunday is spent down the Quayside, frequenting a few old school classic boozers. The Hop-on Hop-off Bus Tour is money well spent. The architecture in the city is jaw-droppingly beautiful. 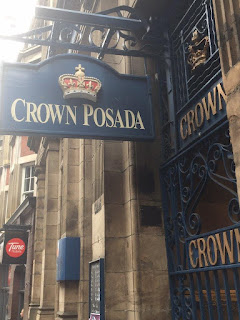 We're back in Nottingham for Monday lunchtime. I type a few notes up from the Whitley Bay game before dashing out the door and heading up Radford Road, in inner-city Nottingham, for an East Midlands Counties League clash between Radford FC and Kimberley MW. I usually stick the car in Asda car park for a two hour slot, but I clock Inspector Blakey  patrolling the joint, taking down car registrations details in his dog-eared notebook. I squeeze the 'Rolls Royce' into a tight spot on Selhurst Street. I kop for some flak from Big Glenn Russell, the Pheasants manager. He threatens to have me chucked out if they lose again  .... I'm a bit of a Jonah. They lose 4-3 in comfortably the best game of the season. See you next year, Glenn.

Tuesday and Wednesday are spent in the south east of England at Gravesend and Horsham. It's a relief to return home after a ghastly two days on the M25 and M23, although it was a pleasure to hear Alex Hales break England's highest One Day record individual score, smashing Pakistan for 171 runs. It's a slap in the face to all his critics. 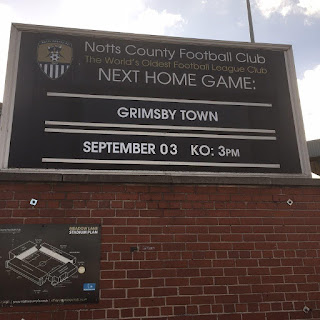 Skies are clearing and the sun is shining as I slog it up Daleside Rd, before taking a left hand turn, passing the Cattle Market and up Meadow Lane towards Notts County's ground. The Codheads, from Grimsby, are in town tomorrow, with their Harry Haddock inflatables. It should boost the flagging attendances at the club.

I love the back garden at Castle Rock's Embankment pub. It's situated on the edge of the Meadows estate. Slums were demolished here in the 1970s and replaced with an ugly, architectural disaster. The folk are proper though and pack out this popular, patioed beer garden. I slurp a couple of strong craft ales from the Three Blind Mice brewery in Ely, Cambridgeshire, before returning to Colwick and giving Ms Moon a good gubbing at Pointless. 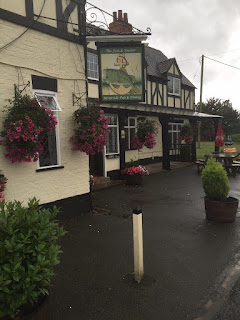 I enjoy a lie-in on Saturday morning. There's literally time for a bowl of porridge and cup of strong coffee before heading over to the village of Keyworth, to pick up the legend Trumpy Bolton. Murphy the budgie will be chuffed to bits that Brian Matthew is back on song on Radio 2 this morning, after his disappointing set last week - he'll be whistling his wee head off to 'Behind the Painted Smile' by The Isley Brothers.

I caught Murphy furiously pecking away at my phone the other day. His beak was like a pneumatic drill. I thought he was going to shatter the glass. It was only when I glanced at the phone, did I realise that Murph had spotted a tweet saying that Olly Murs  is 'singing' at the Nottingham Arena next March. I can see my feathered friend flying up there on the night of the gig and pecking all the lighting cables to plunge the place into darkness - Murs and Murph have previous. 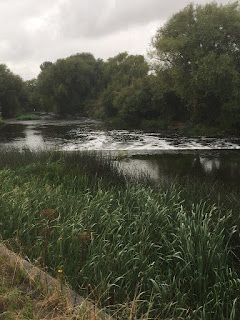 I arrive at 'Trumpy Towers' a tad early. The Legend sticks his head out of the bathroom window - "I'll be two minutes chap" - as he unscrews the top off his bottle of Old Spice, before dabbing it on the front and back of his neck. He's already polished off a bottle of Hopping Hare and some cheese on toast for breakfast.

He's disgusted to see my 'man bag' in the footwell of the passenger seat. He slings it into the back of the car. We both start singing 'Getting Away With It' by Electronic as it blasts out of the car radio. Trumpy is comedy gold. I often bring a spare pair of batteries for my dictaphone, as the anecdotes are endless. I hear tales of wild weekends in Glasgow watching Leicester City versus Celtic in some God awful tournament. Mr and Mrs Bolton have just returned from a week in the west of Scotland and a few nights in the Scottish Borders. He confesses to have ticked-off 90 new pubs - I nearly crash the car. 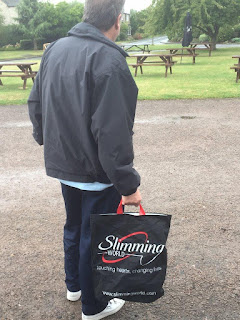 Bolton is in a jovial mood having recently won Employee of the Month. He swigs away at a litre bottle of cider stored in a Slimming World carrier bag, that looks like a Witches Brew of out of date scrumpy.

We pull into the Fish and Anchor dining restaurant, in Offenham, which is set in a beautiful riverside location. Trumpy downs a pint of UBU Purity, as we get chatting to the landlord, who's originally from Warrington. A large group of Chinese people rock up on a boat and order up a big buffet. It's like a scene from Father Ted. 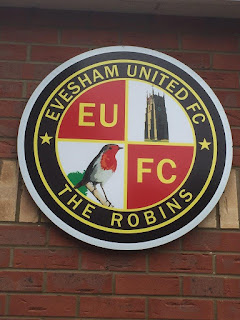 Next stop is the Ivy Inn in North Littleton. It was only two weeks ago that I was here with Rugby Town assistant manager John Ramshaw, on a spying mission. The fish 'n chips are to die for, as we both enjoy a pint of Mosaic pale ale from the Adnams Brewery. Again, the landlord is charming. He was once the coach for Stourbridge FC youth team. He tips Trumpy the wink on the Bull and Bladder in Brierley Hill, in Birmingham.

Evesham is a market town in Worcestershire with a population just shy of 25,000. It is situated on a horse shoe shaped peninsula and is renound for its market gardening. Notable people born in the town include ex Liverpool striker John Aldridge, whose unsporting act of ruffling Brian Laws's hair after he had scored an own goal in the FA Cup semi final of 1989 at Old Trafford after the Hillsborough Disaster, sticks in one's craw. Co-founder of Twycross Zoo, Molly Badham, the comedian Alistair McGowan and former soldier and Portsmouth striker Guy Whittingham, who was nicknamed 'Corporal Punishment.' It is also claimed that the American singer P J Proby lives on the outskirts of the town. 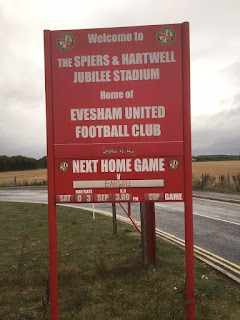 We roll into the car park of the Spiers and Hartwell Jubilee Stadium an hour before kick off. It's £9 on the gate and £2 for the programme. Everybody seems really friendly. Trumpy thinks that all his birthdays have come at once when he hears that Brew XI ale is on at £2 a pint. We have a go on the football card. Trumpy picks Leicester City, bless him.

Trumpy gets a tap on the shoulder, it's his mate 'Rooky' from Hinckley. We stand on the far side, as Barwell win the toss and choose to kick into the howling wind. "It'll be a game of two halves", remarks 'Rooky', "or two pints" says a razor-sharp Bolton. Barwell are nicknamed the Canaries. I wonder if Murphy the budgie will be perched on a crash barrier in the away end ? 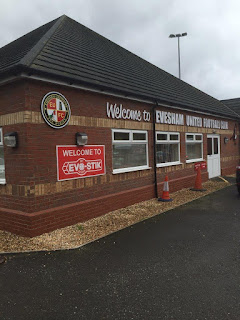 Evesham boss the first half an hour, with the wind at their backs. Barwell's young 'keeper has safe handling and kicks solidly into the wind. Barwell take the lead with their first serious attack. Their winger is clipped, leaving much sought after midfielder, Brad Hickey, to successfully convert the spot kick. It's 2-0 on the stroke of half-time. Hickey plays in Owen Story, who rounds the keeper' ('Brad Guzan') as Trumpy has nicknamed him, before rolling the ball into an empty net.

Trumpy is lining them up in the Bar, panicking that they'll pull the plug on the 'Special Offer' anytime now. I sit with 'Rooky' in the Main Stand as Barwell choose to sit on their 2-0 lead. The players become tetchy, as the tackles fly in. I've the Darby and Joan Club sat behind me. 'Dot Cotton' calls a Barwell player a 'Dirty Bastard' time and time again. I'm crying with laughter. 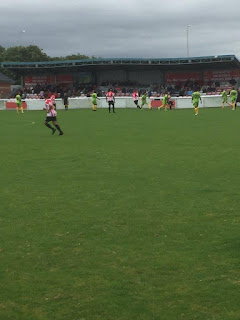 Evesham are never say die, as they throw the kitchen sink at the visitors. Barwell score an own goal, as two visiting WAGS obscure my view. Barwell's Sandhu is dismissed for a deliberate handball and a Fosbury Flop. Evesham pile on the pressure, with wave after wave of attack. They play a beautiful game of football. The deserved equaliser arrives five minutes from time as another cross is turned in. Barwell hang on the ropes after being peppered with shot after shot in the dying embers of the game.

Man of the Match: Trumpy Bolton (of course)