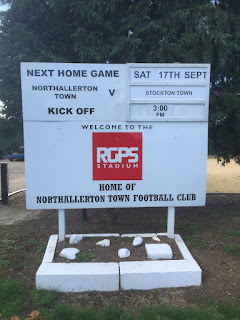 The flat we're staying at in Whitby is on the West Cliff. It looks out onto the beach and North Sea. Today, Wednesday, it's shrouded in mist - an absolute pea-souper of a fog. I check the BBC weather app for the inland market town of Beverley. The forecast is for clear blue skies and wall to wall sunshine.

We toast some slices of fruit loaf and smother them in butter, before heading over to East Riding of Yorkshire. Sat Nav takes us on a cross country route through small towns such as Driffield, before pitching up in the picturesque town of Beverley. There's 'Bob Hope' of a parking spot in the Market Square, so Ms Moon sticks the Audi in a Tesco car park.

I place a couple of bets at Beverley races on the first and last race at a local Coral bookies. We sit on benches in the Square, eating fresh cobs purchased from Thomas The Baker on Toll Gavel. The racecourse is only a five minute drive away. It's £14 each on the gate. I snap up a racecard, we may need some help, as the form book is thrown out the window. A majority of the races are for two and three year olds.

I used to enjoy a flutter in my teens - Cheltenham and York were my usual haunts. I've been way off the pace for years. My advice to Ms Moon is to stick a pin in the newspaper. It's advice I should have taken myself, as a 66/1 winner sees off an odds on favourite in the opening race. 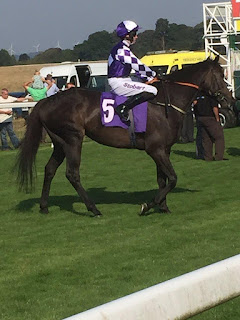 I spend the entire afternoon sprawled out on the grass, plastered in Factor 50 suncream. Ms Moon places more bets than Paul Merson. She brings the bacon home with a 66/1 third place and a 25/1 second place. Her namesake, Savannah Moon, nicks second place by a short head, at 28/1, to ensure a decent return on our bets. We celebrate with a fish stew at the Magpie Cafe in Whitby. I experience a bigger sneezing fit than Trumpy Bolton, when he mixes real ale with cider - I put it down to a reaction from the grass.

The mist returns on Thursday, ruining a whistle-stop tour of Robin Hood's Bay and Runswick Bay. We pack up on Friday and head across the North Yorkshire Moors. We break for lunch at Helmsley in Ryedale. Ms Moon spits her dummy as the waitress at the Feathers Hotel mucks up her order.

We arrive at the Forresters Arms in Kilburn for the night, on the final leg of our tour. I spot a two mile circular walk in a welcoming pack in our room. As we walk out the village we can see the cut out figure of the White Horse in the hillside. 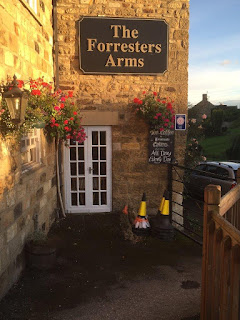 I sink three pints of 'Striding the Riding' from the Helmsley Brewing Company. The evening meal is spot on. There are some Trivial Pursuit cards on each table. Ms Moon loves a competitive quiz. A huge fry-up is wolfed down in the morning. Sausage, eggs and bacon are locally sourced.

First port of call is the horse-racing market town of Thirsk. Blue plaques are positioned throughout the town. Sticky hasn't done his homework, so is aghast to see that he didn't realise Thomas Lord, the founder of Lord's cricket ground, was born here.

I need to chalk a pub off in Bedale. Ms Moon has a wander - bet her cigarette puffer is bust again. I have a quick pint of Theakston's Lightfoot. I climb the stairs to the loo and chance upon a poor chap stranded and clinging onto the end of the stair rail. I help him to the toilets. Bless him, he had a stroke 15 years ago and is not too mobile. 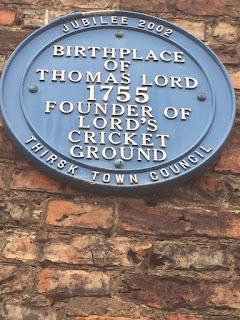 I get gassing to the guy and his wife in the bar. It transpires that his sons have bought him a surprise birthday present. Tomorrow they'll be visiting a raceyard in the area that's owned by one of the best trainers in the country.

We arrive at the Calvert Stadium in good time. Gambacinni on Radio 2 is playing 'Sons and Daughters by Level 42 - to be honest, when you've heard one of their tracks, you've heard them all. Northallerton is a market town in the Hambleton district of North Yorkshire, with a population of 15,000. It has been the County town of North Riding of Yorkshire since 1974. Richmond Foods' HQ is in nearby Leeming Bar. They are Europe's third largest ice cream manufacturer. They make Fab and Rowntree's Fruit Pastilles ice lollies.

Hull City captain, and former Nottingham Forest and Tottenham Hotspur defender, Michael Dawson, was born in the town. All three Dawson brothers were on Forest's books at one time. Dawson initially was a centre forward, but was quickly converted to a centre half under Paul Hart's guidance. We stopped in an hotel in the Algarve over the summer, the whole Hull City squad rocked up - they were as good as gold. 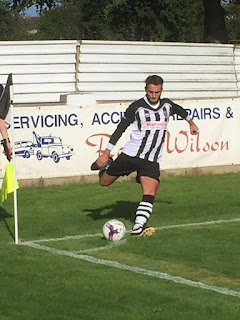 Northallerton Town FC were founded  in 1895 and are the most southern-based team in the Northern League. It's £6 on the gate and £1 for a chunky programme. We dive into a plush clubhouse and shout up chilli, chips and cheese. I notice that Eric Bristow is here for a Q&A and game of darts on November 15th.

The DJ is pumping out Utah Saints, but blots his copybook with Sam Smith and Robbie Williams. We sit on the concrete steps behind the furthest goal, as the ground is three-sided, and there is no access to the dugouts on the far side of the ground.

I don't know what it is, but I've struggled for goals at this level. The visitors are technically better and work harder, but I can't for the life of me see where a goal will come from. The first ten minutes resembles a game of head tennis. I get a touch of the match ball on 14 minutes - it's the highlight of the first half. Ms Moon dashes down the terrace to chase a stray shot down -  who said she was allowed to play ?

The second half isn't much better. Neither 'keeper has chuff all to do, it's got 0-0 written all over it. The referee's blast of the whistle puts us all out of our misery, nice day out, but fairly average game.

Man of the Match: 2 Jacket for Norton