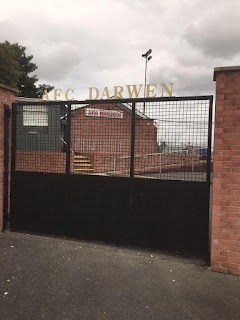 I'm still buzzing from my day out with Trumpy Bolton in Evesham, where we saw a pulsating FA Cup tie, as Ms Moon and I take a wander around Attenborough Nature Reserve. We sit on a wooden bench watching what will probably be the final Sunday League cricket fixture of the season. Lunch is taken at the Victoria Hotel in Beeston, before ticking-off the White Lion in Bramcote.

I wile away a Tuesday evening with The Taxman on the banks of the river Trent, as we watch Dunkirk thump Radcliffe Olympic 5-1. The rest of the week is spent holed-up in the leafy suburb of Holmes Chapel, in Cheshire, at a sales conference. I was hoping to catch Roy Keane walking his dog Trigger, in nearby Hale, but failed, miserably, to leave the hotel grounds during my short stay. 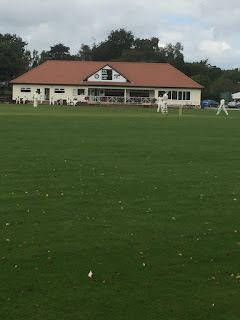 I down tools at lunchtime on Friday, that's me done for the week. Murphy the budgie has been booked in for a week's respite at Auntie Val's hotel in Colwick. I am in bits and so is Murphy. I pack his toys, towel and radio. To be honest Murphy is as thick as two short planks. Auntie Val is trying to educate him by tuning into Radio 4 - I haven't the heart to tell her she's wasting her time with old bird brain.

I nip into Wisdom's Barbers on Mansfield Road, where my Kurdistan friend gives me a short back 'n sides. I tick off the Hop Merchant on Upper Parliament St - it's the artist formerly know as the Turf Tavern. I down a pint of Farmers Blonde from the Bradfield Brewery. I have a spot of tea with my old pal Billy Snooks in The Embankment just off Trent Bridge. 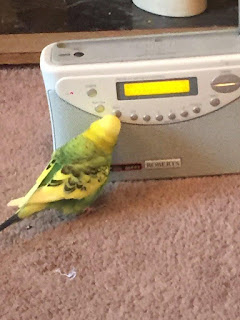 I toss and turn on Friday night - I'm worried sick about Murphy and also excited about our road-trip to Lancashire and North Yorkshire. Auntie Val texts me in the morning to say Murphy's settling in nicely and has been listening to George Gershwin - they'll be none of that tosh when he's back in his yard.

There's a pit-stop at Costa Coffee - Ms Moon tends to see the red mist without a sufficient caffeine intake - before shooting up the A50 and onto the M6. The motorway is a breeze today. We stop for more coffee at Sandbach Services. A large group of suited and booted racegoers are heading up to Haydock Park. I get gassing to a Worcester City fan who is on a supporters' coach to Bradford Park Avenue. We're parked up at the back of Darwen Youth Centre at midday on the nose. We stroll past a memorial garden dedicated to 16 year old Sky Nicol, who tragically died of a drugs overdose in March 2016. 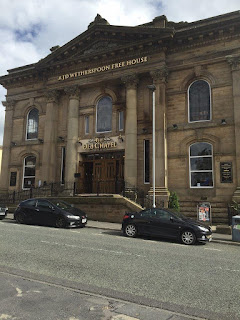 Darwen is a market town in Lancashire with a population of 30,000. It was once the centre for textile-manufacturing during the Industrial Revolution. In 1931 Mahatma Gandhi visited the town to see the effects of India's boycott of cotton goods. Soon after, this led to the decline of the cotton trade in Lancashire. Darwen is also the home to Crown Paints, one of the country's most successful paint manufacturers. Other notes of interest include The Beatles playing the Co-operative Hall in January 1963 and the TV series Hetty Wainthropp Investigates being fimed in the town.

Darwen FC were founded in 1870 and were the world's first football club to pay players professionally. They were a Football League member from 1891-1899. Their 134 year old history ceased to exist in 2009 when they were wound up in the High Court. The golfer Dick Burton was born in Darwen. He won the British Open in 1939 and held the Claret Jug until 1946, due to the competition being suspended because of the Second World War. 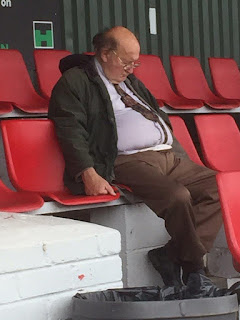 British pub aficionado, Trumpy Bolton, has tipped us the wink on the Old Chapel in the town centre. Wetherspoons have converted this old Methodist church. There is a spectacular, open staircase and balcony seating. Ms Moon has butternut squash soup and we both have a cheese 'n ham toastie. The pint of Shipyard pale ale is a tad flat though.

We have a wander around the town. I notice a pub called The British Queen that is decorated with a Union Jack, that flutters in the breeze. Ms Moon is running low on vapour liquid for her electric ciggie thingy. She's bought the Daddy of vapour, which costs more than 200 Gold Leaf. A search in Darwen for some more proves fruitless. 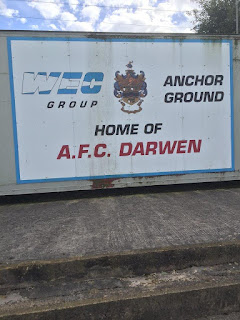 We already clocked the ground on the way in. It still doesn't stop us managing to circumnavigate our way around the whole town, before finally pulling into Anchor Road, the home of AFC Darwen. The town's main employer, Crown Paints, is situated across the road.

Coldplay are on the ground's PA, as I part with £11.50 on the gate which gets the two of us in with a programme, that is of the highest standard - congratulations to The Digest for his many contributions. There's an over-powering smell of deep heat coming from the changing room area. 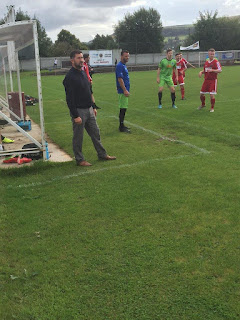 Most folk are congregated on the patio area outside the bar. We wander over to the far side of the ground, opposite the main stand, positioning ourselves adjacent to the away dugout. Darwen see an early effort turned around the post by the Pickering 'keeper after just 7 seconds. Three minutes later the visitors take the lead through Robert Chipps.

The Pickering manager is dressed in a shirt, tie and v-necked jumper - he looks like he's about to set off to a Sunday morning service at church. His assistant is 40 year old Denny Ingram, who made 228 appearances for Hartlepool United. There's not much doing at half-time. I get chatting to the Dad of a Pickering player who is from Driffield, near Hull. I can't understand a bloody word he says. He could be talking in Swahili for all I know. Murphy will be cross again, he's missed 'Cake By The Ocean' on the Darwen PA system. 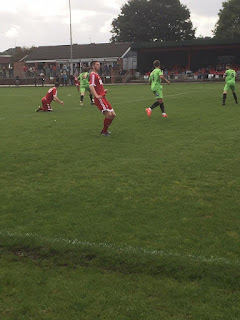 The Pikes look to have killed Darwen off with a fantastic goal from Cripps, who plays a give and go before smashing his shot into the roof of the net. Thirty seconds later a visiting player is caught dithering and dilly-dallying on the ball, they're punished by an alert Nick Hepple.

The referee is dishing out cards quicker than Postman Pat. The Darwen 10 jacket is shown two yellows. The official's patience is being tested as Pickering slow the game down at dead-ball situations. Poor old Sticky is running around like a blue-arsed fly and is lathered in sweat as he retrieves scuffed clearances from the undergrowth - he needn't bother booking me for slowing play down..

Denny Ingram strips off his shirt in front of a startled Ms Moon. He's looking rather hench and is proper tattooed up. A gooey-eyed Ms Moon begins to blush as Denny makes eye contact. I bet the bloke has never had a real ale in his life. He does manage to close the game down as Pickering go through to the next round of the FA Vase.

We're happy as Larry as we drive to the village of Laneshawbridge, in the Borough of Pendle, where we check into our bed and breakfast, before drinks and a meal at the delightful Emmott Arms.

Man of the Match: Auntie Val