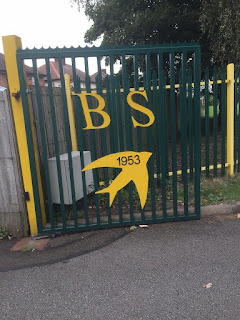 We're both fagged out on Sunday morning following our week long jaunt in North Yorkshire. I still manage to drag my weary body off the sofa and down Daleside Road in the general direction of The Embankment (HQ). The late summer sunshine is an added bonus, as I sink three guest ales in the beer garden, whilst poring over the Non League Paper.

I'm working from home this week. It's not as glamorous as it sounds. It does allow me to keep tabs on the exciting end to a three horse race for cricket's County Championship. Kevin Howells and Simon Mann on Five Live Sports Extra make it feel as if the game is being played in your front room.

I tick a new ground off on Wednesday evening, when taking in Bilborough Town v Unity at the Harvey Hadden Sports Village. It's an interesting venue with grass banks and steep views - you need a pair of binoculars to watch the game across the eight lane athletics track. The match is woeful, but at least I get the chance to catch up with Unity head honcho Morris Samuels, MBE and legendary Nottinghamshire groundhopper, Malc Storer - better known as the 'Bearded Wonder.' League leaders Bilborough ground out a 1-0 victory. 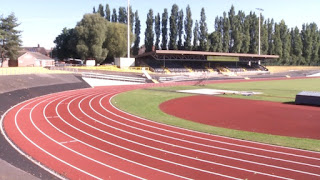 It's Thursday evening and don't ask me why, but I'm eating an 'All Day Breakfast' in The Roebuck, a Wetherspoons establishment on St James's Street in Nottingham city centre. I've signed up to a mindfulness and meditation evening at Cafe Sobar on Friar Lane - don't worry folks I'm not having a nervous breakdown, but have had a lot of change in my life over the past year or so. I have a pint of Dutch courage (Punk IPA) before the tree-hugging session.

The evening was a success. I manage to meditate for half an hour at Friday tea-time, before strolling down the banks of the Trent in glorious late afternoon sunshine, past The City Ground, onto Trent Bridge, before quaffing a couple of ales in the 'World Renowned' (lol) .. Trent Bridge Inn. The exciting finale of the County Championship is too much for me. Middlesex's Toby Roland-Jones sensationally takes a hat-trick to clinch the title for his team.  I'm asleep for nine bells following a couple of glasses of Punk IPA and a glass or two of Red. 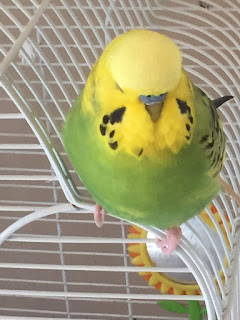 I'm as fresh as a daisy on Saturday morning. Murphy is hanging upside down on his swing, whistling away to 'I'm a Man' by the Spencer Davis Group - listen to the Smoove remix on You Tube, it's a belter. Murphy and Radio 2 DJ Brian Matthew have had a spat, as Murph forgot to send Uncle Brian a card for his 88th birthday last week.

I take a wander across the road, passing Nottingham Racecourse on my left. A drunken tramp emerges from the bushes swigging from a strong can of lager, before hurling his empty can into a hedgerow and disappearing down a footpath. I'm mightily relieved to be honest, as the chap looked a bit of a menace. I turn off onto a public bridleway. Joggers appear from out of a clearing in the woods. I'm intrigued as to why there are so many of them. Turns out it's a weekly 5km Park Run. I get gassing to one of the organisers and promise to sign up for next week, despite my nagging calf strain. 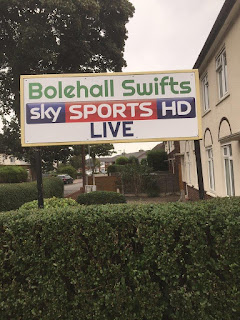 Funds are tight after our lavish lifestyle in Yorkshire last week. We spent a King's ransom oop north, so have no choice but to stay in the Midlands for the next few weeks. Ms Moon has been dispatched to Aldi to buy some bread and jam rations. I'm playing on Twitter and talking to a mardy Murphy, who is pecking away at some hard skin on the bottom of my foot - he's a better chiropodist than Neil Warnock. We're both astounded to see that Southampton fan and R&B, Garage 'singer' Craig David has 353,000 followers on the social network - Jesus wept, what is the World coming to.

It's twenty years to the day since Lincoln City beat Man City 1-0 at Maine Rd in the second leg of the League Cup, to win the tie 5-1 overall. I missed the 4-1 thumping we dished out at Sincil Bank due to it being my wedding anniversary - it was just after Steve Coppell's 33 day stay as manager. 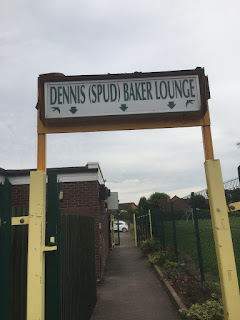 There's just time for a 'bread and jam sandwich' and packet of crisps before making the short journey to Tamworth. Leicester City are taking a thumping at Old Trafford. Even Bronx-born DJ Paul Gambaccini is getting in on the act as he plays 'Last Waltz With You' by Leicester singer Engelbert Humperdinck (who was actually born in Madras).

There's quite a heavy police presence in Tamworth. I presume it's because of the visit of FC United of Manchester to Tamworth FC's Lamb Ground. Bolehall Swifts play literally around the corner. Tamworth is a large market town in Staffordshire with a population of over 75,000. Notable people born or brought up in the town include Teardrop Explodes frontman Julian Cope and Leicester City winger Marc Albrighton - one of the greatest Bosman transfers in Premiership history. 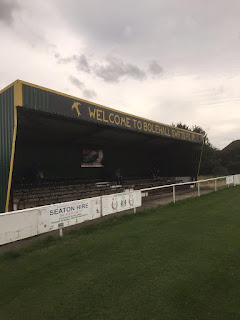 There's a nice feel about the place at Swifts' Rene Road ground. They were founded in 1953 and their floodlights were officially opened a few years ago by Stoke City manager Mark 'Sparky' Hughes. We're greeted by club secretary Mark Brooks, who gives us a potted history of the club and also very kindly donates £10 to the Parkinson's Disease Charity that we're raising money for. Today is an FA Vase tie with £800 prize money up for grabs.

I love the ground with it's rickety old stands, sloping pitch and community feel. We chance upon an FA match observer (mentor). I mention that it's great to see two lady assistant referees. He's a lovely chap who tips us the wink on a few cool grounds to visit in the Coventry area. We leave him be, as he frantically places a few last minute bets before the 3pm kick off. 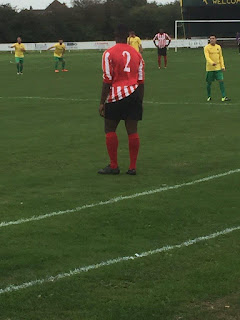 We bump into a Shifnal supporter as the teams kick off, he says they are a decent passing team. I might need to arouse this guy with some smelling salts at half-time after watching his team lump the ball forward for the entire first half. The Swifts are more pleasing on the eye and have the game's stand out player, a left-footed lad, who can play on either wing.

Ms Moon is wearing a black leather jacket, I ask her if she ever went out with Arthur Fonzarelli ? She gets the hump and changes her set at the break, preferring a blue jacket purchased from TK Maxx. We splash out on a raffle ticket, but already clock that the prize is a bottle of Echo Falls, which I wouldn't fancy stripping paint with. The guy selling tickets says £1 a strip or £2 for him to strip - thankfully the prize is claimed at half-time. 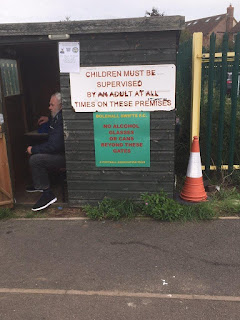 The visitors must have had an almighty bollocking as they play with far more purpose in the second half. Poor old 'Tickle' up top, couldn't hit a cow's arse with a banjo. One of his shots clears the bar by a country mile before hitting the window of an old people's home awakening the residents from a Saturday afternoon snooze.

Shifnal have a centre forward as tall as 'High Tower' from Police Academy. His feet barely leave the ground when there's a chance of a header. Remarkably he scores with his bonce after a faux pas by the home 'keeper, who has been outstanding throughout. Even the industrious Tickle gets in on the act, putting the game beyond doubt, after rounding the 'keeper and rolling the ball into an empty net.

Man of the Match: Kyle Bache (Swifts' 'keeper)
Posted by Sticky at 7:02 PM