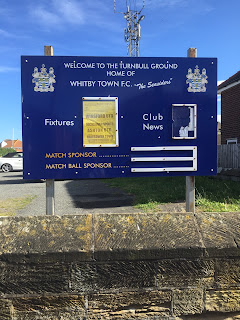 We head over to North Yorkshire from Lancashire on Sunday morning. It's a glorious day as we arrive on the West Cliff in Whitby. We bask in the afternoon sunshine on the veranda of the Abbey Wharf which looks over the estuary.

Monday is spent walking up to Sandsend, before returning to Whitby, where we make our debut at the Humble Pie and Mash Shop, on Church Street. Dinner is washed down with a couple of pints of Silver King from the Ossett Brewery stable at the Station Inn. As I retire for bed, news is filling my twitter timeline of the abandonment of a Non League cup tie between Brighouse Town and Shaw Lane. A player has collapsed and news of his condition is unknown. It preys on my mind as I fall to sleep. 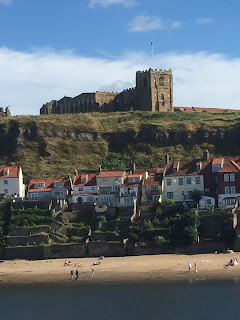 I toss and turn for most of the night. I switch my phone on first thing in the morning, the news is devastating. Daniel Wilkinson tragically passed away, he was only 26 years old. Daniel was a former student at Loughborough University, who had his whole life ahead of him. It's so, so desperately sad.

I'm fairly quiet on the trip to Scarborough. My mood darkens even further when Ken Bruce spins Michael Buble's new single. I'm hoping the baking sunshine and clear blue skies will cheer me up. We park in the North Bay, close to Peasholm Park. Those robbing bastards at Scarborough Council fleece us for £6 - no wonder folk think twice about parking illegally. 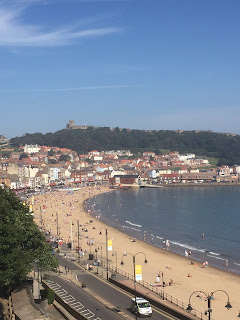 We amble past some plush new apartments that they've stuck up on the seafront. Dogs are bounding in the sand, retrieving balls launched from their owner's automatic ball throwers. The town is stacked out with tourists, despite the schools returning.

Bloody hell, Ms Moon's electronic ciggy thingy is kaput again. It's had more breakdowns than her flipping Audi. She tootles off up to the Vape Shop to have the coil repaired, whilst I have a mosey around. 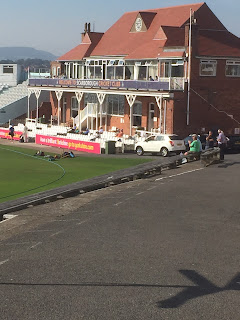 I stare up at the castle, perched high up on the hill. I made 'The Auctioneer' traipse up there on a sweltering hot day a few years ago, we were both gasping for air when we finally reached the summit. I notice that Billy Pearce is at the fag end of a six month season at the Scarborough Spa. It's ironically called a 'Laughter Show - it'll be a relief to us all, after the final show, that we can get back to laughing again! I see a huge puff of smoke billowing in the air up the High Street. Ms Moon's electric fag is fully functional again - now that does bring a smile back to my face.

We have luncheon at a French cafe before Ms Moon has a solo run up the South Cliff funicular railway. There's just time to pop my head into Scarborough Cricket Club on North Marine Road, where Yorkshire and Notts 2nds are playing, before the short journey back to Whitby. 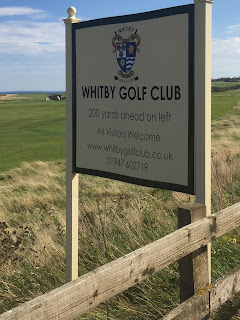 I leave Ms Moon to watch the latest gripping episode of Emmerdale Farm. I wander up the West Cliff before taking a left turn along Upgang Lane. Mist is rolling in from the North Sea, a pea-souper of a fog is forecast for tomorrow. I may have seriously under-clubbed on the clothes front, as I've still got my shorts on.

Whitby is a seaside town in North Yorkshire with a population of just under 15,000. It is situated on the east coast at the mouth of the river Esk. The Irish author Bram Stoker began visiting the town in 1890 and it is believed that this was behind the inspiration for him to write his Dracula novels. 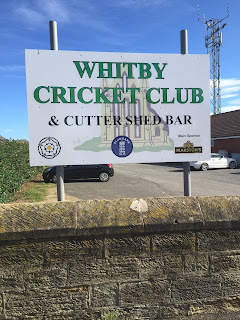 On 30th September 1914 the hospital ship Rohilla was sunk after hitting rocks at Saltwick Bay. Of the 229 people on board, 85 lost their lives. Most of them are buried in the churchyard at Whitby. On the West Cliff there is a statue of James Cook, who served his apprenticeship in the town.

Notable folk from the area include: Downton Abbey maid and voice of Wendy from Bob the Builder, Joanne Froggatt, Yorkshire and England cricketer Adam Lyth and former Southampton and WBA forward David Mills, who became Britain's first £500,000 player. His career was cut short by a serious car accident, which claimed the life of his father. He is now Head Scout at Leicester City and responsible for many of the signings that helped clinch the Premiership title. 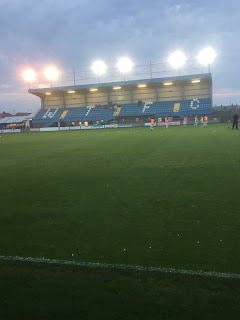 Whitby Town FC play at the Turnbull Ground on Upgang Lane. They were formed in 1892 and play in the Northern Premier League. The Whitby Gazette mentioned that they won an FA Cup tie last week for the first time in four years. They are currently on an eight match unbeaten run.

The groundsman of the adjacent Whitby Cricket Club is cutting the outfield with his mower and as pay £10 on the gate and £2 for the official matchday magazine. I clock Big D chin-wagging to Ilkeston chairman Nigel Harrop. Dick and I go back a long way. His son, Ross, is in the nets tonight for Ilson, having recently been released from Nottingham Forest, after 7 years at the club.

The Turnbull Ground is a little belter. There is a huge main stand which gives the supporter a panoramic view, with further covering on the far side. The playing surface is immaculate, you could play Crown Green bowls on it. The DJ means business as he pumps up the locals and small gathering of loyal Ilson fans with 'Firestarter' by The Prodigy. 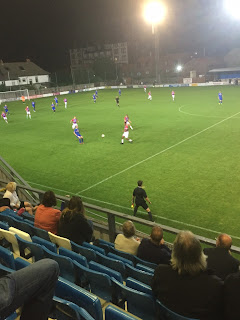 Both teams look incredibly young as they walk out to the centre circle. Big D remarks that Ilson's oldest player is only 23 years of age. There is an incredibly moving one minute's silence in memory of Daniel Wilkinson and recently passed Whitby supporter.

The Seasiders are all over the visitors like a rash, as Ilson try to come to terms with rather disjointed formation. Young Ross, in the nets, commands his area and comes for everything. He is courageous and fearless. As Dad says, he'll even resort to a Jackie Chan unconventional martial art kick if need be. He's already made a couple of smart blocks before the inevitable and well deserved goal is scored for Whitby by Dale Hopson on his birthday.

Ilkeston are awarded a free kick shortly after. Left back Rory Coleman lines up a shot like a rugby player does for a conversion. Big D pipes up that he hasn't enough power in his technique to score from this distance, just as the ball sails over the wall, evading the outstretched hand of a floundering Whitby Town keeper, before hitting the top corner of the net. "You can quote me on that one", chuckles Big D, as an Ilson fan greets the goal by ringing his bell. 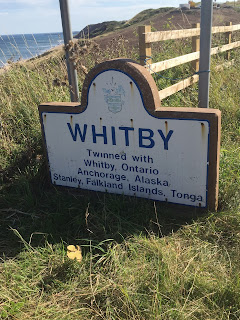 Ilson need half-time desperately to regroup, it can't come quick enough as the ball is not sticking up top. One cross too many comes in from the left hand side and is superbly executed by Matthew Tymon, ghosting in from the right wing. It's all too much for the Seasiders PA man who at half time plays 'Diamond Lights' by Hoddle and Waddle, before being carted off to the Funny Farm.

Whitby continue to waste chances in front of goal. They find young Durrant at the top of his game. The match is played in a wonderful spirit and refereed superbly by Mr Whatling from Driffield. Ilson forward Anthony Dwyer, who has had spells at Notts County and Mansfield Town pings a shot from just outside the area, only to see Shane Bland tip his effort onto the crossbar.

The full time whistle is blown, ending a very entertaining game. I wish Big D a safe journey home across the Yorkshire Moors and make the ten minute walk back to the warmth of our holiday flat. I can't half pick em.

Man of the Match: Ross Durrant
Posted by Sticky at 5:37 PM