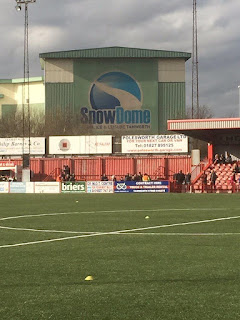 It's Sunday morning. Ms Moon and I are leaning on the boot of the Audi, lacing up our walking boots in the car park of the Belvoir Brewery, in the village of Old Dalby. Gold Cup winning grey horse, Desert Orchid, used to graze in the fields at a local stud a mile down the road in Ab Kettleby.

White Van Man has organised a 10km ramble over stiles, traipsing down footpaths and through the surrounding villages of Nether Broughton and Upper Broughton. The conditions are testing and the walk exhausting, due to a plethora of puddles and mud-caked fields. Three hours later, we're both out on our feet, and close to death. We leave White Van Man to polish off a carvery at the brewery - I hope the Yorkshire puddings are spot on, or at least Aunt Bessie's.

I haven't the energy or ability to walk up to the King Billy in Sneinton for my lunchtime constitutional. 'Ms Moon Taxis' drop me off 50 yards from the pub door. I slump in my seat and down a pint of Citra from the Oakham Ales stable. There's no Ms Moon taxi home; the 'Princess' charges treble time after 3 pm on a Sunday - plus the omnibus edition of 'Come Dine With Me' is on the box. 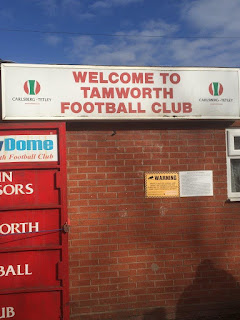 It's Tuesday tea-time. Most of the day it's lagged it down with rain. The Taxman and I had hoped to go to Coalville v Grantham Town in the Northern Premier League. There's a late change to the schedule. I'm enjoying the Conference North, and have clocked that Brackley Town are entertaining Kidderminster Harriers.

I pick up a fragile Taxman who is still feeling the after effects of an afternoon session with the 'Monday Club' at the Trip to Jerusalem in Nottingham, yesterday. We head over to Brackley in rush-hour traffic, listening to the excellent Simon Mayo on Radio 2. We grab some tea in Silverstone at the Green Man on the A43, before the short journey to St James' Park (not the one in Newcastle).

I've already phoned up the Club, as countless games fall by the wayside due to waterlogged pitches. I'm reassured that the game is ON. I can see why; you could play Crown Green bowls on this playing surface. Trumpy Bolton reminds me on Facebook that we've been to Brackley in 2010. I reply that they're still counting the bar takings and that the Club have named a stand after him. The Harriers can consider themselves unlucky, going down to two late strikes from substitute David Moyo. 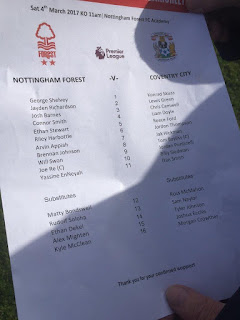 I have a quiet night on Friday evening. Just the one pint in the White Horse in Ruddington, with Barthez, and a few jars with the 'Mayor of London' in the Herbert Kilpin, before retiring for a curry at the Balti House in Heathcoat Street, in Nottingham.

I switch on the radio on Saturday morning. Dermot O' Leary has replaced 'Sir' Brian Matthew on Radio 2 - it reminds me of when former Nottingham Forest boss Frank Clark used to draft in old 'Pineapple Head', Jason Lee for Stanley Victor Collymore, such is the gulf in class. Murphy the budgie will be turning in his grave.

Ms Moon fails to make the team bus for today's clash between Tamworth and Salford. The good lady has a sales conference up in Brigg, Lincolnshire. I tip her a visit to the White Horse Wetherspoons pub and Brigg Town football ground - both ticked off with Trumpy Bolton - before waving the good lady off, in Sainsbury's car park, on Mapperley Plains, following a hearty breakfast in the Copper Cafe. It's like a scene from Gone With the Wind. 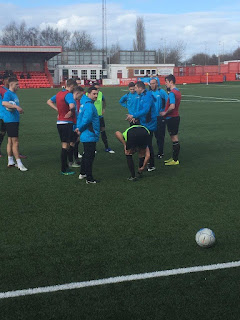 White Van Man is called up from the substitutes' bench. First port of call for 'Hopper' is the Nottingham Forest Academy, just off Wilford Lane. The Under 18s are pitting their wits against Coventry City, who were sensationally knocked out of the FA Youth Cup earlier in the season on the banks of the River Trent by Dunkirk FC, where they found the players and locals too hot to handle.

A coach from St Helens has broken down on the hard shoulder. It later transpires that Marine FC, from Liverpool, were on their way to Coalville Town. Non-League family pull together as a procession of cars from Coalville Town rescue the stranded Scousers. It ended 0-0. Sticky doesn't do 0-0s. 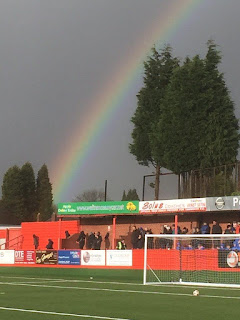 We park in a residential area of Tamworth, close to the official car park. I saw Dagenham and Redbridge pretty much clinch the Conference title here a few years ago. Tamworth is a large market town in Staffordshire with a population of 70,000. It lies on the River Tame which flows through the town. Up until 2001 it was home to the car manufacturer Reliant, who produced the three-wheeled Robin and Scimitar. The Lamb football ground, home of Tamworth FC is next to the Snowdome, the UK's first full-sized real snow indoor ski slope. Drayton Manor Park is also close by.

One of Sticky's heroes - Teardrop Explodes lead singer Julian Cope - was raised in Tamworth. Cope was staying with his grandmother in South Wales on his ninth birthday, on the day of the Aberfan Disaster in 1966. He later described it as having a profound effect on his life - 144 people, including 116 children, lost their lives that day. Premier League winner, Marc Albrighton was also born in Tamworth. 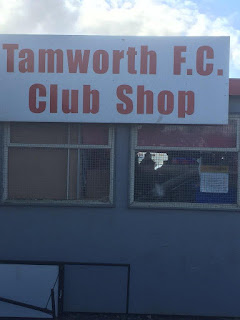 It's £14 to sit in the stands or £12 for on the terrace. We wander across to the far side of the ground, positioning ourselves adjacent to the Salford dugout. Murphy the budgie would have loved it here. His two favourite artists - Jess Glynn and Little Mix are booming out of the PA system.

Salford joint manager, Bernard Morley, is slouched in the dugout watching his team warm-up. Their away form is a concern. Only a few weeks ago I saw them wave the white handkerchief, at The Shay in Halifax, after being 2-0 up at the break. I'm somewhat of a Jonah, having never seen them win in five outings. It will be interesting to see what tactics are deployed on Tamworth's 3G surface.

Over 1300 supporters have rocked up at The Lamb. Bernard and Jonno are already getting an earful early doors. It only takes nine minutes for the Tamworth fans to pipe up with "you dirty Northern bastards' after Priestley clatters into the back of Dyer. 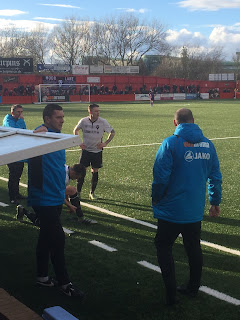 The Ammies (Salford) just don't look 'at it.' They pump up endless long balls to striker Mike Phenix, a willing runner. But where are the runners to support him ?  Salford fail to clear their lines properly on 40 minutes with Connor Taylor lashing home the loose ball. A miserable and fruitless 45 minutes ends in tears with the impressive Danny Newton hanging in the air at the back stick to head home a pinpoint corner.

Blimey, I can't see the Salford changing room sound system banging out the Stone Roses or Happy Mondays - it'll be Joy Division after that showing. They're shooed out onto the pitch after only a ten minute break.

Salford push the full backs on in the second half. Their talismanic midfielder, Scott Burton, is the sacrificial lamb. He's pushed back to protect the defence. They miss his energy, crunching tackles and will to win. One or two don't want to know - the Conference North isn't for pretty boys. They start to bitch and moan at one another. Phenix becomes disheartened and disinterested. There's a flurry of yellow cards brandished for indiscipline and dissent, as the Ammies lose focus. 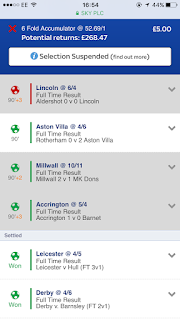 All three Salford subs are thrown on in an attempt to chase a game that has long gone. One is former Ipswich Town and Leeds United midfielder David Norris - no relation to Mrs Norris, the cat from Harry Potter.

Morley has stood stern-faced, arms folded in the technical area. 'Jonno' sits on a brick wall next to the dugout. The joint managers barely exchange a word all afternoon. Something's not ringing right about the whole day. Credit must go to Tamworth who have chased down, hustled, harried and won individual battles all over the pitch.

We're driving home when I get a text from 'Our Joe' saying that 'Lincoln are s**t." That's rather odd, as we picked up a useful point away at Aldershot Town. There's a picture of a betting slip. The Imps have cost him close on £300 in an accumulator. Joe, you can't arf pick em.