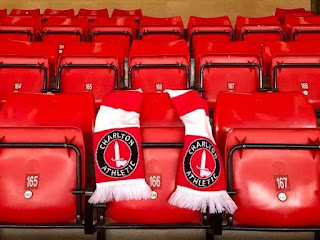 It's Saturday tea-time. Torrential rain is bouncing off the car windscreen as Ms Moon circumnavigates the Audi around the clogged-up roads of Manchester city centre. We dart through the swing doors of the Holiday Inn to be told by Reception that we've been upgraded to the Crowne Plaza next door - nice work Ms Moon. The rain has eased off as we pound the streets of Manchester, calling in at the Smithfield and Britons Protection for liquid refreshments, before dining out at the Wharf.

It's Wednesday afternoon and I'm heading back into Manchester, again, after a meeting up in Runcorn. I've had a pig of a day, nowt seems to have gone right. The M62 is at a standstill. It takes 90 minutes to complete a 30-mile journey. I'm feeling sorry for myself as I flop onto my Premier Inn bed in Prestwich. I flick the TV on, to be met with the horrific news coming from Westminster. It puts all my trivialities into perspective. I notice the following day a picture of a scarf draped over a red plastic seat at Charlton Athletic's Valley ground. PC Keith Palmer, a victim of the attack, was a season ticket holder at the Club. He sacrificed his own life, to save others.

I take a stroll around Colwick Country Park late on Friday afternoon, which is adjacent to Nottingham Racecourse, allowing time to drop by the Starting Gate for a pint of Tribute Cornish pale ale. Ms Moon asks if I fancy a game of scrabble. I decline the invitation, as it usually ends up in controversy, and in my case, tears. 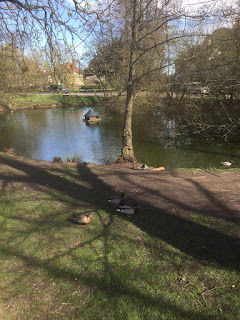 I'm up and away at just gone 9 am on Saturday - I have a Royal engagement in one hour's time. It will be HRH Trumpy Bolton's third outing of the season. The Audi needs a clean and valet. The Kosovan lads do a tidy job. I always enjoy some banter with their boss, because if looks could kill, he probably would.

The roadworks on the Melton Road absolutely kill me. Trumpy Bolton is loitering on a street corner on the Keyworth Bronx, swinging his Kwik Save carrier bag full of booty (Dark Fruits cider), patiently waiting for me. We greet each other with a Happy New Year greeting; it's been that long, too long in fact. He's already had a couple of Fursty Ferret and crumpet and cheese for breakfast.

Graham Norton is non-negotiable on the radio; we both can't abide the overpaid blithering idiot. We've got some dodgy radio station on. The DJ plays 'Can't Stand Losing You' by The Police. I casually mention that Sting and the lads played a gig at Rushcliffe Leisure Centre to the fur coat 'n no knickers brigade of West Bridgford back in the late 70s before they hit the big time. "Yeah, I know", replies Bolton, "I was there." California punk band, The Cramps, were supporting them that night. 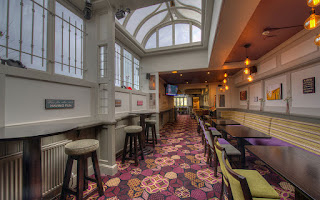 Trumpy is on a high since Leicester City's renaissance. He was calling for Ranieri's head after an early exit from the FA Cup at Millwall. Last Saturday he went on the Mother-of-all benders before, during and after a 3-2 win versus the Hammers. I enquire what he had to eat that day: "one and a half doughnuts, on the train home", he replies.

The Legend announces that he will be making his debut over in the Algarve in the summer. Workers at the Superbock beer-bottling plant in Faro have been put on a seven-day working week until Bolton lands back on UK soil. Trumpy has already seen off a litre bottle of cider before we exit the M1 onto the M25.

We park up just off Chipping Barnet High Street, next to a pond awash with ducks. Barnet and Cheltenham fans, please be seated while I explain this; you may just keel over if not pre-warned. Trumpy Bolton wants to make a financial transaction (usually in a pub) in every city, town and village in England, Wales and Scotland. He has pursued this hobby for 40 years. He only has Brentford to tick off in the whole of Greater London, and that is because my old SRI Cavalier blew up en route to Griffin Park in 1988. 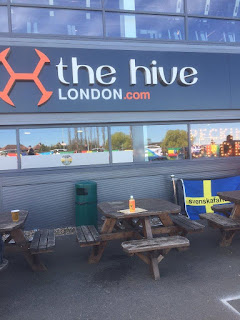 We've a pub sorted called The Monk. We poke our head through the door as the omens don't look too good with a 'To Let' sign erected outside. Two young lads tell us there's no food on today. A grumpy Trumpy chunters off up the street in search of another hostelry.

Bolton sniffs out another boozer up the road. He's unimpressed with a cocksure young 'un behind the bar. The lad is wearing a black leather bomber jacket. He looks like Tucker Jenkins off Grange Hill. The pub is nowt to write home about. The food is bang average, and so are Lincoln City, on the pub TV, who have fallen behind to an early Forest Green goal in their biggest six-pointer of the season at Sincil Bank. Bolton is upset again when the arrogant barman fluffs up his drinks order. We bale out while the going's good.

Barnet's ground is 6 miles down the road. Due to traffic congestion it takes an age. We drive past the John Keble Church in Edgware. Trumpy says he didn't know that the former Spandau Ballet drummer had turned to God (for older readers only). 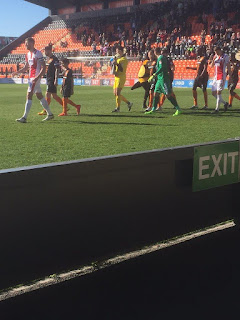 Barnet FC were founded in 1888 and play at the Hive Stadium. They recently left Underhill, their home for over 100 years. The new ground is situated in Edgware, away from their community - work that one out. Supporters are shipped in by bus.

I have a bottle of water in the bar as Trumpy quaffs a couple more Dark Fruits. I check my phone. I'm delighted to see 'The Lincoln' have stormed back to win 3-1. Ms Moon and I will be at Sincil Bank next Saturday when they entertain Bromley. 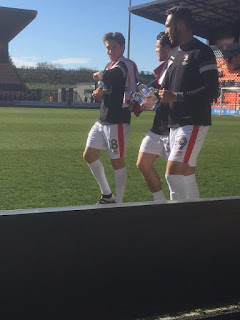 As we walk through the turnstile Trumpy clocks Big Mick Harford who Lincoln signed for free as a raw 17-year-old centre-forward back in 1977. Big Mick is Head of Recruitment at Luton Town. I would have shaken hands with him, but would have probably ended up in casualty with broken bones.

The Barnet DJ is playing Fire by Leicester band Kasabian. Trumpy chuckles that the Foxes fans haven't sung this song much at the King Power Stadium until recently. I'm disappointed to see Cheltenham striker Dan Holman is on the subs bench. I've followed his career at Long Buckby, Histon and Braintree Town. He banged in 30 goals last season in the Conference.

We're sat with the Press Pack and commentators for local radio. Trumpy is amused with the two guys behind him from Radio Gloucestershire. They seem rather chipper when they take the lead in the following a smart finish by Danny Wright. 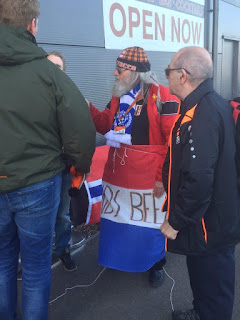 The Bees have only won one game in the last thirteen. Last Sunday, up at Notts County, they failed to find the Onion Bag despite playing against 10 men for 70 minutes. An alehouse clearance is heading in our direction. A five-year-old boy runs to retrieve it before Sticky Palms puts his mitts out and scoops up the ball, before returning it to a ball boy. The little boy's bottom lip begins to quiver. Sorry son, that's my first touch of a match ball at a League game in 45 years of watching. Don't think it's going to come easy to you, just because you are only five years old. I daren't look at his Dad and pray to God that Big Mick Harford isn't his grandad.

The natives are getting restless as 'Nugent Out' rings out from the terraces and stands. The Bees find energy in the second half. Sub, Curtis Weston, thumps home a volley on 70 minutes. Leading scorer John Akinde, who hardly broke sweat  first half, puts the game to bed on 77 and 79 minutes following some woeful defending by the visitors.

The commentators from Radio Gloucestershire are holding a post-mortom. They are in total shock. They mention the 'Nugent Out' chants and remark that the fellow will probably be penning a two-year contract on Monday, such are the small margins in a game. Trumpy tells them that the Cheltenham skipper has had a stinker. One of the guys just shrugs his shoulders.

Great to read that Trumpy is still gigging.
Loved the report... everything from The Crowne Plaza to Kwik Save bags.