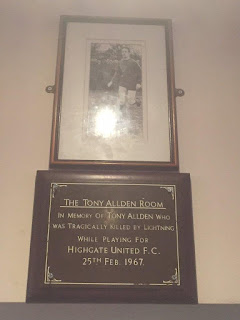 On January 30th I tweeted this: "I said to Ms Moon, if  'The Lincoln' beat Burnley in the FA Cup we'll be staying the night in the Penthouse Suite at the Lowry Hotel in Manchester #Dreamer #Imps.

It's Saturday February 18th, 2;30pm. We're sat in the Audi, in standing traffic - all roads heading out of Burnley towards the M65 are gridlocked. Sticky Palms is shaking like a leaf. Not because little old Lincoln City have dumped Sean Dyche's Premier League Burnley out of the FA Cup, at juicy odds of 12/1. No, it's more serious than that. I start sweating profusely. I've dug myself a massive hole on social networks. How the chuff am I going to wriggle out of this one? The Riverside Penthouse Suites at the Lowry are £710 per night. I've just spent a King's ransom in Tenerife. Shocking hell; I blame heavy rocker, Sean Dyche for this and that bloody ref. Why didn't he disallow the goal ?

I'll try the fake phone call gag, see if that works. I fish my mobile out of my pocket and 'punch a few numbers out.' "Hello, is that the Lowry ? I was just enquiring to see if you have any *cough cough* Penthouse Suites available for this evening ? Sorry, what was that, Mr Mourinho has commandeered them all. Okay love, no worries." Phew that was a close shave. 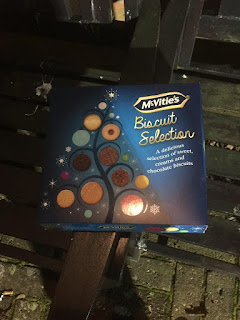 We're back in Nottingham for 6:00 pm. Ms Moon nips down to Morrisons to fetch some tea. I peg it up to the Herbert Kilpin. I'm on Cloud Nine. I've never felt like this after a football match. I'm an emotional wreck. Following Lincoln City on and off for 45 years has seen more lows than highs. I confess to having jumped on the Cowley bandwagon. But what a journey we are having. The first Non-League club to reach the quarter-finals of the FA Cup since 1914.

On Sunday morning I drive out to what was my favourite place to scout young footballers in inner-city Nottingham. Vernon Park, now known as Queen Elizabeth II Playing Fields, is in the suburb of Basford - a place that has seen its fair share of tragedy from gun crime and drug-pushing. It's a beautiful tree-lined park and a hive of activity. I sit on a bench, basking in the sunshine, watching a Notts Youth League fixture. As I walk back to the car, a melee breaks out between two pub teams on an adjacent pitch. The referee deals with it by dishing out a flurry of yellow cards.

Lunchtime is spent in the wonderful King Billy on Eyre Street, in Sneinton. I down a couple of Oakham Ales before the long slog home. I write up the Burnley v Lincoln blog. What a weekend we've had. 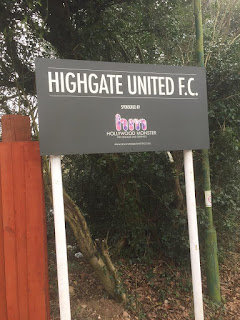 It's Tuesday evening and I'm back in Lincoln again, this time to watch the Whites of Lincoln United. The Ashby Avenue ground is close to Hartsholme Park, and is dwarfed by a block of high-rise flats. The Taxman pays me in. I get gassing to a few parents that I know, who have travelled from Nottingham - Basford United are the visiting team.

To be honest the game is bloody awful. Lincoln have more craft and guile. I'm really disappointed with Basford and their direct style of play, particularly when you consider that they play on a 4G surface. Their owner, Chris Munroe, is frustrated by what he's seeing. He shouts from the stands, "Get the ball down, and start playing." The highlight of the night is when we win first prize in the raffle - a box of McVitie biscuits. 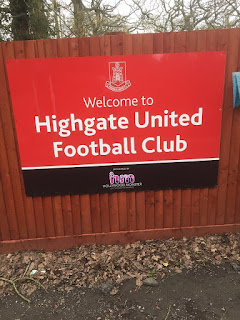 We have a quiet night in, on Friday evening, apart from a quick tea-time beverage at the 'World Renowned Trent Bridge Inn.' I dash out of the house at 10:00 am on Saturday morning. I've only had time for two slices of toasted Warburton fruit loaf, accompanied by some Gouda cheese and a strong cup of Nescafe Alta Rica coffee.

I flick on Radio 2, it's the dying embers of Brian Matthew's last ever Sound of the 60s Show. I'm not sure which sacking has cheesed me off the most: 'Uncle Brian' or 'The Tinkerman' ? I drive up the Trent Embankment and onto the Nottingham ring road, before turning off up University Boulevard. I take a left turn into Highfields Park. Nottingham City Boys are playing. I like to keep my hand in, and ear to the ground; you never know when you are going to be called back into action, do you ? 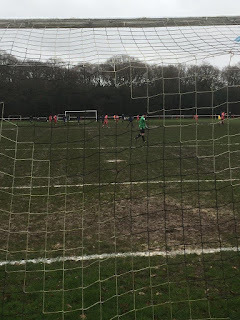 I drive back home. Chichester-born singer Tom O'Dell is on the CD. Murphy the budgie used to love Tom. I miss my little lad so much; he was great fun, and a good companion, when you work from home. Tom's finished, so I switch onto Five Live's 'Fighting Talk.' A Blackburn Rovers fan and panellist is explaining to Colin Murray that he received a condolence card from a mate when Tony Mowbray was appointed as manager this week following Owen Coyle's sacking.

It's a short drive over to the West Midlands, after the long trek to Burnley last weekend. Gambaccini is having a 'mare on Pick of the Pops. He plays a load of soft American rock pants from 1985 like Journey and Chicago. I threaten to jump out of the window if he spins another chuffer - it's a close call as he plays 'Run For You' by the Canadian singer Bryan Adams. 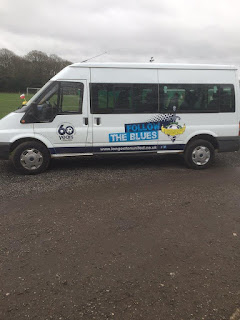 Shirley, in Solihull, where Highgate United play, has a population of over 35,000. Notable people to have grown up in the area include: Mandy Rice-Davies, the British model famous for the 'Profumo Affair', former England rugby captain Martin Johnson and Top Gear talentless smug TV presenter Richard Hammond.

I was aware of a footballer being killed after being struck by lightning during a Cup game at Highgate many years ago. What I didn't realise was, that it's 50 years to the day. In 1967 the Club were playing Enfield in an FA Amateur Cup quarter-final when a bolt of lightning sent several players to the ground. Defender, Tony Allden, aged 23 years old, never regained consciousness and died the following day in hospital. As an act of goodwill, Aston Villa staged the replay, with over 30,000 people attending. 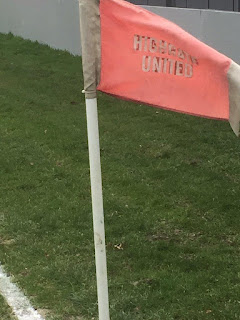 Within the hour we're on Tythe Barn Lane and pulling into the ground, where there is limited car parking space, due to a rugby game. Ms Moon gets herself wrapped up to the ninepins, whilst Sticky has a stroll about the joint. I poke my head into the Clubhouse. A lady is making a speech. I put two and two together. It is the widow of Tony Allden, who tragically died in the game 50 years ago. It's a beautiful, heart-warming, touching, moving moment. Players from both teams that day are in attendance.

We stand next to the home dugout, opposite the newly named 'Tony Allden Stand.' The guy next to us strikes up a conversation. He was a committee member, but just likes to write up the match reports for the website. I mention that we're from Nottingham and like to visit a different ground each week and write a blog. "Are you the bloke with the budgie ?" "I am mate, he sadly passed away a few weeks ago." 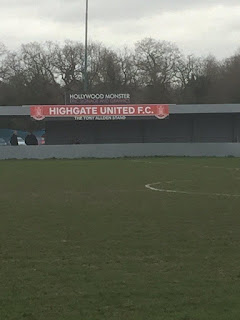 The pitch resembles something from the 70s Sunday afternoon TV show Star Soccer - think of a mud-clogged Baseball Ground, and you won't be far off the mark. We hold a minute's silence for Tony Allden. I catch a small boy out of the corner of my eye, stood next to a junior goal net. He has his foot resting on a ball, arms behind his back and is stationary - it's a beautiful moment.

Long Eaton take an early lead. Moments later the most extraordinary incident I've witnessed in 10 years of watching  Non League football happens. The Gate right back, who I've seen somewhere before, and reminds me of former NFFC full back Viv Anderson, powers down the wing before delivering an inch-perfect cross which is spooned over the bar from eight yards out by the centre forward. The full back boots an advertising hoarding in frustration and is immediately shown a Red card for 'violent conduct.' 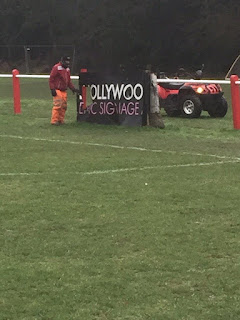 The whole ground is gobsmacked with the ref's decision. The boy seems so placid and languid. Long Eaton take advantage to make it 2-0. It's flipping freezing and drizzling with rain. We shout up a couple of cups of Bovril and seek warmth in the Clubhouse.

The pitch has become a quagmire. Highgate never give up and deserve what would appear to be a consolation goal, with ten minutes remaining. With a few minutes left, Highgate's best player, the left back, floats a cross in which the No.11 somehow heads wide of the post.

The referee, who has had a torrid time, brandishes another Red card to the Long Eaton No.6 following a two-footed lunge. At least he got that one right, as even the referee's observer is mystified by the first Red card of the afternoon.

Man of the Match: Highgate Left Back (Quality)