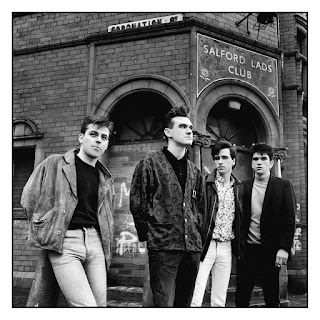 'The Princess' is piloting up the M1 North. Salford City have seen off Brackley Town with a scruffy, vital, winning goal. Attention is now turned to the FA Cup quarter-final. We should be at the Emirates cheering on the Imps (my team). The fact I've been at Portman Road and Turf Moor during the Cup run - yes I jumped on the bandwagon - counts for nothing with the Sincil Bank ticket office. No general sale tickets are available.

We could have got in the Arsenal end. But I've proper got the monk on with the whole saga. We tune into the game live on TalkSPORT. Lincoln give a good account of themselves in the first half. They're treading water for the final 45 minutes as the brilliant Chilean forward, Alexis Sanchez, runs riot.

It's Tuesday evening and I'm absolutely wetting myself with excitement. I'm in a 4x4 on the M6 with the 'Mayor of London' and his brother 'Big Bear Baker.' We're staying the night in Birmingham before heading over for Ladies Day at the Cheltenham Festival. We enjoy a few scoops in the city centre whilst watching the Foxes outwit Seville in the 'European Cup.' More beverages are consumed at Be At One Bar, before turning in for bed at some God unearthly hour, after Doner meat and chips. 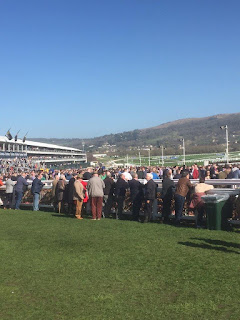 A full English breakfast is wolfed down at the wonderful Regency building of the Lansdown Hotel in the spa town of Cheltenham. Some of the boys are already on the sauce. I wait until we're on the course, in the Guinness Village, before quaffing a few pints. The boys pile onto a horse called Willoughby Court at 14/1, because it's a village where the 'Big Bear' lives in Notts. It wins by a nose. The celebrations are raucous and the syndicate £500 to the good.

Sticky Jnr has been texting me a few duff tips. I ignore his last one in the 5:20, due to intoxication. It duly canters up the hill to romp in at 11/1. I'm never betting again or drinking. We sink pint after pint at backstreet boozers in the town, before the night ends in utter carnage back at Be At One Bar. A surly and rude French barman is serenaded with "getting sacked in the morning" after the worst bar service seen since Rene from Allo Allo mucked up a drinks order for the Gestapo.

Jesus wept, Cheltenham has made me a broken man. I'm tired, grouchy and penniless. I just need a nice quiet weekend in. What's that 'Princess?'  We're out on Friday night in Nottingham and staying over in Manchester on Saturday. Hell's teeth. 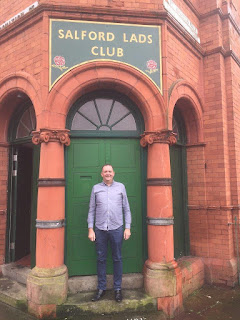 It's Saturday morning and we're both slouched on the sofa watching a re-run of The Bill on ITV Encore. PC Reg Hollis is more incompetent than the French barman. I summon the energy to scrub up, before we both jump in the car and head up the M1 North towards Manchester.
Graham Norton is doing my nut in. I scan a few stations on the whack Audi radio, before stumbling upon Murphy Palmer and Sticky's favourite artist, Jess Glynne - Murph loved her to bits.

First port of call is the iconic Salford Lads' Club on the corner of Coronation Street. It was opened in 1904 by Robert Baden-Powell, who later founded the Scout movement. It was used in the sleeve for The Smiths album The Queen is Dead. There are a few folks taking snaps in the pouring rain, coming from the slate-grey skies. The journey to Moor Lane, home of Salford City, is only a short distance away. 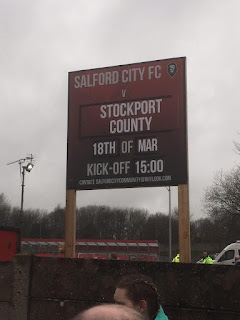 Salford is a city in Greater Manchester with a population of over 70,000. It was once well known for its cotton and silk spinning, and weaving in the local cotton mills. In 2011 Salford's MediaCityUK became the HQ for CBBC and BBC Sport. It is said the fictional setting of the soap opera Coronation Street is Salford. The folk song 'Dirty Old Town' written by local musician Ewan MacColl (father of the late Kirsty MacColl) is the origin of Salford's nickname.

Famous people born or brought up in Salford include: Emmeline Pankhurst, one of the founder members of the Suffragette Movement, Joy Division and New Order band members Bernard Sumner and Peter Hook, The Smiths frontman Morrissey, footballer Paul Scholes, Shaun Ryder from the Happy Mondays and the actors Robert Powell and Albert Finney. 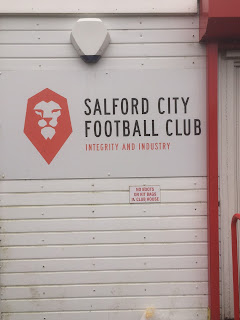 We park up in a residential area just down the road from the ground. There's an over-the-top police presence. The lads are lined-up outside the away turnstile. Police horses parade up and down the street, leaving shit everywhere. 'The Boys in Blue' love a bit of overtime, particularly when 'United' and 'City' aren't playing at home on a Saturday. Chuffing hell; they'll only be 1500 or so supporters in attendance.

We sit in the Main Stand, sheltering from the wind and rain. I get chatting to a guy next to me from West Yorkshire, who knows Salford's George Green who's on loan from Burnley - he signed for Everton from Bradford City in a deal worth £300,000 in 2013. 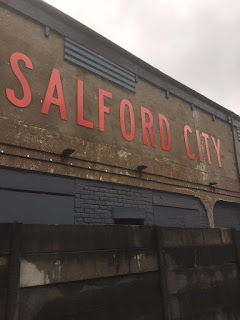 I'm intrigued as to what set the Salford  DJ will play. Radcliffe Borough, up the road, are this season's benchmark. The guy on Salford's decks doesn't disappoint. He spins Primal Scream, New Order, James, The Charlatans and The Smiths.

I check the full-time score from The City Ground. NFFC have scored in the last kick of the game to grab a point. There's no doubt that a seething Sticky junior will have sloped off before the final whistle to wave the Sheep off back over the cattle grid towards D***y.

Ms Moon arrives back grumbling from the Ladies toilets on the far side of the ground. There's no running water. She says that a few private number plates are parked behind the goal, suggesting that Phil and Gary Neville are in town. 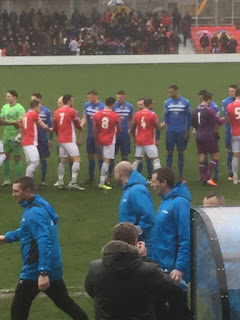 Both teams are desperate for points as they fight for play-off places. The game is an all-ticket affair, with the visitors controversially housed in the newly-covered terrace behind the furthest goal. The Hatters are soon in their stride, with Danny Lloyd as busy as a bee. He plays a give and go with Jimmy Ball before stroking the ball with his left foot into the bottom right corner of the net for his 24th goal of the season.

Salford are rocked by the goal, as three minutes earlier Josh Hine had fluffed a sitter, when losing his footing. Salford exert pressure on the Stockport defence who remain gallant and steadfast. Half time allows both teams to rest their legs from the boggy, rain-sodden surface. The DJ continues his pre-match form with a Stone Roses track. 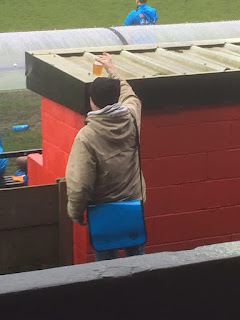 Salford up their game in the second half. In all honesty, they are magnificent. Scott Burton crunches in the tackle, George Green ghosts through challenges and 22-year-old sub, Nick Haughton, on loan from Fleetwood Town, jinks and weaves his way through a tired Hatters' midfield and defence. They work the Stockport 'keeper, who punches bravely and tips efforts around the post and over the bar.

Hatters' substitute Kaine Felix spurns a golden chance to put the game to bed having rounded the 'keeper. Stockport are made to pay 10 minutes from time when Michael Nottingham is bundled over in the box. Sub, Richie Allen, coolly sends Hinchcliffe the wrong way from the spot kick to earn the Ammies a thoroughly deserved point.

Man of the Match: Ben Hinchcliffe Stockport 'keeper
Posted by Sticky at 7:34 PM