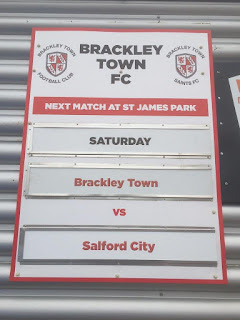 I drop off White Van Man at his crib on 'The Bronx' in Keyworth. He's straight up to his pit to watch Liverpool v Arsenal.  It's been good to spend some time with the 'Big Man.' I head over to the Ruddington Fish Bar - I'm 'Hank Marvin.' Ms Moon is holed up in a hotel in Brigg, Lincolnshire, for a sales conference. Fleetwood Town FC spend the night there before rolling over 'The Iron' 2-0 and moving into the automatic promotion places in League One. Trawlermen manager, the German, Uwe Rosler, is underestimated, and wasn't given the chance or time to build a team at Wigan or Leeds.

I'm stuffed after a large portion of mixed kebab meat and chips. It's the first Saturday night in a long time without an alcoholic beverage. I retire to bed at midnight after Barca trounce Celta Vigo and Match of the Day - today has been a footballing fiesta. 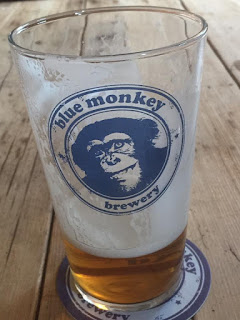 The Wagon and Horses at Bleasby, near Southwell, is ticked-off on Sunday, with a superb pint of 'Infinity' from the Blue Monkey Brewery, before we polish off a roast dinner at the Cross Keys in Upton. The only downside to the day is The Good Karma Hospital on ITV - it's the new Wild at Heart, and causes a rise in Sticky Palms' blood pressure. 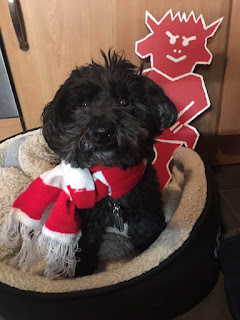 Oh, where to go on Saturday ? 'The Lincoln' are playing 'The Arsenal' in an FA Cup quarter-final. The Imps have handled the 9,000 ticket allocation badly in my eyes. There's a strict criteria set by Arsenal. They want traceability of all tickets. I'd be happy to show my driving licence, passport or any ticket from the Cup run. 'The Lincoln' choose not to go down the general sale route. Oh well, in all honesty, I never fancied a trip to the Emirates. Middlesbrough or Millwall were more my bag.

Tuesday night is spent down at Lenton Lane on the banks of the Trent, as young guns AFC Dunkirk pit their wits against a more experienced Clifton All Whites. Poor fayre is served up, with only a Niall Mellis penalty for Clifton separating the two sides.

I'm up at Heanor Town on Wednesday evening - I flipping love it up here. They're a club with a fantastic ethos and good values - not only that, the pie, chips, mushy peas and gravy are a must. It's £5 on the gate and £1 for a 46-page programme, which includes a blog written by some bloke called Sticky Palms (self-indulgent moment). I grab a quick chat with Press Officer Tony Squires and legendary 'On The Road' blogger Malc Storer, before seeing Heanor thump Leicestershire team St Andrews 4-0. 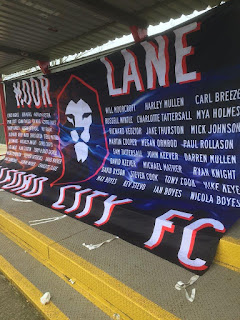 There's an SOS from Joe Palmer up at Leeds Beckett University on Thursday evening. Train fares are extortionate, any chance Dad can pick him up ? I start work at the crack of dawn on Friday, before sailing up the M1 towards 'Dirty Leeds.' It's great to spend some time with my youngest, even if it's only for a few hours in the car. Dad and lad tick off a McDonalds in Bobbers Mill, Nottingham, before I drop him off in a deserted Pear Tree car park in Keyworth.

There are more pressing issues at hand. Ms Moon and I haven't played Scrabble for a few weeks since a Sticky Palms spat following a controversial 1-0 loss. I head into town and get my ears lowered at a barbers on Mansfield Road. The lad in the chair next to me has just come out of prison. He tells the guy shaving his 'barnet' that he used to spend 23 hours a day in his cell.

I drop by at Waterstones on Bridlesmith Gate and ask for directions to the dictionary section. The dirty deed is done. I celebrate with two pints of ale in the Herbert Kilpin. It's another nasty, vicious game of Scrabble, with sledging and verbals of the highest order. I lose by 100 points. Is Ja a real word ? 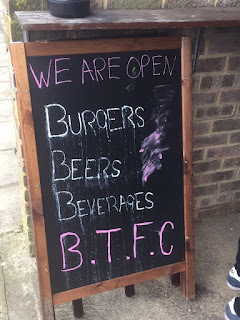 We're awoken by some scruffy, little Heinz variety mongrel dog, yapping on our street, early on Saturday. I threaten to throttle the little excuse of a mutt. Ms Moon says I'll get sent to prison. I quite fancy 23 hours a day in a cell reading my Kindle.

Ms Moon goes shopping, whilst I stretch my legs around Colwick Country Park. We head towards Brackley at midday. Graham Norton and his posse are getting on my wick on Radio 2. We exit the M1 at Junction 15A and are soon pulling into the car park of the thatched roof New Inn in Abthorpe.

The homely bar is full of locals. We're reliably informed that the barmaid is having a crafty fag in the backyard. A rather flustered, red-cheeked lass sheepishly sneaks in through a side door. I enjoy a pint of Hook Norton Gold. Ms Moon opts for rump steak, whilst Sticky prefers fish 'n chips. 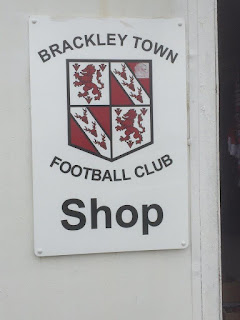 St James' Park is a 20-minute drive away. I came here with 'The Taxman a few weeks ago. We park up on a residential street, a few minutes' walk away. It's £12 pound on the gate. The DJ, when I came v Kiddy 10 days ago, was on flames. He played loads of Indie music as well as The Libertines and Razorlight.

I first came here 7 years ago with blog legend Trumpy Bolton. It's a wonderful club, full of friendly folk. Trumpy drank so much that day - they're still counting the takings. Sadly, no stand is named after him. Somebody ought to do that - he'd sponsor it. 'The Trumpy Bolton Stand' - it's got a ring to it. 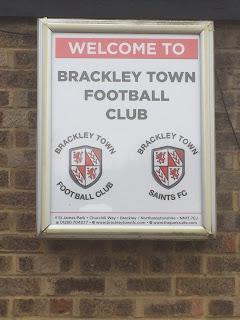 It's my third look at Salford in the last month or so. I saw them 'throw in the towel' at The Shay and put in an inept performance at The Lamb last week. Joint-manager Bernard Morley gave an honest and forthright interview after last week's debacle. He said the game was 'lost in the warm-up.' A warm-up he surveyed from the safe haven of the dugout without intervention. Salford didn't look comfortable on the 3G - it didn't suit their style of play or tactics.

I reckon someone from Manchester has hijacked the decks as the teams walk out of the tunnel to the brilliant 'Come Home' by James. There's a lively start to the game. It's toing and froing. Salford seize upon Brackley's 3-5-2 formation and punt the football forward quickly. Josh Hine finds himself one on one, but fluffs his chance by firing straight at the 'keeper. 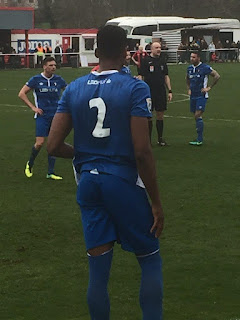 Morley prowls the technical area, appearing more vocal and animated. He's overseen the warm-up. Him and 'Jonno' seem more chipper as the ink has barely dried on two-year full-time contracts. The Ammies are tense on the field of play. It doesn't take long for one or two to fall out.

While you can't question the energy or effort levels, the distribution is poor. The ball is like a hot potato. Sticky's favourite, Scott Burton, vents frustration at the bench, telling Jonno and Bernard that the team have time to take a touch and get on the ball.

It's deadlock at the break. We don't do 0-0s. I saunter off to take some photos of flags behind the goal, where Brackley and Salford fans have sung and shared banter. Ms Moon brings back coffee, tea and some chocolate. 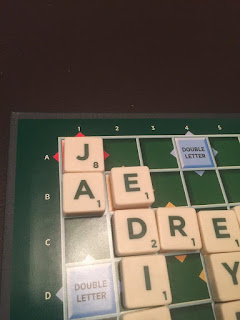 It looks like one or two Salford fans have been asked to leave the ground ? It's an assumption, but why else would you shimmy 15 foot up a tree to watch the game ?

The game is crying out for a goal. Mrs Norris whips in a corner from the left, Phenix bravely heads it back, Nottingham nods it onto the bar, before slotting home the rebound from close range. The whole Salford dugout punch the air in delight.

We have more pressing matters. At half-time the 'Dogs For Good' charity had collared (get it) Ms Moon. Bless her, she only had 10p in her purse. A distraught and embarrassed 'Princess' informs me of this on my return from the toilet. I have £5 on me. She races around the ground to chuck it in the bucket.

The game fizzles out. There's endless substitutions, as Salford change formation to 4-4-2 and 4-4-1. Neither team trouble the 'keeper. But at least the Salford camp seem happier at the final whistle.

Man of the Match: Phenix
Posted by Sticky at 7:24 PM