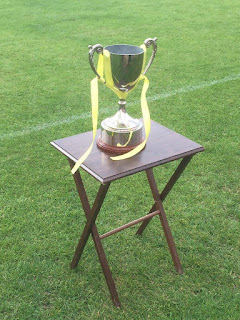 I wake up on Sunday morning to a pleasant surprise, those wonderful people at Yaxley FC have donated £35 to the Parkinson's Disease charity. Ms Moon and I take a late morning stroll along the banks of the river Trent, past The City Ground and the Nottingham Boat Club - where famous bands such as Led Zeppelin, U2 and Def Leopard have strutted their stuff back in the day.

We drop by the Ferry Boat in the village of Wilford, on the south side of the river. There's another drinks break taken at Sticky's current favourite hostelry, Castle Rock's The Embankment, which is situated just over Trent Bridge next to the pretentious  Riverbank bar and restaurant. I sink a pint of Dissolution from the Kirkstall Brewery in Leeds - it's amber nectar and an extortionate £5.30 per pop.

It's Tuesday evening and I'm driving through the picturesque village of Tollerton en route to the New Field of Dreams. The 'Keyworth Georgie Best' (Sticky Jnr) is in 'friendly' action tonight versus West Bridgford FC. 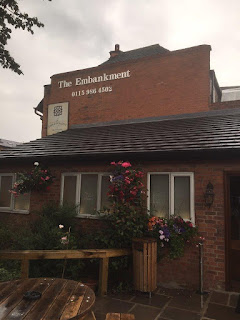 I managed him and his mates for one season only at under 18 level - I nearly had a nervous breakdown. One Sunday we were playing a game out in the Vale of Belvoir against some rednecks. We were 3-1 down with ten minutes to go. I'd already hauled off Junior before he blew a gasket at a linesman who was repeatedly and incorrectly flagging our man offside. It was roll-on, roll-off subs, so I let him off his leash for the dying embers of the game. He cracked home a 25 yard volley into the roof of the net, before bagging a crazy solo goal at the fag end of injury time. He practically broke the linesman's fingers with a bone-crunching handshake at the final whistle.

He's trying to break into Keyworth United's first team. They've hired an excellent coach in Steve Pemberton, who is trying to teach the beautiful game to this team, after three seasons of huff and puff boot and run football.

I'm back in this neck of the woods on Thursday. I watch my Godson, Will, and his little bro, 'Gangsta' playing cricket for local rivals Plumtree against my team, Keyworth. I catch up with my best friend, their dad, Steve, as Plumtree u19s cruise to victory. 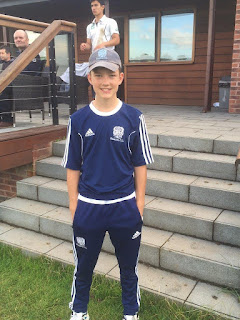 I knock off for work on Friday and peg it up to Mansfield Road to get my ears lowered. Wisdoms barbers is full of characters. The chap cutting my hair offers me a free one if I can guess his country of origin. I take a stab at Iraq. I'm close, but no cigar - it was Kurdistan.

I pop into The Embankment for another pint of rocket fuel, before hooking up with some guys at work, who I've never met before, for a spot of steak and chips in the Derek Randall Suite and some T20 entertainment. England fast bowler Jake Ball concedes 25 runs to all parts of the boundary in the final over of Leicestershire's innings. Notts are ruthless in the run chase as dark clouds loom. Lumb bludgeons the attack for a 17 ball 50, New Zealander Dan Christian betters this by one ball. I celebrate, on my tod, with another pint of Dissolution in The Embankment.

My feet are in bits on Saturday morning. I must have clocked up six miles yesterday. Murphy Palmer the budgie is perched on my shoulder whistling to 'Lost That Loving Feeling' by the Righteous Brothers - he'll be on the receiving end of that tune when his team Norwich City, take a thumping at NFFC later in the season - I've not told him yet that the Canaries have been relegated. Brian Matthew is on flames this morning on Radio 2, he spins Johnny Radcliffe's Northern Soul classic 'Long After the Night is Over.' 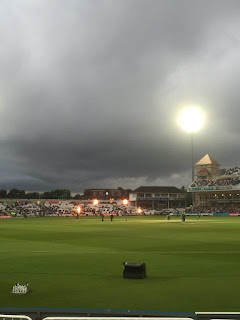 I nip to see the Kosovans to get my car washed. I have some banter with the boss. He tells me how he travelled to his Uncle's in France and watched two Albanian games live in Lyon during Euro 2016. I pop down Castle Boulevard to Majestic Wines and order up a couple of boxes of Red.

There's just time to blast Murphy the budgie with cold water before jumping into the car and heading out to the East of England. 7 year old Daniel Ackerman has missed the team bus to Cambridgeshire following the junior goal post incident at Yaxley FC  last week. The FA will quite rightly throw the book at him. We're lunching at the friendly dining pub, the Dog and Doublet, out in the Fens. The fish and chips are to die for. A swarm of thunder flies and the constant ear-aching electro-jazz music are annoying though. I have a little moan at the barman on the way out.

We arrive at the GER on Robin Goodfellows Lane in March well before kick-off. It's £5 a piece on the gate. I fall in love with the rickety, old blue-painted stand that runs along the nearest touchline. Rumours are rife on the Non League circuit that it is to be demolished soon. There are bungalows behind the furthest goal, with a covered stand behind the dugouts on the far side and a grass bank at the back of the nearest goal. 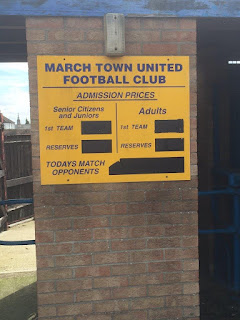 I chance upon a chap rummaging around in some undergrowth taking some snaps. It's legendary West Yorkshire groundhopper, Gerry from the Onion Bag blog. What a lovely chap he is too. We tip each other the wink on a few hidden gems we need to visit.

Bloody hell, I don't believe it, that flipping Leicester City scout is here again. He loves wearing his kit. He's still driving around in that battered old silver car that Jamie Vardy flogged him. I bet it still has Jamie's Boys II Men and Backstreet Boys CD's in the glove compartment. Heart FM is booming out of the PA system. Having heard Robbie Williams, Craig David and Adele, I'm on the verge of swallow-diving into one of the nearby dykes. 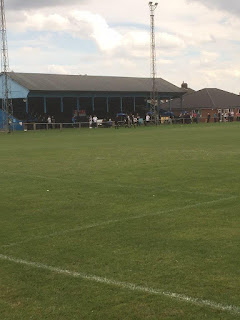 The circumstances of today's game are really sad and touching. In 2002 three young lads lost their lives in a car accident, two of them were members of the March Town under 18 team. Each year a game is played in their memory and a cup presented to the winners. My spine tingles as the players emerge from out of the dressing rooms. What a desperately tragic story this is. But what a fitting tribute.

There's an incident at the Food Bar as word spreads there are no onions being fried. Every customer asks for onions as a wind-up - Gerry from the Onion Bag is particularly upset. The game is played at a fast pace. The Hares from March impress particularly. They deservedly take the lead with two well worked goals. It's worth noting that they play at a League level below Wisbech in the football pyramid. 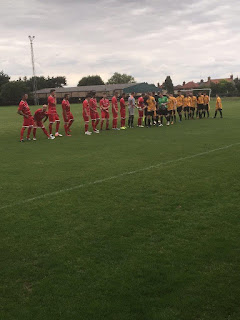 I get chatting to a lovely old gentleman in the second half. He watches Wisbech most weeks despite living in March. On this performance I've got some sympathy for the chap. March have been outstanding. They put the game to bed following another quality cross. The stand-out player is Adam Conyard their 2 jacket. Adam is incisive in the tackle, supports the attacks and passes the ball with intelligence. Surely he can perform at a higher level. He hasn't given Wisbech winger Billy Smith a sniff. He lets him out his pocket only when the excellent referee blows for time. Fair play to the home 'keeper for some cracking saves and brave keeping.

Man of the Match: Adam Conyard
Posted by Sticky at 6:32 PM