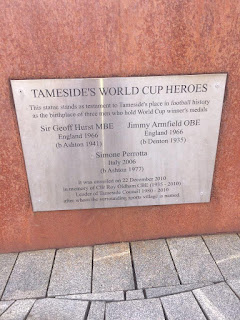 I'm chuffed to high heaven with the start we've had with raising money for the Parkinson's Disease charity. I'm donating £1 per goal I see at every new ground this season. Radcliffe Borough chairman Paul Hilton pretended that the score was 14-6 last Saturday v the Trotters and donated £20. What a top man. £76 has been raised during week one.

I'm still ploughing my way through Bill Bryson's 'The Road to Little Dribbling.' Bryson visits the track where Dr Roger Bannister broke the four minute mile. On the morning of the race, Bannister went to work in London, before jumping on a train to Oxford. He then walked two miles to a friend's house where he tucked into a ham salad for lunch. It was his first race in eight months. He collapsed almost unconscious into the tape. Apart from a photographer and a few officials, hardly anyone saw the race.

Tuesday evening is spent in the company of a rather chipper 'Taxman' at Carlton Town's Stoke Lane ground. Notts County, despite fielding the first team in the second period can only bother the scorers once. 20 year old Jack Steggles in the nets for the Millers is different gravy. Mancunian John Sheridan appears very droll. 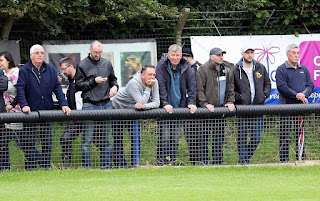 Murphy Palmer the budgie has been a naughty lad this week. He's sat in my porridge, nicked crumbs off my cobs (Barm cakes to Lancs folk) and pooed on my head. He's sent to bed early, where he head-butts his mirror for the rest of the evening.

Friday lunchtime is spent in the dentist's chair having a tooth refilled whilst Beyonce's 'Single Lady' is blasting out on Lincs FM in the surgery. I gate a couple of the Navigation Brewery's IPA 'Love is the Law' at the Starting Gate in Colwick at tea-time, before retiring to the sofa for some Punk IPA and Portuguese wine. There's an attempted  military coup in Turkey before I hit the sack.

I wake up at the crack dawn singing the lyrics of ABC's new single 'Flames of Desire' - don't ask me, not got a clue, don't even like it. It was a failed military coup in Turkey, with a heavy loss of life. What a desperately sad week it has been. I sort a pub out for Sunday lunch, whilst listening to the brilliant James Blake with Murphy perched on my shoulder. before we set off down Alfreton Road towards the M1. 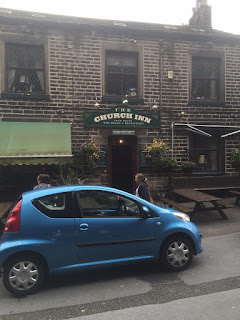 Sat Nav is trying to nudge us down the Woodhead Pass, but I'm not grin and bearing those long queues of traffic at Mottram. Fern Cotton and Martin Kemp are banging out some good tunes. Marvin Gaye's 'What's Going On' is the pick of the bunch.We go the long way down the M62, exiting at the Saddleworth Moor junction. We drive through a couple of pretty villages before turning up a tight street and rocking up at The Church Inn at Uppermill, just outside Saddleworth. I love Lancashire's natural beauty, the warmth of the people and their razor-sharp wit.

The pub is a cracker as is the church that dwarfs the hostelry. It has low beams, with prints on the wall and china, brasses and pottery sat on shelves. The girl behind the bar appears disinterested. It's the worst poured beer in history. The head overflows at the top of the glass, dripping down the side. She doesn't wipe it down, it's just plonked on the bar in my general direction - for the record it was a pint of Blonde Obsession from the Grey Hawk brewery. Ms Moon's latte looks like a milk shake gone wrong. A customer complains that his beer is off and asks for it to be changed.

It's only a short drive to Ashton-under-Lyne. A small group of tanked-up 'Dale fans are staggering down the road, swigging from bottles of beer, they can only be 16 or 17, tops. We drive past Ashton Cricket Club, Tameside Cycling Circuit, East Cheshire Harriers and a 3G pitch before entering the Tameside Stadium. 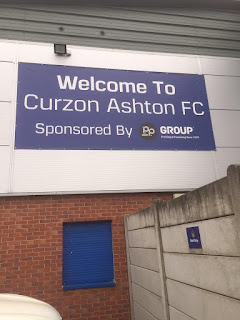 Ashton-under-Lyne has a population of over 40,000 and sits on the River Tame in the foothills of the Pennines. Rich and famous born in the town include:: Britain's first Foreign Secretary, Margaret Beckett, Arthur Brooke, founder of the Brooke Bond Tea Company, singer-songwriter George Formby, Sir Geoff Hurst, Last of the Summer Wine actor Brian Wilde, 'Tracey Barlow' off Corrie, actor Ronald Fraser, cricketers Andrew Harris, Harry Pilling and Gary Yates and the footballers Alan Wright, Steve Wigley and Mark Robins.

We admire a statue of three World Cup winners from the town - Sir Geoff Hurst, Jimmy Armfield and Simone Perrotta. Ironically Sir Geoff's No.10 shirt failed to meet the expected asking price of £500,000 at an auction earlier this week at Sotherby's. Curzon Ashton were formed in 1963. In 1981 jinking, fleet-footed winger Steve Wigley signed for Brian Clough's Nottingham Forest from Curzon.

It's £6 each on the gate and £1 for a decent programme. We're straight into the snack bar for pie and peas at £5 for job lot. A guy taps me on the shoulder and introduces himself as Joe Lawton. The supporters' committee, of which Joe is a member, have agreed to donate to the charity. Joe's a top lad and has followed my blog for some time. 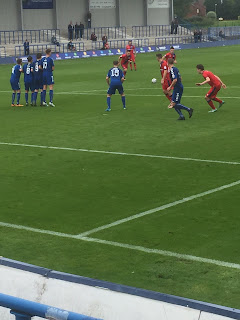 We wait for the teams to spin up as the DJ plays 'Human' by The Killers, before positioning ourselves behind the nearest goal that Rochdale attack. Rochdale have sent out two teams today, with the other playing at Stockport. This one looks stronger on paper - with Nathaniel Mendez-Laing and Joe Bunney up top. It also includes Callum Camps who was once rated by the Daily Telegraph as one of the top six rising stars outside the Premiership.

The pitch is immaculate. I can't for the life of me remember seeing one in the Non League in better condition than this. At first glance it looks like 4G. The Rochdale 'Baby Squad' (Shandy drinkers) are singing bollocks at the back of the stand on the halfway line. One is completely steam-boated.

'Dale 8 jacket Matty Lund is nailed early doors and has to hobble off. Rochdale take a two goal lead. Former Norwich City forward Ian Henderson threads a defence-splitting pass through to Nathaniel Mendez-Laing who draws the 'keeper before a cool finish. Joe Bunney (brother of Jive) smashes a shot which goes under the 'keeper to make it 2-0. Curzon are plucky though and keep it on the carpet. 20 year old Jordan Wright poses plenty of problems for the visitors with his pace and skill. 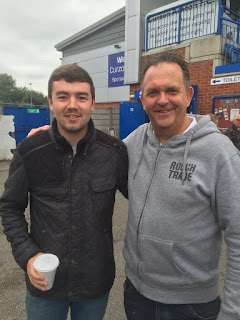 We take a seat in the main stand as the Red Hot Chili Peppers ring out from the PA system. There have been a few changes in personnel at the break. Rochdale get sloppy as Curzon peg them back with a goal from the industrious Paul Ennis. The excellent Henderson gifts them a pass which almost  results in an equaliser, but for a fine save from Josh Lillis.

Those drunken Rochdale fans are slumped on the concrete steps behind the goal, as the bar has run dry of Bass shandy. The youngest is in a right 'two and eight.' Rochdale pepper the goal with shots that are skew wiff, almost pole-axing their own supporters.

The referee blows the final whistle. It's been another successful day for the charity with £4 added to the pot.

Man of the Match: Ian Henderson
Posted by Sticky at 6:51 PM