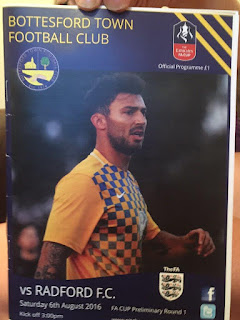 It's a gorgeous day on Sunday, as we stroll along the river in the village of Gunthorpe. Lunch is taken at a 200 year old listed building called the Staunton Arms in the Vale of Belvoir. They serve up a roast to die for, accompanied by a cracking pint of Bass. We drop by Ellerslie Cricket Club, on Wilford Lane, and watch a batsman swipe the ball into neighbouring gardens, before basking in the afternoon sunshine in the beer garden of The Embankment.

Last week I awarded March Town right back Adam Conyard my man of the match. Totally by coincidence I catch his 16 year old brother Rob in action on Tuesday; he's on trial for a Nottingham Forest X1 at Dunkirk FC. I was accompanied by The Taxman, fresh from his holidays in Cornwall. Forest have some good 'uns coming through now. Charlie Jemson, son of former Tricky Tree and Preston North End forward Nigel Jemson, is the pick of the bunch.

The highlight of the week is the 4-0 drubbing I give Ms Moon on BBC 1's Pointless. They're that many tears shed I have to ring up Severn Trent to turn all the water off. I'm away on business in Birkenhead, Rochdale and Birmingham. It's not a bad old life driving around the clogged up motorways in our country listening to Test Match Special. I'm pleased as punch to see Gary Ballance has been recalled to the team. There is an instant return, with a calm, cool, composed 70 runs. 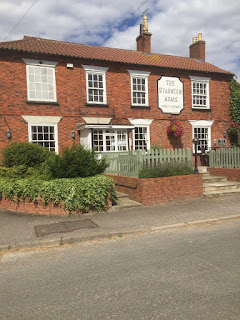 I arrive back on Thursday evening, jump in the shower, before wandering over Trent Bridge and hooking up with Coops and the 'Mayor of London' at the Southbank Sports Bar. Nottinghamshire Cricket Club's fast-medium pace bowler, Luke Fletcher, aka the 'Bulwell Bomber', is on stage with Dave Bracegirdle. Fletch is comedy gold. It's the best £5 I've spent this year. He's seriously under-cooked his value. I'd have paid four times that amount. He rolls out a string of anecdotes. Tears of laughter are streaming down my eyes.

I'm fagged out on Friday. I potted too many of those Ghost Rider IPA's. We're back in town early in the evening. The Bell Inn has tables outside. It's a great people-watcher as you look out onto the Market Square. The Punk IPA ain't bad either. 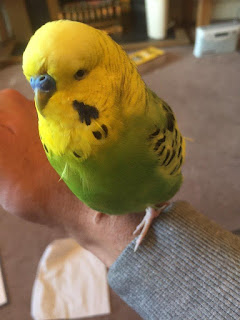 I catch Murphy Palmer the budgie gnawing his way through a millet spray ('crack cocaine'). We whistle together to Georgie Fame's 'Say Yeah Yeah' - although I prefer the Matt Bianco version. I nip out to Aldi to buy some bottled water. A procession of police vans are heading into town, with fully tooled-up plod frothing at the mouth in anticipation of a battle with the English Defence League, whose presence are gracing our town today. It's a busy day for the rozzers, as NFFC are at home and it's also the Riverside Festival in the same area.

Ms Moon is piloting the Audi towards Newark, the town is gridlocked with traffic. We head north up the A1. Myleene Klass is playing Whitney Houston on Smooth FM - it about tips me over the edge. After navigating some winding roads we enter the village of Epworth and more importantly the Old School Inn. 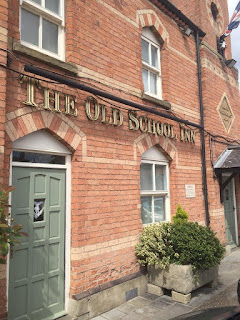 The actress Sheridan Smith was born in the village, perhaps she'll be in the pub, I've heard she likes a tipple. She starred in the ITV drama Mrs Biggs, which was directed by a chap called Paul Whittington. I used to play reserve team pub football with Paul.

We sit on the patio in the baking sunshine. I have a couple of Dizzy Blondes from the Robinson's stable. The food is terrific value. Another cracking pub has been ticked-off thanks to the Good Beer Guide.

Birch Park is only a 25 minute drive away. I clock a sign for the village of Flixborough. My Dad was the East Midlands correspondent for the Daily Mirror for 25 years. He only ever worked one Saturday shift on the paper during his career and this was to cover the Flixborough disaster. On the 1st June 1974 there was an explosion at the chemical plant, 28 people were killed and 36 seriously injured. 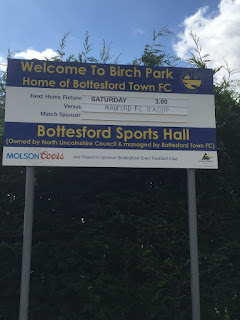 Bottesford is a small town in North Lincolnshire with a population of 11,000, that is joined to Scunthorpe. Queen Elizabeth II visited the town on her Golden Jubilee tour in 2002.  Famous people from Scunny include: BBC weatherman Darren Bett (Murph and I love Dazzler, he always looks on the bright side, even when it's throwing it down with rain), former Buzzcocks and Magazine frontman Howard Devoto, the golfer Tony Jacklin, Royle Family actress Liz Smith and X-Factor singer Jake Quickenden.

Murph and I have got beef with Quickenden. He sometimes plays footy for Bottesford, so we politely sent him a tweet to see if he was in the squad for the FA Cup game on Saturday. We never got a sniff. Olly Murs was the same, the miserable sod. Anyhow, those Radford lads would rough him up and tease him, after all, he was hoofed out on week 3 of X-Factor. Murph and I voted to keep in 'Only the Young' on gridlock that week. 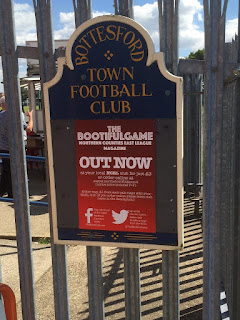 My Dad was a massive Lincoln City fan. In 1976 he went to Scunthorpe's Old Show Ground to watch Graham Taylor's Imps win 2-1. Dad was in a vile mood on his return home. He missed both goals due to his view been obscured by a dirty glass window in the main stand. Next thing I know he's ringing up the Scunny chairman's home number to put an official complaint in. His wife picked the phone up and politely told Dad that her husband was in the bath. "Well f***ing well drag him out the bath and put him on this call" my dad replied   ... lol.

It's £5 on the gate and £1 for a really good programme, which has a picture of Quickenden on it. Murphy will be sticking his beak into that tonight. It's a no-show from Quickenden, he's too busy styling his hair with Dax wave and groom wax. Big Glenn Russell, the Radford manager, is in the bar with the committee, whilst Jon Adams warms the boys up. It's the FA Cup extra preliminary round, with £1500 at stake for the winners. The Poachers DJ cranks it up a notch with Sham 69's 'If the Kids Are United.' Ms Moon is less than impressed with my pogoing on the terraces. 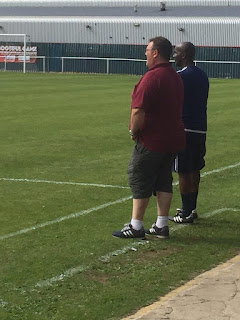 The Pheasants of Radford look sharp in the early stages. I'm more concerned about my man Big Glenn getting fried by the glorious sunshine, as he appears to have forgotten his trademark baseball cap. Bottesford begin to get on top, with Radford thankful to their keeper Luke Edge for some smart saves. Radford have a strong final 15 minutes and look the more likely to score.

The big news at half-time is a little lad called Ryan is stuck up a tree. His Dad prevents a emergency call to Fireman Sam by rescuing the youngster.. I ring Murphy to tell him that the DJ is playing our favourite song - Cake By The Ocean by DNCE (whack name). Murph is on fine form as his team the Canaries are thumping Blackburn Rovers 3-1. His favourite player and distant relative, Jacob Murphy, has scored. 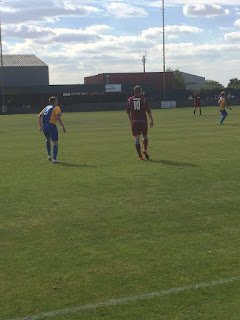 Radford are still in the changing rooms when Bottesford Town score the opening goal. The poor old 'keeper, who has had a decent game, comes for a deep cross, the ball falls from his grasp and lands at the feet of Martin Pembleton who blasts home from close range.

The impressive Kenny Reeves has the chance to restore parity within seconds but fails to pull the trigger. The game becomes scrappy, if anything Bottesford look likely to score again. Big Glenn throws on a few subs as a final gamble. A ball is floated in from the left by the pacey substitute, it skims off the head of substitute Connor Carter and agonisingly kisses the inside of the post before being cleared away from danger.

The final whistle is blown by an over-zealous referee who has faffed about in the second half, wasting more time than the players. It's the end of the road to Wembley for Big Glenn, but we'll be re-united again on Tuesday when they entertain neighbours Arnold in the East Midlands Counties League. Hopefully it will see the return of his baseball cap, as I bet his bonce is sore.