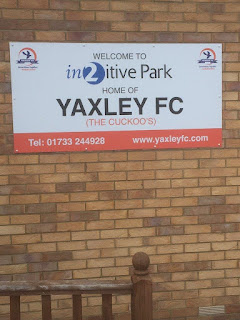 We enjoy a traffic-free journey back from Ashton-under-Lyne to Nottingham over the Woodhead Pass as the sun sets on the Pennines. Henry Blofeld, 'my dear old thing', the TMS cricket commentator, said the other day, "If you can see the Pennines it's about to rain, if you can't see them, it's already raining."

On Sunday we venture off-piste at Bradgate Park, just outside Leicester. Both of us gasp for air and quench a raging thirst, as we neck bottled water after a two hour trek. I get the monk-on in the Badgers Sett in the village of Cropston when a smirking barman says they've no pale ale on. The Sunday roast ain't bad though.

Travelling home, there's a unscheduled pit-stop in the village of Kegworth at the local cricket club. I've enjoyed many a nail-biting cup tie over the years.  Leicestershire and Northumberland under 15 girls are playing. Lord knows what time the visitors will arrive home, as it's well after 4pm when Leicestershire attempt to chase down the 196 runs that have been set. 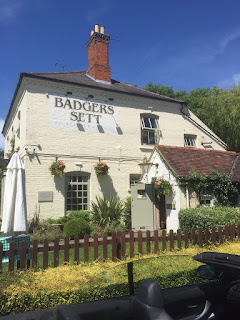 The big news in our area this week is that the original Bramley apple tree, planted over 200 years ago, has been given its last rites in the village of Southwell. It has a terminal fungus infection which has worked its way into the tree's water system.

Nothing takes my fancy on the midweek friendly front in Notts. I help out (score) the U10s at my local cricket club on Tuesday evening. It'll be probably their last game of the season as the schools are soon to break up for the summer.

Sad news is breaking from Ashton United on Thursday. Their star striker Martin Pilkington has been banned for four years after being found guilty of breaching betting regulations. Martin's a fine player, I saw him score at Hurst Cross on my last visit. He confesses to betting on the opposition in a game he was playing in, a game he actually scored in. What would of happened if he had taken a penalty in the dying embers of that game ? 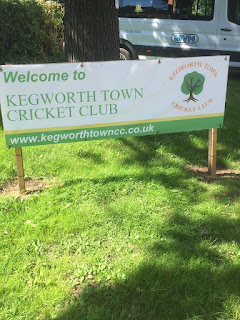 It's time for my Friday evening constitutional down to the Starting Gate in Colwick. Ms Moon and I, in muggy and overcast conditions, wander through Colwick Park, into woods, before discovering a clearing and a footpath down a slope which takes you through to the beer garden. They look after their ales here and their hanging baskets. I have a pint of Tribute, before the long slog home.

Murphy Palmer the budgie has proper got the face on. He cried like a little baby when I replaced a scruffy old toy with a pile of Cuttlefish attached to coloured bits of string that he can stick his beak into. He's not been out his cage since - the mardy little sod. He's pecking out a letter of complaint on Saturday morning to 88 year old veteran broadcaster Brian Matthew. Murph's not happy that Brian's gone all left field on his 60s show this morning, playing English rock band Led Zeppelin - Murphy prefers a bit of soul and Motown.

I spot a tweet on my timeline by Notts CCC legend bowler Luke Fletcher. Poor old Fletch has got himself in a spot of bother again. He was having a casual chat with radio commentator Dave Bracegirdle, unaware he was 'live on air.' He dropped in a few expletives. I can't wait to see him at an 'Audience with Fletch' at the Southbank Bar on Trent Bridge in a few weeks time. 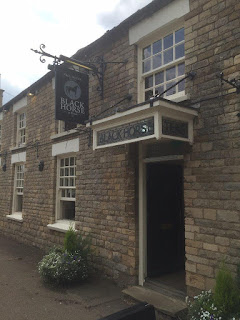 There's a few things kicking off in our fair city this weekend. Sticky and Murph's favourite Jess Glynn is headlining the Splendour Festival at Wollaton Park, whilst veteran Notts County defender Mike Edwards has a testimonial game versus Nottingham Forest at Meadow Lane.

We're bobbing and weaving down the A1 in the 'Rolls Royce' to ABC's 'Flames of Desire.' Radio 2 are flogging this to death. I've written better lyrics in my tea break. We're soon in the village of Elton, in Cambridgeshire, trying to find a parking spot at the village pub. The Black Horse is mobbed out with folk, who are attending a wedding at the church next door, before the reception in a marquee in the pub back garden.

We order up a couple of hot roast beef sandwiches and a portion of hand-cut chips. The pint of Greene King beer is as weak as a cup of Tetley's tea. The honey-stone beamed dining pub is spot on though. It's only a short drive back down the A1 to the ground. 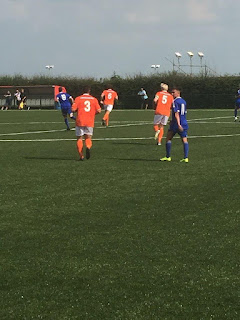 Yaxley is a village in Cambridgeshire, four miles south of Peterborough. Life's Too Short and Star Wars actor Warwick Davies lives in the area. Yaxley FC were formed in 1962 and are nicknamed the Cuckoos.

The car park is already packed to the rafters. We stick the 'Rolls Royce' into the overflow car park. I clock a Leicester City scout sitting in a battered, old, grey Vauxhall Astra. He'll have come to check on the Tulips' 17 year old sensation Jonny Lockie. "You come to watch Lockie, mate." A startled scout replies: "I'm not at liberty to say who I'm watching." "First rule of scouting pal, never wear your kit." I'm still laughing as I enter a clubhouse bustling with folk. 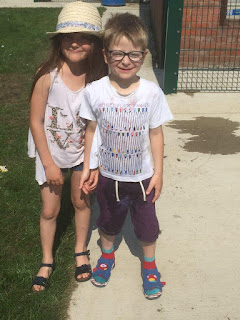 I intoduce myself to Spalding United manager Dave Frecklington, whose nephew Lee is captain of Rotherham United. Dave has agreed to support the Parkinson's Disease charity I am raising money for this season.

We're hooking up with my old schoolmate Ackers, he lives just down the road in Whittlesey. In 2004 we visited 107 football grounds in five days for charity. His 7 year old son, Daniel, is attending today's game after serving an 18 month FA ban after repeatedly swinging on a crash barrier at Kings Lynn's ground, despite a steward's wagging finger.

It's not long before 'Dan the Man' is up to mischief again. Health and safety regulations are breached on 10 minutes when Daniel and his twin sister, Rosie, get tangled up in a junior goal net. The plastic goal then tips on top of Daniel. Ackers and I are oblivious to the incident; we're heavily engrossed in the game. Ms Moon races across to assist at the scene of the crime. The PA man shouts out over the microphone: "To the lady with the two children, the goal nets are not toys, please refrain from playing in them." I am in bits, my stomach is aching with laughter. Ms Moon is not amused and gives Ackers daggers. 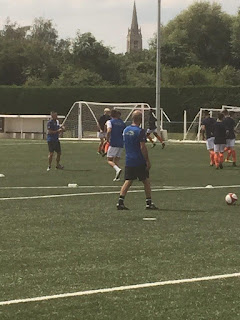 Spalding are a bit skinny on personnel. Lockie is on holiday in Hong Kong (I've done my homework Leicester). They take the lead through former Lincoln City striker Brad Barraclough. They are pegged back by a 25 yard pile-driver from the Yaxley 8 jacket. The impressive Dan Cotton lashes home a left foot shot and another Yaxley goal is notched again before the break.

The Cuckoos run riot in the second half, Spalding can't cope with the movement or trickery of 'Dot Cotton.' They rack up five, it could easily be a lot more. Barraclough has a brace to his name after a late penalty.

I was going to hang around for a drink with Dave Frecklington, but I guess right now he's steaming and that a dressing down for his players is of the upmost importance.

Man of the Match: The Ackerman's