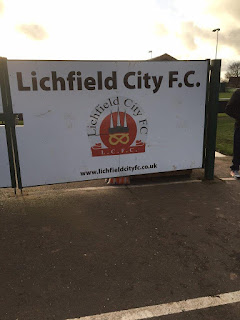 I don't fancy the hard slog back to the Trent Bridge Inn. The soles of my feet are in wrack and ruin. The Taxman kindly whisks me up the Radcliffe Road from Regatta Way, to the TBI. I hunch over the bar whilst slurping on a beautiful golden ale. I'm still seething about the 'no-show' from Clifton at West Bridgford.

AFC Wimbledon fans pile into the pub. They have smiles on their faces wider than the River Trent. They've turned over the Pies 2-0.  I'm in such a bad mood that even Murphy the budgie and his out of tune whistling, throughout BBC1's The Voice, can't cheer me up. will.i.am. is a tosspot, anyway. Clifton manager James Turner is drowning his sorrows and licking his wounds in the Stratford Haven.

It's Thursday evening. I'm in the 'Rolls Royce.' It's blowing a gale outside, and sheeting it down with rain. 'The Skipper' is riding shotgun. Tonight he has his first Under 19 game for two months. Worksop Town are the opponents. The old mining town of Shirebrook is the venue for the HKL Floodlit League game. Elephant Man actor, John Hurt, was born here, as was Colin Tarrant, 'Inspector Monroe' in The Bill. 1966 World Cup winning England full back Ray Wilson completes a trio of notable people from the area. 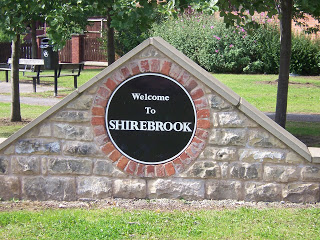 It's a bleak old night. Shirebrook Town's Langwith Road ground is perched on top of a hill, and is open to all the elements. I only help out, I'm not really interested in coaching any more. I've had my bag of that, although managing a Non League team for one year only appeals to me. It's on my wish-list of things to do before I bite the dust.

The boys are going to be ring rusty. It's important that 'The Skipper' wins the toss, as the gale sweeps up the hill. Joe has previous for losing crucial tosses in adverse weather conditions. The fool calls heads, we kick into the wind. The game as a contest is over at half-time. Clifton are three to the good.

The champagne moment of the evening happens with ten minutes remaining. Joe plays a holding midfield role, rarely venturing over the halfway line. He picks up a loose ball from 30 yards out and strikes the ball with such ferocity that the 'keeper hardly moves as it loops over him, rippling the roof of the net. There's no wild celebration or fuss made. He just walks back to his mark. 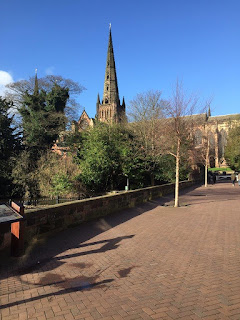 Friday can't arrive quick enough. I land a nice order just before close of play. I accompany Ms Moon to Enterprise Car Hire, in Colwick. She swaps her Renault for a shiny new Vauxhall Insignia. We'll give it a road test to Lichfield tomorrow. We jump on a bus into town, where we down a couple of drinks in the Bear and Lace on Maid Marian Way. Next week will see the blog make its debut on the Spanish island of Tenerife. I'll be dusting down the Olly Murs straw boater for this one.

Murphy Palmer is restless on Saturday morning. He's walking the plank whilst listening to Dionne Warwick's 'Walk on By' on Brian Matthew's show. I crank it up a notch by playing The Stranglers 1978 version. Jean Jacques Burnel is in fine form on the bass. I saw them in their pomp at Rock City in 1981. Lead singer Hugh Cornwell threatened to walk off stage unless fans stopped spitting. Burnel's patience wore thin, he karate-kicked a punter full on in the chops.

I grab a coffee and croissant, West Bridgford style, as Ms Moon catches up on Emmerdale Farm. Amos pours Seth a pint of real ale. The shiny white Insignia is soon making its groundhopping debut. We're parked up in Lichfield city centre before midday. First port of call is the Kitchen Shop where Ms Moon very kindly buys me a 'top of the range' wine glass for £4.95. We stroll into the old town, I gaze and admire the 600 year old cathedral which is basking in the winter sunshine. I say a little prayer for my team Lincoln City - we haven't won in 11 games. 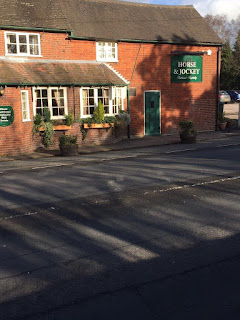 I've lined up the Horse and Jockey on Tamworth Road. It's a Good Pub Guide entry, which has recently had rave reviews on Trip Advisor. It doesn't fail to disappoint. Our waiter, Jake, is different gravy - he can even make the stuff. I have homemade steak and ale pie with a standard pint of Harvest Pale Ale. Ms Moon's fish melts in your mouth. Jake receives a generous tip for his outstanding customer service. The music ain't bad either, with 'He's the Greatest Dancer' by Sister Sledge being the pick of the bunch.

Lichfield is a cathedral city in Staffordshire with a population of just over 30,000. The poet Samuel Johnson was born here, as was one of Trumpy Bolton's favourite DJs, Radio 2's Richard Allinson. Lichfield City's Brownsfield Park is only a short drive away. It's £4 each on the gate and £1 for a programme that falls apart through an absence of staples. 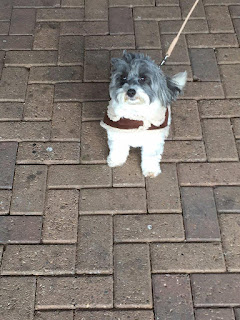 We immediately come across Daisy the dog - I've no idea what pedigree she is. Apparently she got the hump when her owners tried to put her winter coat on - she won't be complaining now though, it's blooming freezing. I tell her it's important to keep warm - "Sticky's got his Tog 24 Parka and beanie hat on", I say, as she tries to wee down my leg.

The ground is decent enough, with ample cover. It's our second look at Lichfield, having seen them give Pelsall Villa a good old gubbing in the autumn. They are managed by former Lincoln City and Kidderminster Harriers striker Gary Birch. The dreaded referees' assessor is on site. The young ref nervously makes small talk with him.

A text comes through from Clifton All Whites manager James Turner who is on weekend leave in the Emerald Isles. He confirms that Joe Palmer will make his first senior start for a club that has produced the likes of Jermaine Jenas and Darren Huckerby. 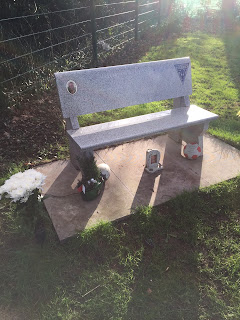 As we stroll around the ground Ms Moon points out a memorial tucked away in the corner of the ground up a grass bank. Philip 'Woppa' Latham tragically lost his life to Motor Neurone Disease at the age of 45 years old. He was a husband and a father.

The sad story preys on my mind as the game kicks off. Lichfield are well on top in the opening exchanges. It's utter tripe in the first half. Lichfield over-hit crosses, free-kicks and passes. Pershore's centre half has 'Big Tony' in his pocket, whilst 10 jacket looks like he can't be bothered. The visitors are forced into an early substitution. Former Nottingham Forest full back Viv Anderson replaces the right back - well it looks like him. Half-time can't come quick enough. The highlight of the first 45 minutes is when I bang my knee on a concrete post, which brings tears to my eyes.

Ms Moon waits for an eternity for a bottle of water in a busy bar. I grab a quick word with the assessor, and remark that I think the young ref has done well. He nods in agreement. I do find these guys somewhat socially awkward and secretive at times. 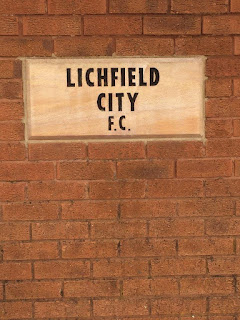 This game has 0-0 written all over it. The last time I saw one of those was at Hinckley four years ago. Andre Gray missed four one on ones that night. He signed for Burnley in the summer for a deal expected to be worth £9 million. Another one Notts County could have signed for £10k.

The game picks up in the second half. 'Big Tony' shakes off his marker before rounding the 'keeper and rolling the ball into an empty net. It's totally against the run of play. The visitor's dreadlocked striker couldn't hit a cow's arse with a banjo. He's run his socks off all game, though as soon as he is subbed  Pershore restore parity with a fully deserved goal, albeit a scruffy one.

It's end-to-end before the final whistle is blown. Lichfield can consider themselves a shade fortunate to have picked up a point.

Man of the Match: 'Viv Anderson

Viv Anderson aka Myles Jones, made me laugh.