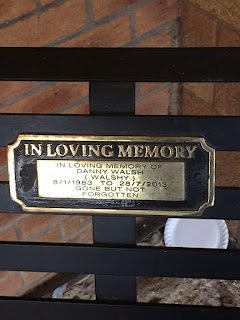 It's been a strange Christmas for me, although I have welcomed the break from work. I ate out for the first time ever on Christmas Day. The Riverbank on Trent Bridge, Nottingham was the venue (the Town Arms or Aviary in old money). It sits between Forest and County's ground, for those not acquainted with the area. Away fans usually frequent the joint. I wolfed down four delicious courses. It was decent tucker. I walked it off with a three mile hike to Colwick village. The evening was taken up with a vicious game of Monopoly. My strategy was scattergun, a little like the tight-permed Pies' manager Ricardo Moniz in the transfer market.

I've lost any sense of what day it is. I'm reminded it's Monday. I peruse yesterday's Non League Paper. We don't fancy travelling afar after a tiring day at Anfield on Boxing Day. Blog legend Trumpy is already booked into the Premier Inn at Royal Tunbridge Wells. He'll be knocking them back at two a penny at J D Wetherspoons' Opera House in the town centre.

I quite like the United Counties League at Step 5 in the Non League Pyramid. I've spotted some good young talent in the past. One of those, Dan Holman, has been hitting the onion bag with increased regularity for Woking in the Conference this season. Harrowby United, based in Grantham, are entertaining Sleaford Town in a local derby. 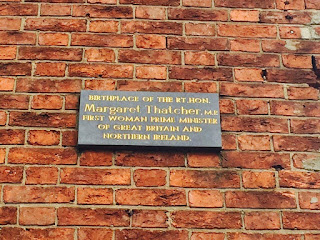 I'm nursing a slight hangover, following a session last night in the Meadow Covert, in Edwalton. I bumped into an old work colleague Vikas, who had returned to the pub following an early doors session for Forest v Dirty Leeds game on Sky. We have a giggle and a catch-up from our days at Impero Software. I really miss the guys there.

I'm flicking through the 2016 Good Pub Guide as Ms Moon cruises down the A52. The Blue Pig is an entry in the GPG. First port of call is the corner of North Parade, in Grantham town centre. It's now a chiropractic clinic. 90 years ago it was a grocers and the birthplace of Margaret Hilda Thatcher - aka the Milk Snatcher. I take a snap of the plaque high up on the wall. We park in the old town, next to the Old Angel and Royal Hotel, a 600 year old historic inn.

Ms Moon desperately rummages around in her handbag looking for a lighter. After what seems an age, she finally unearths one. She furiously flicks her thumb repeatedly against the flint in an attempt to spark up a fag. It's an epic fail. She stomps off up the road to Lidl to buy five for a quid. I'm nicely settled in a corner of the bar at the Blue Pig. I neck a Timmy Taylor's and devour a cheese and tomato cob. Harrowby's Environcom Stadium, on Dickens Road, is only five minutes away. 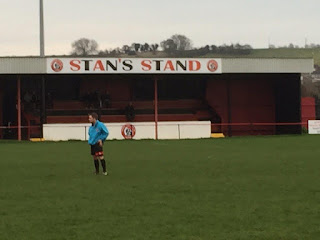 The Club were formed in 1949 and are nicknamed The Arrows. I recognise one of their joint managers - Nicky Anderson - from my time scouting with Notts County. He knows this patch of Lincolnshire like the back of his hand, and won't be afraid to throw some young uns in.

It's £5 on the gate and £1 for a information-packed programme. I use the term 'gate' loosely as we squeeze through a packed bar, and pay our monies to a guy sat at a table close to the exit door into the ground. I'm not that taken with the stadium. There are some nice touches though, such as Stan's Stand on the far side of the ground. This is named after former groundsman Les Staniland.

Ms Moon points out to me a memorial bench. I wander over. A plaque reads 'In Loving Memory of Danny Walsh.' Researching on the internet, later, I discover the desperately sad story behind Danny's untimely death. He was walking back from the Club one night with his partner and two year old little girl, when he stopped to complain about noise coming from a neighbouring party. He died from severe brain injuries after being kicked in the head. Two brothers were later acquitted of murder at Lincoln Crown Court. 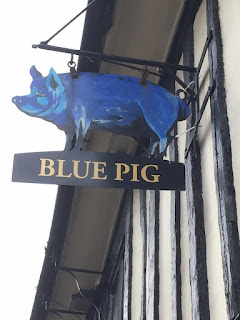 The visitors, Sleaford Town, have also had their share of bad luck. In August 2014, there then manager, Kris Jones, was involved in a serious car accident on the A1 - he was left with life-threatening injuries. He suffered a punctured lung, broken ribs, broken arm, a C7 vertebrae fracture and a severe brain injury.  After 11 months in hospital he was finally able to return home. I met his mum and dad once at Sleaford, they are lovely people. I wish him all the best on his road to recovery.

We stand next to a group of raucous men, who seem to have over-cooked it on the ale. Sleaford are awarded a free-kick around 35 yards out and close to us. A wind-assisted ball is whipped in, catching the 'keeper unaware and off his line. It evades his waving hand and ends up in the back of the net. The Arrows deservedly restore parity a few minutes later with the excellent Danny Durkin rounding the 'keeper before sliding the ball into an empty net. 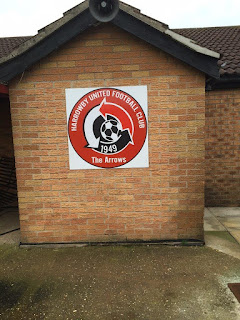 It's an action-packed first half, with the young ref doing well to keep a lid on it, as the tackles go flying in. The impressive Durkin, who has teased and tormented the Sleaford back four, doubles his tally for the day early in the second half. Ten minutes later he jinks his way down the wing like a young Peter Beardsley, before unselfishly releasing the ball for Wilkinson to put the game to bed. Sleaford complete a miserable day by blasting a penalty high over the bar and into the nearby housing estate.

Footnote: 18 year old Danny Durkin has scored 18 goals in the United Counties League. He is a first year student at Loughborough University, who play at the same level as Harrowby United. He has not been selected for any of the four University teams. *emailing Head Coach to ask why*

Man of the Match: Danny Durkin