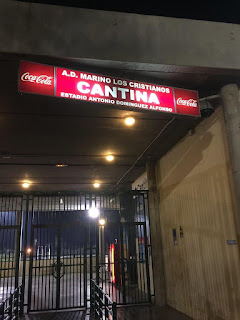 It's 2:55am on Thursday 4th February. A bleary-eyed Sticky Palms rises from his pit, trudges down the stairs and flicks the kettle on. Ms Moon and I are due to fly out to Tenerife from Birmingham Airport at 7:00am, a strong cup of Nescafe Alta Rica is needed.

I click the seat belt in as soon as I board the aircraft. I'm petrified of flying, which is mainly down to problems with my ears. I can't console myself with the Non League Paper to bury my head in, nor a stiff Bombay gin to calm my nerves. I immerse myself in the excellent book 'The Pie at Night' by the broadcaster Stuart Maconie as the plane taxis the runway. Just over four hours later we touchdown on Spanish soil.

Those Spanish baggage handlers don't muck about. I soon spot our suitcase doing a lap of honour on the baggage carousel. We've just got to wait for Ms Moon's bag, which contains all her clothes, and then the holiday can begin. Five minutes later, I suddenly turnaround and notice that all the passengers have dispersed towards the exit signs, where coaches and taxis await their arrival. Ms Moon and I stand alone, staring at an empty conveyor belt in disbelief. 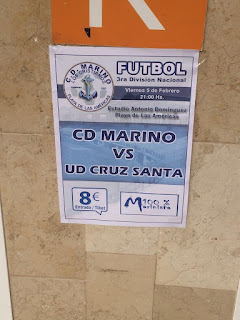 We chance upon a Ryanair customer service representative, her English is about as good as my Spanish. We've already missed the connecting coach to the resort of Los Cristianos. A distraught and inconsolable Ms Moon is hanging around the lost luggage desk. By chance she bumps into the comedian Paul Whitehouse who is collecting a vehicle from Hertz Car Rental. If I had a sense of humour I'd approach him to see if he could wing a bit of Aviva Insurance for us for the lost baggage. But those bungling fools at Ryanair have already put a damper on the day.

I blow a gasket with the Ryanair rep, departing with flailing arms before jumping in a taxi and checking into our hotel. There's no point in returning to the hotel to change for the evening session, so we trawl the bars and restaurants of Playa de las Americas on an old-fashioned pub crawl. I awake the next day with a delicate and fuzzy head. I'm 52 years old today. I unwrap a few presents which include CAMRA membership, which will come in handy now that I live in Nottingham.

Through my drunken haze I remember pointing out a poster in a bar overlooking the marina in Los Cristianos that was advertising a Division 12 game in the Canary League that kicks off this evening at 9pm. Ms Moon buys me a new Olly Murs straw hat as a treat for my birthday, after I have strutted the catwalk in every hat shop in town. 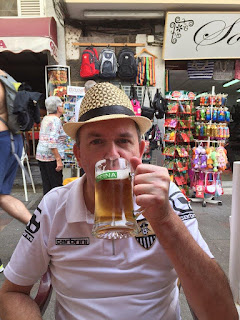 We watch a jaw-dropping sunset, whilst drinking cocktails, in a funky beach-side bar. The taxi drops us outside the Columbus Hotel opposite two football grounds. It's the HQ for White Van Man and Bruiser on their frequent sojourns to 'the Reef.' A youth game is taking place on a 4G surface. I race up the stairs to see a free kick floating into the top corner of the net. Sticky P doesn't do 3G or 4G. He never will.

We wander through a ropey area of town before climbing the steps up to Linekers Bar. It's not my bag to be honest. I couldn't give a toss about the feuding brothers. I mention to the lass behind the bar that it's a bit quiet in here. "We've just opened up, Love." 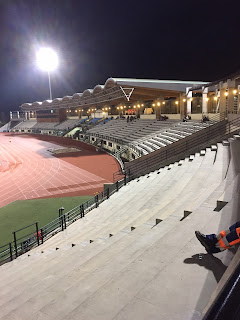 I fancy a gleg at the pre-match build up. We pay 8 Euros each at the ticket office. I'm drawn to a lady who is selling club merchandise set up on a trestle table. We buy a mug, T-Shirt and baseball cap for less than 20 Euros. The lady is charming and extremely helpful. We purchase a couple of raffle tickets for two Euros. I ring Finley the rabbit back in the UK for a score prediction. It's past his bedtime, he's none too chuffed. "0-0" he says, before the line goes dead.

The ground isn't anything special. I had others lined-up in the south of the island, but they were all away from home this weekend. The eight lane running track in the municipal sport stadium reminds me of Grantham Town. Some obsessive groundhopper with a loud mouth from Manchester tries to explain the League structure to me. I switch off to be honest.

I get chatting to a man and wife who are Northern Ireland fans. They are both sporting the blue away strip, and are looking forward to Euro 2016 in the summer. We grab a beer and plonk ourselves on top of a concrete step that gives you a panoramic view of the ground and resort. 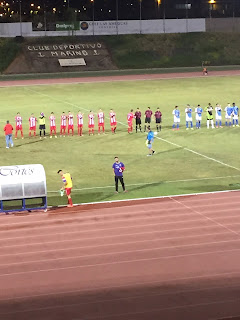 Tenerife is the largest of the seven Canary Islands. It has a population of 900,000. Five million tourists visit each year. The volcano Mount Teide is the third largest on the planet. The worst commercial aviation accident in history happened on the March 27th 1977 when two Boeing 747 planes collided in fog as thick as pea soup on the runway at the airport in the north of the island. 583 people lost their lives that day. According to wikipedia it was due to a catalogue of errors and misfortune.

On a brighter note, Chelsea winger Pedro was born in Tenerife's largest city, Santa Cruz. His youth career was spent at local club San Isidro. He was spotted and snapped up by La Liga giants Barcelona. A sell on clause in his contract provided his local team a £320,000 windfall last summer when Chelsea shelled out £23 million for the winger.

The game is as I expected it to be. The tempo is snail's pace. Any slight contact between players and suddenly you hear the loud shrill of the referee's whistle, followed by the wave of a yellow card. Steve Bruce and Larry Lloyd would spend the entire season in front of the Spanish FA. The play-acting of the visiting team beggars belief, particularly after they have taken the lead against the run of play. 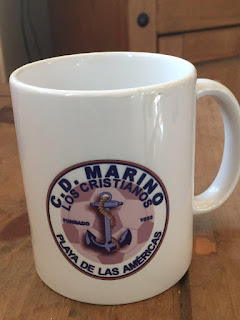 We've had bugger all to eat since breakfast and have sunk a boatload of ale. A beaming Mooney returns from the bar clutching a hot chicken baguette wrapped in tinfoil. The second half is no better. CD Marino grab a deserved equaliser, and could easily have gone on to win the game as their left back time and time again pushes the ball past his opponent before producing wicked crosses that flash across the six yard box, with no one having the inclination or energy to meet the ball.

We've a Cockney sat behind us with a voice like a foghorn. He commentates on the game and keeps shouting 'Come on Mourinho.' He has a raucous laugh and thinks his gag is hilarious. The small gathering of Brits are embarrassed for the bloke.

The referee finally calls time on this dull affair. He'll spend most of the evening writing his match report after brandishing 10 yellow cards - there's not been one bad tackle all evening.

Man of the Match: Manuel, the left back (Hope Billy Davies had a scout there)