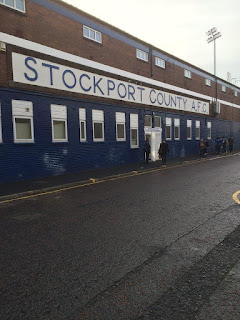 In a moment of spontaneity, we decide to spend the weekend in Manchester. Hotels are as cheap as chips at this time of year. Ms Moon, following extensive research on the Web (during Death in Paradise) books us in at the Holiday Inn on Oxford Road for a bargain price of £68, including breakfast. We let the Friday morning rush-hour traffic fizzle out, before hurtling down the A50 and up M6 towards Manchester. I'm sick to the back teeth of this road, having spent two days this week up in Chester, Lancaster and Ulverston - the birthplace of the English comic Stan Laurel.

Ceasefire papers are signed. We're soon sinking a few drinks at a number of top notch hostelries in the city centre including: Sinclair's Oyster Bar, Ape and Apple, Knott and Oast House. We dine in the evening at the wonderful Italian restaurant Don Giovanni, where we are made so welcome by Enzo, the manager for the last 20 years. We wash the meal down with more real ales and Manchester music on the jukebox at the Peverill of Peak. 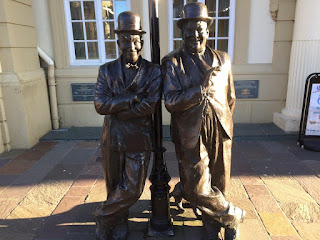 The hotel room is freezing, despite the air con throwing out hot air. My teeth are still chattering at the breakfast table as I crunch on my toast and jam whilst watching the awful scenes unravel in Burkina Faso. The journey to Stockport town centre is a short and uneventful. I leave Ms Moon to spark up a cigarette, as I run up the stairs into Stockport Library. I browse the 'Crime Fiction' section to see if any of my late father's detective thrillers are on the shelves - sadly they're not. We head out of town. Ms Moon's Uggs traipse through a puddle of vomit that covers the pavement. I would say the guilty party had Coronation chicken for supper.

Stockport lies 7 miles south east of Manchester. It has a population of 136,000 and sits on the river Mersey. I admire the Stockport Viaduct, which was built in 1840, and has 27 arches. It often featured in the background of L.S. Lowry paintings. Famous celebrities from the area include: TV presenter Tess Daly, footballers Tom Ince, Adam Le Fondre and Paul Warhurst, Carry On star Peter Butterworth, ABC lead singer Martin Fry, boxer Ricky Hatton, antiques expert David Dickinson, Wimbledon champion Fred Perry, and my lad's favourite, Michelle Keegan. Robinsons Brewery is situated in the town. Dizzy Blonde is Sticky P's favourite tipple.

We cross a busy main road, before entering the Crown, an open plan Victorian pub, with stylish decor. I enjoy a pint of 'Alchemist' pale ale. According to twitter Broad and Stokes are holding a 'swing clinic' at the Wanderers as South Africa collapse to 55-7. I engage in conversation with a Stockport fan who is propping up the bar. I josh with him that recently sacked manager Neil Young farmed out Hatters' striker Kristian Dennis on loan to Macclesfield Town without a return clause - he currently tops the scoring charts with 20 goals for the season. 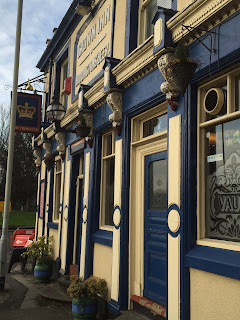 I bag a smart pair of grey Levi jeans on the precinct. They'll knock the tea ladies and barmaids of Non League football dead, when they're giving their first outing in the posh suburb of West Bridgford, Notts next weekend. Edgeley Park is only a short distance away. I squeeze the car into a space on a street close by. It's the worst piece of reversing since the Italian Army in World War Two.

Stockport County were formed in 1883 as Heaton Norris Rovers. They are nicknamed the Hatters after the once famous hat-making industry that employed so many folk in the town. Ground capacity is 10,841. Well known managers from the past include: The Uruguayan Danny Bergera, a trailblazer for foreign coaches to come, Champions League winner Dietmar Hamann, the gum-chewing Gary Megson, Dave Jones, Sammy McIlroy and Carlton Palmer. Record transfer fee received was £1.8 million from Middlesbrough for Alun Armstrong. Record transfer fee shelled out was £800,000 for Ian Moore from Nottingham Forest. The Club have recently fallen on hard times. Through mismanagement they somehow find themselves in the National North League, plying their trade against the likes of Boston United and Gainsborough Trinity. 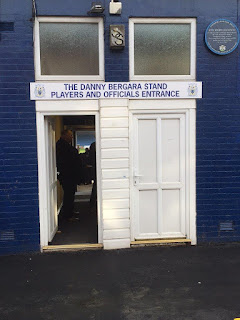 The ground is close to red-bricked terraced streets, it has an old school feel about the place. I buy two tickets at a window for the Danny Bergera Stand. They're £15 a pop; extortionate for the level of football we will be seeing. The programme, at £3, is informative and full of content.

Premium steak pies, peas and gravy are £3.50 each. A disinterested youth behind the counter says there isn't any mint sauce or vinegar. The ground is a little belter. It's unrecognisable from my previous visit over 30 years ago with 'The Lincoln.' I remember Imps' manager Colin Murphy wearing a Sherlock Holmes deerstalker cap, complete with cape, checked baggy trousers and boots.

Nuneaton are managed by former Chelsea and D**y County striker Kevin Wilson. He is assisted by Steve Chettle. Wilson has an eye for a player. He sold on many from his previous club, Ilkeston FC. One of them, Che Adams, who has scored for fun at Bramall Lane is being courted by a host of Premiership clubs. 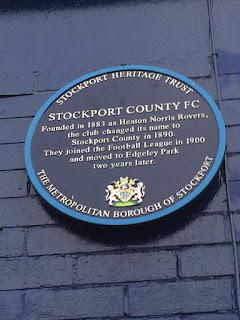 Having winced at the pre-match music, which includes Take That and Shania Twain, events take a turn for the worse when the teams walk out to 'Snoopy Vs the Red Baron.'  The PA guy announces that it's a no smoking stadium - Ms Moon has a face like she's just sucked on a lemon.

The Hatters look short on confidence. Club legend, Mike Flynn, who made over 450 appearances for Stockport, has been installed as caretaker-manager.  Ray Wilkins would slot in nicely into their midfield with it's crab-like sideways movement. The visitors pump the ball forward early to their big unit, Rob Duffy, who has excellent hold-up skills. Their 'keeper, Jordan Smith, is pinpoint with his kicking. A silly free kick is given away, it's pumped high into the box, Duffy's header loops over a stranded 21 year old debutant 'keeper, and trickles into the net.

Nuneaton remain on top, with Morgan and Byrne dominant in midfield. Callum Chettle, son of Steve, has caught my eye. He has a trick or two, some pace too, but is a little shy in the tackle. 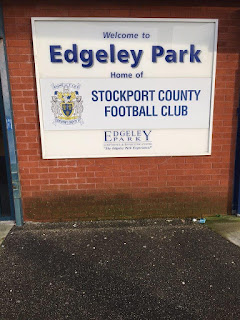 Half time entertainment sees a supporter ping a ball onto the crossbar twice in succession to win £100 worth of vouchers for Frankie and Benny's. There's a wonderful spirit about Stockport County. Nearly 3000 people have come through the gate.

Nuneaton are going through the motions in the second half, as they try to stitch up the game. There are a flurry of substitutions, one of which is a game-changer. Wilson removes Duffy from the attack and throws on comedy genius Marlon Harewood - once of the parish of Nottingham. Marlon is now a 'Bespoke Vehicle Provider.' He still has the touch of a baby elephant and the football brain of a headless chicken.

Suddenly the ball stops sticking, now Duffy is gone. Stockport get on the ball and pass with purpose. On loan Everton striker Delial Brewster races onto a through ball, rounds Jordan Smith, and fires home the equaliser. Nuneaton look shaken, but manage to hang on for a draw, despite dominating possession for most of the game.

Man of the Match: Rob Duffy